Muhammad Ali, considered to be the greatest heavyweight boxer, died late Friday night in a Phoenix-area hospital at 74 years old. 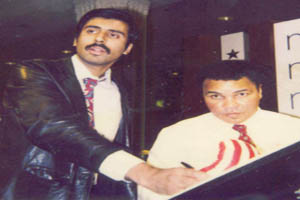 Below is a list of Quotes ,by Muhammad Ali.

“Float like a butterfly, sting like a bee. His hands can’t hit what his eyes can’t see. Now you see me, now you don’t. George thinks he will, but I know he won’t.

“Service to others is the rent you pay for your room here on earth.”

“If my mind can conceive it, and my heart can believe it—then I can achieve it.” Jesse Jackson said this as early as 1983, according to the Associated Press, and Ali used it in his 2004 book.

“It’s hard to be humble when you’re as great as I am.”

“It isn’t the mountains ahead to climb that wear you out; it’s the pebble in your shoe.”

“If you even dream of beating me you’d better wake up and apologize.”

“Braggin’ is when a person says something and can’t do it. I do what I say.”

“I am the greatest, I said that even before I knew I was.”

“Only a man who knows what it is like to be defeated can reach down to the bottom of his soul and come up with the extra ounce of power it takes to win when the match is even.” 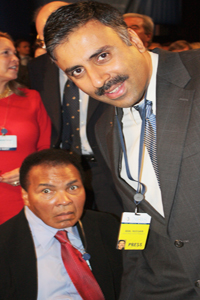 How Muhammad Ali Touched my life.

When I was a kid growing up in England, me and my family watched all the boxing fights of  Ali  and that was how I got  involved in Boxing , watching the “Greatest”  and went on to make history myself winning the title as The Greatest Indian, Paki and Bangla fighter in the World.

Ali was just not the greatest boxer of all time, he was a humanitarian, Poet ,Advocate and more, he was great role model for many ,lived a clean honorable life as he was on this earth.

I met Muhammad Ali, on 3 Occasions here in the USA, first time was Approx  23 years ago at an event in Macy, s NYC he was launching a piece of Clothing, then in the early 90’s where he debuted his Book at The BWAA  and the last time I met him was approx 3 years ago , at The Clinton Global Summit here in New York, City alongside his wife Lonnie Ali.., I had the pleasure of speaking with Lonnie at the event for 20 mins in the Lobby area about Ali, and how he had inspired me as a kid and how I got involved in boxing ,because of him, she was very gracious  talking to me, Ali was in his room and I told Lonnie I would like to meet him, and she told me it was not possible because of The Medicine Ali was taking and needed to rest. 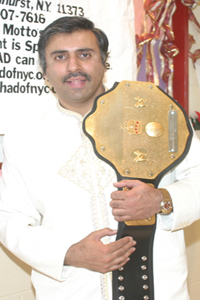 Dr.Abbey ,The Greatest Pak, Ind Fighter in the World Belt

So she told me to come the next day very early outside there hotel room and she will introduce, me to him , so Lonnie was very gracious and left me her Cell number, which I still have in my Cell phone. So when I got to the hotel I called Lonnie, and she told me to come up and wait outside, as she helped  Ali outside, and I Greeted Ali , in a Muslim Greeting his eyes focused ,as Lonnie introduced me to the Greatest, at that time I could not believe what was happening, meeting the Greatest and having a conversation with him, I spent 1 Min Approx Speaking with Ali, and took a pic with him. 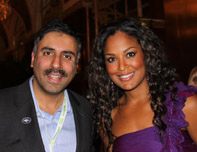 Thanks to Lonnie Ali, who made that possible it was the greatest movement in my life ,spending a minute  with the Greatest, I will never forget that for the rest of my life.

There will never be another Muhammad Ali, in my lifetime or maybe ever, My Friend , Muslim Brother you will be deeply missed , but never forgotten as I have your Picture enlarged and put up in my office, and it will not be coming down anytime soon.

May Allah Bless you and provide Heaven for you, for what you did in this world for all humanity.., Rest in Peace.