The Boxing Writers Association of America is pleased to announce that its Sugar Ray Robinson 2015 Fighter of the Year is Floyd Mayweather Jr. This is the third time that “Money” has taken the BWAA top honors. The other times were in 2013 and 2007.

He and other award winners will be recognized at the 91st BWAA annual awards gala at a date and time to be determined. Mayweather becomes a three-time BWAA Fighter of the Year-award winner, joining a prestigious group that includes Muhammad Ali, Joe Frazier, Sugar Ray Leonard, Evander Holyfield and Manny Pacquiao. It’s the third time in the last nine years that Mayweather has been awarded Fighter of the Year.

Mayweather (49-0, 26 KOs) won two times in 2015, adding Pacquiao’s WBO welterweight title, to the WBC/WBA belts he already owned in the highest-grossing prizefight of all-time on May 2 in Las Vegas. He announced the retirement of his illustrious career after beating Andre Berto on September 12. Both of Mayweather’s victories were typically one-sided unanimous decisions. Floyd Posing with his BWAA Medal

Floyd  Mayweather Jr. is an American former professional boxer and current boxing promoter. Widely considered to be one of the greatest boxers of all time, undefeated as a professional, and a five-division world champion, Mayweather won twelve world titles and the lineal championship in four different weight classes (twice at welterweight). He is a two-time winner of The Ring magazine’s Fighter of the Year award (1998 and 2007), a three-time winner of the Boxing Writers Association of America (BWAA) Fighter of the Year award (2007, 2013, and 2015), and a six-time winner of the Best Fighter ESPY Award (2007, 2008, 2010, 2012, 2013, and 2014). BoxRec currently rates Mayweather as the sixth best pound for pound fighter of all time and the greatest welterweight of all time. In 2016, ESPN ranked Mayweather as the greatest pound for pound boxer of the last 25 years.

Many sporting news and boxing websites rated Mayweather as the best pound for pound boxer in the world twice in a span of ten years, including The Ring, Sports Illustrated, ESPN, BoxRec, Fox Sports, and Yahoo! Sports. Mayweather topped the Forbes and Sports Illustrated lists of the 50 highest-paid athletes of 2012 and 2013 respectively, and the Forbes list again in both 2014 and 2015, listing him as the highest paid athlete in the world. In 2007, he founded Mayweather Promotions, his own boxing promotional firm after defecting from Bob Arum’s Top Rank. 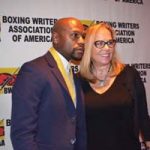 Floyd with his Publicist Kelly Swanson 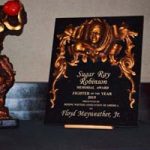 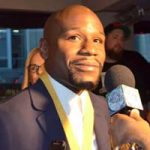