Thousands of nurses went on strike Monday at two of New York City’s major hospitals after contract negotiations stalled over staffing and salaries nearly three years into the coronavirus pandemic.

The privately owned hospitals were postponing nonemergency surgeries, diverting ambulances to other medical centers, pulling in temporary staffers, and assigning administrators with nursing backgrounds to work in wards in order to cope with the walkout. 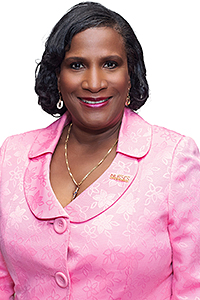 As many as 3,500 nurses at Montefiore Medical Center in the Bronx and about 3,600 at Mount Sinai Hospital in Manhattan were off the job. Hundreds picketed, some singing the chorus from Twisted Sister’s 1984 hit “We’re Not Gonna Take It,” outside Mount Sinai. It was one of many New York hospitals deluged with Covid-19 patients as the virus made the city an epicenter of deaths in spring 2020.

“We were heroes only two years ago,” said Warren Urquhart, a nurse in transplant and oncology units. “We was on the front lines of the city when everything came to a stop. And now we need to come to a stop so they can understand how much we mean to this hospital and to the patients.” 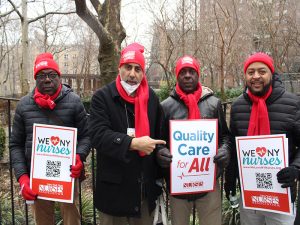 The union for nurses, the New York State Nurses Association, said they had to strike because chronic understaffing leaves them caring for too many patients.

Jed Basubas said he generally attends to eight to 10 patients at a time, twice the ideal number in the units where he works. Nurse practitioner Juliet Escalon said she sometimes skips bathroom breaks to attend to patients. So does Ashleigh Woodside, who said her 12-hour operating-room shifts often stretch to 14 hours because short staffing forces her and others to work overtime. 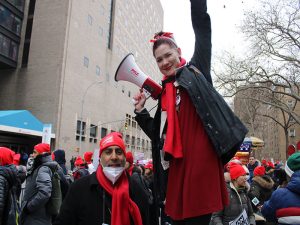 “We love our job. We want to take care of our patients. But we just want to d it safely and in a humane way, where we feel appreciated,” said Woodside, who has been a nurse for eight years.

The hospitals said they had offered the same raises — totaling 19% over three years — that the union had accepted at several other facilities where contract talks reached tentative agreements in recent days. 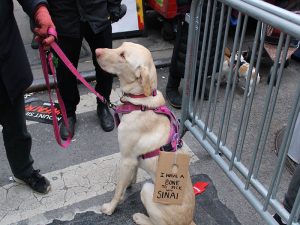 I have a bone to pick with Mount Sinai !

Montefiore said it had agreed to add 170 more nurses. Mount Sinai’s administration said the union’s focus on nurse-to-patient ratios “ignores the progress we have made to attract and hire more new nurses, despite a global shortage of healthcare workers that is impacting hospitals across the country.”

The hospitals said Monday that they had prepared for the strike and were working to minimize the disruption. 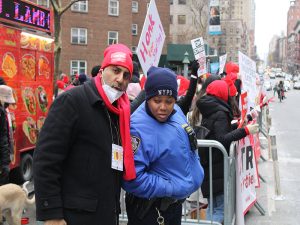 “Enough is enough, Sinai,” New York State Nurses Association President Nancy Hagan said outside of Mount Sinai on Monday surrounded by red-clad nurses. “What we are asking for is for safe staffing and quality care for patients. We don’t think we are asking for too much.”

The hospitals said in separate statements on Monday that they offered a 19.1% compounded wage increase to the nurses. Montefiore Medical Center also said it was committed to create over 170 new nursing positions. 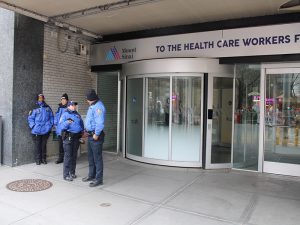 With the traumas of COVID still freshly seared into their minds, New York City nurses are once again sounding the alarm that staffing shortages at local hospitals are jeopardizing the well-being of themselves and their patients.

Nurses in the Big Apple and throughout New York State are planning a series of protests starting this week to highlight what they say is a failure on the part of hospitals to staff jobs that started to become vacant after the first pandemic wave roared through the region. 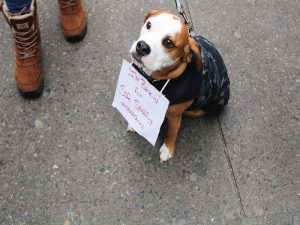 I am Barking for Safe Staffing

New York City Mayor Eric Adams said on Sunday that he and his staff were closely monitoring the situation and that the city’s healthcare system is prepared to meet any challenges that may arise due to the work stoppage.

Union officials insist they can’t accept a deal if it won’t fix the staffing issue. They say that the nurses are at a breaking point. 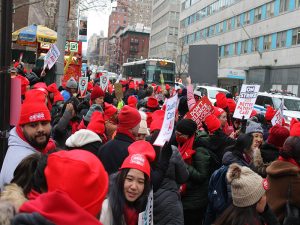 Hundreds of Protestors in attendance

“We are sick and tired of the hospital only doing the bare minimum,” said Danny Fuentes, a union official who spoke to the crowd Monday. “Time and time again we are forced to take unsafe patient loads. We are humans and we are burnt out. And we are tired. And the hospital doesn’t seem to care. All they see are profits. We don’t want to be out here. We would much rather be with our patients. We need a fair contract to protect our patients.” 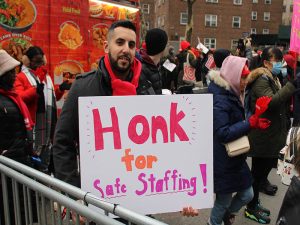 The Banner Says it all

Union officials appeared to be winning the public relations battle in this fight, with cars and trucks honking their horns in support of the strikers throughout the day. And the union officials were getting overwhelming cheers from crowd as well with their position that they were fighting to put patients over profits. 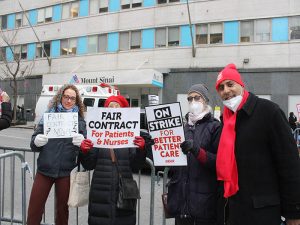 Let’s hope all parties get together as soon as possible and iron out the details and everybody is happy with the situation, as nurses are very important part of our health system and with the COVID Raging full force we need to have them back at work, right away. 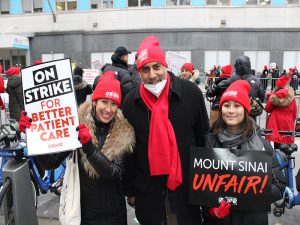