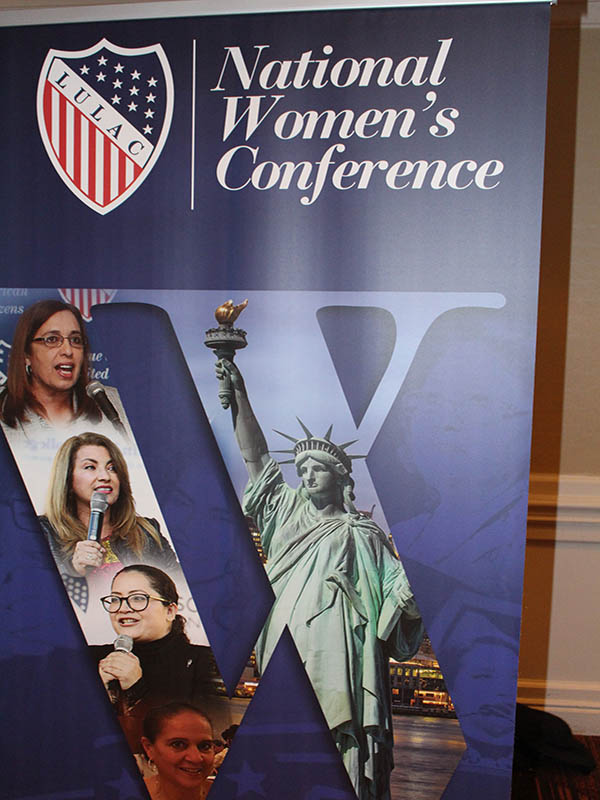 The League of United Latin American Citizens (LULAC) National Women’s Conference began with a who’s who political starting line-up of elected officials, appointed government officials, and hundreds of the top Latino influencers in the U.S. and Puerto Rico, all of them female. The conference theme is “Confronting Adversity, Overcoming Obstacles Through Resilience and Perseverance,” a tribute to LULAC’s triumph in holding its first national assembly in more than 20-months, the most extended period without a gathering of its members in the 92-year history of the organization. The conference is a prelude to the 2022 LULAC National Convention in San Juan, Puerto Rico.

“We have broken all turnout predictions and exceeded our goal by more than 300 percent!” exclaimed Elsie Valdes-Ramos, LULAC National Board Officer and Vice-President for Women.

“We are here to make sure that the voice of women is heard loud and clear across the nation and reaching millions of American citizens in Puerto Rico. Joining the women of LULAC are female mayors, cabinet secretaries, and many people of the island, along with our friends everywhere, including men, for this historic first where not even the pandemic could extinguish our faith, our spirit, or our strength in unity. 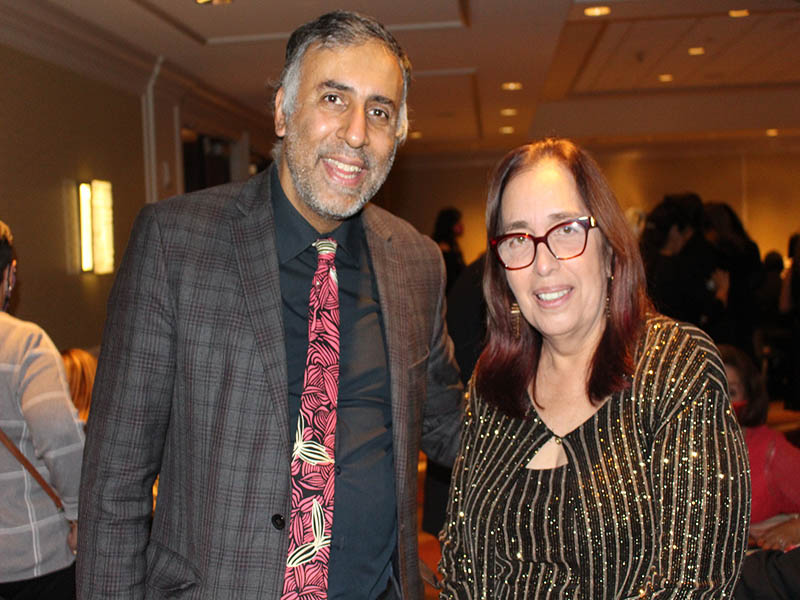 Moreover, we are here to extend a hand to all the women who could       not be here for various      reasons. For the women who did not join us because they think they do not have the education or have the status of those here, I say to them: “This conference is for every woman, whether she is at home or has a job outside the house.” There are women not with us today because of economic circumstances, distance, or a man telling them, ‘why do you want to be there? We say to all women: we will share the message of empowerment with any man, couple, significant other, or whoever you love. The essential news to share is that I am a woman and am the vital force of power in this nation!” added Valdes-Ramos.

Ralina Cardona, National Board Officer and Vice-President for the Northeast, reminded the audience:      “This pandemic has brought to light what the women in our community have always been doing. Not what (we) can do, but what we have always been doing. The pandemic brought forth the phrase ‘essential worker.’ We had never heard that before, the essential worker. The essential workers are our skin color, family, fathers, mothers, brothers, and sisters. They keep this country moving forward, fed, healthy, and our hospitals clean, and they are mostly women. We need to celebrate what we have done and teach the rest of our community to stand up. Our responsibility to our community is to make sure that they are there and we are there for them,” said Cardona. 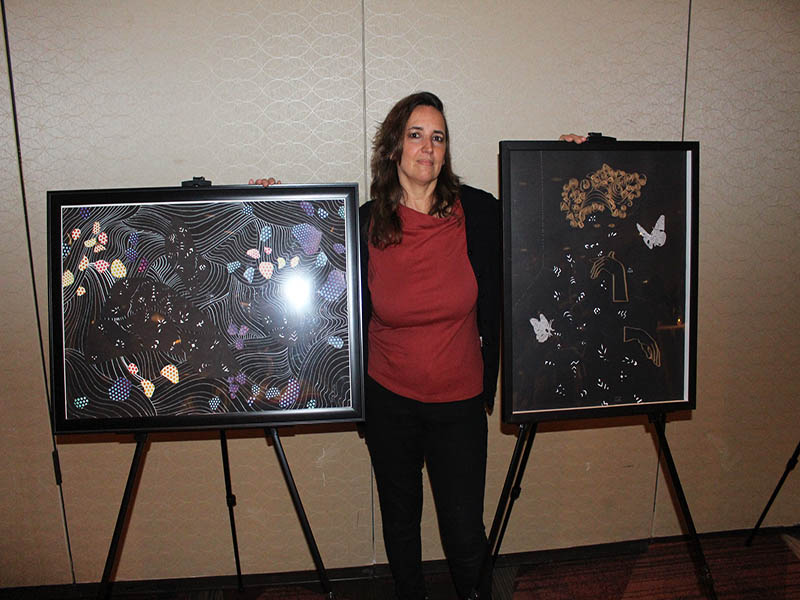 Domingo Garcia, LULAC National President, took the podium and issued a solid challenge to America’s leaders in Congress. He urged its elected members to hear the loud call-to-action by conference attendees on stopping violence against women. “It is always wrong for a man to hit a woman. And you know what’s worse? For a sitting Congressman like Rep. Paul Gosar (R-AZ) to threaten the life of a Latina congresswoman from New York City, Alexandra Ocasio Cortez! That’s not right. That’s a political coward and an intellectual dwarf. We’re asking Congress today that he be censured and expelled from the Congress of the United States of America. Threatening women and hitting women is wrong at every level, whether that’s at home or in the Capitol of the United States of America, and should not be tolerated by men, Republicans, or Democrats.” 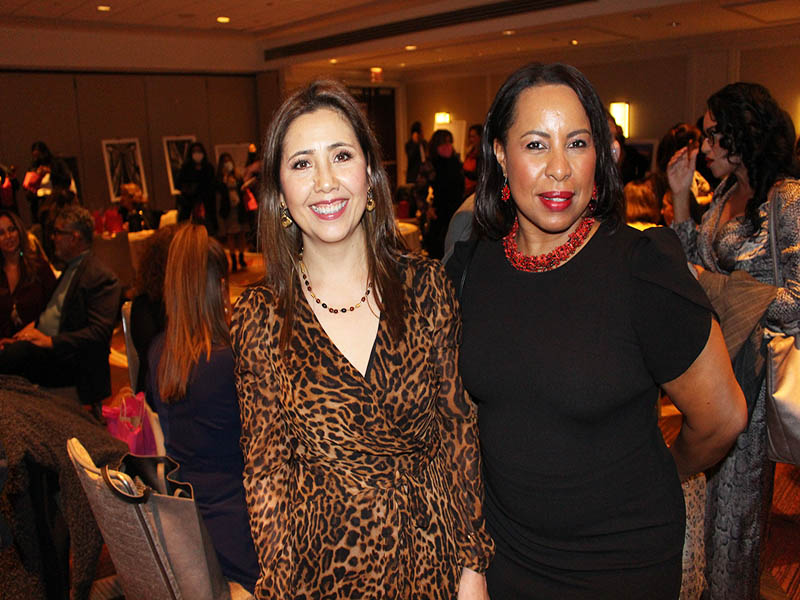 A welcome reception was held earlier in the day for the elected and appointed leaders attending the conference. Caridad Pierluisi is Special Envoy, and Assistant to the Governor of Puerto Rico, Pedro Pierluisi. Ms. Pierluisi, the governor’s sister, serves ad honorem without a salary or benefit and brought a message to conference attendees on his behalf. “ We are here as a delegation of women government cabinet members, mayors, and leaders of essential agencies to show the contributions we are making in all aspects and service to everyone.” 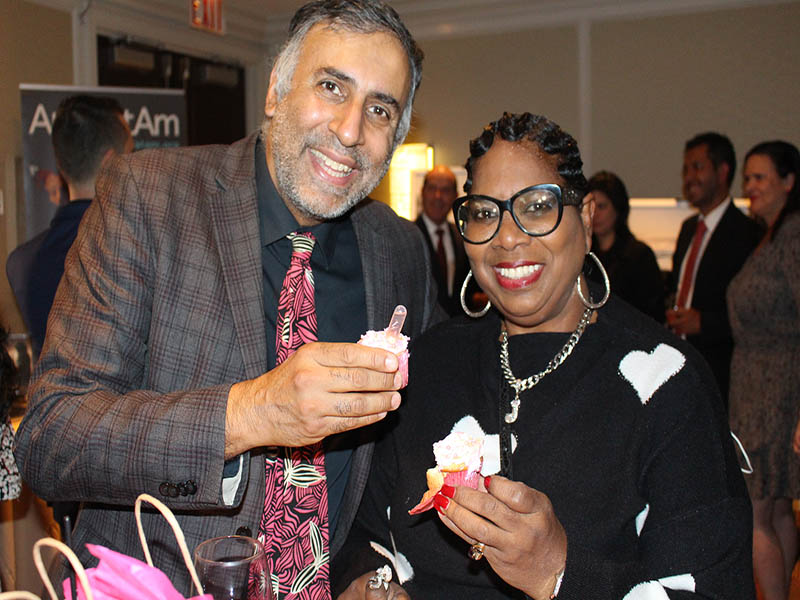 “We want people in the United States to know that Puerto Rico is a Latino state that will contribute to the entire economy, the fight for all rights, and we are working together. Puerto Ricans are U.S. citizens, just like every American on the continent. The people of Puerto Rico have spoken in an election. They made a valid decision, which was certified, and it says the majority wants to be part of the United States. We want the same responsibilities and benefits that every other American citizen has,” added Pierluisi.

Also present was Senator Nitza Moran Trinidad, an elected official who represents constituents in the island’s northeast region, including San Juan, a city with more than 335,000 people. “ We are very excited to be part of a movement of Latinas working together for equality and equity in all aspects of our society, including labor, social and economic. I think this is a great opportunity to highlight our positions and ensure that women keep moving upward in our times,” said Senator Moran Trinidad. 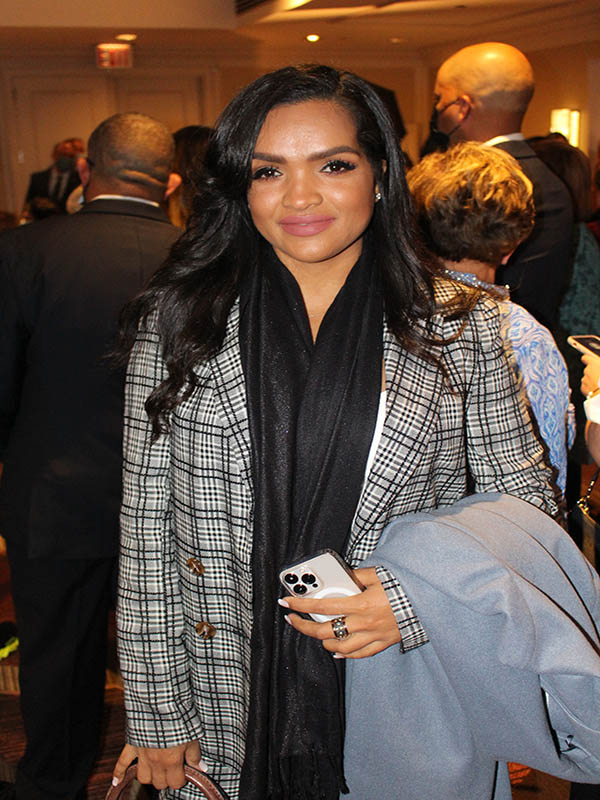 Foremost on the minds of many Latinos, both on the U.S. mainland and in Puerto Rico, is the economic recovery and rebuilding of the island in the wake of Hurricane Maria in September 2017, which claimed 3,000 lives and caused historic devastation. The natural disaster left more than $90 billion dollars in damage to critical infrastructure, including roadways, bridges, and other public service facilities. Swarms of destructive earthquakes followed Hurricane Maria and left thousands of families homeless. Eileen Velez-Vega is now leading the rebuilding. She is Secretary of Transportation and Public Works, the first woman ever to hold that position. 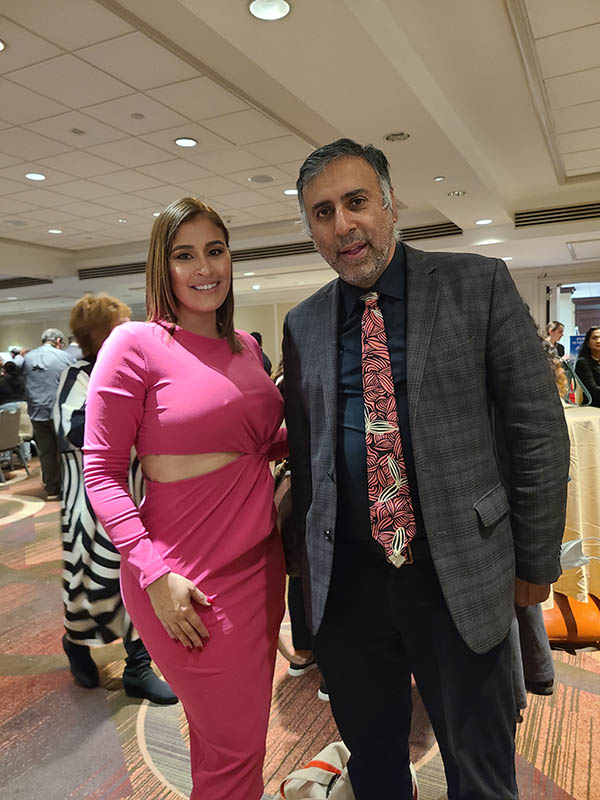 “ Our priorities with the FEMA monies received until now are roadways, bridges, and drainage systems,” says Velez-Vega. “ We started with 157 rebuilding projects, and we are now down to the final twenty projects to complete. Puerto Rico is receiving significant amounts of money to spend rebuilding emergency services first. Following this, we can now turn to permanent public works either in design phases or released for bids. The FEMA projects have taken about six months to complete designs, and we anticipate completing the work by mid-2022. People may not be seeing as much as they would like, but yes, we are completing projects.” 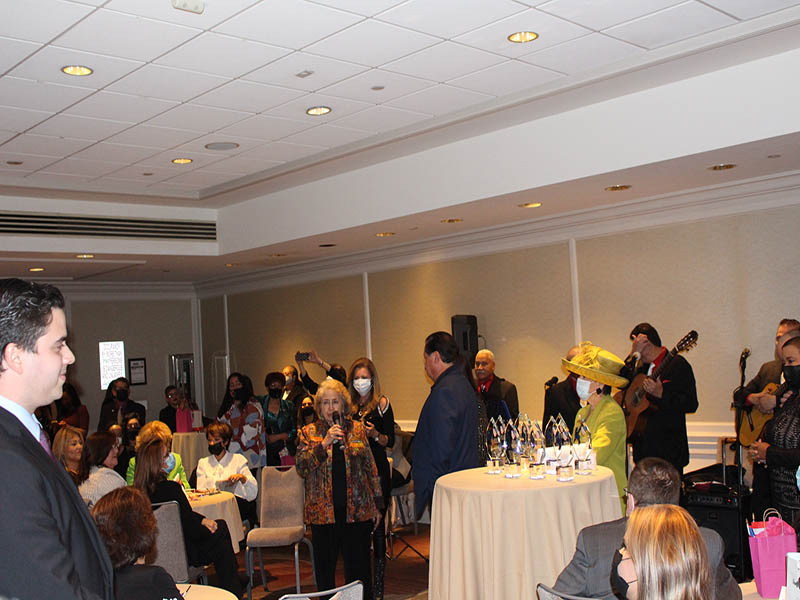 100’s of Woman Latina’s in attendance

“My life has always been in transportation. I live to engineer in the Army and the private sector, including airports and pavement construction. Years of lack of road maintenance in Puerto Rico exacerbated the situation. Governor Pierluisi and I are committed to changing that because it does not make sense to plan great new works if we cannot maintain what we have. This is a beautiful opportunity for me as the first woman, and I will not be the last,” adds Velez-Vega. 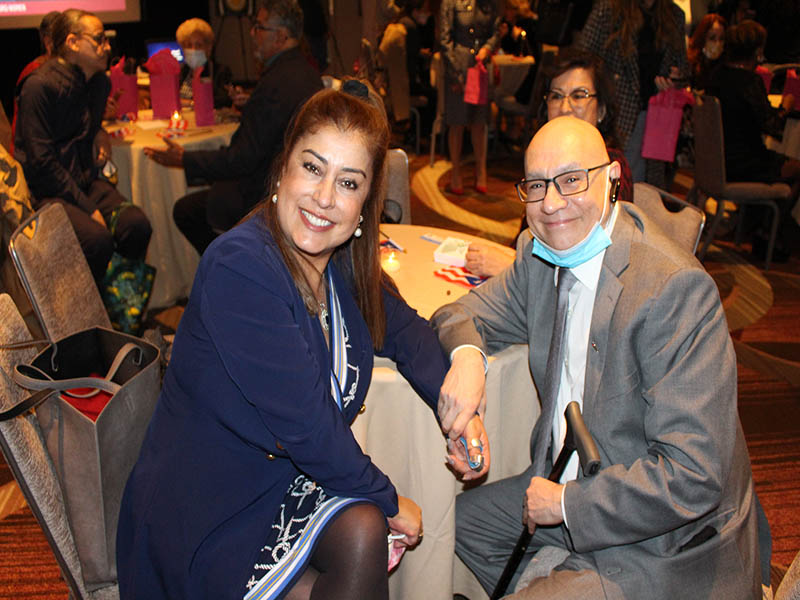 About LULAC: The League of United Latin American Citizens (LULAC) is the nation’s largest and oldest Hispanic civil rights volunteer-based organization that empowers Hispanic Americans and builds strong Latino communities. LULAC’s headquarters are in Washington, DC. The organization has more than 1,000 councils around the United States and Puerto Rico. LULAC’s programs, services, and advocacy address the most important issues for Latinos, meeting the critical needs of today and the future. 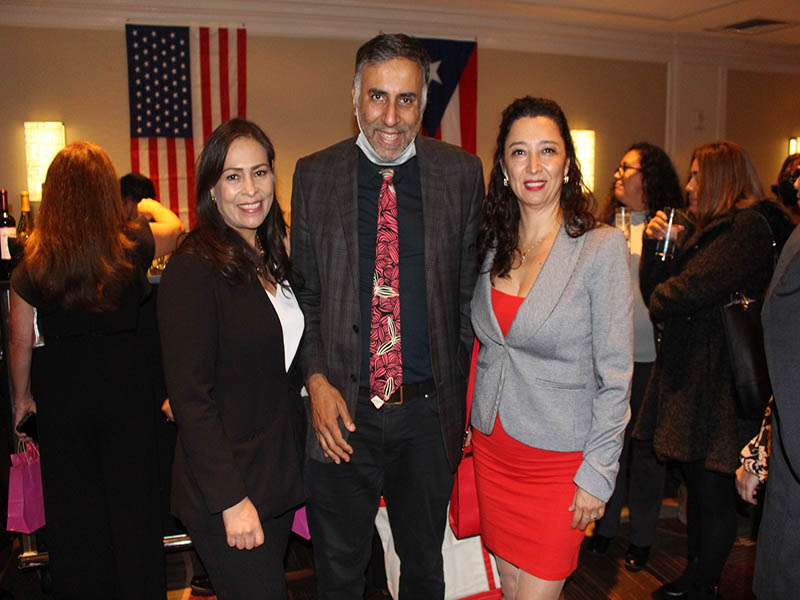