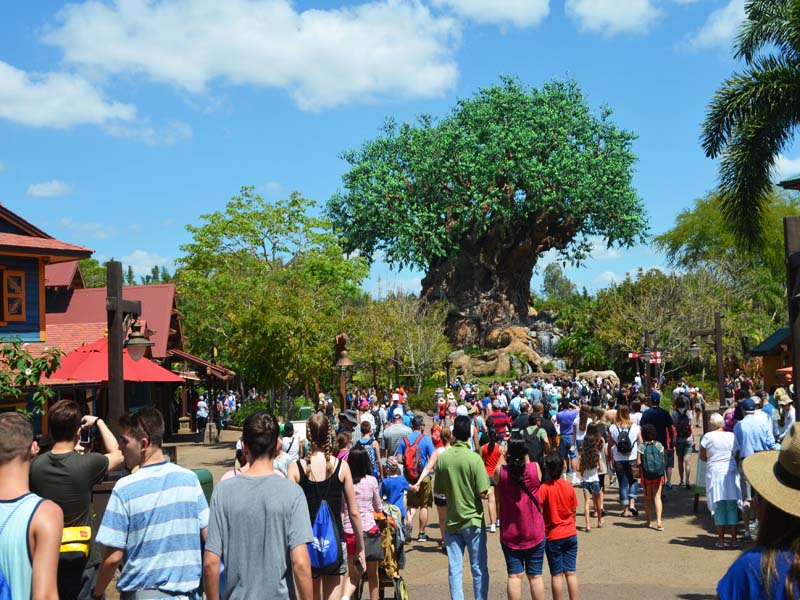 AK is a wholly zoological theme park, and is the largest theme park in the world (580 acres)! When conceived, AK was to focus on three broad classifications of animals: those that exist in today’s reality; those that did exist but are now extinct (dinosaurs); and those that only exist in the realm of fantasy! AK opened on Earth Day April 22, 1998, and is the newest completed WDW park themed entirely around the natural environment and animal conservation, a philosophy pioneered by Walt Disney. AK is accredited by the World Association of Zoos and Aquariums, in that it has met or exceeded the standards in education, conservation, and research. AK’s symbol is the Tree of Life. AK hosts10m+ visitors annually, the fourth-most visited amusement park in the US, right behind the other three WDW parks! AK is divided into six themed areas, notably Discovery Island, Africa, Asia, DinoLand U.S.A.  From parking, or off the Disney bus, enter Rainforest Café prior to entering The Oasis (main entrance), whose paths lead deeper in AK via Discovery Island. This is the center of the park, in the middle of the Discovery River waterway, the central hub connecting the other sections of the park.

The Tree of Life, the park’s sculpted, man-made 145-foot-tall 50-foot-wide Baobab tree, is surrounded by trails and animal enclosures. Beneath it lies It’s Tough to Be a Bug!, a wonderful 4D experience based on the 1998 Disney· Pixar  film “A Bug’s Life”. 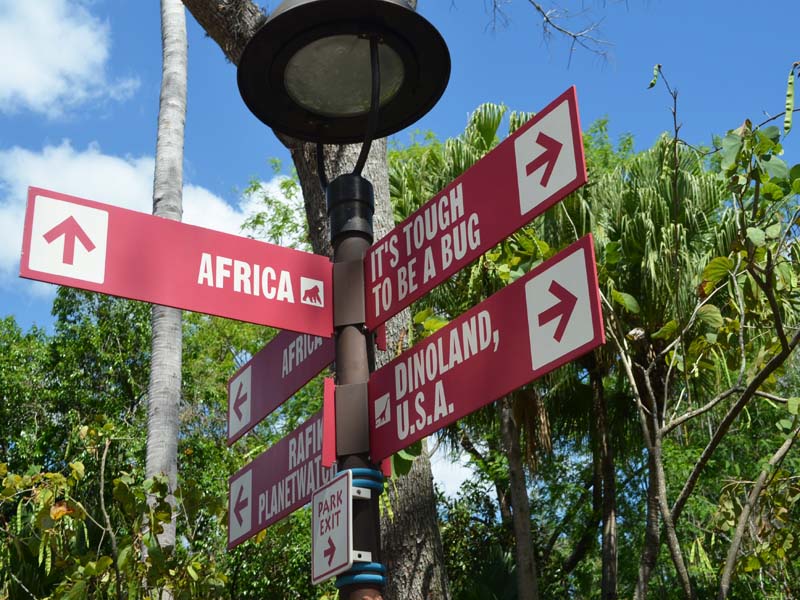 Asia, the first expansion of AK, opened in 1999. Comprised of two villages: a riverside Anandapur (India) and Serka Zong (foothills of the Himalayas). Anandapur is a center of animal research and tourism; while the focal point of Asia is Expedition Everest, a roller coaster through the Forbidden Mountain of the Himalayas where passengers encounter a Yeti. The Maharajah Jungle Trek leads guests through the forests and ruins outside the village, home to species such as bantengs, bar-headed geese, Bengal tigers, blackbucks, Eld’s deer, gibbons, flying foxes, Komodo dragons +50 bird species. Flights of Wonder is a live bird show in which Anandapur’s bird researcher educates a tour guide with a fear of birds about natural bird behaviors and the effects of habitat loss and conservation efforts on black crowned crane and bald eagle.

In between Asia and DinoLand U.S.A. on the banks of the park’s Discovery River is Rivers of Light, a nighttime show featuring mist screens, water fountains, floating lanterns, music, and lighting. DinoLand U.S.A. is themed around dinosaurs and extinct prehistoric life. The area features Primeval Whirl, a spinning roller coaster loosely inspired by the Dinosaur attraction, the TriceraTop Spin ride, carnival games and gift shops. At the eastern edge of DinoLand U.S.A. is the Theater in the Wild, which hosts Finding Nemo – The Musical, a live-action musical stage show based on the story of the Disney·Pixar feature film. 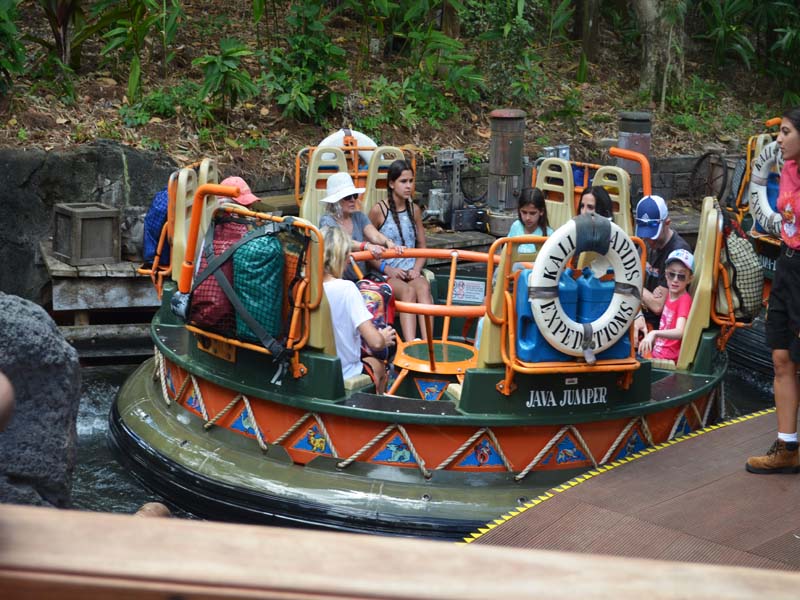 One of Many Rides at Disney’s AK

The animals, such as the American crocodile, red legged seriemas, Abdim’s stork and Asian brown tortoise, have evolutionary links to the age of the dinosaurs. They are animal species that have survived since the dinosaur era and can be found along the Cretaceous Trail along with a collection of Mesozoic plants.