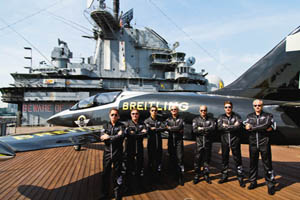 The Breitling Jet Team took a break from its 2016 American Tour this week to join fans at the Intrepid Sea, Air & Space Museum in Manhattan. As part of Fleet Week 2016, one of the team’s L39-C Albatros jets is on display on the flight deck for aviation enthusiasts to get a closer look at throughout the holiday weekend.

“The Intrepid Sea, Air & Space Museum is an iconic destination in Manhattan. To be able to have such a special display on its Flight Deck throughout Fleet Week is something really special,” Breitling Jet Team leader Jacques Bothelin said. “To have one of the Breitling Jet Team’s L-39 Albatros Jets on display among some of the country’s most well-known aircraft is truly remarkable.” 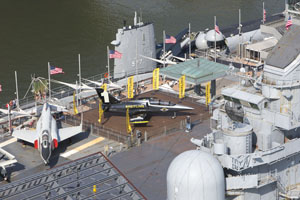 A Breitling Aerobatic Team L-39 aircraft surrounded by yellow Breitling flags sits on the deck of the Intrepid Sea Air and Space Museum in New York City May 25, 2016

“As a U.S. Navy captain, the chance to share my passion for aviation is one that I look forward to very much,” said Kelly. “It is a true honor to be here with Breitling to celebrate Fleet Week this Memorial Day weekend.”

Fleet Week New York is now in its 28th year and is a time-honored celebration of sea services. It offers the citizens of New York City and the surrounding tri-state area the chance to meet Sailors, Marines and Coast Guardsmen while witnessing first-hand their capabilities. The weeklong celebration is a tradition that has been observed every year since its inception in 1984. 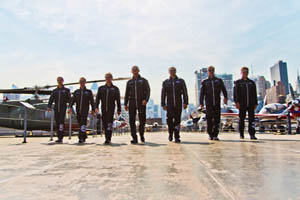 On May 28 and 29, the Breitling Jet Team performed at the Bethpage Air Show at Jones Beach State Park in Long Island before continuing their American Tour with another air show performance this week at the Great Tennessee Airshow in Smyrna, Tenn.

See More in our Luxury Channels

ABOUT BREITLING: A specialist of technical watches, Breitling has played a crucial role in the development of the wrist chronograph and is a leader in this complication. The firm has shared all the finest moments in the conquest of the skies thanks to its sturdy, reliable and high-performance instruments. One of the world’s only major watch brands to equip all its models with chronometer-certified movements, the ultimate token of precision, Breitling is also one of the rare companies to produce its own mechanical chronograph movements, entirely developed and manufactured in its own workshops. This family business is also one of the last remaining independent Swiss watch brands.