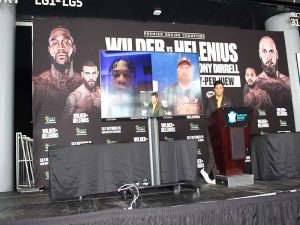 Wilder and Helenius Talking Via Satellite hook up for Press Conference

Tickets for the event, which is promoted by BombZquad Promotions and TGB Promotions, are on sale now available for purchase in-person at the American Express Box Office at Barclays Center.

Here is what the press conference participants had to say Tuesday from Barclays Center: 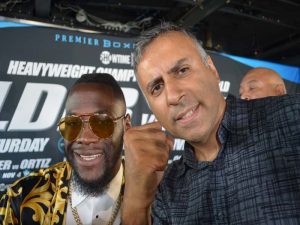 DEONTAY WILDER: “We’ve put in over 400 rounds so far and training camp has been great. I’m trying to do something different with adding Don House to the team working in Las Vegas. We wanted to change up some things, go more rounds and see what happened.

“This training sounds like it could be a lot on your body, but when you’re in shape physically and mentally, nothing is impossible. “I’ve had a great career and now I’m back again for my second reign. It’s amazing to reminisce about all the years and about how I got to where I am now. It’s been an honor. We had a gameplan and we executed that game plan.

“I’m looking forward to October 15 and sharing the ring with Robert. I highly respect Robert and his team. We’ve always had a connection, but unfortunately in this business, you have to go against each other sometimes. But make no mistake, just because we know each other, it doesn’t mean this fight won’t be interesting. 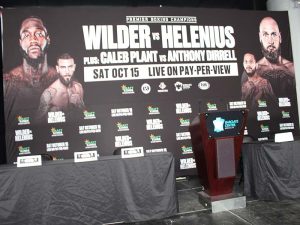 “Every time I fight, you’re on the edge of your seat, because I’m going in there 110%. I’m looking forward to this fight and coming back to Barclays Center, where some of my most exciting knockouts have occurred. I have remarkable memories there and I can’t wait to display my talent.

“I know what Helenius is capable of doing and I know what kind of heart he has. He’s coming to bring his best and I always bring mine. This is a serious fight between two warriors in the heavyweight division. We’re coming to put it all on the line.

“Getting a statue in my hometown let me know that there was more work to do. I have to continue to fight and motivate and inspire. This reign is going to be a special one, because it’s going to be dedicated to the people.

“Over these years everyone has seen what I’m capable of doing and what my mindset is when I step in there. Everyone knows what I’m coming with on the 15th and what we’re going to give. Whether it’s for our family, our country or our fans, there’s one night and one fight, it’s going to be fireworks.” 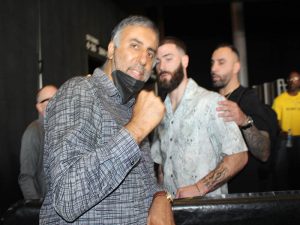 ROBERT HELENIUS: “I’m feeling really good and training camp is going great. I’ve fought a lot of good opponents and had a long career so far. This is of course a big fight for me. I have respect for Deontay, but when I come to America, I’m going to give everything that I have. “I’m ready to do everything in my power to win. I only took two weeks off after my last fight and I’ve been training since then. I know what it takes to win at this level.

“I’ve promised my fans in Finland that I would bring the world title back home and sometimes you have to go through a lot to get there. But I’m going to do everything I can. We’re doing all the extra work that we need to. “This is a huge deal. All I’ve ever wanted is to get the chance at the world heavyweight title. That’s why I’ve continued to fight. If I didn’t see myself becoming a world champion, I would have stopped and found a much easier job to do. “I’m thankful to Deontay for his nice words, but on October 15 I’m going to bring the Viking spirit into the ring.” 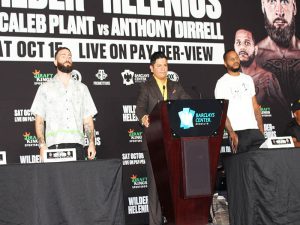 CALEB PLANT: “I’m feeling good and I’m thankful to my team. It feels good to be back and I’m excited for my first time fighting in New York. I’m looking to be impressive on October 15.

“Dirrell has a lot to say about me and says that I hate him, and that’s a strong word, but it’s true. I guess it irks him and it irks me. I don’t hold hands with guys in my division. He doesn’t even know me though. October 15 there are definitely going to be fireworks. “When I beat him, it will be because I’m better than him. But he already knows that and that’s why he hates me.

“You saw what Uzcategui did to his brother and what I did to him. I always knew he was a possibility. He couldn’t even hold onto his title long enough for us to unify and now he’s big mad. “I try to approach every fight the same and treat every fight the same. I’m all in. I’m focused and motivated. I have a great team and we’re putting together a great plan. I just can’t wait until October 15. 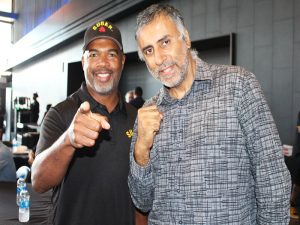 “I’m looking to put on a great performance and get my hand raised. I’m here to make a big statement. I want to clear out the rest of the division. “I’m in a blessed position to be in a title eliminator, but it doesn’t add to how focused and disciplined I am. It doesn’t matter if it was a four round fight. I’m training hard and I’ve got a lot of momentum.

“I’ve been doing my job and staying focused. I always keep boxing first in my life whether I have a fight coming up or not. I still feel like I’m hunting. There are a lot of things that I want to accomplish in this sport, but first things first and that’s handling business on October 15.”

ANTHONY DIRRELL: “I’m ready to fight and beat some ass. He’s running. He’s been running from me. Can you name somebody that likes him? Nobody likes him. Canelo Alvarez smacked you, remember that. I wouldn’t ever let another man smack me. “He fought tomato cans and cab drivers. I give him respect for Jose Uzcategui. But he was supposed to fight me before Canelo and he backed out of it. 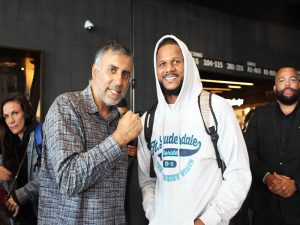 “I’ve fought the best, who’s he fought? He’s fought nobody. He knows it. Forget my experience, I’m beating him down. “This is just another fight. I’m preparing like it’s any other fight. When it comes down to it on October 15, he’ll see. “I’m just looking to be me and put on a great performance. Everyone knows I’m the dog and that’s what I’m going to show once again. “I always do what needs to be done outside of the ring. I’ve kept my body where it needs to be. If you take care of your body, your body will take care of you.” 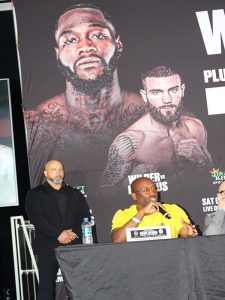