Humanitarians of the World Inc , did their most largest Humanitarian Needy and Homeless Tour of East Coast -2018. We started off From Florida Orlando , from there we went to Daytona Beach Florida, where we presented close to 20 families who were homeless and living on the beach and Daytona Beach  area, a lot of them coming throughout the USA. 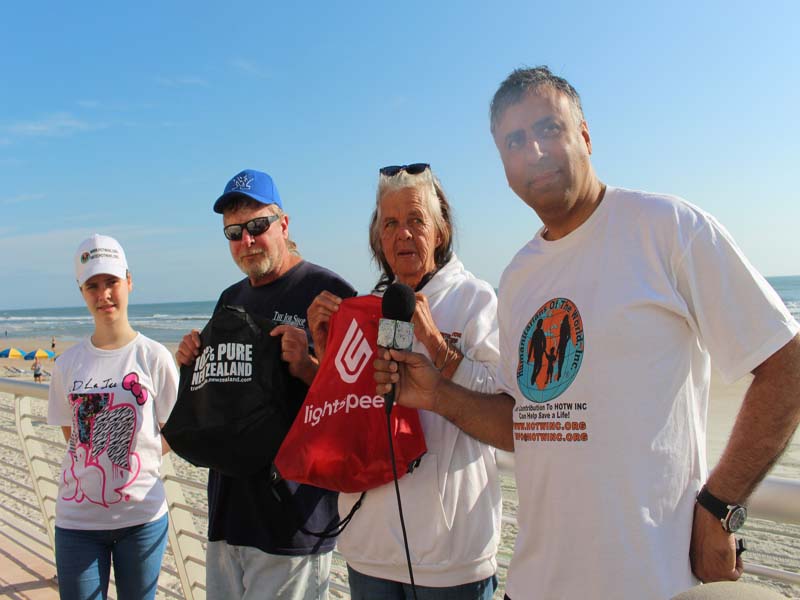 The next step of the tour was St Augustine Florida , where we presented 5 Single individuals with our Tote bags filled with basic necessities, 2 of the homeless people were from St Augustine, the other 3 were from out of state looking for jobs but ended up being homeless and started living on the streets. 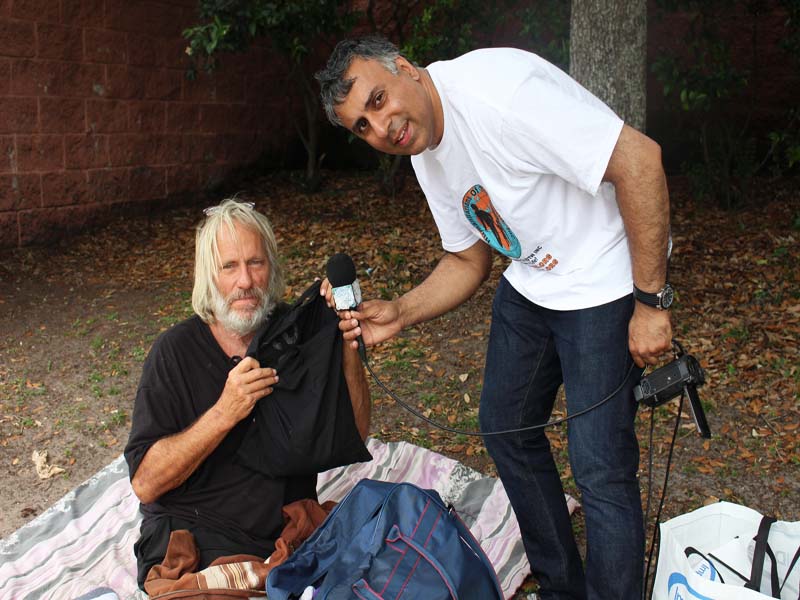 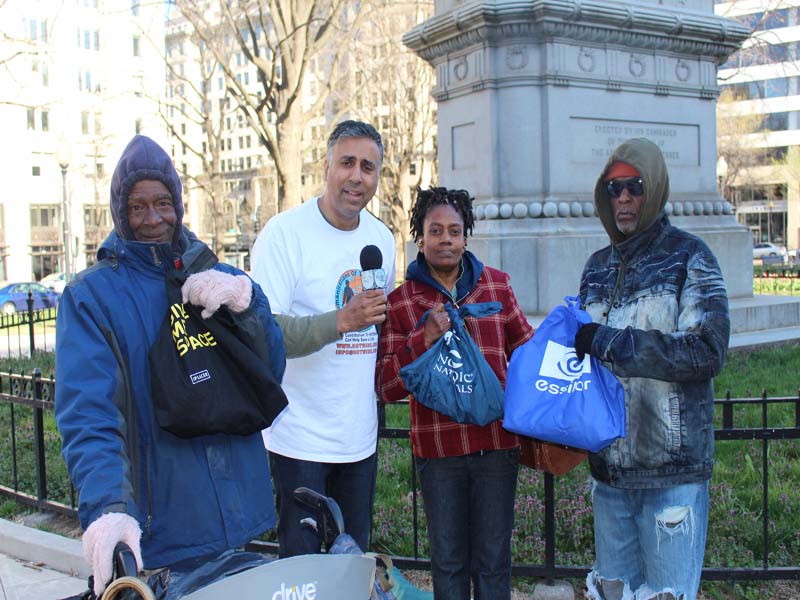 Doing a presentation to Homeless in Washington DC

In Jacksonville Florida, a lot of people who were homeless, were from Jacksonville, with about 10% of them out of state. We Spoke with many of them asking them how they became homeless, a lot of them said, there rent got so expensive and were evicted by their landlords and had no choice but to end up being homeless and living on the streets. 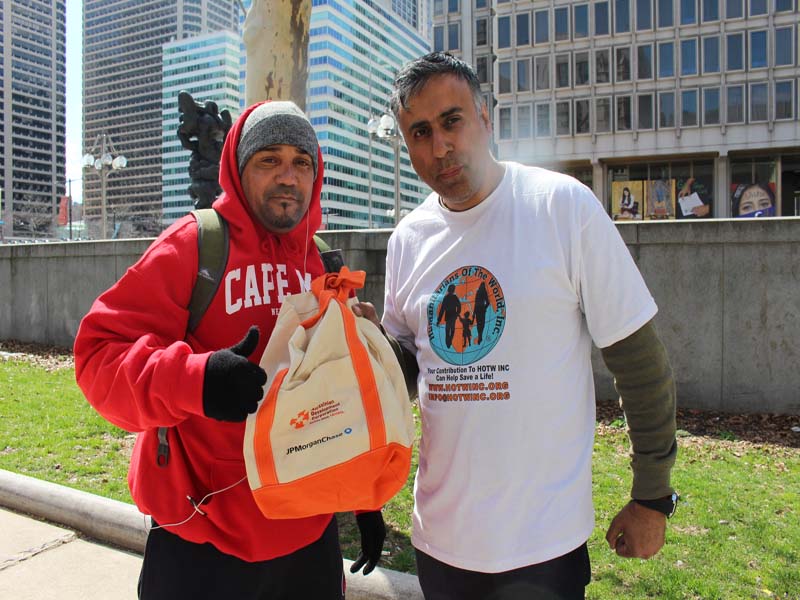 Giving a bag to Carlos from PA

Some had mental issues, others had no jobs to support their self’s ,one women told us after being homeless she became an prostitute, to help her make an income for herself.

After Jacksonville Florida, we stopped in Maryland and Washington DC, in Maryland we saw many people on the streets walking bare feet, a good amount of them having mental issues, some had Drug and Alcoholic Problems, as we came to Washington DC, We saw mostly people who were from Washington DC, and were homeless living on the streets. One person told us he was working a full time security job and was still not making enough money to rent one room for his self, he told us he was also eating at homeless shelters and soup kitchens, others   turned to panhandling, begging for money and food , to survive. 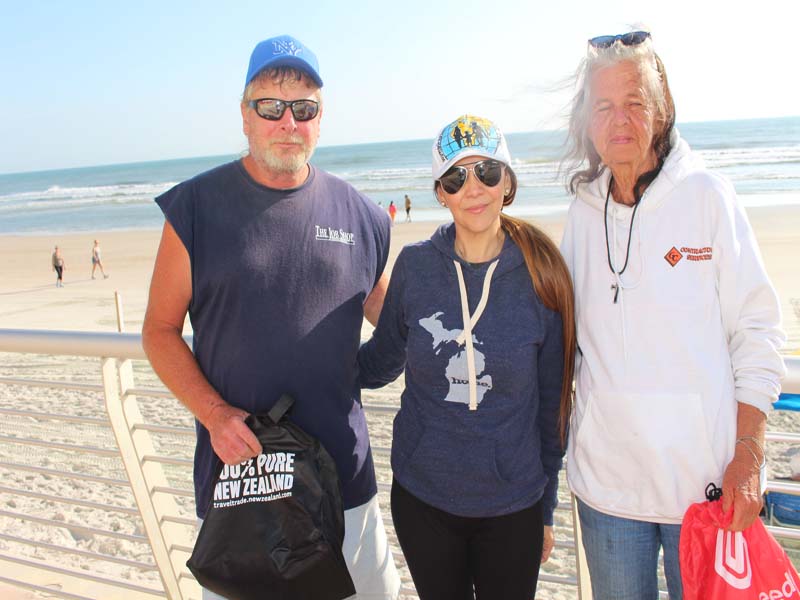 After Maryland and Washington DC  , we made a stop at Delaware, we presented to 10 Homeless individuals, few of the homeless people told us in the daytime they panhandled  and pointed out to us in the night time they will sleep in abandoned buildings, with no light or heat, once asked how do they stay warm in the cold ,they replied they would burn an small fire, outside to keep their selves warm. 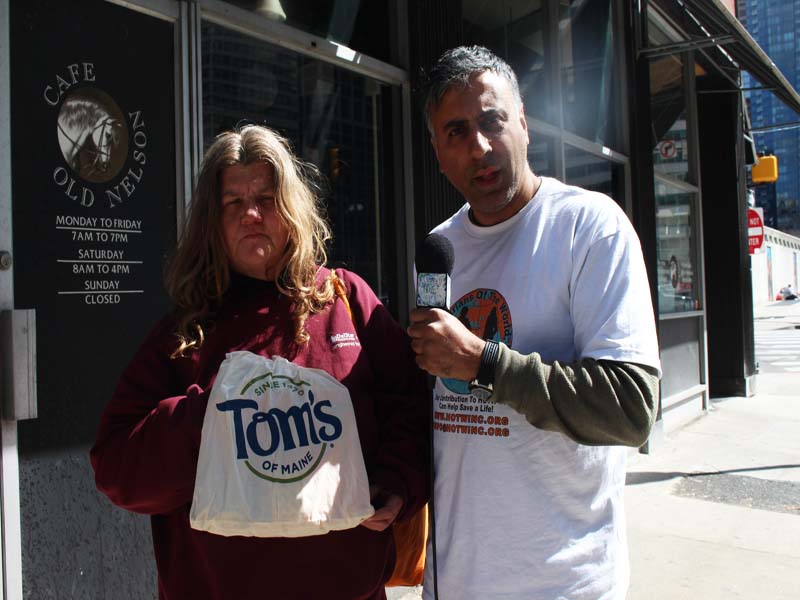 Giving an bag to Jane in Philadelphia

One person told us he came from Florida to Delaware to find an job, when he got there he found out that there was no job, he had no money to return back to Florida, he was hustling to raise money by panhandling  so he can buy a one way bus ticket to go back to Florida. 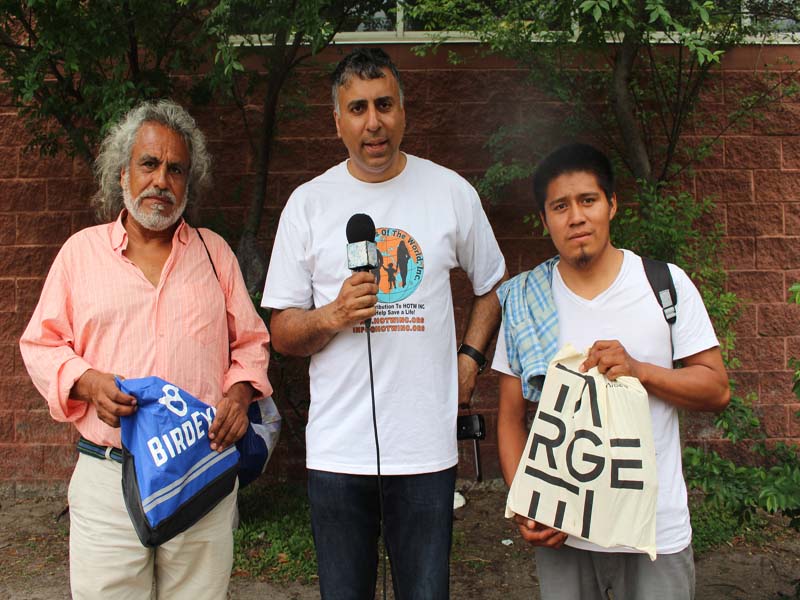 Maryland homeless Jose and Carlos being given bags 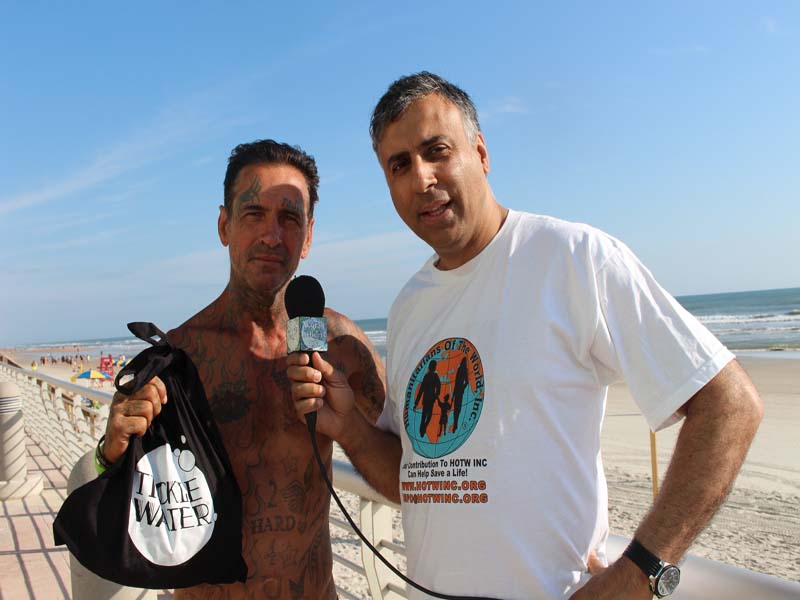 One Teenage boy told us his stepfather raped him, while his mother was at work and he ran away from home, and ended up living on the street ,and he went on to say up to this date he has nightmares about his situation, when we asked him, if he told the police, he said if he did his stepfather told him that he will find him and kill him after he gets out of Jail, so he got scared and ended up moving away from his family members, he said he is safer on the streets then living with his family members. 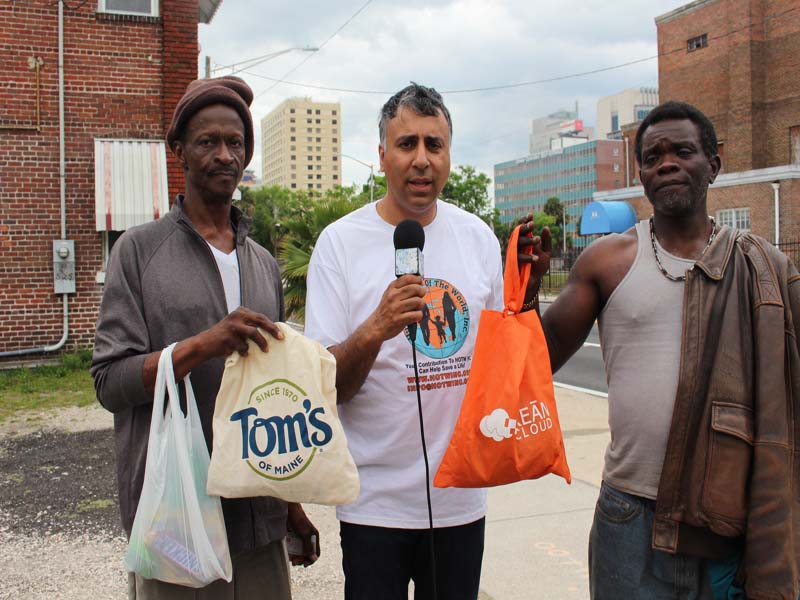 Presentation of bags to 2 Homeless men in Jacksonville Florida

I have to thank this individual, when I asked him about the Rocky Statue, he told me exactly how to get there, which I did go and took a pic with Rocky ( Sylvester Stallone).

From Pennsylvania and Philadelphia, we went to our last destination Newark New Jersey, here we were directed to an homeless shelter, on our Way to the shelter, we could not help seeing on each corner many drug dealers getting in and out of the cars, and selling drugs. 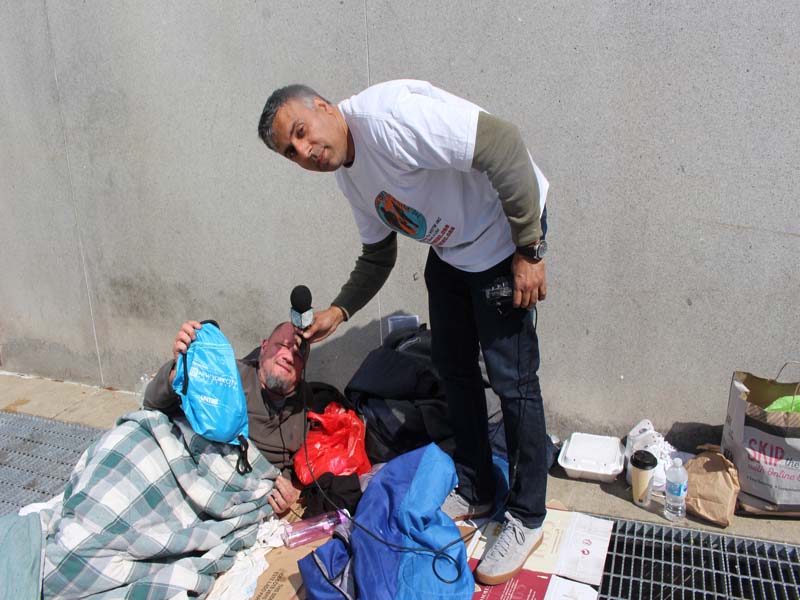 Presenting a bag to Big Bob Homeless from Maryland

It was so sad that this was happening, and we met an older veteran who served in war, lost his both legs and was in a wheel chair , he was pushed by a friend he made in an shelter, who also is homeless, the veteran went on to say, he lost his benefits, his wife died and had 1 son ,who had a job and was making a good living, but did not want to help him ,told him to get support from VA, and Government Agencies.

Well I have to say ,I have been doing this all over the World, from age 8 Now Fifty Years old for approximately 42 years , the old veteran is the 1 millionth person we have touched through donations, referrals and Counseling .We are very honored that we have accomplished this milestone as an Humanitarian. 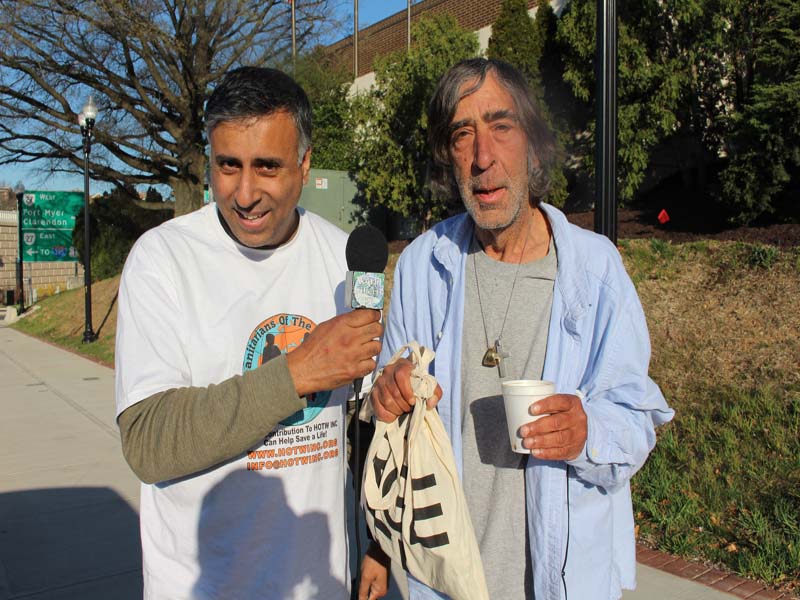 Presenting a bag to Boo Boo Homeless From Virginia

I like to thank a few people who travelled on our Humanitarians of the World Inc ,Needy and  Homeless East Coast Tour -2018, Liliana Rocio, our Volunteer and committee member,  who was video taping and photographing the whole tour.,Prof Anatoly Veltman , who drove us from NY to every destination on our East coast tour, he is one of the most knowledgeable person on travel , as he has been travelling for the past 30 years, thank you Prof Veltman, we honor you. 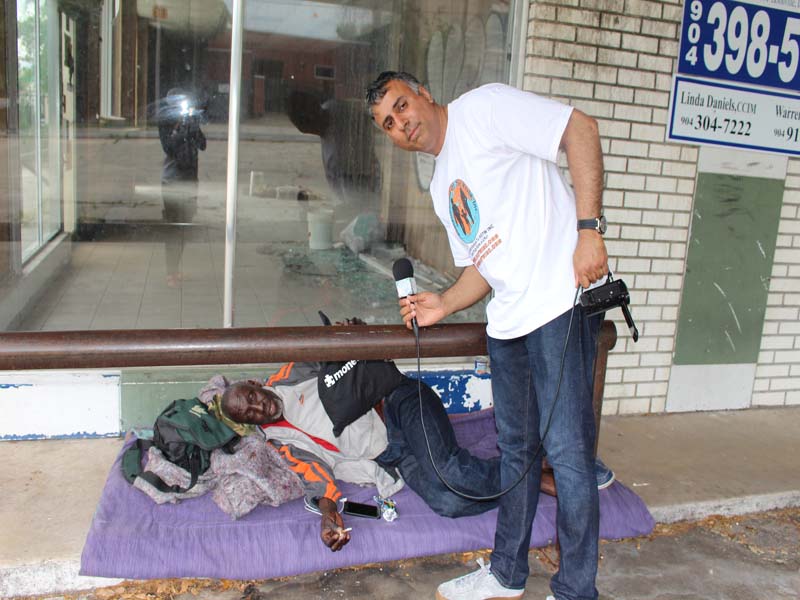 Presenting bag to an Homeless and AID Sufferer in Jacksonville Florida

Athena , Jr  and Francis our volunteers, and last but not of least Leslie Rae, who was worked with us in NY For 10 years as an volunteer, taking pics and many other capacities, Leslie was very instrumental in Helping us  set up meetings with Veterans from Orlando ,and also Leslie is the VP of Florida for  Humanitarians of the World Inc. 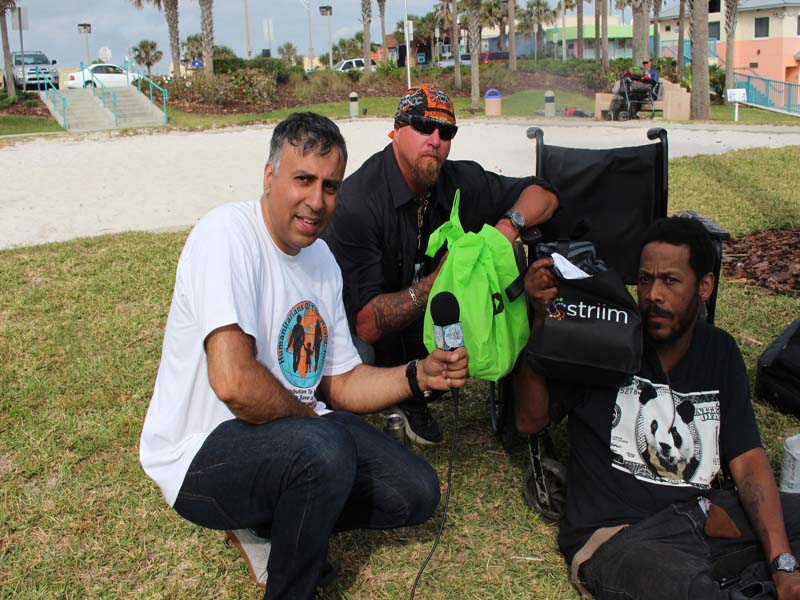 Presenting bags to Disabled and homeless in Daytona Beach Florida

About Us: Humanitarians of the World, Inc. (HOTWINC), is also a not for profit 503(c) tax exempt organization.

One of the goals of HOTWINC is to broadcast Humanitarian activities taking place throughout the world via its official online TV, “World Liberty TV Humanitarian Channel” located at www.worldlibertytv.org. 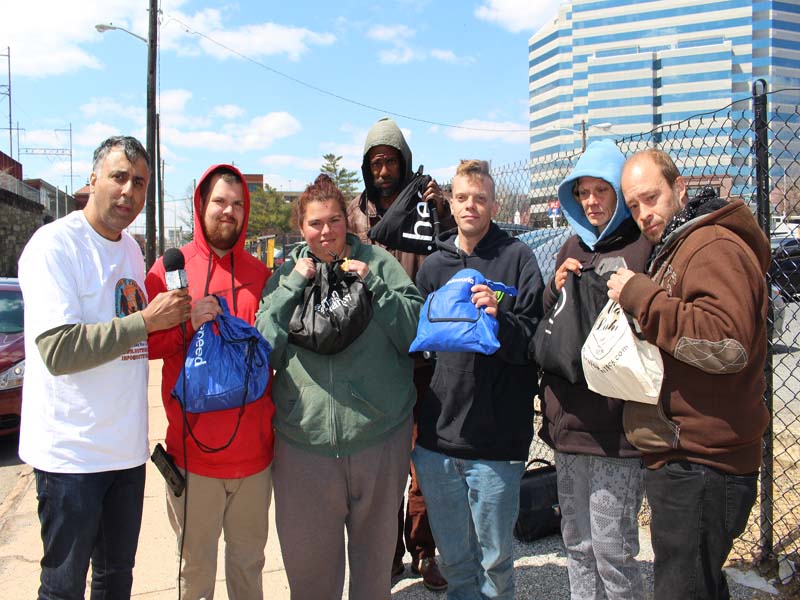 Presenting bags to Homeless in Delaware

Another goal of the organization is to recognize those individuals and entities that provide humanitarian services through charitable acts or activities throughout the world. Medals of recognition will be awarded to those whose humanitarian efforts assist, support, and further the economic, social, mental and physical well-being of the underprivileged, disenfranchised, suffering and/or downtrodden people of the world, as a way of honoring them at the annual fundraising galas, and eventually HOTWINC Hall of Fame annual events. 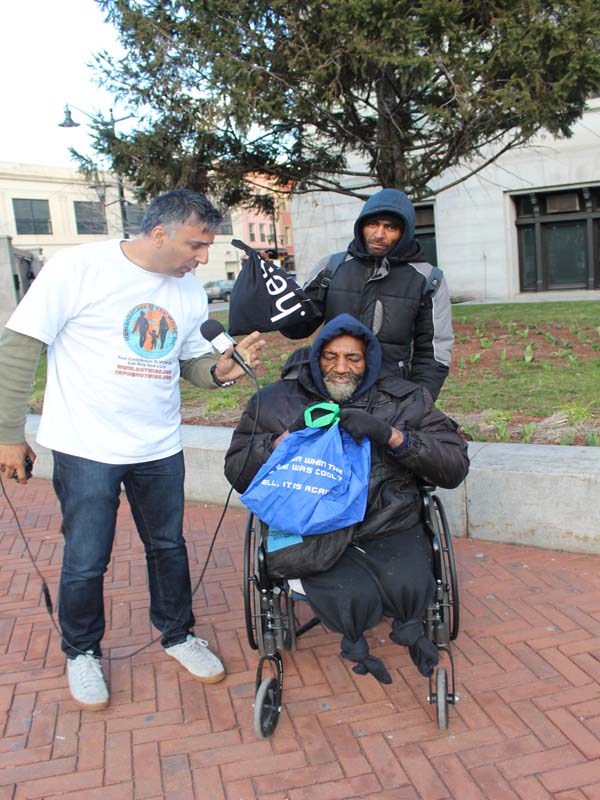 Humanitarians Of The World Inc. does not receive federal, state or city funding but raises money through charitable contributions made by corporate or private concerns. The members of HOTWINC are caring community minded people that give their time and funds, to help those less fortunate and in dire need of assistance. The very essence of the organization’s foundation is the humanitarian causes it serves. Seventy five percent of the money HOTWINC receives through fundraising and other charitable activities will fund the organization’s humanitarian causes. 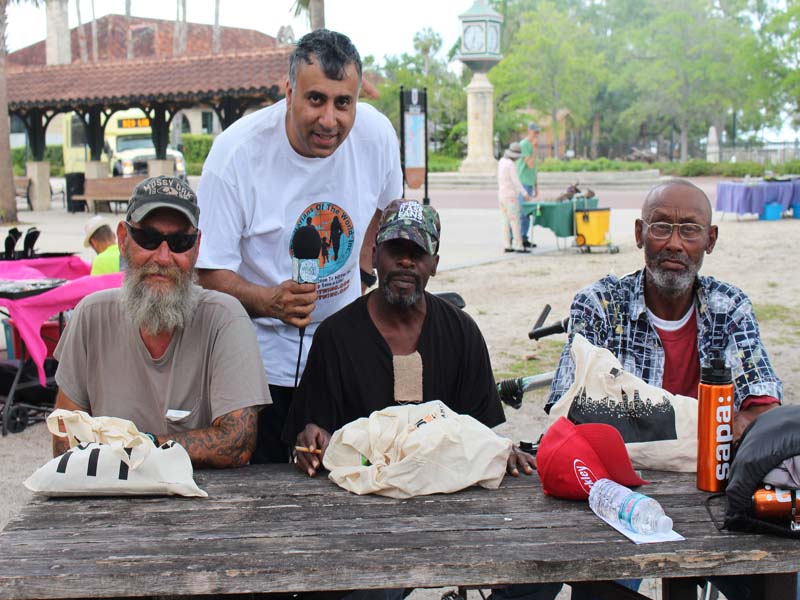 Presenting gifts and bags to the Homeless of St Augustine Florida

Let me finish by saying this, it was a very expensive trip, we did not get any funding or any kind of donations, we financed this fully by ourselves, if anybody is interested in Donating monetary Funds, as we have a lot of Clothes and food on hand , feel free to contact us at our Humanitarians of the World Inc by Clicking here. 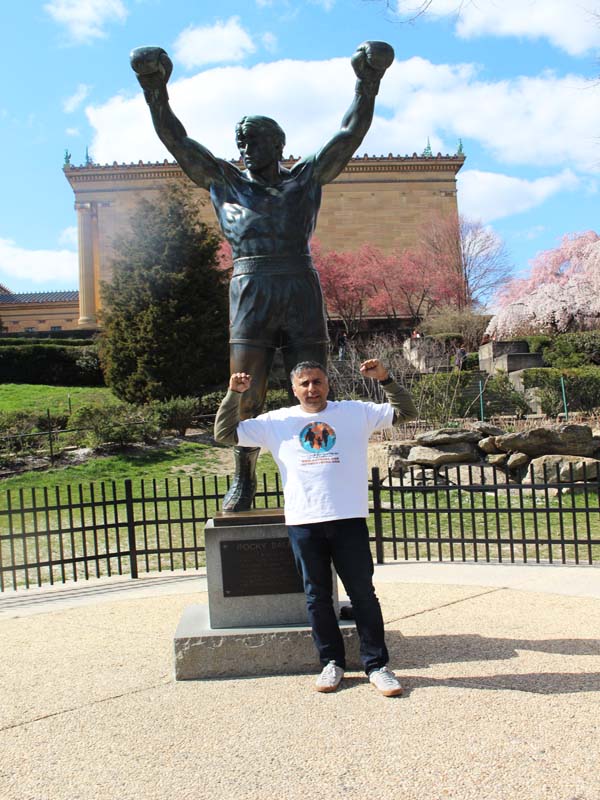 In front of Rocky Statue in Philly

Also remember our motto: Your Contribution to HOTWINC, Can Help Save a Life!.