On Sat January 6th 2018, our Humanitarians of The World Inc, (HOTWINC), Volunteers traveled to the West Coast, Las Vegas, Nevada.., to do a homeless and needy family presentation, or in other words people living on the streets. 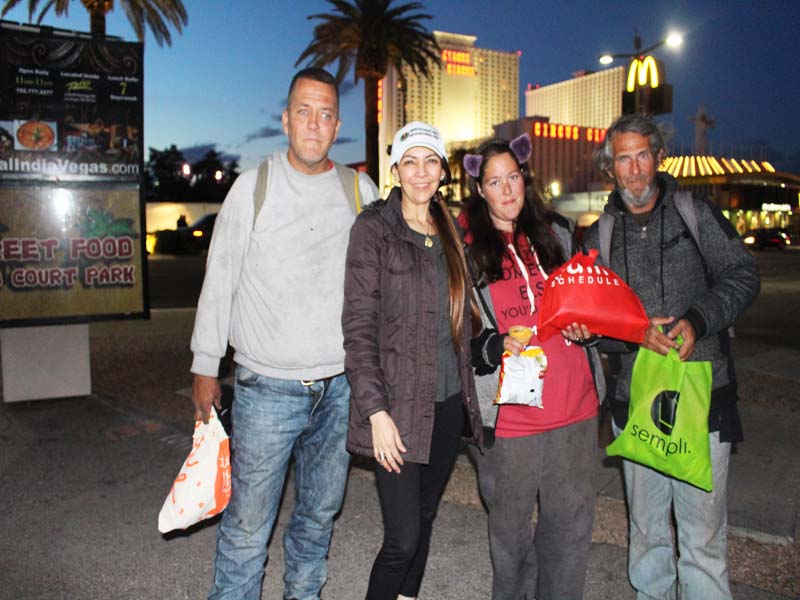 A bag full of clothing, food, basic necessities, and basic technology items like battery & headphones was given to 20 individuals .

Some of the Homeless individuals shared there story with us, off the camera and did not wanted there real names mentioned, for personal reasons.So we will just address them with there first initial. 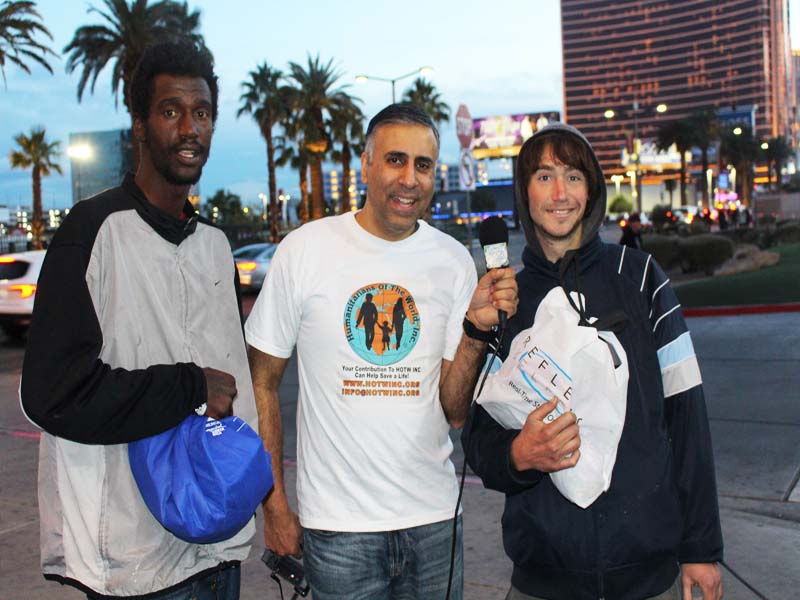 Dr.Abbey with MR M & Mr W Living in the Streets

Mr M: Grew up in an dysfunctional family ,with 2 Brothers and 1 sister, in Las Vegas, minutes away from Las Vegas Strip. Father was an Alcoholic and was always drinking and getting Drunk, mother had an job to support the family, with her income.He would beat the mother on many occasions, in front om Mr M and his Brother and sisters looking on.

It got to an level where the mother filed a police report, and moved out of the house with Mr M. and his Brother and Sister, to an local shelter , and as Mr M. told us at age 18 , he left the shelter, and started living on the streets since then, Approx 3 years ago.

Begging for money and food on the Las Vegas strip, when asked if he try to look for the mother and other family members he said, he rather live on the street and continue this life style. 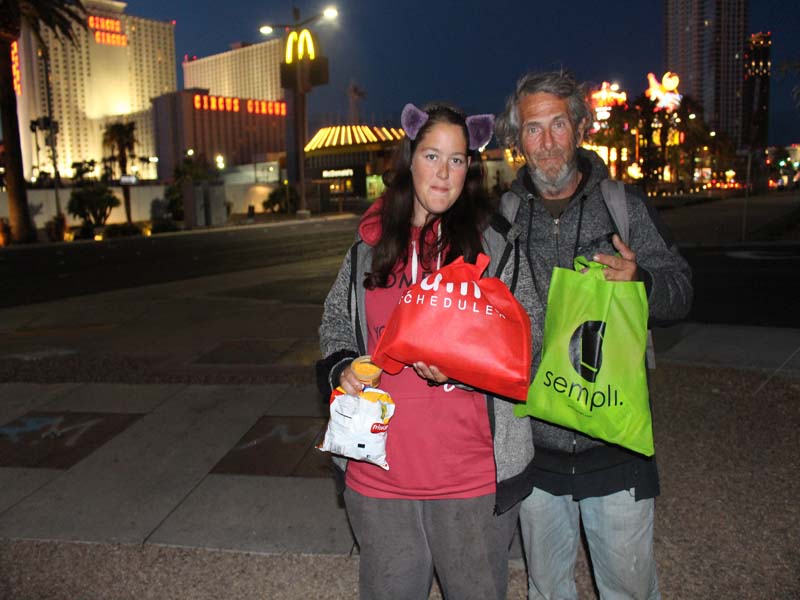 MR W: Came from nearby Denver, Colorado, MR W told us that he was the only child, his mother and father were both  Drug users, all their lives, and the even shared drugs with him, and got him hooked onto drugs.

He also told us that he often sold drugs in Colorado,  outside nightclubs and schools ,until he got busted by the police, and after that he packed his things and headed to Las Vegas.

He said, he has been in Las Vegas for 3 Weeks and is looking for any kind of Job, but has been has no look in finding a job, sleeping in the street benches and begging for money and food.He went onto say, he sees his self-going back to selling drugs, since he has no other way to survive. 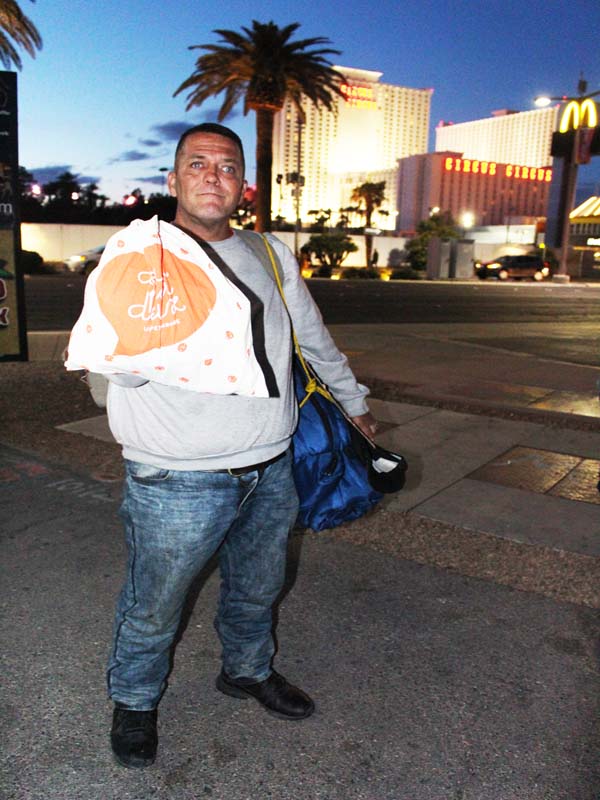 MR K & his wife: Man and wife lived most of their life, in California, MR K  had a good paying Job, and eventually got laid off , and when he tried to look for another job ,it was hard to get an Job , and eventually lost his 1 room he was renting, and became homeless in California, where was begging on the Street to get food and money.

Lived most of the time in parks, Sleeping on Benches and in Beaches, he went on to say he met his future wife , who too was homeless ,and they decided to move to Las Vegas on the Strip , he said, that he did not find any kind of Job, so they are begging on the Street for Money and food, he said he was supposed to get an apartment from a city Program, but they asked for a lot of paperwork, which he was not able to provide, so he never went back.

When asked what he is doing to change his life, he said he will play Slots in the Casino and maybe his luck with change, and he said this in a very passionate way. 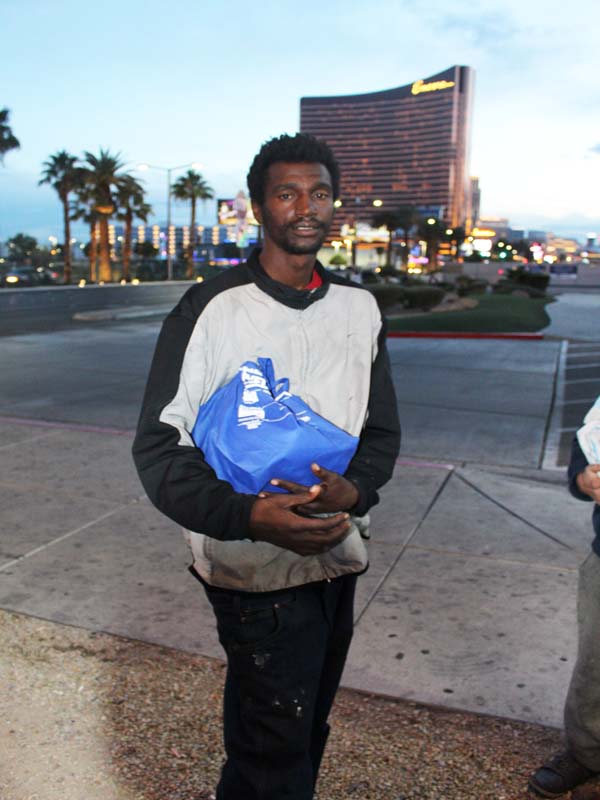 MR V: Was in the Army most of his life, and was born in Las Vegas, not too far from the Strip, he said once he got discharged, he had a little money to rent 1 room, which he did .He had an job as an security officer in one of the Casino’s , which he held for 1 year.

When asked why he got fired, he told us that he had mental issues, and was going to VA , Hospital for Counseling, he was at war and with his self , and he lost his job and 1 Room he rented , he has been hustling on the street for the past 2 years. The VA Hospital is trying to get him accommodation, but MR V, said he leaves his future in God’s Hands. 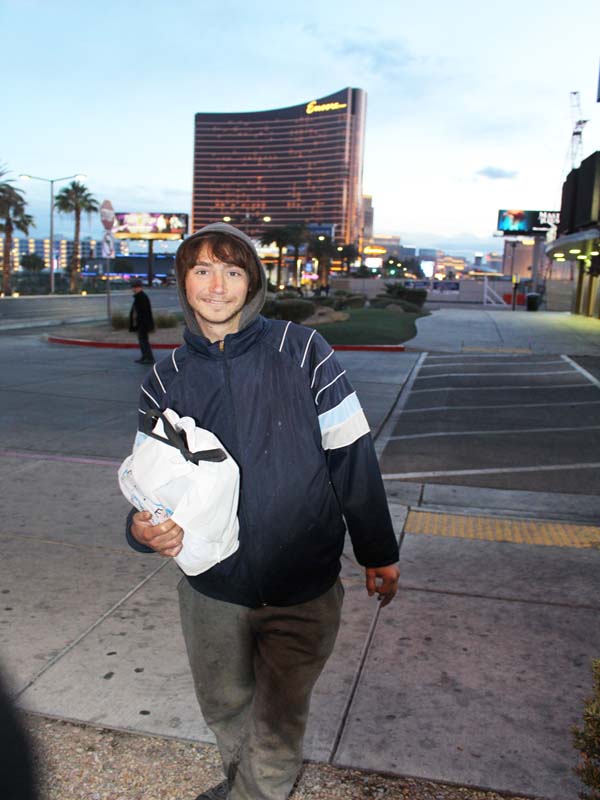 MR W Living on The Streets

I have to say, this group of Homeless people have some real stories , that has put them in this position, each one of them shared this with me. All of them were very happy to receive a Bag from us , and thanked the Humanitarians of The World Inc, (HOTWINC).

See exclusive footage of the Las Vegas (West Coast) Homeless Presentation by HOTW INC  -2018 ,in our Humanitarians of The World Inc, (HOTWINC)  by clicking here.