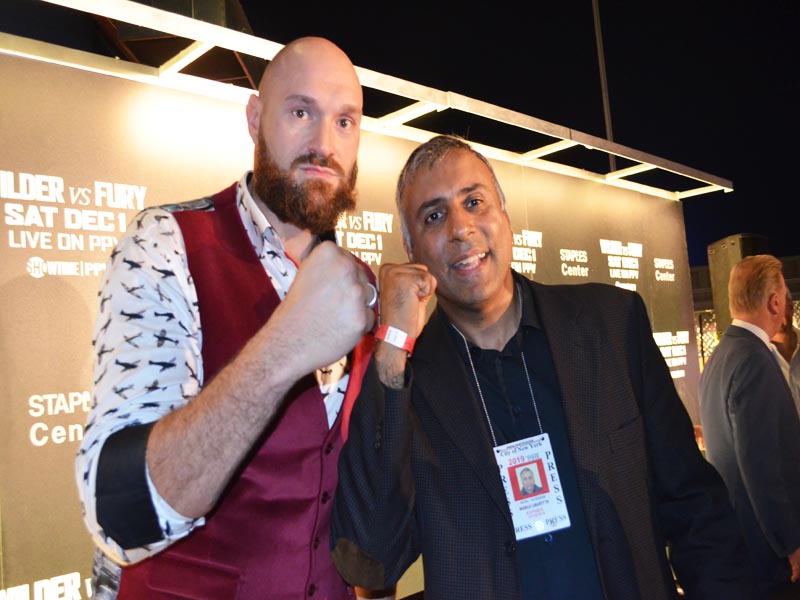 The evenly matched showdown of top-ranked heavyweights pits boxing’s two largest champions against each other in the most significant heavyweight fight in the United States since Lennox Lewis vs. Mike Tyson in 2002. In addition to physical stature – Wilder is 6-foot-7, Fury 6-foot-9 – both are among boxing’s greatest showmen, with outsized personalities and heavyweight charisma. 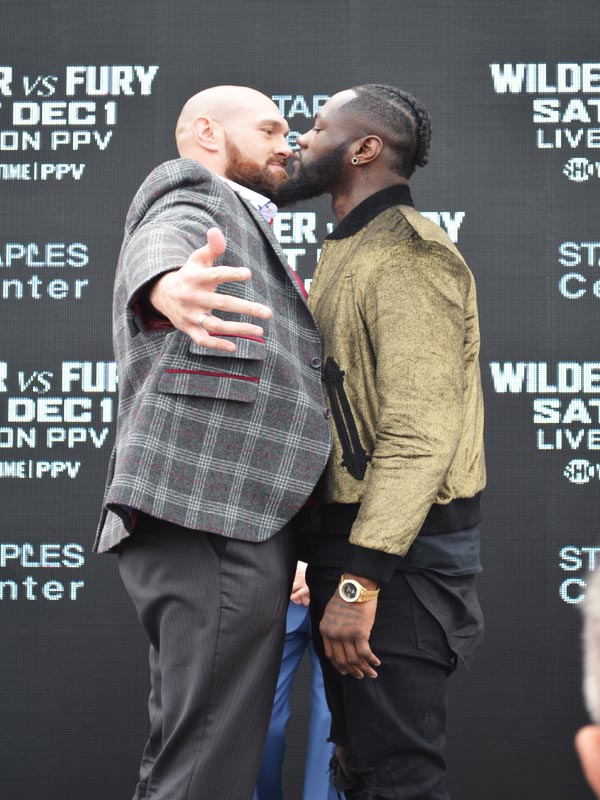 Wilder and Fury Doing a face off

“Wilder vs. Fury is a throwback to the glory days of heavyweight boxing – a 50/50 matchup between two larger-than-life athletes with towering physical frames and captivating personalities,” said, Stephen Espinoza President, Sports and Event Programming for Showtime Networks Inc. “Deontay Wilder has proven he’s the hardest puncher in boxing. Tyson Fury‘s size and skill set present a challenge unlike any other in the heavyweight division. No one knows what will happen when these two giants step into the ring, and that’s what makes this fight so fascinating.” 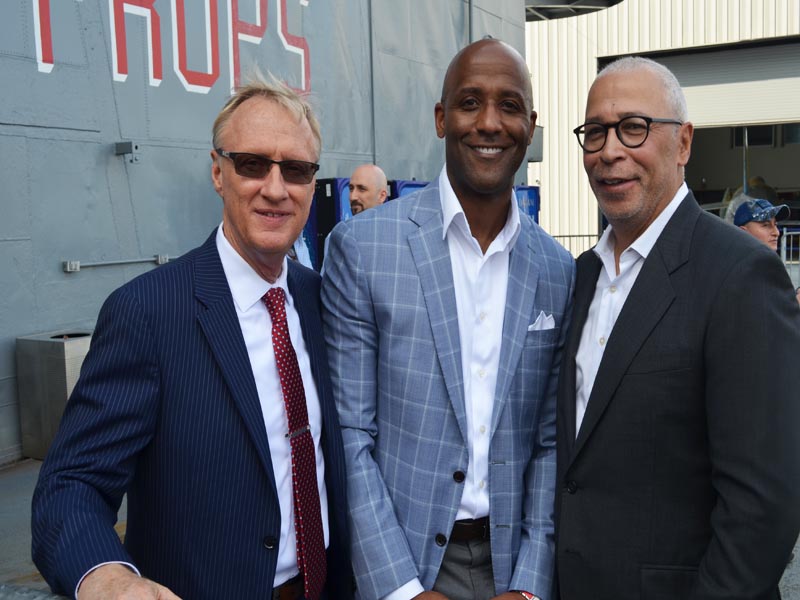 Wilder vs. Fury is the latest major heavyweight event to take place in the Southland, expanding an already deep history of heavyweight boxing featuring Hall of Famers Joe Louis, Muhammad Ali, Lennox Lewis and Vitali Klitschko, the last of whom faced off at STAPLES Center in 2003. 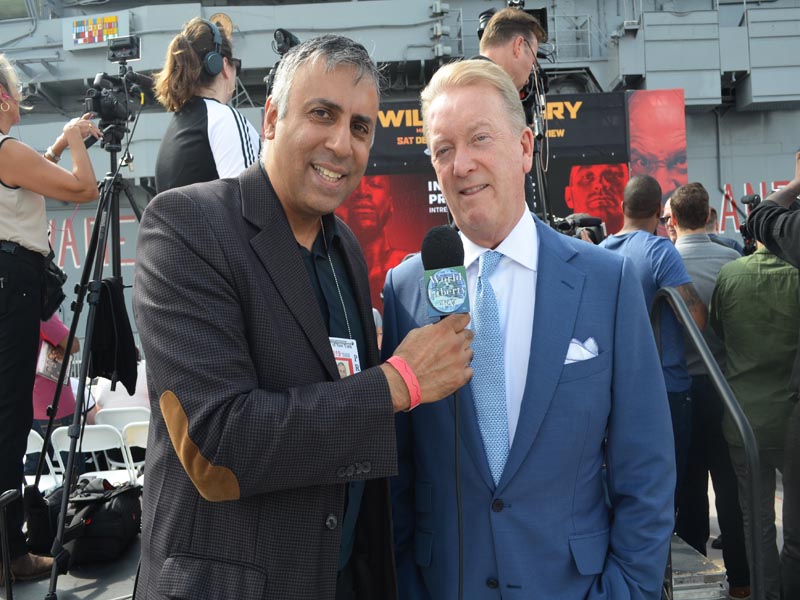 Tickets for the event, which is promoted by BombZquad Enterprises and Queensberry Promotions, in association with DiBella Entertainment and TGB Promotions, Wilder vs. Fury will be produced and distributed by SHOWTIME PPV. 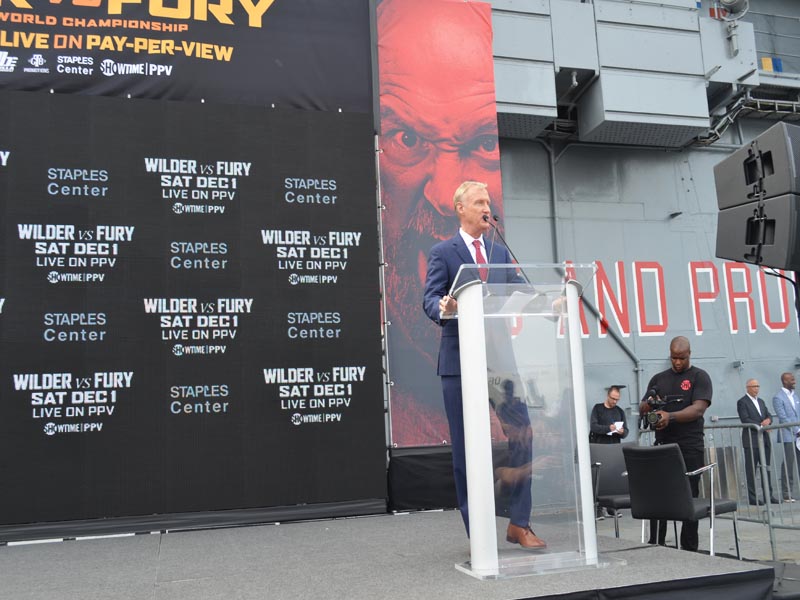 “I can’t wait to fight Tyson Fury in the biggest fight in the heavyweight division and all of boxing,” said Wilder. “I have tremendous respect for Fury for agreeing to leave England and come to the U.S. to challenge me. I’m the WBC champion, he’s the lineal champion, and the winner of this fight will show the world who is ‘The Man’ in the heavyweight division. As much as I respect Fury, I fear no man and fully intend to knock him out like every man that I’ve ever faced in the ring.” 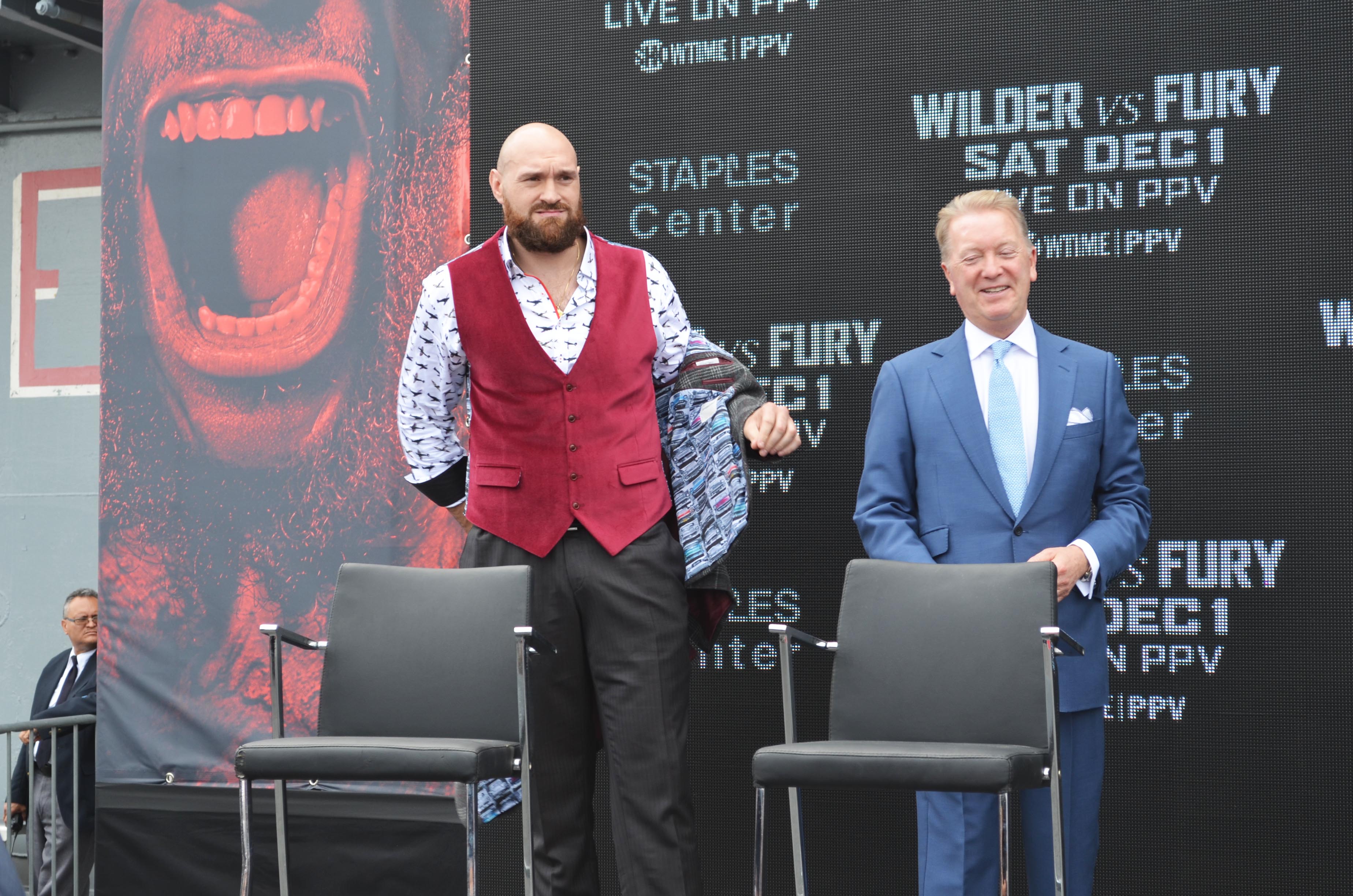 “People talk about me only having two fights since my layoff, but that doesn’t bother me at all,” Fury said. “This is the Tyson Fury show. It always has been. This is my era, and I proved that when I beat Klitschko in his own backyard. Is Wilder the biggest puncher I have faced? You don’t know that until you are on the floor. It is all about not getting hit in this fight. Until someone beats me, I am the king of the heavyweight division. Long live the king.” 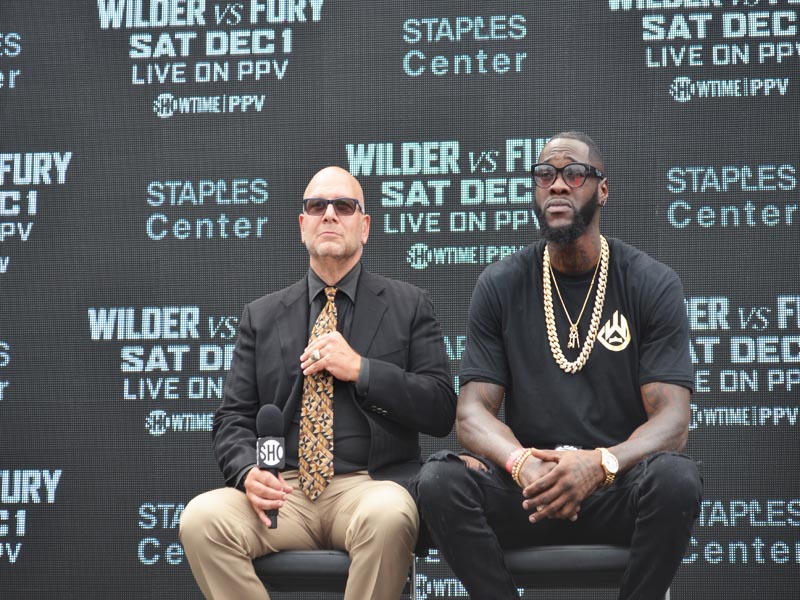 “There is no better place in the world than STAPLES Center to have these two giant heavyweights, WBC champion Deontay Wilder and lineal champion Tyson Fury, clashing in an epic championship fight,” said Lee Zeidman, President, STAPLES Center. “This is the kind of match that will add to the rich tradition of Southland boxing and we are incredibly proud to host it.’’

After winning bronze at the 2008 Olympic Games, Wilder knocked out his first 32 professional opponents inside of four rounds to earn a shot at WBC Heavyweight Champion Bermane Stiverne on Jan. 17, 2015. The Tuscaloosa, Ala., native defeated Stiverne via near-shutout decision, going the distance for the first time in his career to become America’s first heavyweight world champion since Shannon Briggs in 2007.

As WBC champion, Wilder has knocked out all seven of his world title challengers, including a devastating first-round knockout of Stiverne in a 2017 rematch. In his last fight, Wilder survived the toughest test of his career in undefeated top-five ranked world title challenger Luis Ortiz. Wilder knocked out the Cuban slugger in a leading candidate for 2018 Fight of the Year.In Fury, Wilder will face his second consecutive top-five heavyweight in what experts have set as the closest odds of his professional career.

Fury, who was born in 1988 and named after then-heavyweight champion Mike Tyson, competed as an amateur for both England and Ireland before turning professional in 2008. The self-proclaimed “Gypsy King” dominated the competition early in his career to earn a world title shot against Wladimir Klitschko, who had ruled over the heavyweight division for nine consecutive years. 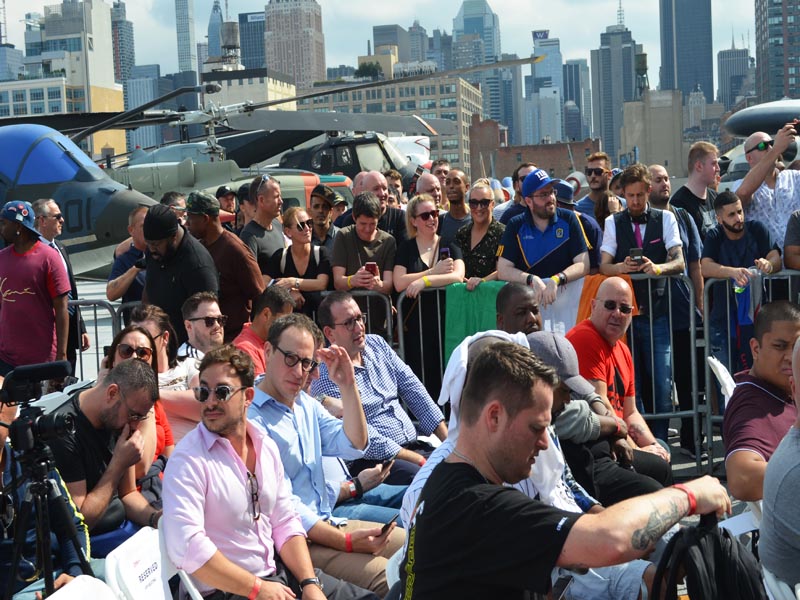 Fury shocked the world with a unanimous decision win over Klitschko in 2015, limiting the future Hall of Famer to the worst offensive output of his professional career. Subsequent battles with drugs, mental health and weight gain, along with a failure to face his mandatory challengers, cost Fury his belts and led to a nearly three-year hiatus from the sport. 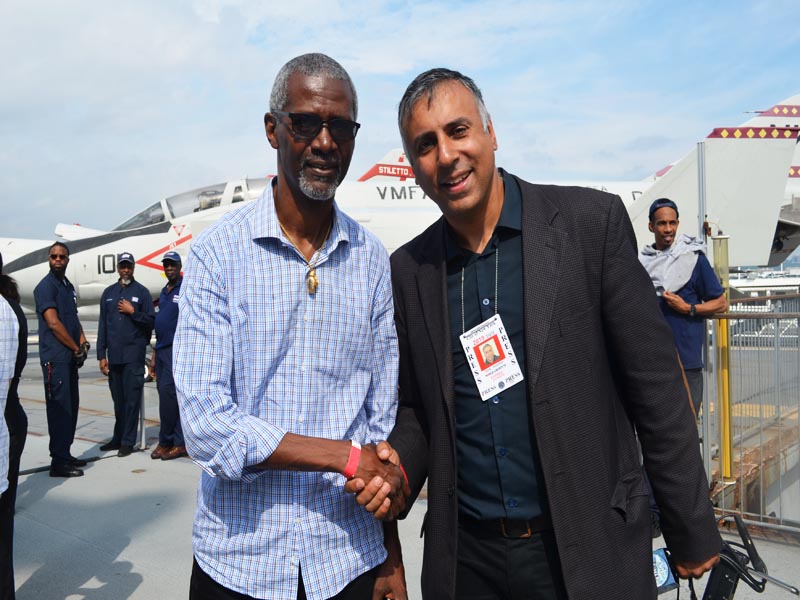 Fury was triumphant in his long-awaited return on June 9 against Sefer Seferi, leading to a second comeback fight less than 75 days later against former world title challenger Francesco Pianeta. Weighing within 11 pounds of his fighting weight when he dethroned Klitschko, Fury displayed prime movement, hand speed and footwork in a shutout decision to earn the opportunity to become a two-time heavyweight world champion on December 1.

See more about DEONTAY WILDER VS. TYSON FURY, in our World Liberty TV Boxing Channel and blogs by Clicking here.