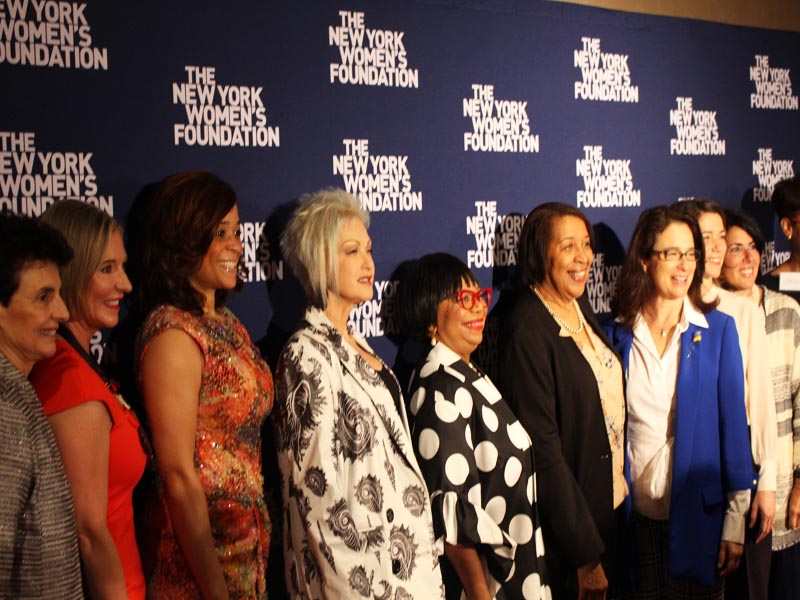 Cyndi Lauper with NYWFdn’s Co-Chairs Officers & Board of Directors

More than 2,200 supporters from community, philanthropy and business joined The New York Women’s Foundation (The Foundation) on May 14 to honor six extraordinary leaders whose vision, energy and achievements have had a transformative effect on communities in New York City and beyond. The Breakfast also honored The Foundation’s grantee partners—dynamic community organizations working to advance economic, gender and racial justice.

The 2019 Celebrating Women® Breakfast recognized Abigail E. Disney, philanthropist, filmmaker, activist and Chair Emerita of The New York Women’s Foundation Board, with the Century Award for her courageous efforts in fighting economic inequality and storytelling that fosters human understanding, peace and justice. 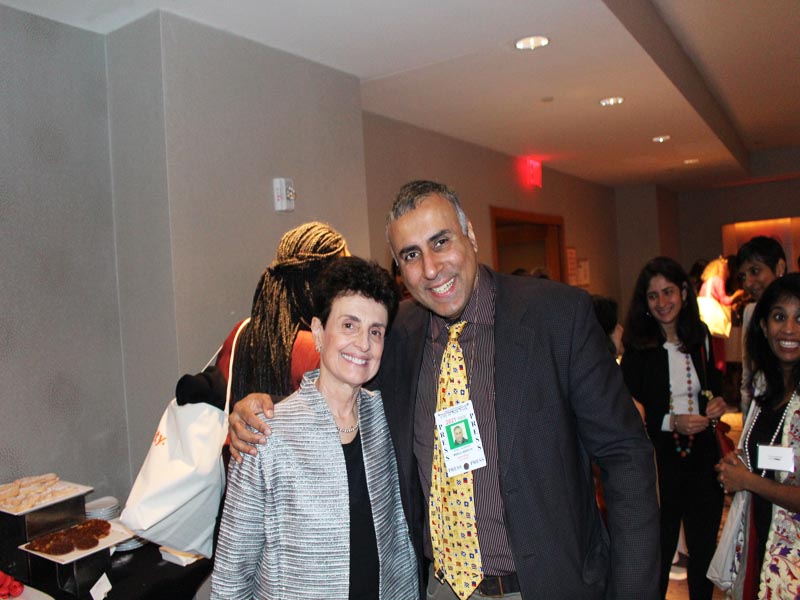 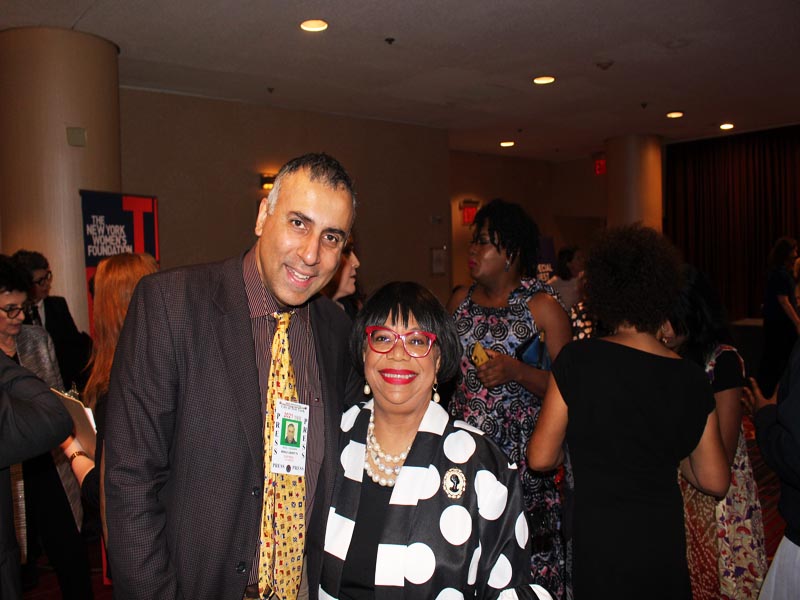 Grammy, Emmy and Tony Award-winning artist Cyndi Lauper, Co-Founder of True Colors United, and Rhonda Joy McLean, attorney, author, philanthropist and former Board Co-Chair of The New York Women’s Foundation, were recognized for their charitable endeavors and advocacy with   Vision Awards for Philanthropy.

The awards were presented by Tarana Burke, Founder and leader of the Me Too Movement; Ms. Disney; Catherine Gund, filmmaker and activist; Foundation Board Members Anne Delaney and Ayo Roach; and Marjorie Cadogan, former Board Member. 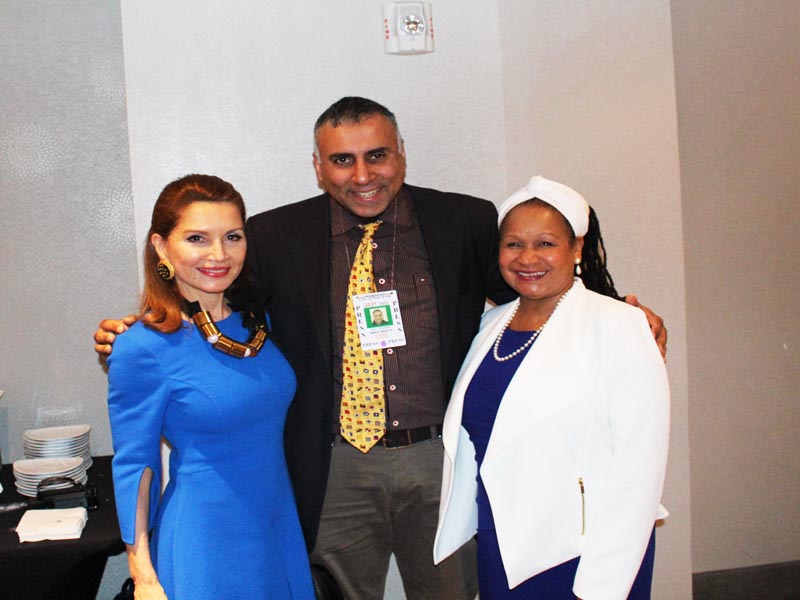 Ana Oliveira, President and CEO of The Foundation, said, “The Celebrating Women® Breakfast is a testament to the power of radical generosity. Our honorees, grantee partners and supporters understand how collective action is key to building the world we want to see right now. The Breakfast celebrates women’s leadership as activists, movement-builders, problem solvers, advocates and philanthropists, and it builds energy to keep moving forward together to advance a more just future for women, girls and LGBTQI individuals.” 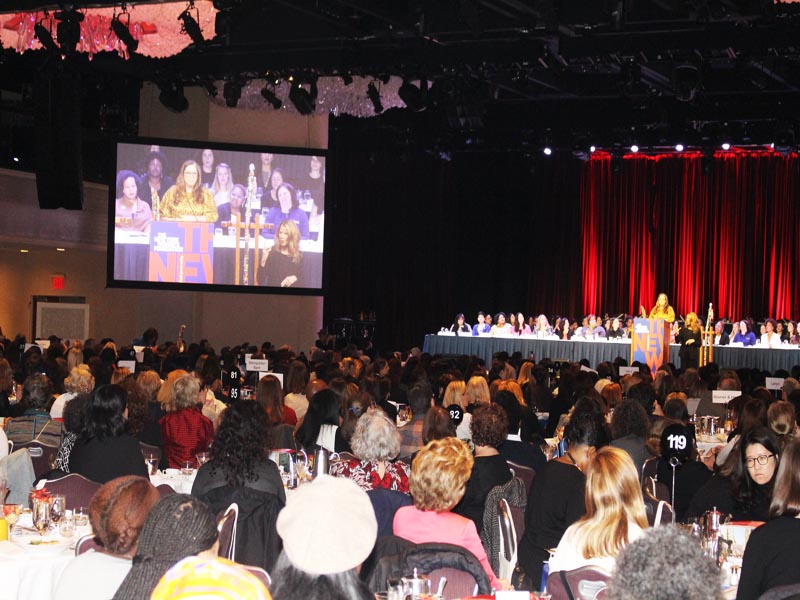 The celebration opened with a performance by students from Developing Artists, whose mission provides opportunities for underserved teens to proclaim themselves as artists and activists and to reach their full potential through the performing arts. 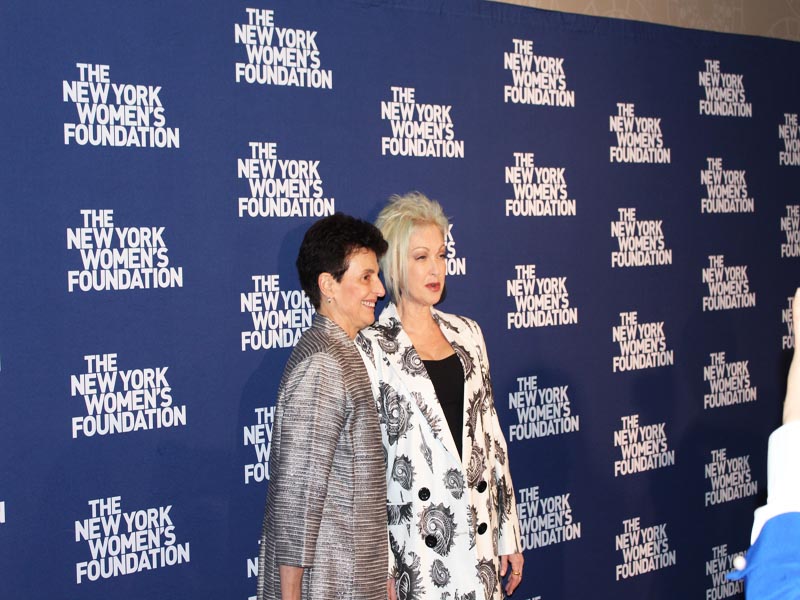 The annual Celebrating Women® Breakfast raises funds for The New York Women’s Foundation. The Foundation’s grantmaking places it at the top of public women’s funds in the United States and in the top two in the world. 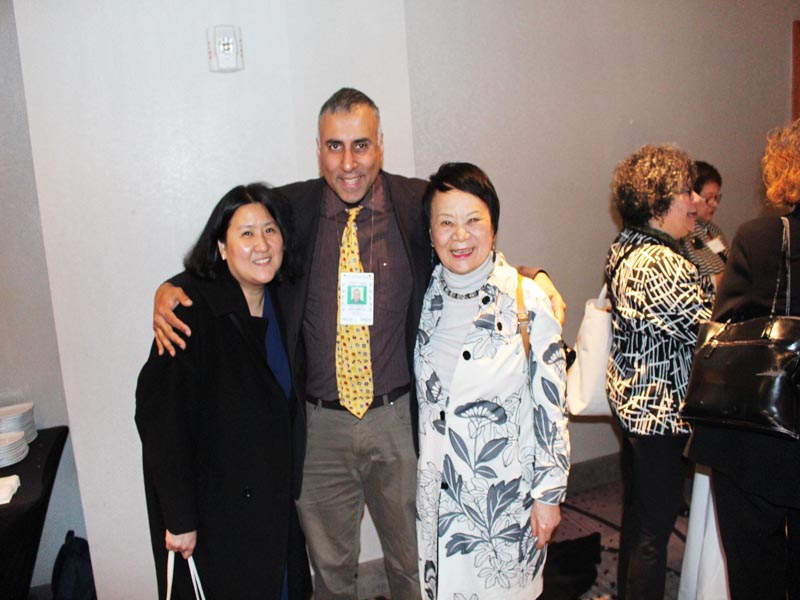 Ms. Disney said, “I love The New York Women’s Foundation.  It is where I have learned my way around grantmaking. It is where I have formed some of my deepest friendships.  And it has shaped my understanding of the best way forward. I am humbled and thrilled to receive the Century Award.” 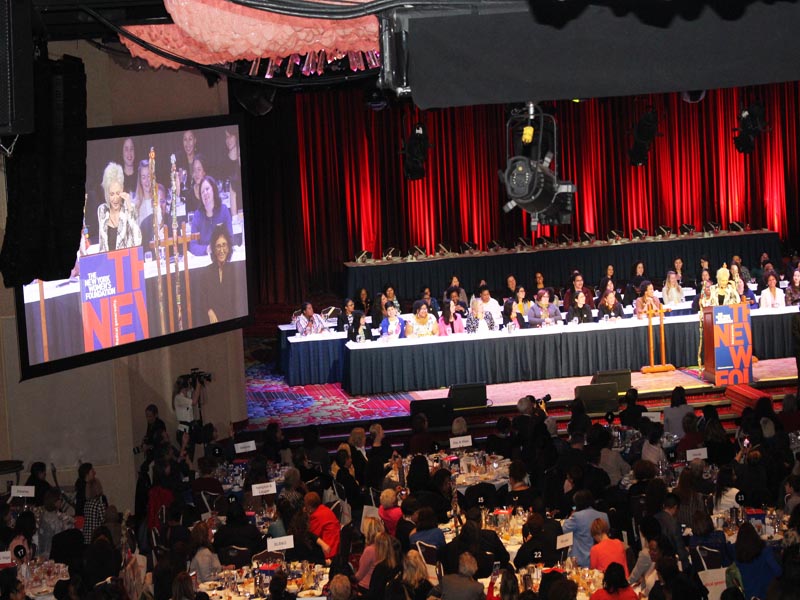 Ms. hampton said, “There’s never been a more important time to for women to center other women, to be led by the most vulnerable among us, and to invest in that leadership with resources.”

Ms. Lauper said, “I feel really lucky that I’ve been able to use my music as a platform to address social issues, acceptance, equality, and women’s empowerment. Thank you to The New York Women’s Foundation for honoring me with the Vision Award.” 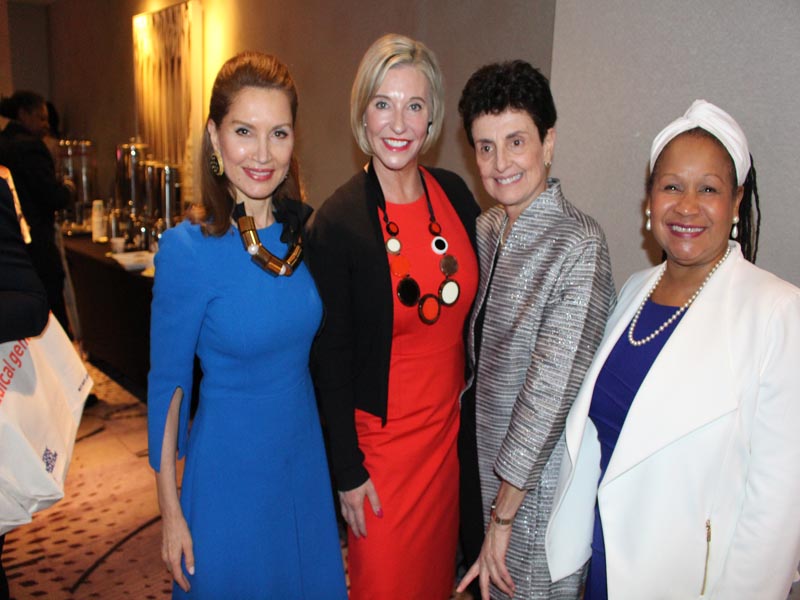 Ms. McLean said, “As a volunteer with The New York Women’s Foundation, I learned how to activate my personal power, not only for myself, but also on behalf of others.  This activation elevated my commitment to purposeful living and has greatly enhanced my life.”

Dr.Abbey with Lorraine A. Cortés-Vázquez Board of National Puerto Rican Day Parade

Ms. Srisakul said, “The support of The New York Women’s Foundation of someone like me— a woman of color in leadership in a workplace dominated by white men – is so meaningful, not only to myself but to the other women behind me who are helping to change our landscape.”

Dr. Moreno Vega said, “As women and girls, we are integral to all the dimensions that form civil society. Therefore, it is essential that we work as one to confront injustice in all forms and areas. The New York Women’s Foundation’s breakfast celebration and honoring of women and girls reminds us always that the work to achieve justice insists that we join together across cultural, racial, economic and gender definitions to dismantle injustice.  What an honor to be part of the work and be recognized as an active participant in justice work.” 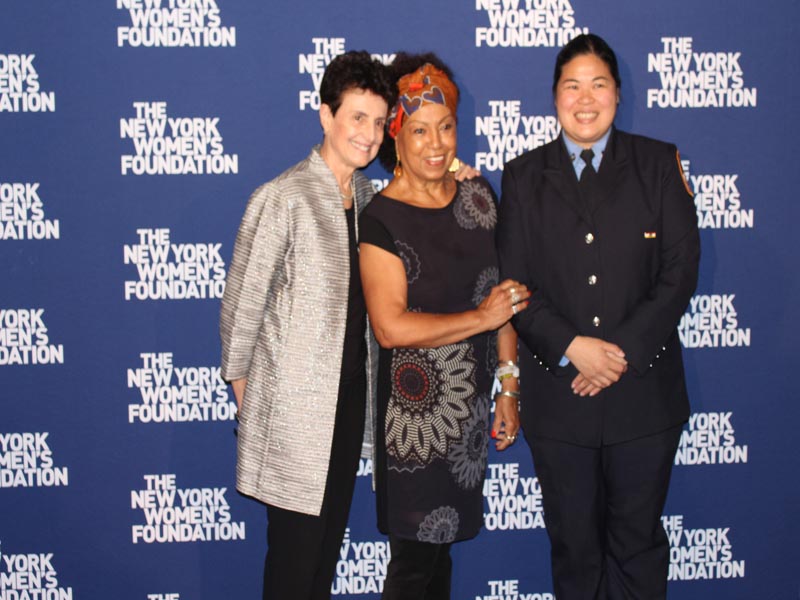 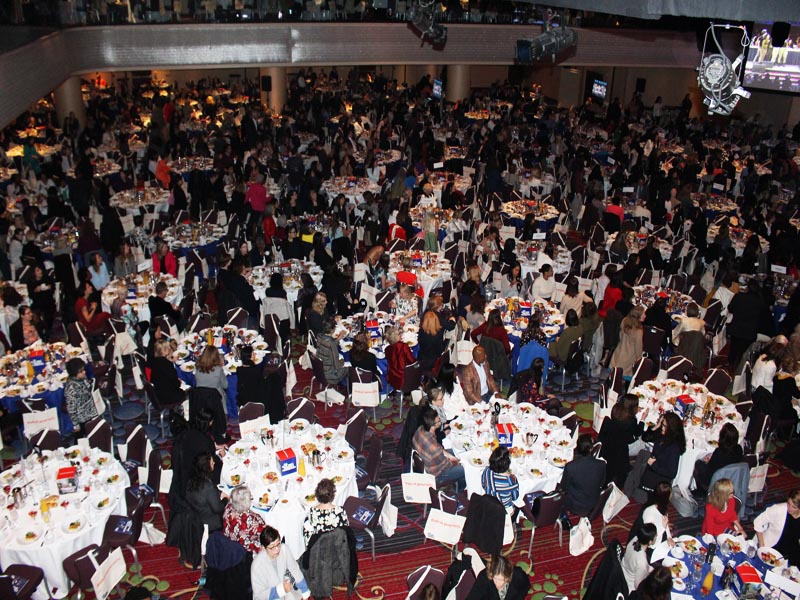 Over 2200 women in attendance 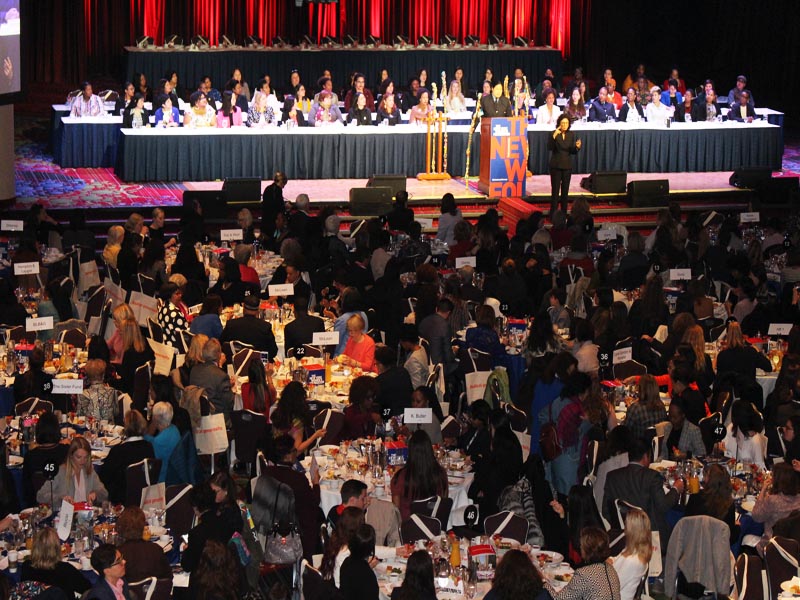 About The New York Women’s Foundation: Since 1987, The New York Women’s Foundation has advanced a dynamic philanthropic strategy based on the fundamental reality that, when women thrive, their families and communities also thrive. The Foundation’s grant making places it at the top of public women’s foundations in the United States, and in the top two in the world. We invest in women-led, community-based solutions that promote the economic security, safety, and health of women and families in New York City. 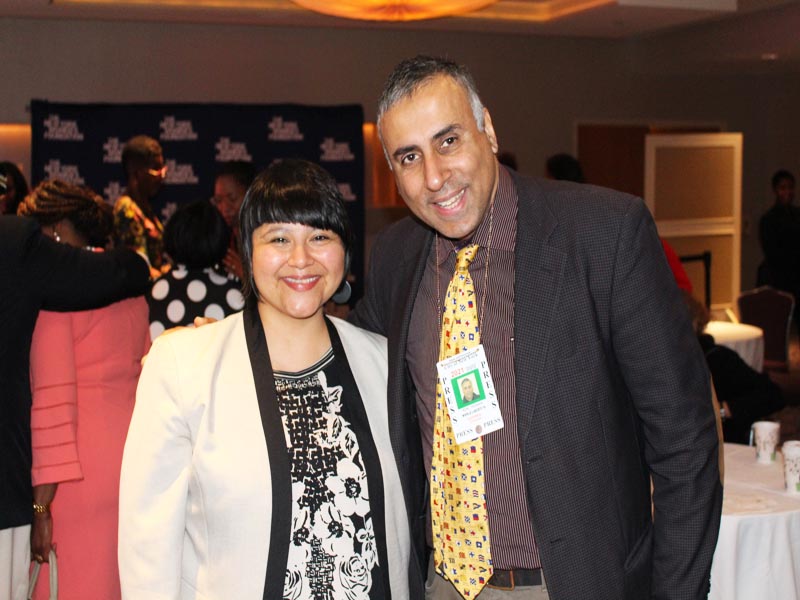 We foster women’s leadership, create partnerships that spark catalytic change, exchange insights with experts across sectors, and empower women by training them in activism and philanthropy to accelerate and sustain forward progress. To transform  lives, families, and communities – and create a better New York City for all. 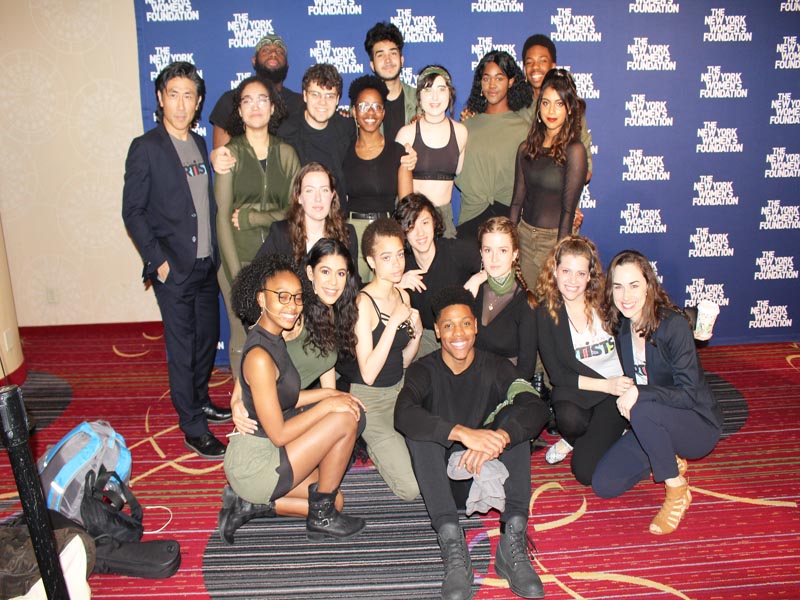