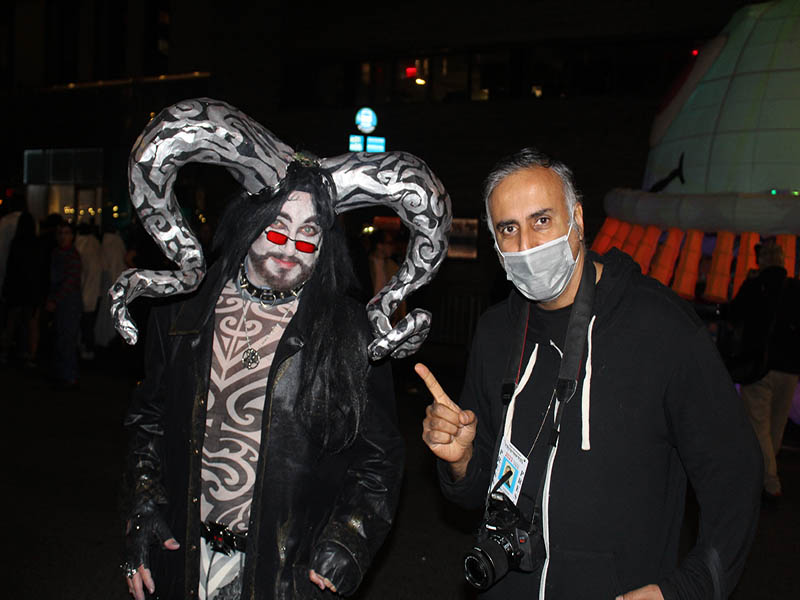 “When I heard on the news that the annual Village Halloween Parade was going to be canceled for lack of funds, I was devastated,” Feldman said. “I immediately felt called to save the parade, and to make a difference for our city. Honestly, as a native New Yorker I love this parade so much I don’t really think I had a choice. 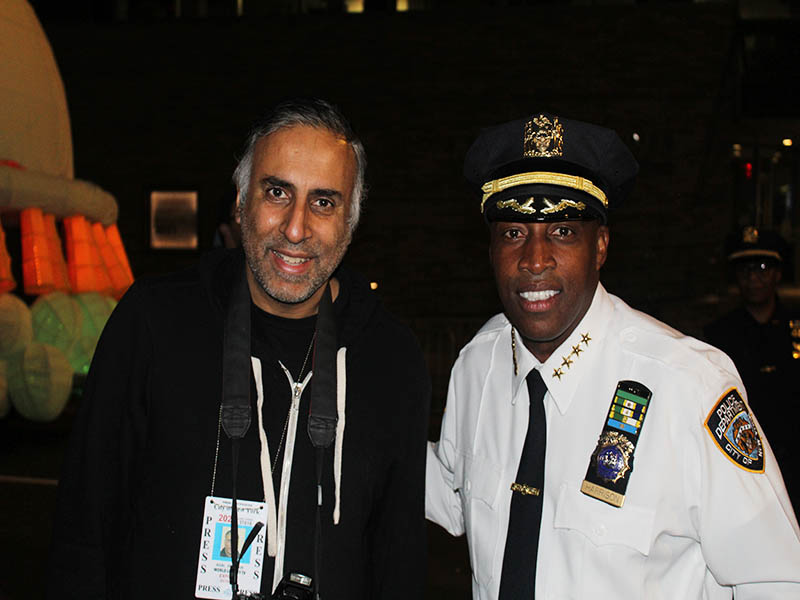 I know it’s not literally the shot in the arm most people are looking for, but I would suggest it’s the best medicine for our city.” Thank you Mr Feldman for your contribution to keep the parade going, totally a great man who deeply cares about New York and of course the Halloween Parade. 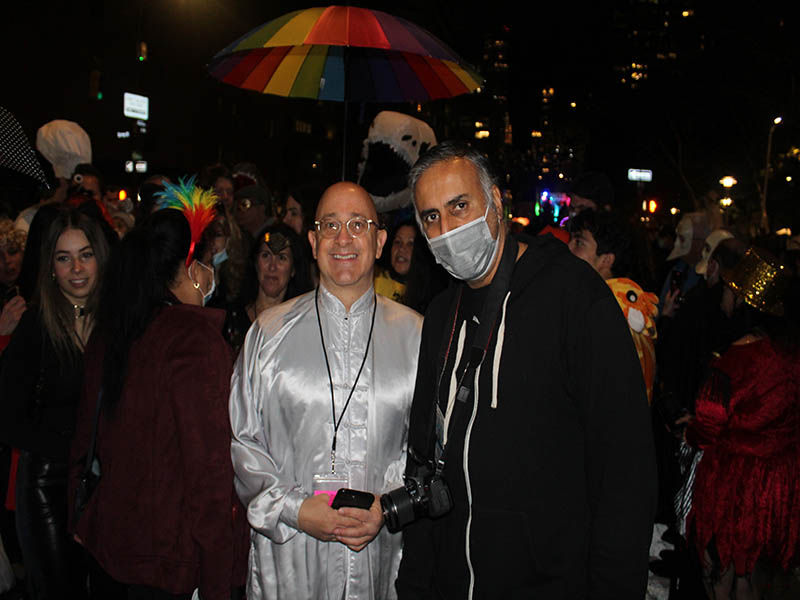 Jason Feldman Savior of the Parade

This year’s Parade is dedicated to the Children of NYC who could not celebrate Halloween last year. This year we are inviting them to design the giant Puppets that lead the Parade! New York City’s Halloween Parade was resurrected on Sunday night. 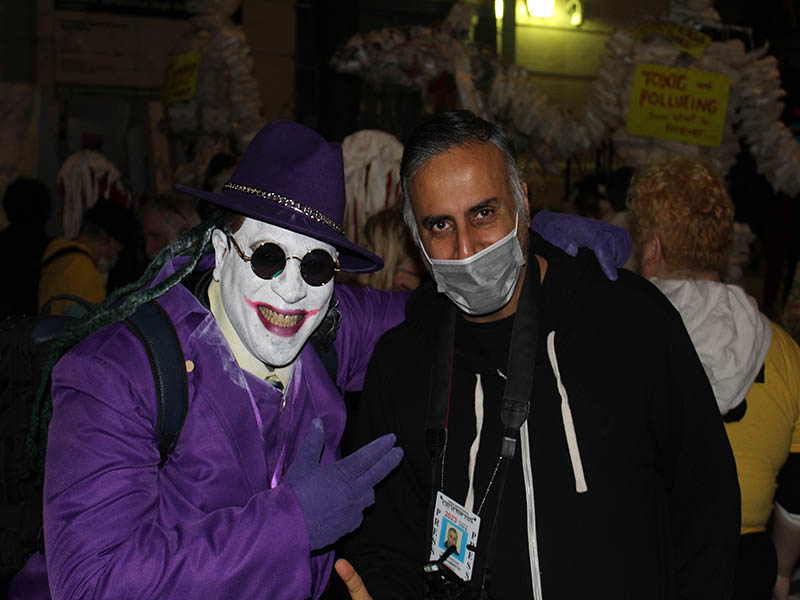 Dr Abbey with the Joker

Tens of thousands of revelers returned to Manhattan to take part in the Greenwich Village Halloween Parade that was nixed last year because of the COVID-19 pandemic — and many attendees donned coronavirus-themed costumes as they marched up Sixth Avenue. 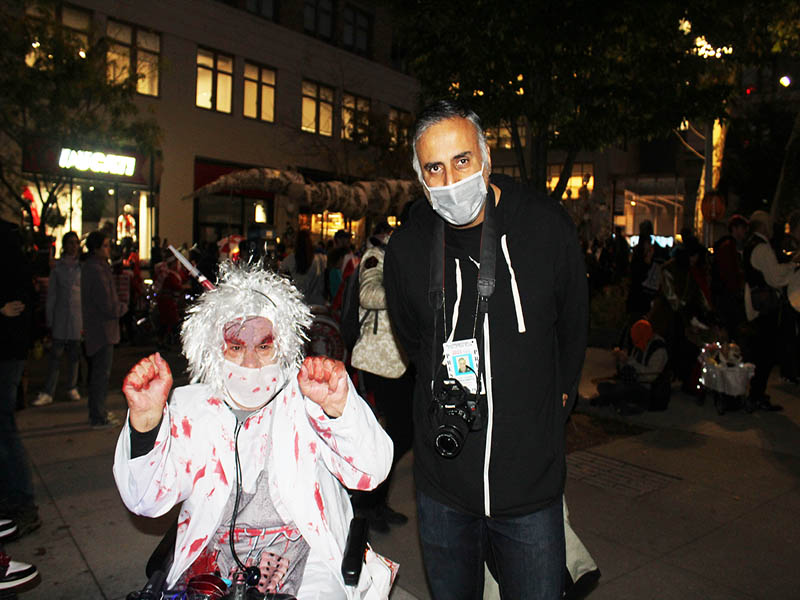 Dr Abbey With an Disabled attendee in Costume

The 48th year of the parade also featured floats, dancing and music from 53 bands.

The event’s artistic and producing director Jeanne Fleming said Sunday night was “the largest parade” she’s ever seen — estimating 60,000 participants and half a million spectators. 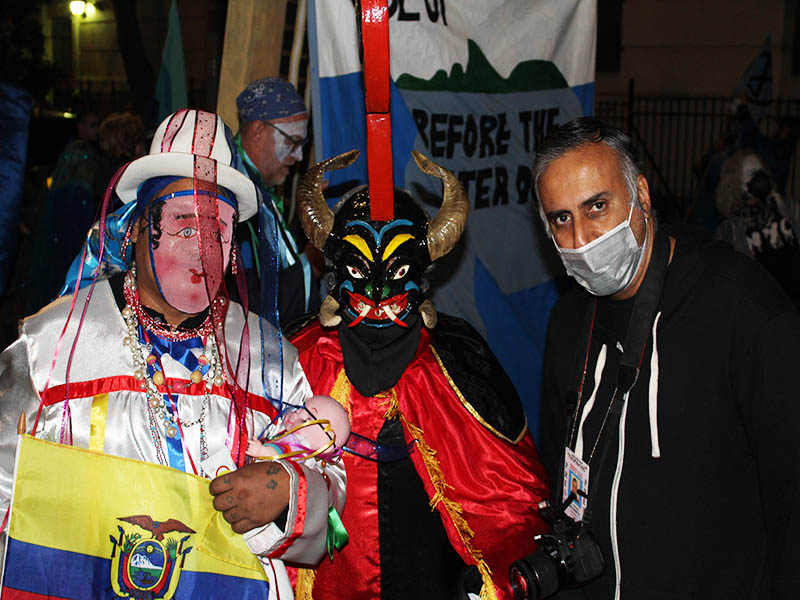 “This is more than I can ever imagine,” Fleming said. “This is the heart and soul of New York City. This is people reaching into their hearts and doing something for each other,” she added.

In addition to the COVID-themed costumes, revelers dressed in typical Halloween get-ups, including zombies, Grim Reapers, witches, Jokers and clowns. 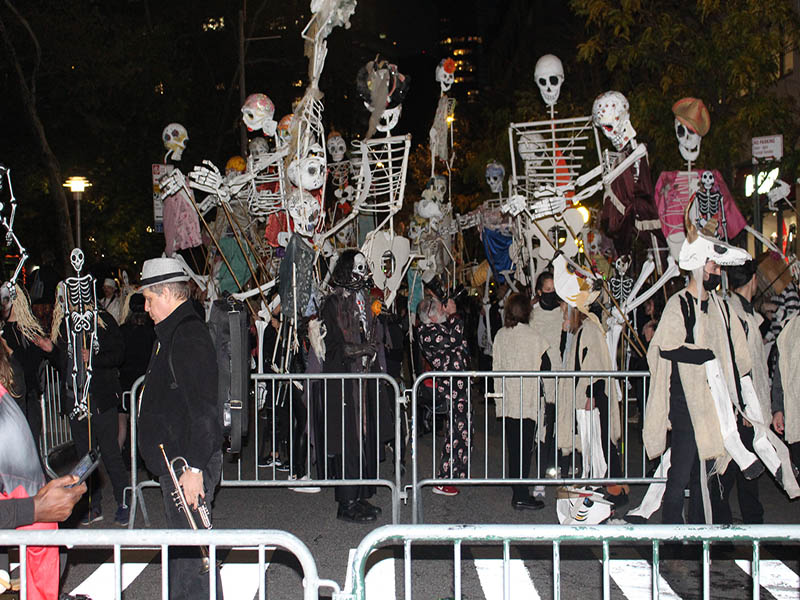 Some attendees traveled from as far as the west coast to witness the celebration. 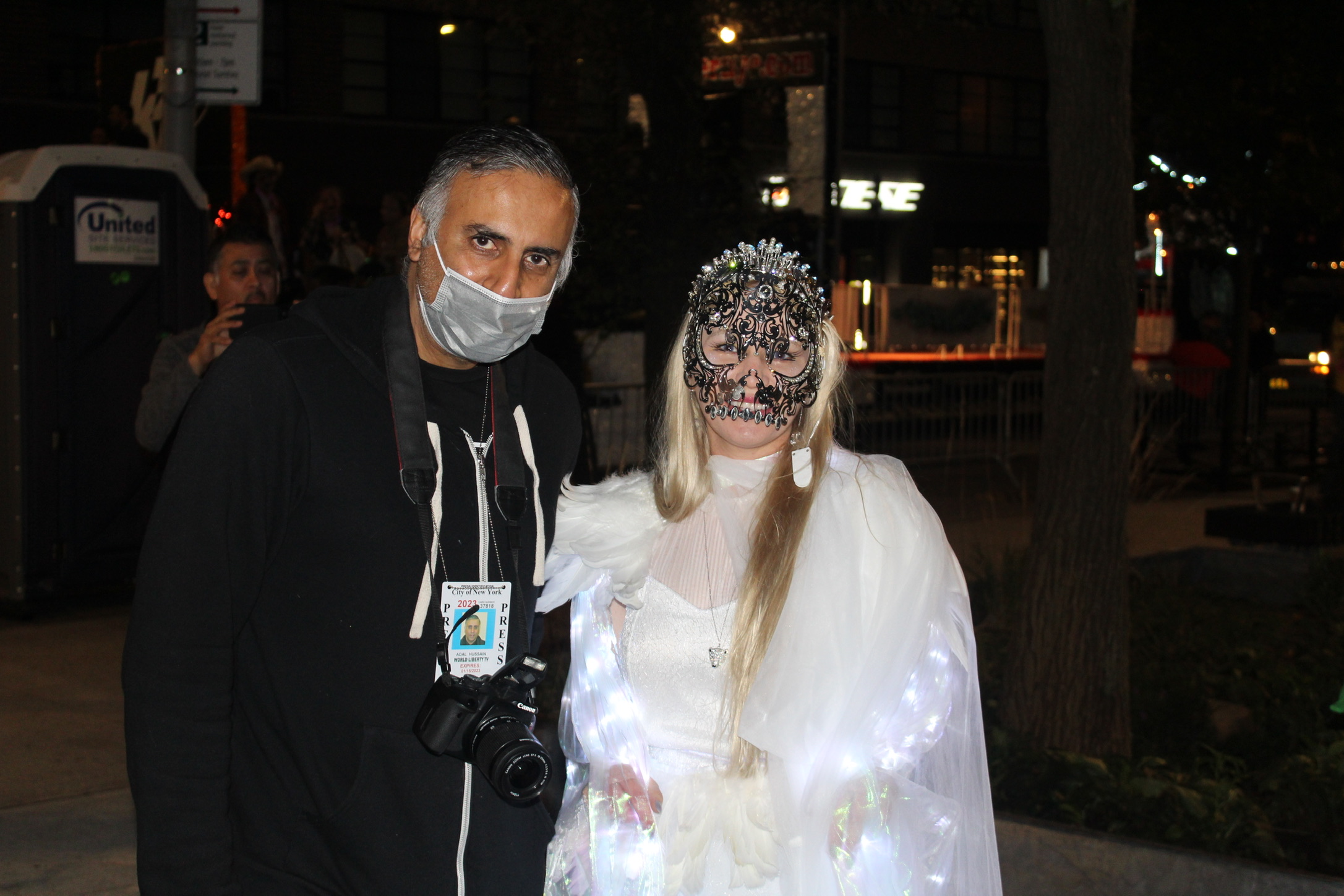 One of many woman wearing Costumes

In children’s songs, these simple words are a cue for everyone to sing the chorus. More broadly they call on us to join voices, move in sync, or pull as a group. But these words take on special resonance as we take to our streets again to celebrate what we missed most – just being together, with friends and with strangers, with loved ones and passersby, with neighbors and with travelers from afar. No one has felt this more keenly than children, so this year, children lead the return of New York’s Halloween Parade! 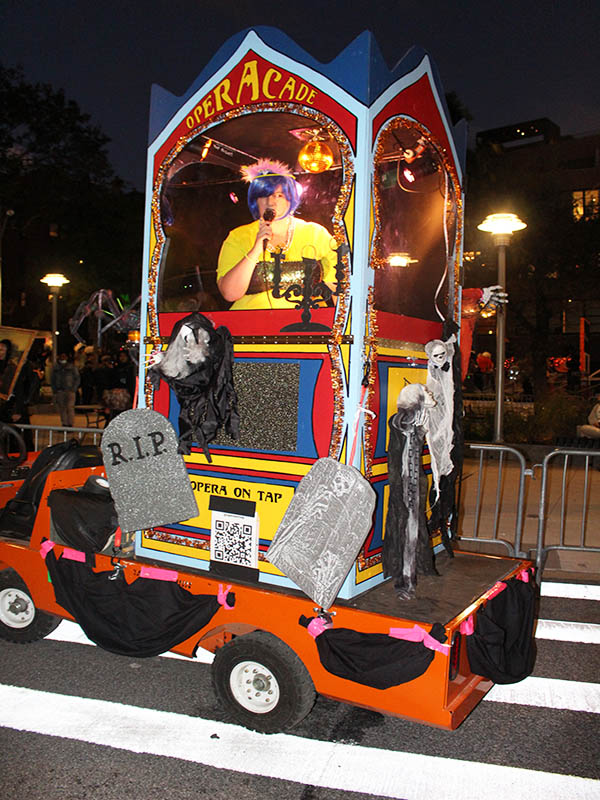 The Halloween Parade, for all its radical eclecticism and individual expression, is at its core a unified moment of playing, masking, and dancing all together.

After nearly 50 years of evoking Gods and Monsters and embodying fantastical tales and heroic figures, NY’s Village Halloween Parade returns to the streets with the most epic story of all – the story of us, the story of “everyday people” resilient in our joy, determined to dance through dark times, and heroically devoted to one another. 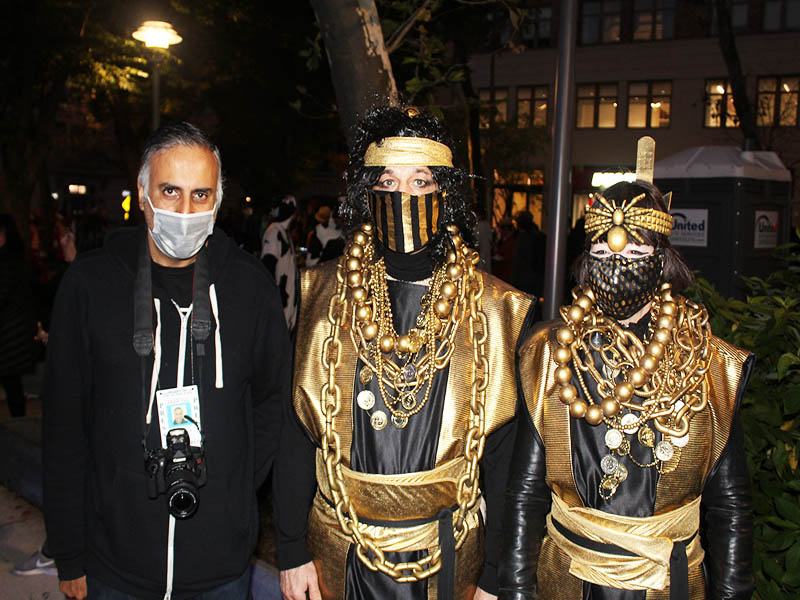 So, we are working with the Children’s Museum of the Arts to invite the children of New York to design this year’s puppets to honor whomever and whatever brings them everyday joy, even when times are tough.

We are calling for drawings of people, animals, and objects at play – which official Parade artists at Processional Arts Workshop will transform into giant illuminated puppets to lead the way, as we bring life back to the streets of New York. 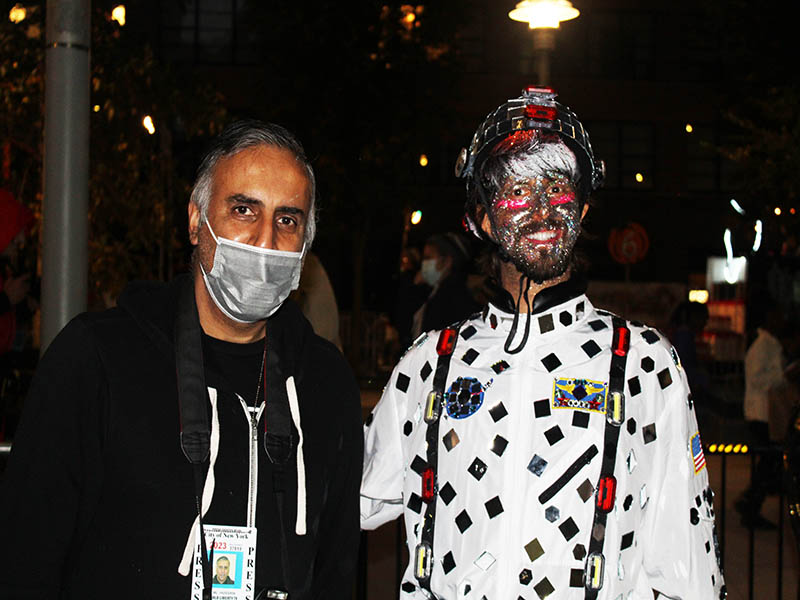 The costume theme is “Let’s Play” and organizers encourage paradegoers to think about dressing from game show-related ideas all the way to baseball players and even decks of cards this time around.

“A lot of people will keep their costumes secret until they arrive. One of the fun things is not knowing,” Fleming said. 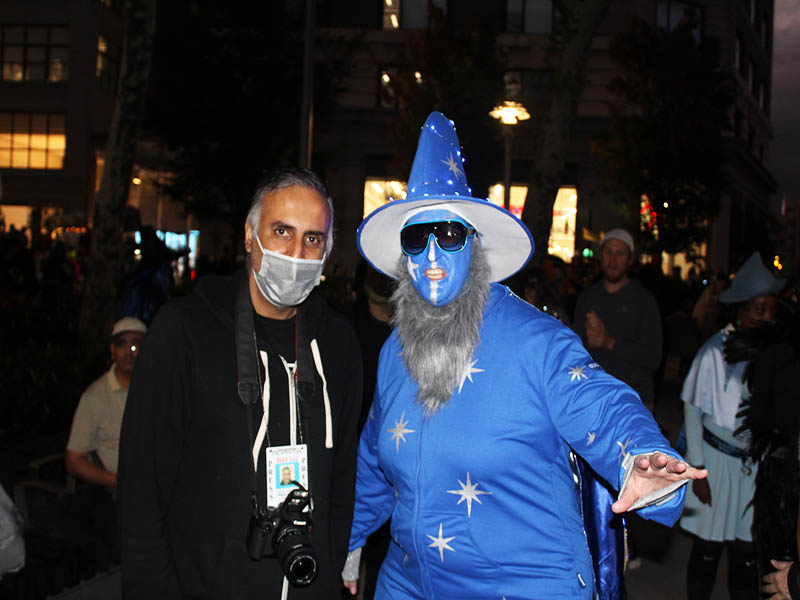 Dr Abbey with a Wizard

Because of that highly anticipated reunion, the parade will be incorporating a second theme as well, “All Together Now,” which harps on the sense of community, especially for New York City who had to stay at home last Halloween. 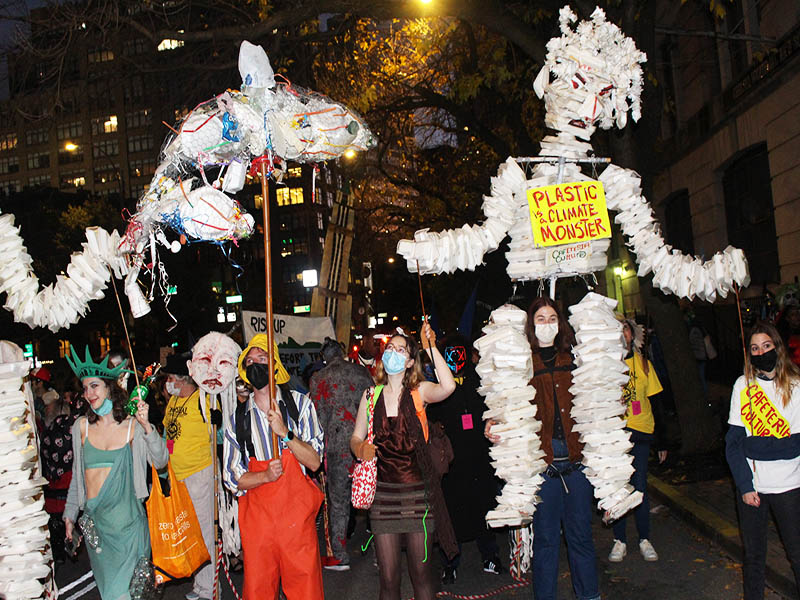 Plastic is an Climate Monster

Those local children were given the chance to make puppets on whatever topic they like to be featured at the front of this year’s parade as a partnership with the Children’s Museum of the Arts, which sits near the parade route on Charlton Street in Hudson Square.

As for the when and where, the parade’s route will run along Sixth Avenue from Spring Street to 16th Street. The parade lineup begins on the avenue at 6:30 p.m. and runs until 9 p.m. between Spring and Broome streets. 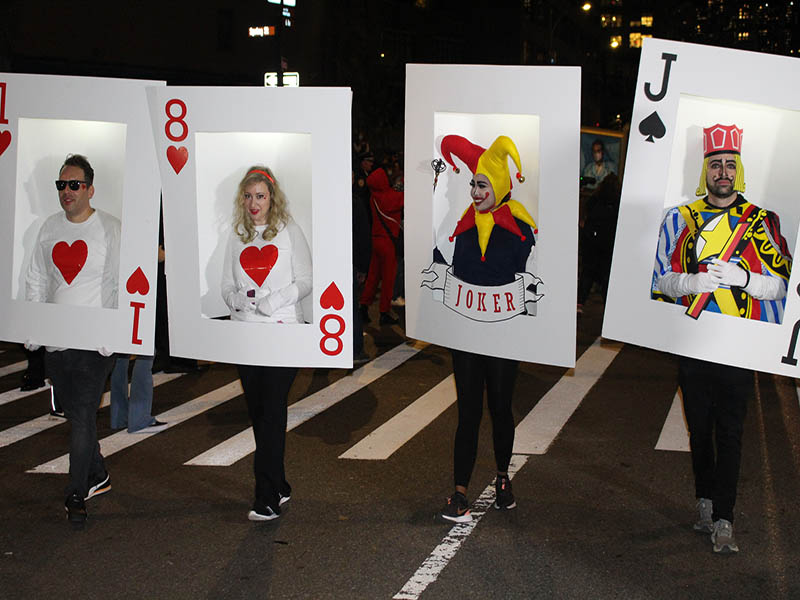 Marchers can only approach Sixth Avenue from the east or south as Spring Street will be closed for the festivities.

Along with marching and watching from the sidewalk for free, there are VIP ticket packages that allow people to skip lines, ride on floats and walk alongside Randy Rainbow in addition to other perks. 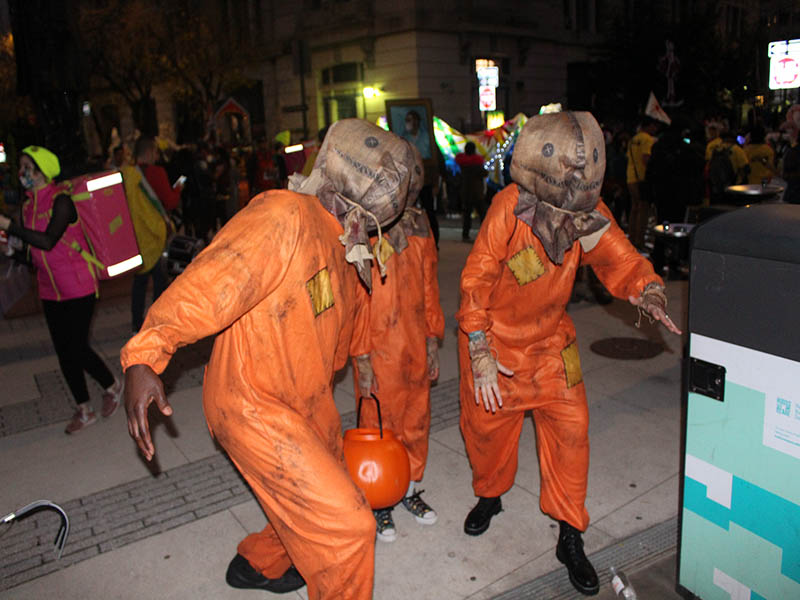 Participants must wear masks, and those watching street side are encouraged to wear decorated masks as well. The parade was televised on NY1 at 8 p.m. 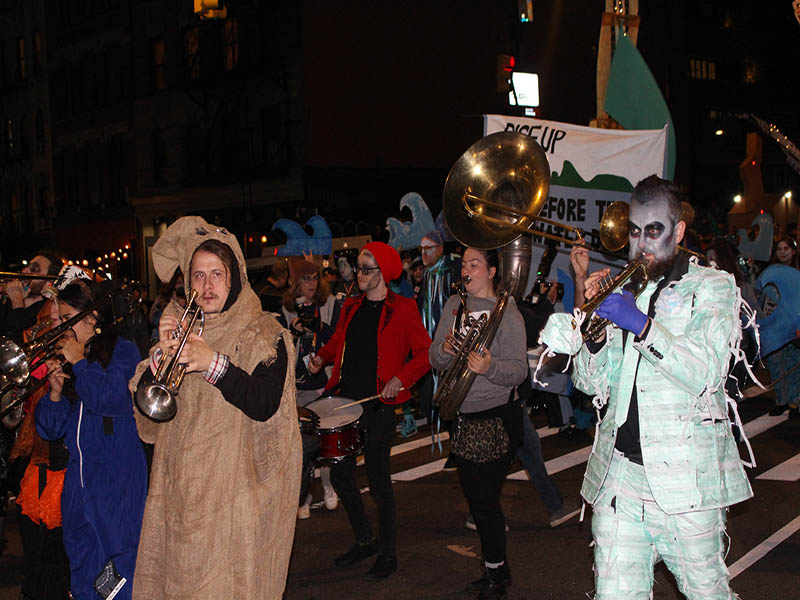 It was World Liberty TV Teams 15th Annual Appearance covering the Parade and we look forward to covering many more and showcasing it to many of our readers and subscribers. See more in our World Liberty TV, Cos Play Channels and blogs by clicking here.