The famed celebration kicked off at 9 a.m. from Central Park West and 77th Street to cheers of eager spectators as it embarked on its traditional two-and-a-half mile trek south through Midtown, signaling the official start to the holiday season. 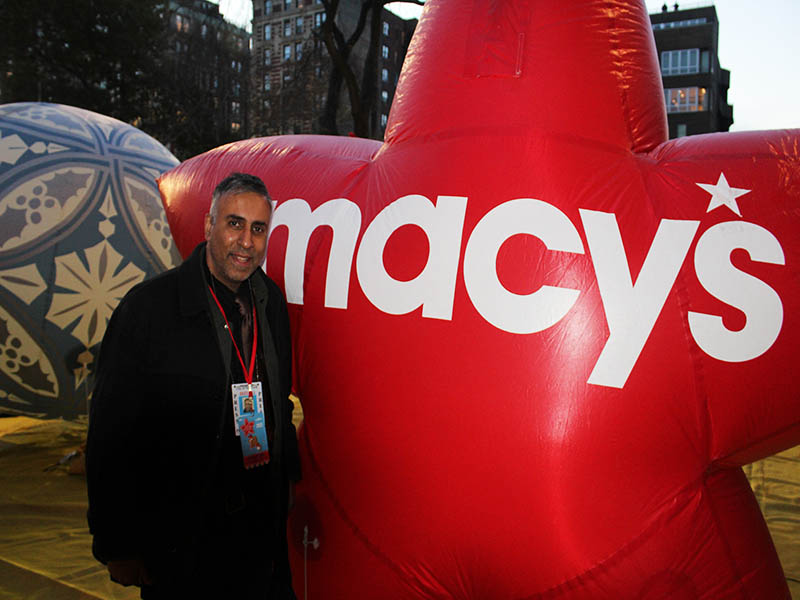 Last year, the route was trimmed to a single block due to pandemic precautions, which also barred spectators from turning up to watch.

While kids under 12 weren’t allowed to march in the parade this year, the spectacle was allowed to go on with few pandemic restrictions aside from a recommendation that parade goers mask up and a requirement that all participants be vaccinated. The holiday festival brought swarms of tourists and locals who lined up early Thursday to ensure they had a good spot to watch the 28 floats and 15 oversized balloons make their way through Manhattan. 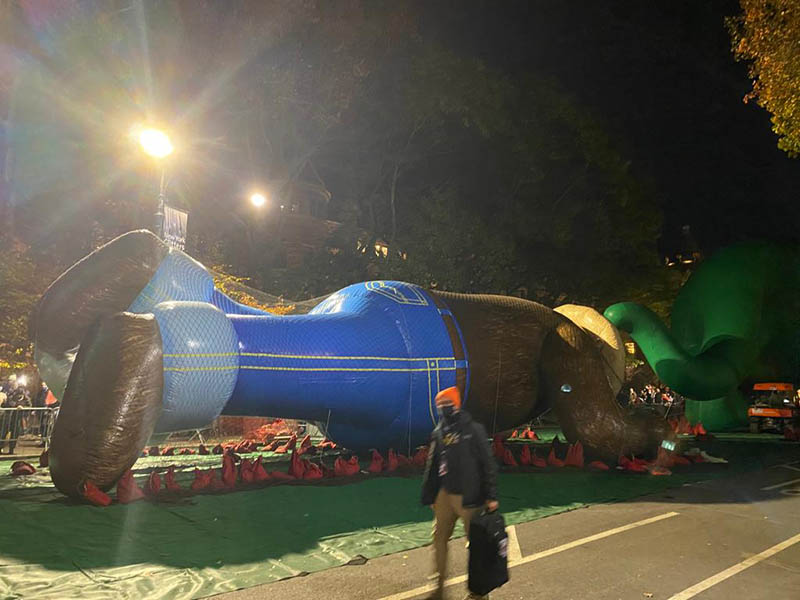 Longtime classics like Snoopy, Spongebob and Papa Smurf were back once again but newcomers like Ada Twist, the scientist from the animated children’s Netflix series, and the beloved Baby Yoda from “The Mandalorian,” made their parade debuts.

“For more than nine decades, the Macy’s Thanksgiving Day Parade has served to bring joy to millions, who gather with friends and family to experience this one-of-a-kind holiday celebration along the streets of New York City and in homes nationwide,” Will Coss, the parade’s executive producer, said in a statement. 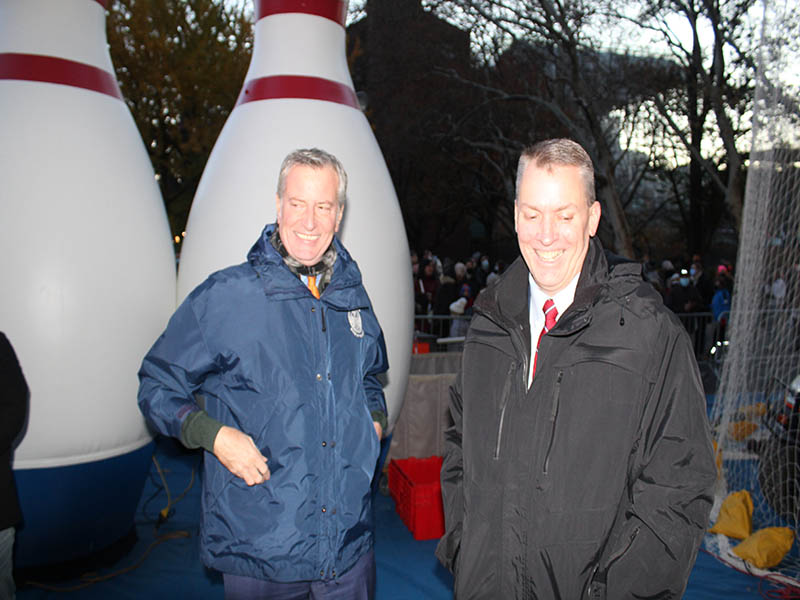 “For our 95th celebration, Macy’s has created a spectacle to remember featuring a dazzling array of high-flying balloons, animated floats and incredible performers. We can’t wait to help New York City and the nation kick-off the holiday season with the return of this cherished tradition.” Spectators at home can tune into NBC to watch the parade live from 9 a.m. to 12 p.m. In addition to the NBC broadcast, for the first time, viewers can also watch the fun via livestream on NBC’s streaming service, Peacock, beginning at 9 a.m. across time zones as well as on Fubo.

About Macy’s Thanks Giving Day Parade:  Thanksgiving—comfortable or contentious, there are some things we’ve come to expect from this day each year. Whether it’s the presidential turkey pardon, watching the big game, or eating too much, many families have time-honored traditions and individual ways to celebrate. But some of the things we consider Thanksgiving staples, like the Macy’s Thanksgiving Day Parade, weren’t originally part of the holiday at all. 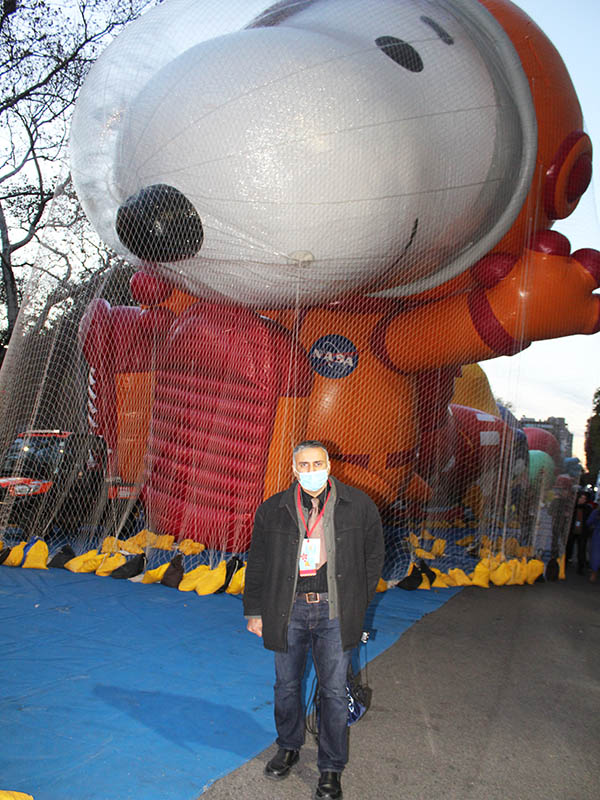 When Abraham Lincoln created the national holiday in 1863, states began to develop their own ways to celebrate. Here in New York, we began Ragamuffin Day. This tradition, which started around 1870, sounds a lot like our idea of modern Halloween.

Children would get dressed up, though not in what we might consider typical costumes, or anything as fancy as the kids in this drawing, but as caricatures of beggars. They would stop and ask neighbors or people on the street for goodies and were usually rewarded with pennies, apples, or pieces of candy. Around the time of the Great Depression, this practice started to fall our of favor, and evolved into the Ragamuffin Parade, also held on Thanksgiving day, which was eventually over shadowned by the Macy’s Parade. 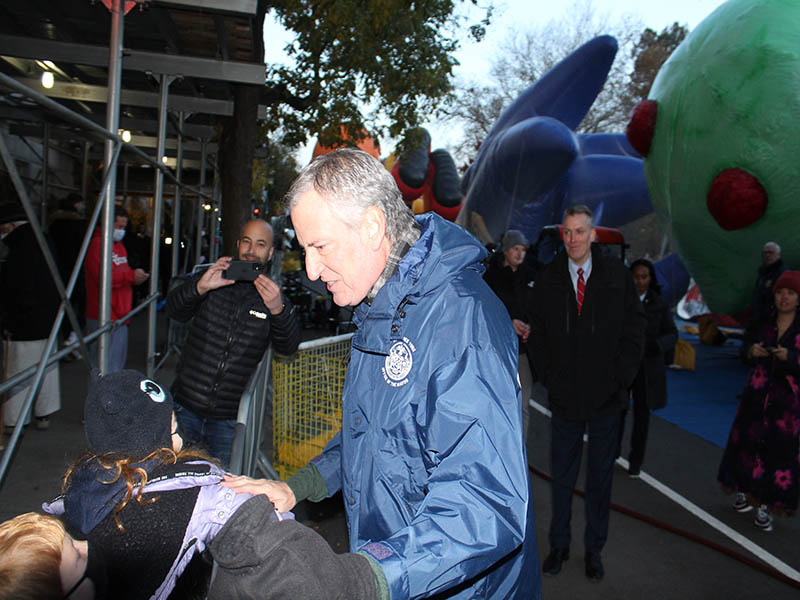 Mayor Bill De Blasio Speaking to Tourists and Welcoming them

While the Macy’s parade isn’t the only Thanksgiving Day parade, it is considered one of the world’s largest, and among the oldest—it began in 1924. The first year, three balloons, four bands, and zoo animals from the Central Park Zoo walked from 145th Street and Convent Avenue to Macy’s on 34th Street and Broadway. 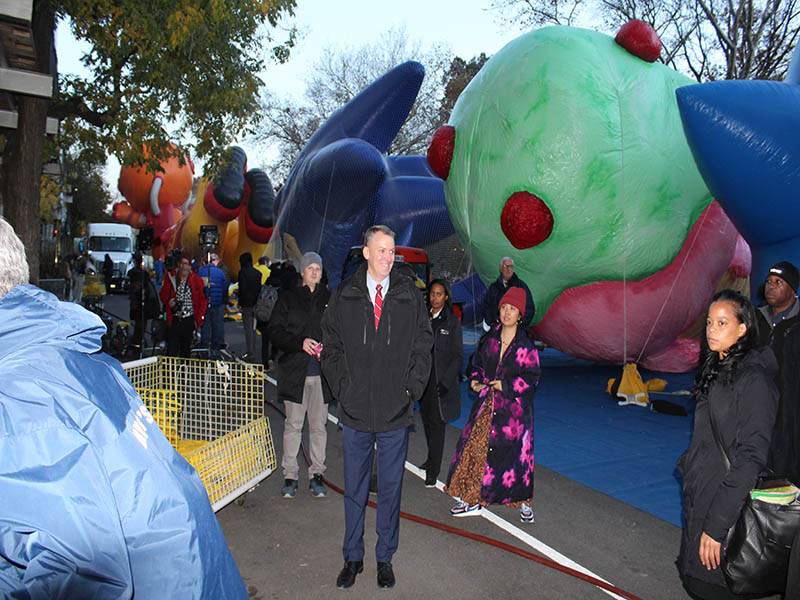 Though organizers hoped the real animals, like tigers, camels, elephants, and donkeys would engertain the younger audience, they actually frightened the children. They experimented with different things to replace this spectacle, and created the first giant balloon depicting Felix the Cat, which was  propped up above ground by long, thin sticks. In 1927, balloons started to make a larger appearance with the help of helium, allowing them to soar down the crowds of New York City. 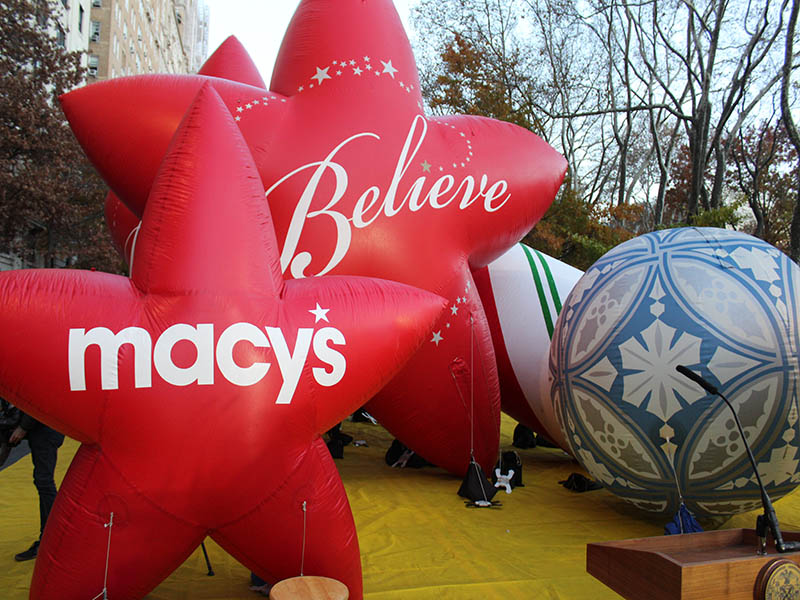 At the end of the parade, these giant balloons were released into the air. Macy’s began offering rewards of money to anyone with a returned balloon. This experiment did not last long, and for good reason! The tradition came to an end when a loose balloon became entangled in the propeller of a small plane almost causing an accident. Soon after, balloons were deflated, crated and stored for their next use—a practice that continues through today. 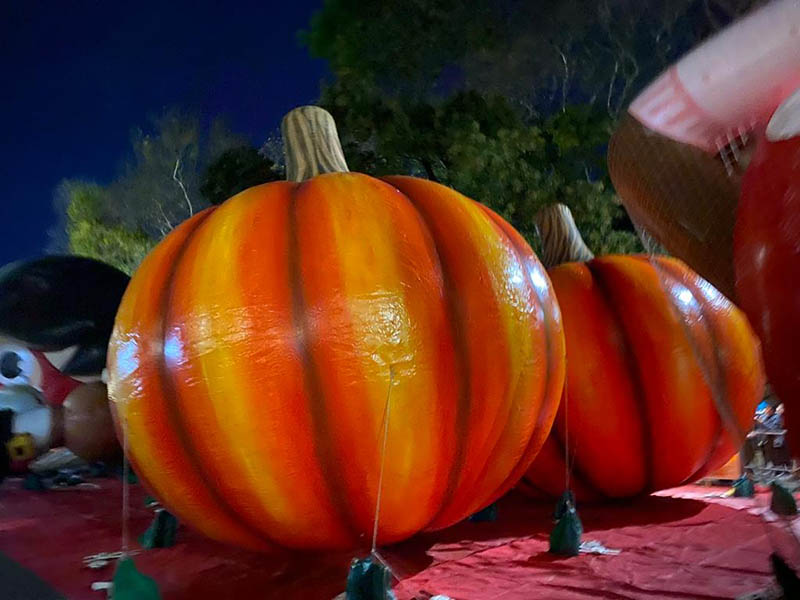 What started off with three balloons has now grown into dozens. It is safe to say that the balloons have a way of tracking the country’s progress and interests as each era inspires innovation. Over the year’s balloons have included familiar cartoon characters such as Mrs.Katzenjammer, (the first female balloon) Olive Oyl, Snoopy, and more.Despite the parade being an annual event, there was a hold in this NYC tradition. During World War II, not only was there a helium shortage, but Macy’s also donated 250 pounds of rubber to the fight. 1942 to 1944 has been the only years where the celebration has been called off, besides the poor weather conditions in 1971. 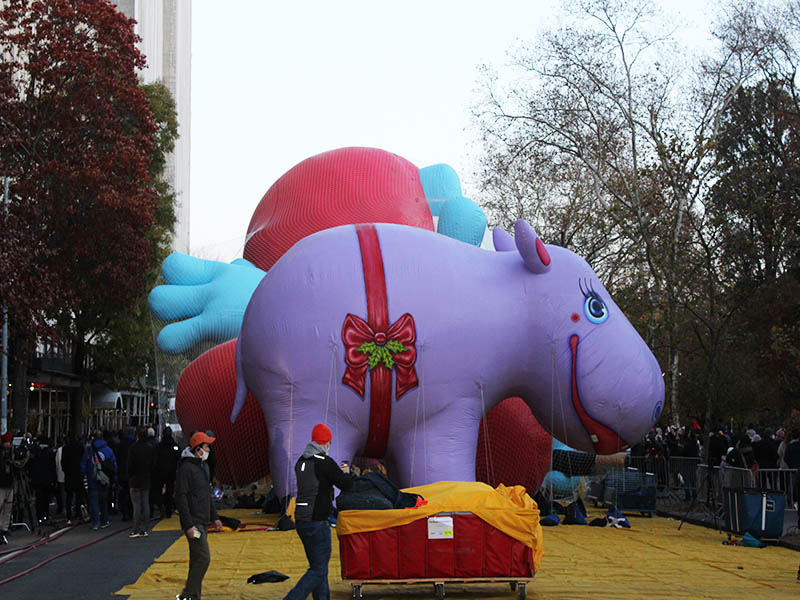 Today’s Thanksgiving may include mainstays like turkey, stuffing, potatoes and pumpkin pie, and the company of friends and family, but it will also include an integral part of the Holiday in cities across the United States, parades. 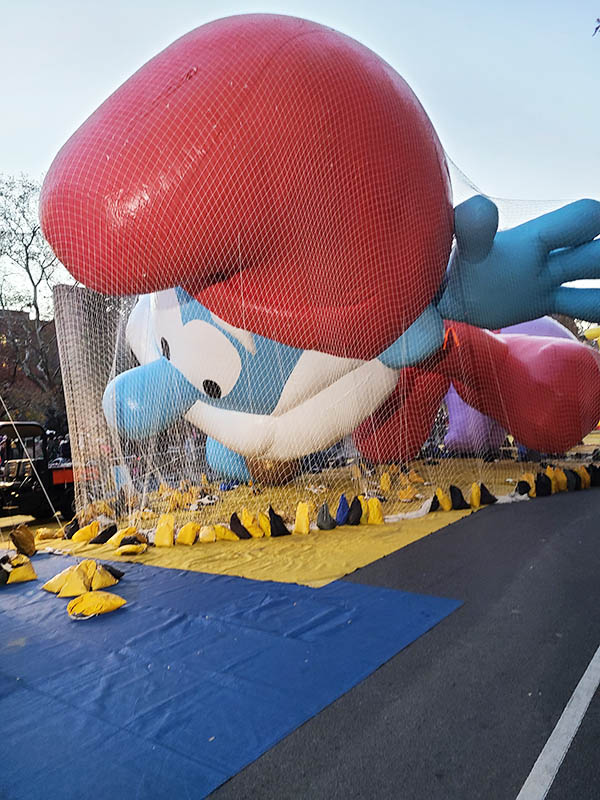