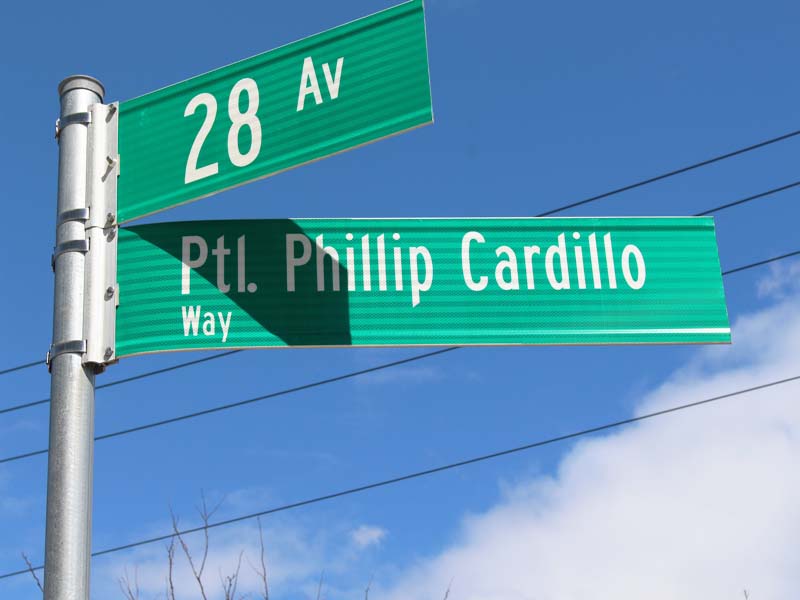 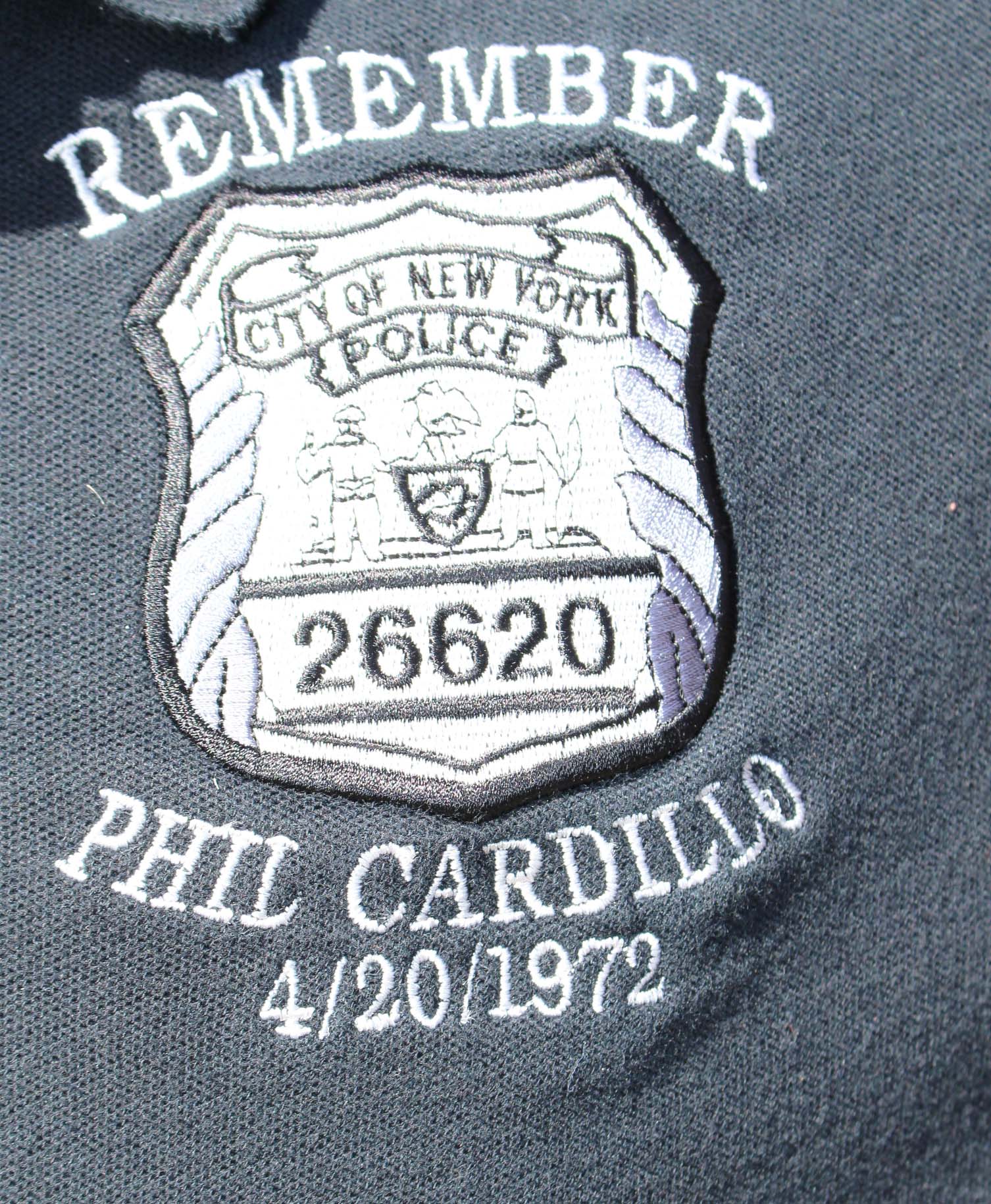 To date, no one has ever served a day in jail for the crime. Additionally, for the past 4 years, the FBI and the NYPD have been withholding evidence in the Cardillo murder case. The watchdog group Judicial Watch sued the FBI and NYPD in New York State Supreme Court for failing to produce records in the case. The FBI is not releasing any investigative files, because the NYPD now claims there is an active investigation. Why would the FBI and especially The NYPD not be forthcoming with the information we are seeking. Does the cover-up continue?NYPD Patrolman Phillip Cardillo, more than 43 years after he was fatally shot in the controversial Harlem Mosque incident. 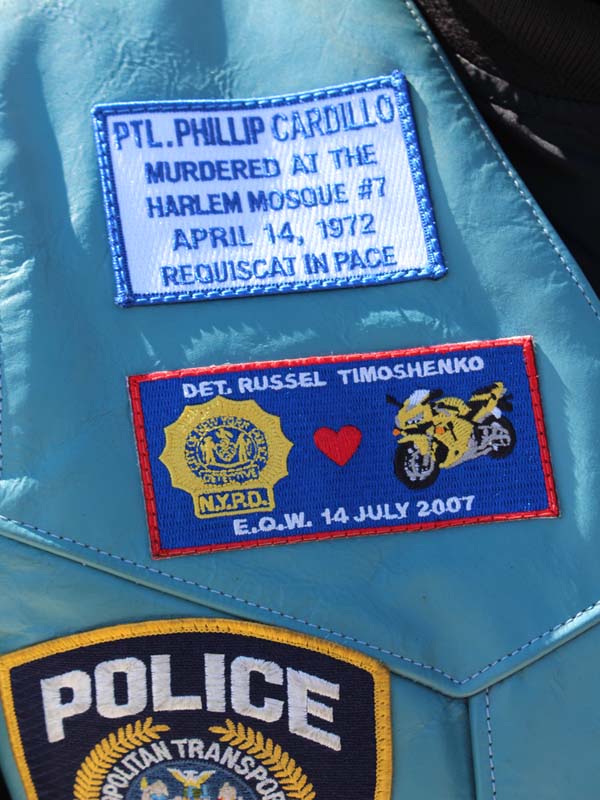 The badge says it all

In attendance at the day of remembrance, who spoke: Inspector Andre M. Brown Commanding Officer 28 Precinct, PBA Manhattan North Financial Secretary Joe Strong, Senator John Liu, NYPD Assistant Chief Chaplain Monsignor Robert J. Romano, who did the opening and closing prayers., and Randy Jurgensen , Former New York Police department detective who investigated the Homicide of Phillip Cardillo spoke in detail, about , what had happened and forty nine years later, that the NYPD and FBI, were not giving certain information, which could possibly solve the case one and for all, Mr.  Jurgensen went on to say, that an Journalist was investigating and writing a book about this and hopefully that might shred  some light on this case. 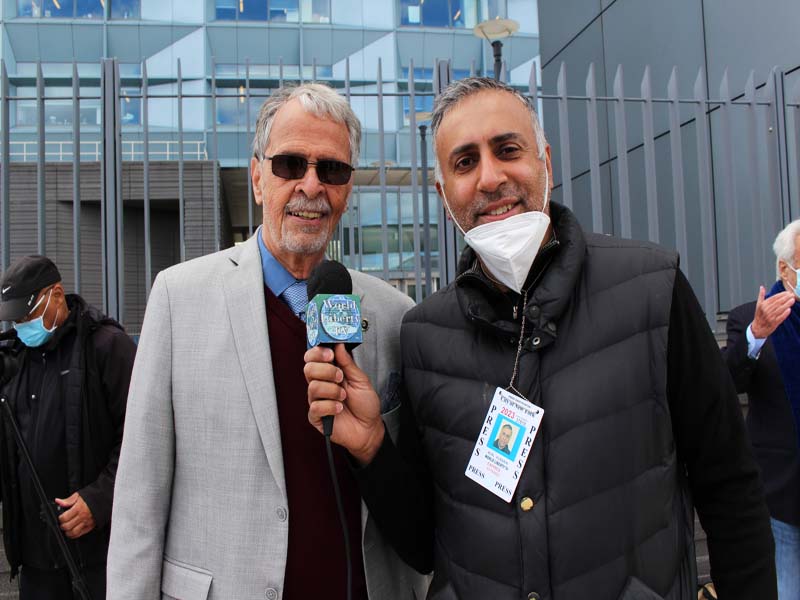 About Phillip Cardillo: Just over a week after the Police Department christened a brand-new, harbor launch in memory of Cardillo, the New York City Council  unanimously passed a bill Thursday that approves the co-naming of 28th Avenue in College Point, Queens–outside the new Police Academy–in honor of the slain patrolman. 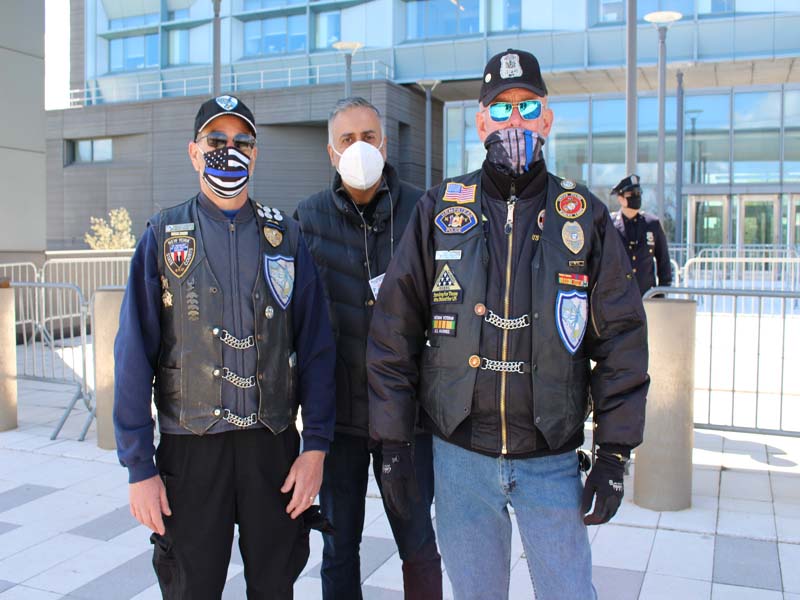 There is some  symbolism in the number 28.  Patrolman Cardillo served in the 28th Precinct in Harlem.  His family and police supporters spent years trying to get approval for a Cardillo street sign outside the 28th Precinct on Lenox Avenue.  But Community Board 10 in Harlem was reluctant to revisit any reminders of a racially tense time in New York City history.  So, back in November, Community Board 7 in Queens approved a Cardillo street sign for outside the Police Academy in College Point.

3 members of the City Council were present for Thursday’s vote on the proposal, and they unanimously passed it.  Mayor Bill deBlasio, currently on vacation in Europe, must sign the bill into law within 30 days of the vote.Council Member Paul Vallone of Queens, who submitted the proposal, hopes to have the re-naming ceremony in early September outside the Police Academy. 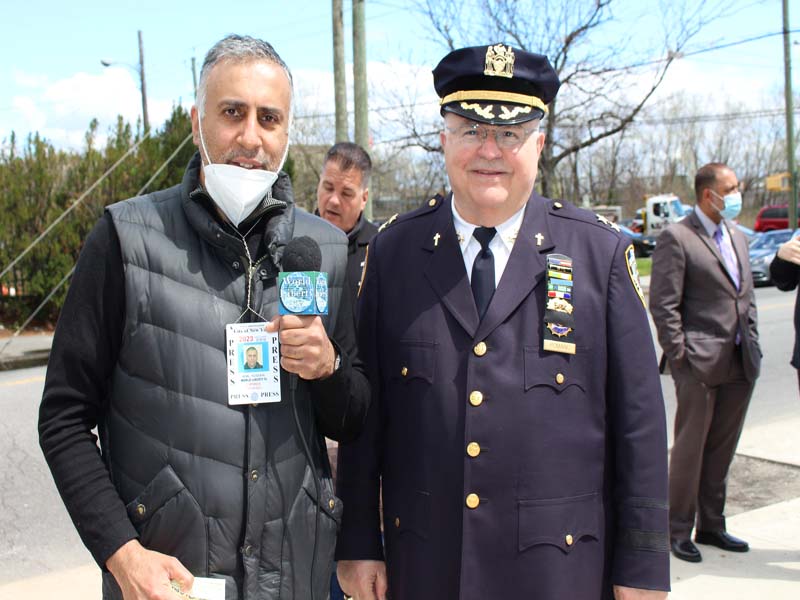 “Hopefully, all the new recruits that pass through will see the name and learn a bit more about police history,” an excited Todd Cardillo said.Cardillo had flown up to New York City just last week to participate in the ceremony naming NYPD Harbor Launch # 701 after his late father.  Todd Cardillo was only a year old, when his dad was killed. 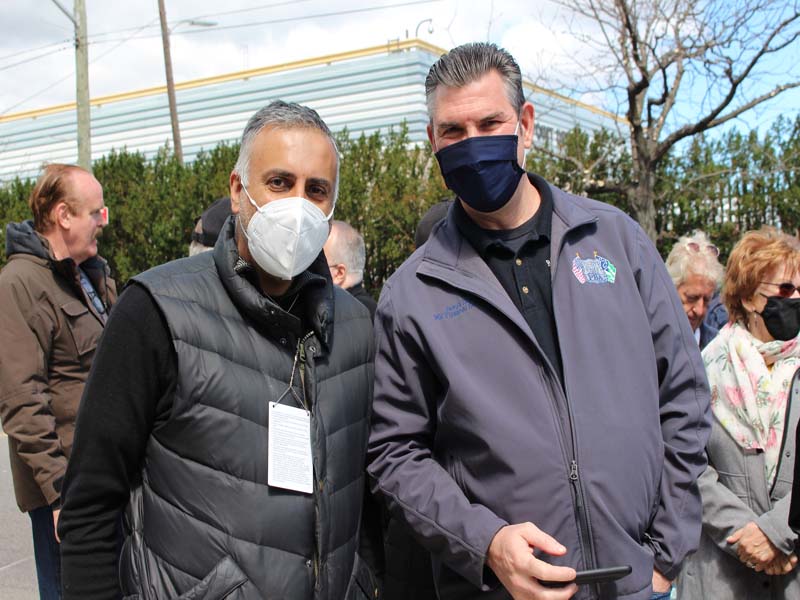 On April 14, 1972, Patrolman Phillip Cardillo was beaten and shot inside Harlem Mosque # 7 on West 116th Street in Harlem, after responding to a phony 10-13 call from inside the mosque.  The mosque was then being run by Nation of Islam minister, Louis Farrakhan.  Cardillo, a 31-year old father of three, small children, died six days later from his injuries.Generations of police officers who never knew or worked with Cardillo passed on the history of the case. 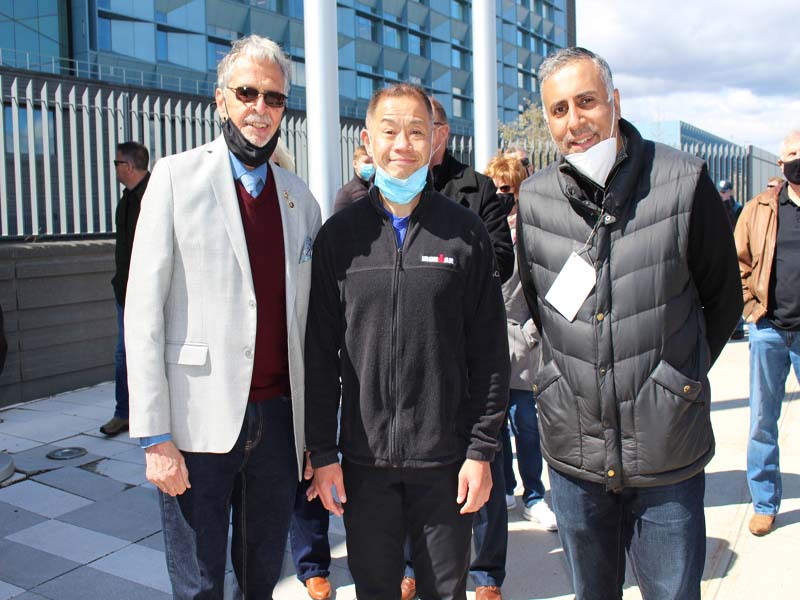 They learned that sixteen suspects were chased to the basement and were being held for questioning, until influential politicians showed up.Minister Farrakhan, .

/40/”>Congressman Charles Rangel, and then-NYPD Deputy Commissioner, Benjamin Ward, arrived at the site and ordered all white cops to leave.The suspects were released, and Nation of Islam members were observed mopping up Cardillo’s blood at the crime scene.

/38/”>Police Commissioner, Patrick Murphy, did not attend Patrolman Cardillo’s funeral.For two years, no one was arrested for Cardillo’s murder. 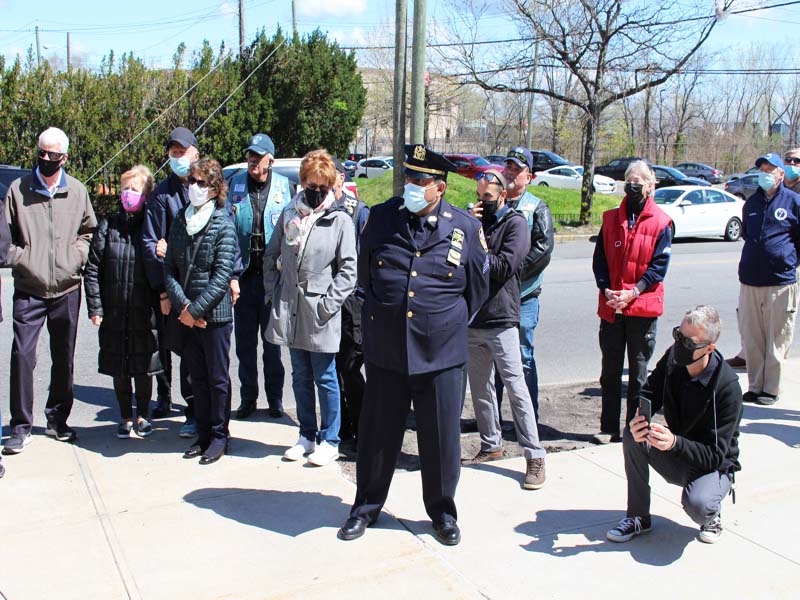 During a three year period in the early 1970’s, 26 police officers were killed nationally by militant groups that targeted cops…with two officers at a time fatally shot in New York City, on multiple occasions.In 1974, a member of Mosque # 7, Louis 17X Dupree, was charged with fatally shooting Cardillo—but after two trials, he was acquitted of the murder charges.No one has ever done a day in prison for Patrolman Cardillo’s death.

Last week, the current Police Commissioner, William Bratton, got emotional at the dedication ceremony for Cardillo’s police boat.He noted that Phil Cardillo kept his promise to serve—but speaking of New York City and the police department, he said, “We did not keep ours.” 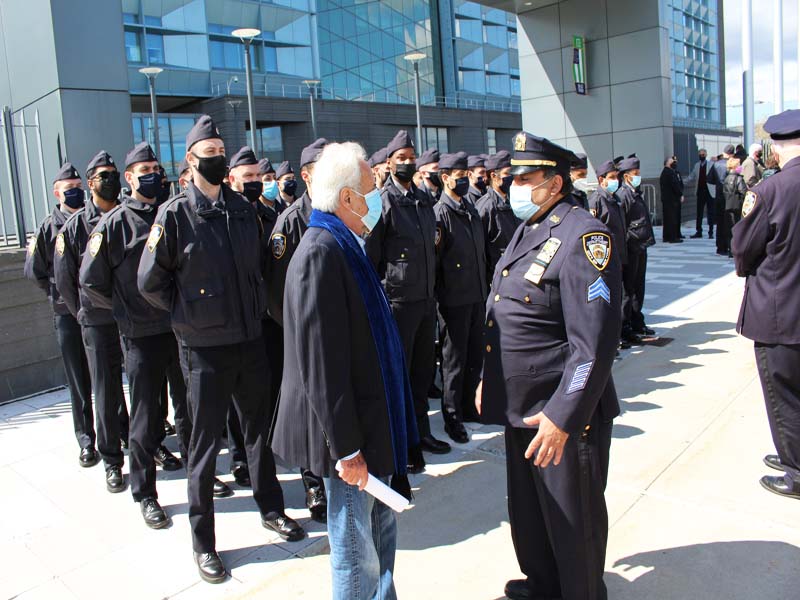 “Part of the compact we have with every police officer is our promise that we will pay homage to their sacrifice, “ Bratton said, choking up. “We did not do that for Phil.  We did not keep our promise, because of the controversy surrounding the incident and tensions at that time.  Neither the Police Commissioner at that time nor the Mayor attended Phil’s funeral.” 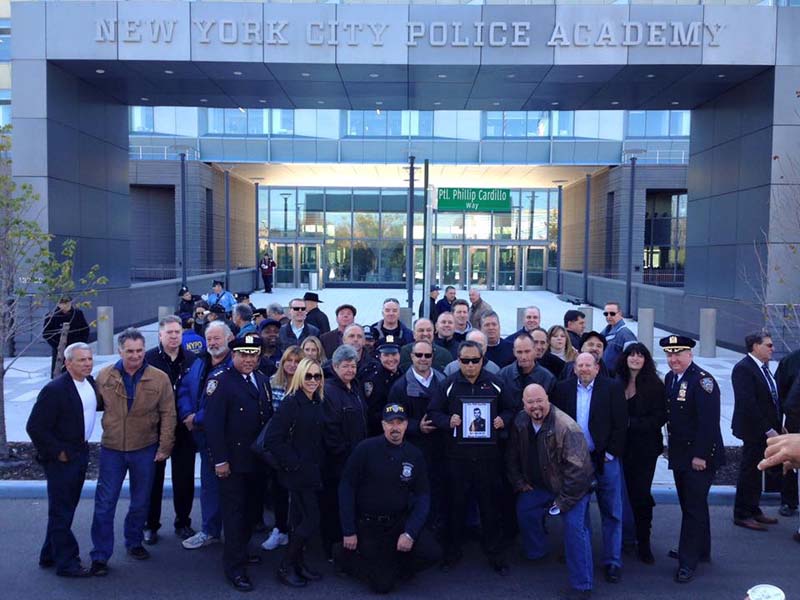 Bratton summed up his dramatic remarks by saying, “It was a shame then.  It’s a shame now.  It was nothing short of shameful.”Now, it’s evident, the New York City Council wants to also make amends.  Council Member Vallone issued a statement after the vote, which said, in part, “May this sign forever remind us of the sacrifices that the men and women of the NYPD are too often asked to selflessly make, as well as serve as a symbol that these sacrifices are never forgotten.  This recognition has been long overdue, and I couldn’t be more proud to right the wrongs from 43 years ago.  I look forward to standing proudly at the street co-naming ceremony with Patrolman Cardillo’s family and all those who have fought to honor his memory.  “Todd Cardillo’s statement was shorter, yet eloquent.  “I’m very excited,” he said.  “I’m very surprised. I’m glad it finally happened. ”I think my dad and my mom are smiling down on us right now.” 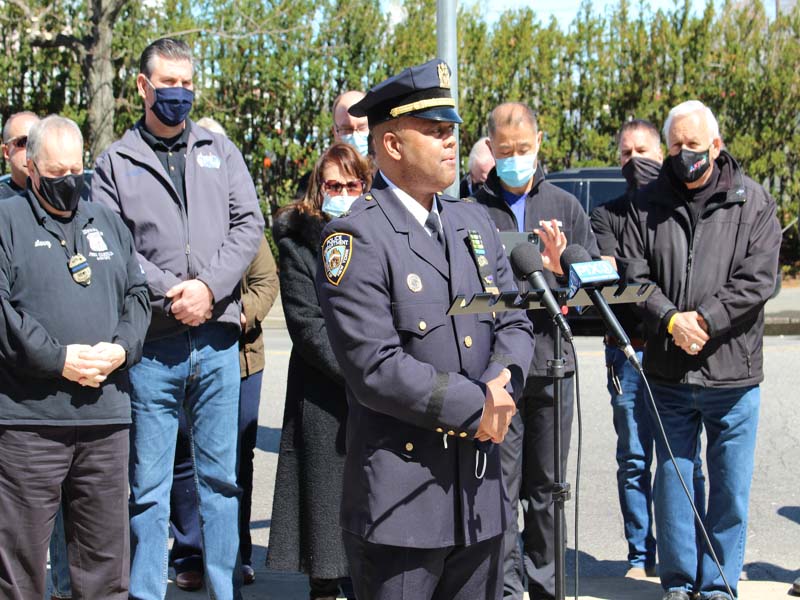 About Randy Jurgensen:  The oldest son of Harlem superintendents, Randy served as both a Paratrooper and as a Green Beret in Korea. His military accolades include three Bronze Stars and the prestigious Purple Heart.  His Army helmet is on display at West Point. 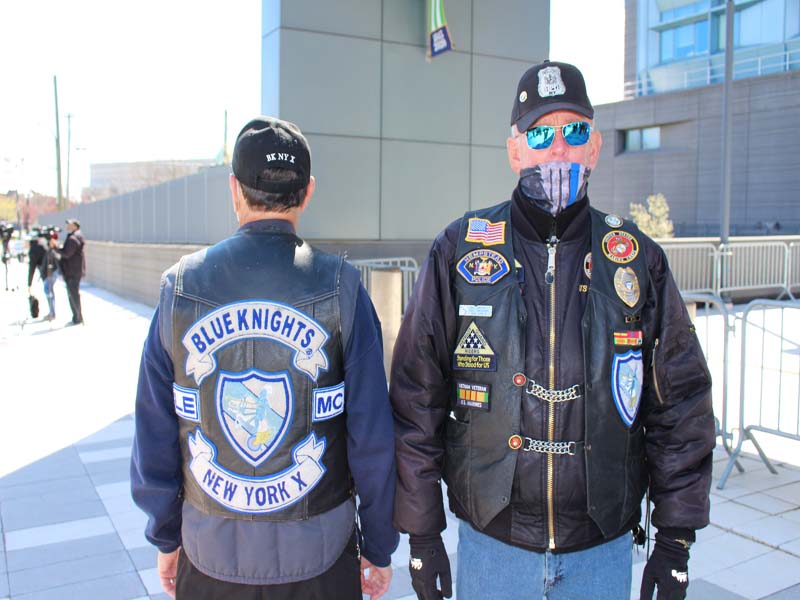 As a detective, Randy worked the streets of Harlem for 16 years, during which time the murder of Police Officer Philip Cardillo became the catalyst for one of the largest scandals in the history of the NYPD. 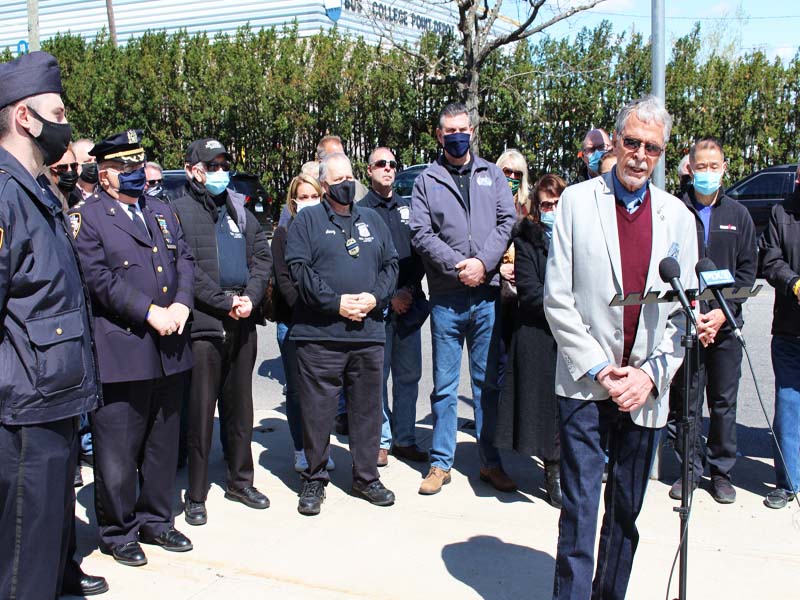 See more about A Day of Remembrance for murdered NYPD officer Phillip Cardillo and exclusive interview with Randy Jurgensen in our World Liberty TV, Political channel by clicking here.