Let me begin, by saying I met Edward Rouse, AKA Ed, approximately 20 years ago, as I just started my career as an journalist, with my Liberty News Online Magazine, which I started with a group of journalist friends. 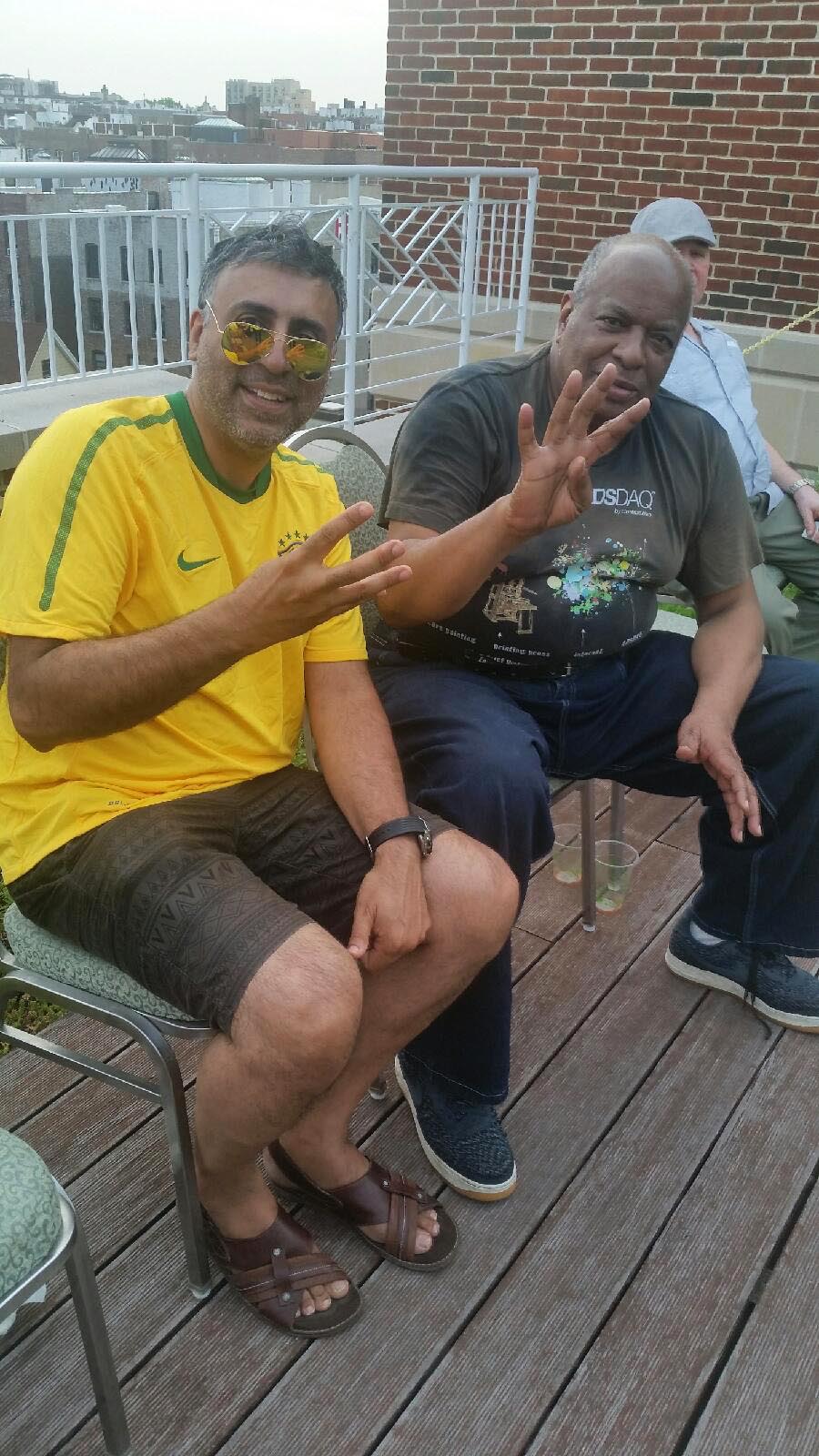 One a few occasions, we bumped into each other at different , events we were covering for our Liberty News Online Magazine, it was at the Hilton hotel , The 100 Black men Gala , where I went and introduced myself to Ed, as I was networking, with different people.

I asked him if he was in the Media business, he said no but he would like to be, he was a highly educated guy, with a BA, MA, and had great speaking skills, so I told him to stop by in my office, so we can speak further, my office was in a lower basement in Jamaica Queens.

He got there on time, actually 20 mins before our appointment, I greeted him and welcomed him to my office, and we started off with our meeting, asked him what he would be interested in doing as an journalist, he told me, he would be interested in helping, me in getting into different events, and networking with different people, I agreed with him immediately as we needed all the help we can get. 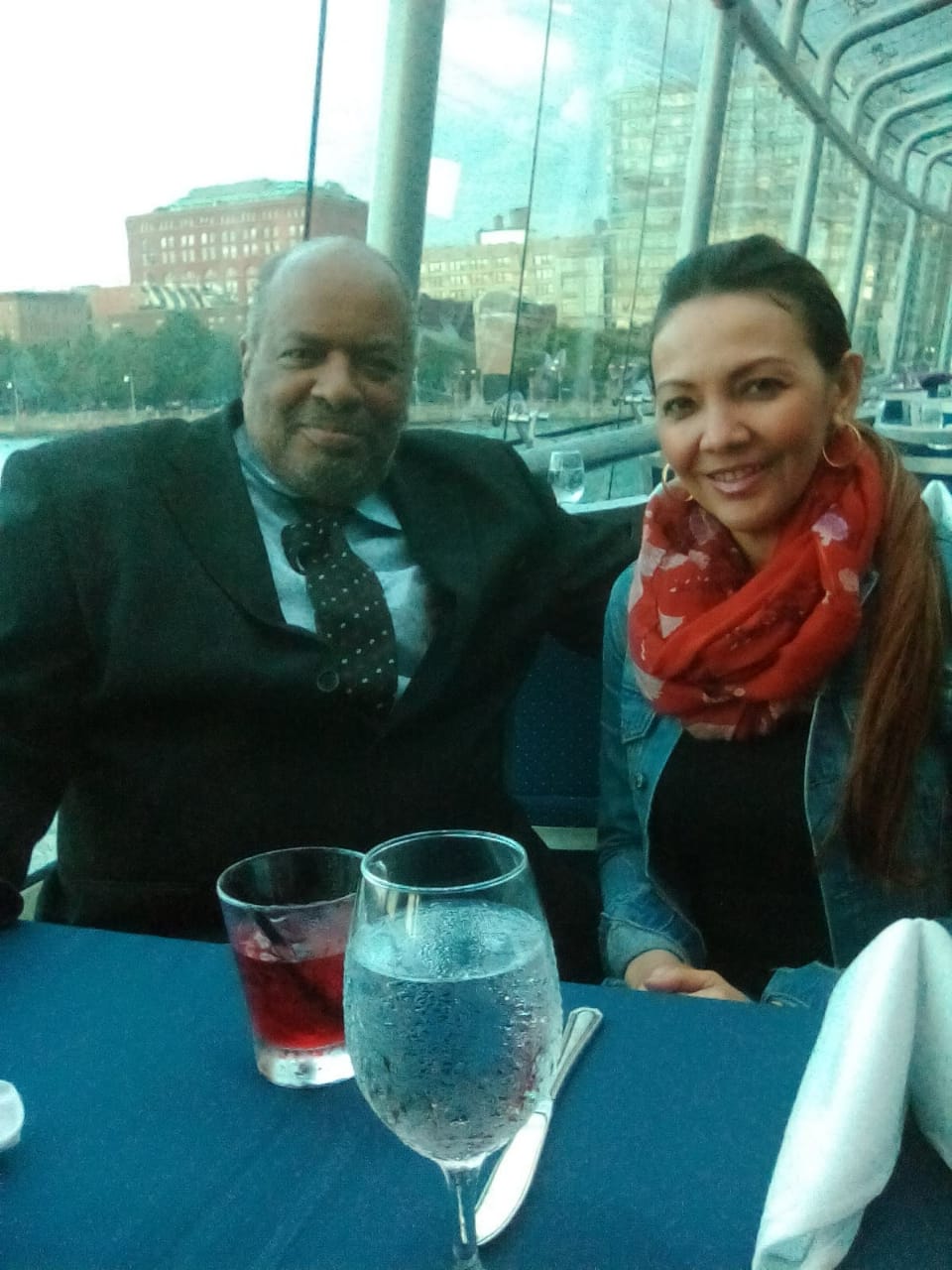 So our long working journey begun, he would call me on a regular basis maybe 2-3 times a day , telling me about different events, he heard about through his contacts, he would forward me there contact information, I will make the calls and RSVP, myself and Ed, to different events which we would attend together, sometimes we would attend 3-4 events a day, From a breakfast, Lunch, Dinner at a gala.

His job was to do networking,  giving out our cards to many people as possible, so our name can be known and more people can invite us, to more events. He also took many pictures of us at these events, with a small silver Nikon camera, as he would say the NIKON Camera has been very good to me, because we took some of the biggest pictures of the biggest names in the world. 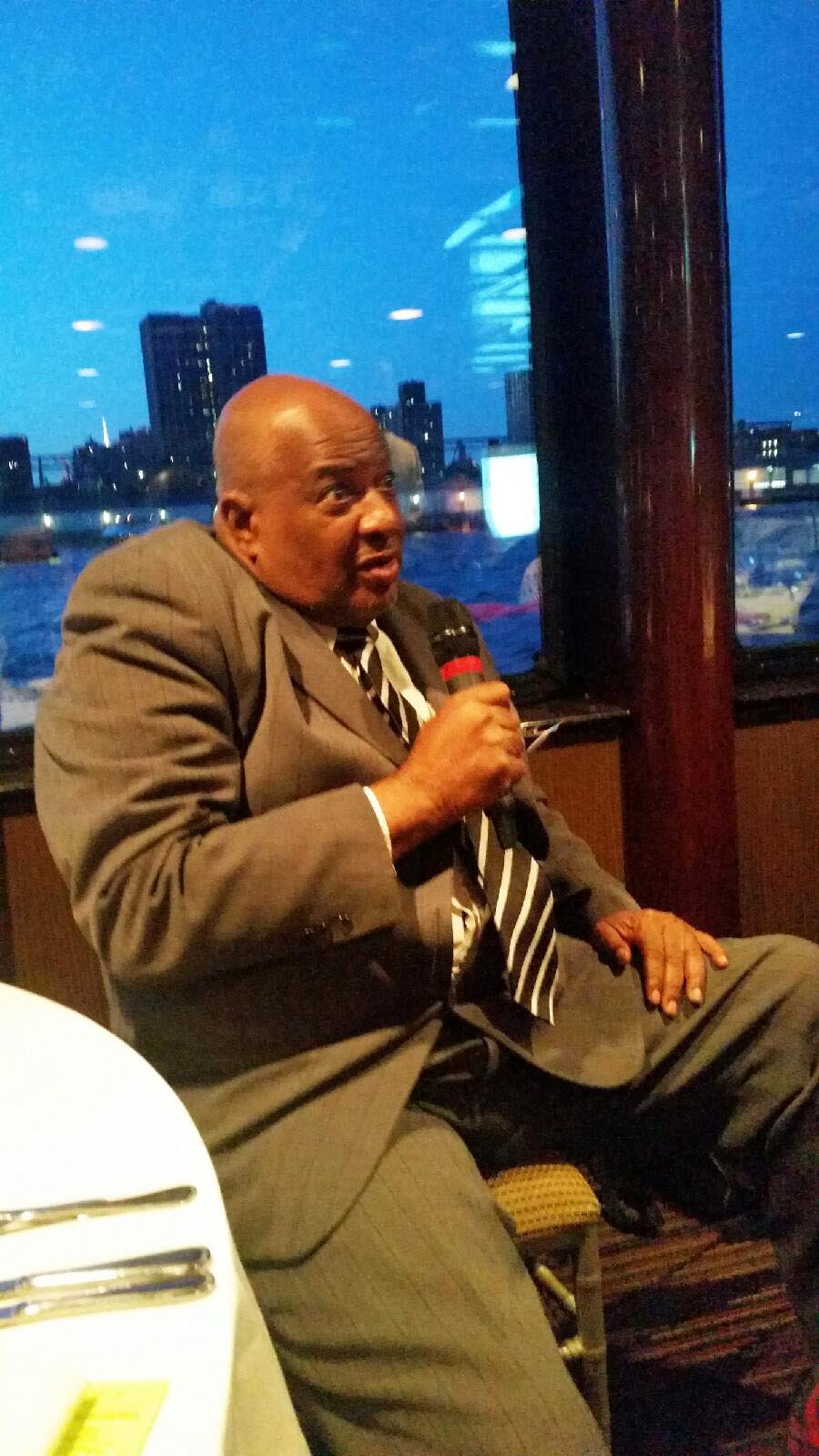 Ed Rouse asking a question at an event we attended together

Ed had taken many pictures of me up to this day, I have on my World Liberty TV, Photo Gallery Archives, President Obama, when he was senator, before he became president, he would take a pic of Me with President Trump, with Rev Al Sharpton, Rev Jesse Jackson, James Brown and me, when president Trump had got into an argument with Rev Al Sharpton, Rev Sharpton had used the picture which I was in on all the different media outlets on his social media platforms, it went viral around the world, seen by over 30 million people.

So through the years we continued, working together going to some of the biggest events in the world, also Ed was a big fan of going to many events at New York Javit’s  center , he was always walking out with 3-4 bags full of swag, he was able to carry the bags with ease, he was 6 ft 5 Inch tall ,weighed around 250 pounds. 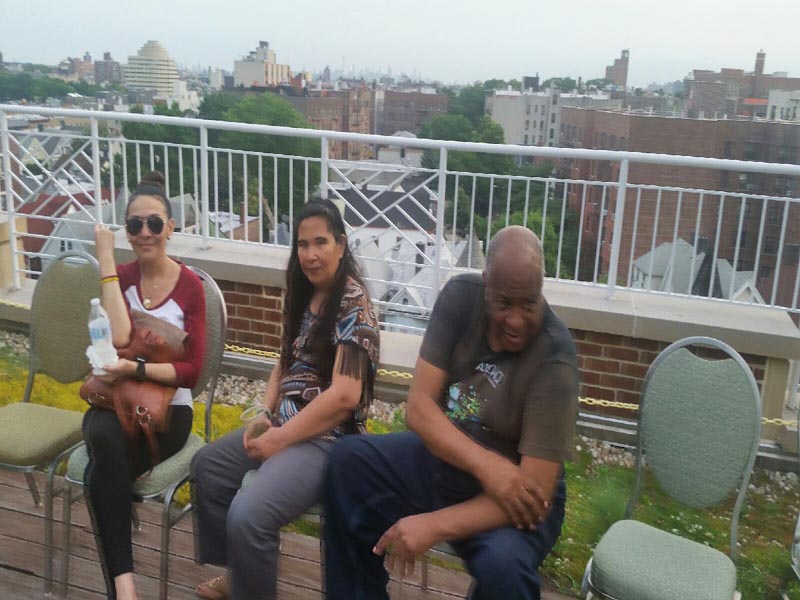 Ed Rouse with Liliana and a guest at 4th July Celebration

He would call on a regular basis, and I stopped receiving calls from him, one week went by, two weeks went by, I heard nothing from, I only had his home telephone number at that time, as cell phones were coming of age at that time, I had no address, he told me he lived in the Bronx.

I made telephone calls to all the local hospitals in the Bronx, and he was not in any of the hospitals, I called a few friends we had known and nobody, had heard from him. 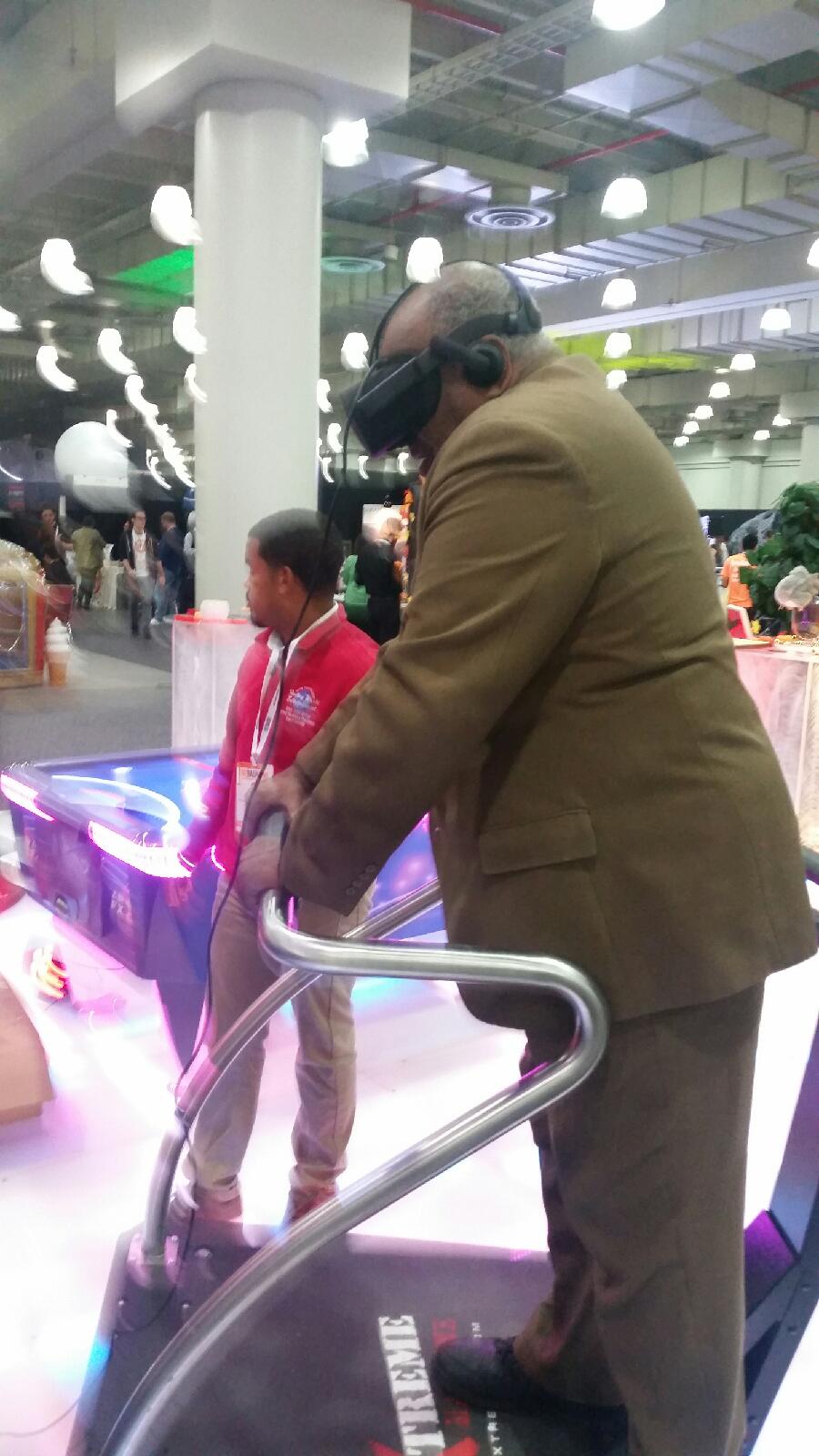 Then 3 weeks later I am working in my office, I hear a knock on my door, and its Ed, I was so happy to see him, and I saw him all nervous and having tears rolling down his cheeks, I ask him what’s the matter , he would tell me his mother had passed away. He had to vacate the apartment, because it was in her name.

So I told him start from scratch, and let me know what was happening, he started telling me ,he was a teacher and got burnt out at an early age and never went back to work after that. He got depressed and was taking medications, and then will go home where he lived in a room with his mother, now she has gone I don’t know what to do. 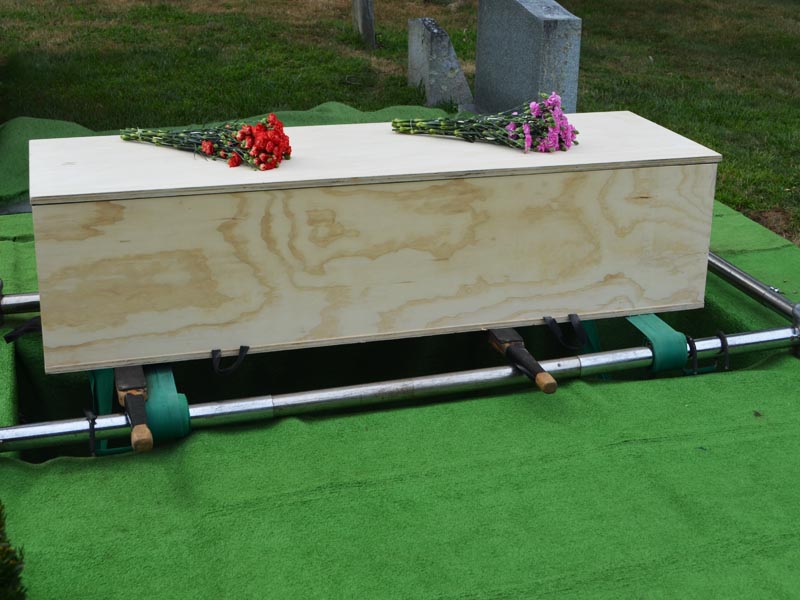 Casket which Ed Rouse was buried in

So I asked him if he had any money to get an apartment, he opened up that he was on public assistance, getting food stamps, and Medicare, and the mother died penniless. So I told him what would you like me to do, he told me he saw a 1 room in the Bronx, not too far from where he lived, and he would want to move there, the only issue was he needed $1000.00 , three months security and to move his things to the room via moving van. 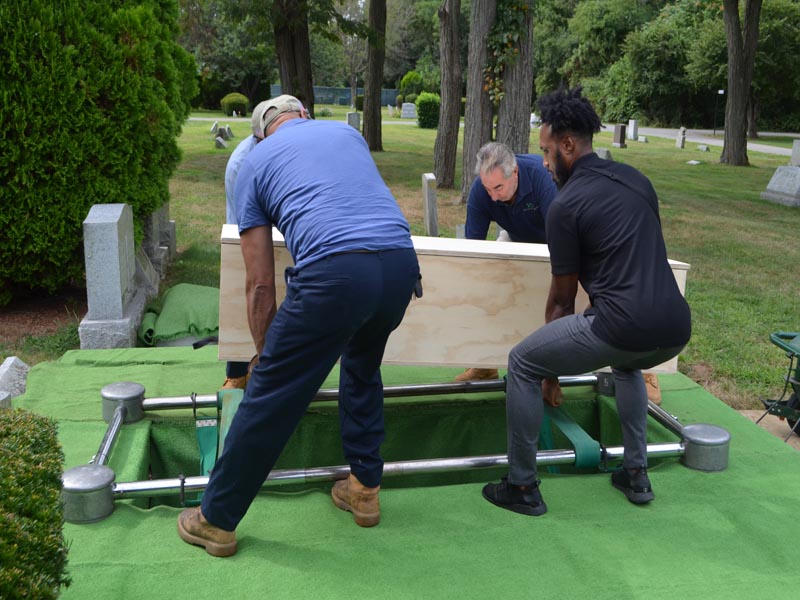 Without thinking I told him lets go to the guy with the room and see what can be done, after seeing the room, it had a bed, 1 table with an old wooden chair, bathroom had to be shared with other tenants, so I spoke with the owner and we made a deal, I took the money in cash $1000.00  out of my pocket, and gave it to the guy, and had the owner type and agreement for an year.

So Ed was able to move in his room, public assistance will pay on a monthly basis, for the rent of the room. After that Ed fell in a depression, as we were very close to his mother, he had stints, put in his heart, he was diagnosed with cancer. 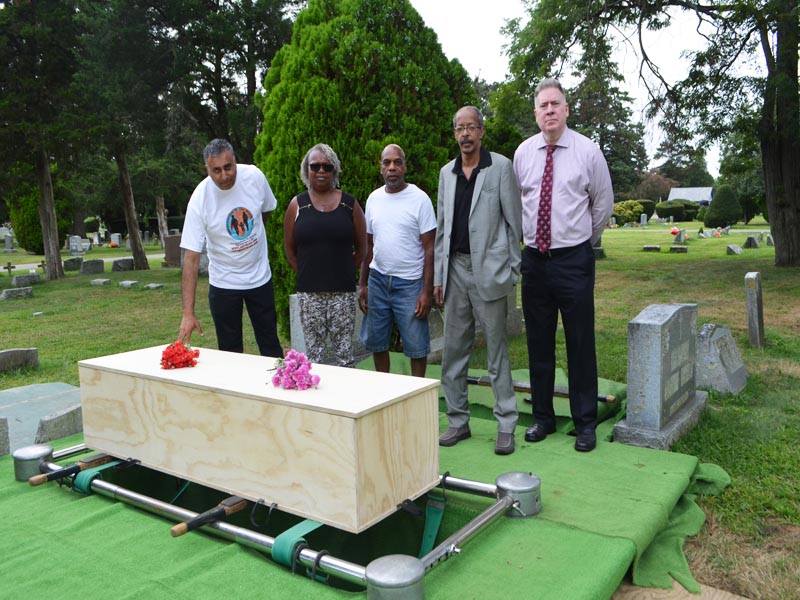 He was going in and out of hospitals, for different things. I felt that time he was a dear friend and needed my help, I called him on a regular basis, invite him to some events which he would attend, so we can catch up.

Some approximately 5 years ago, he was walking on the street on the Bronx going pass Senior citizen housing complex, and he started speaking to an lady, and he asked her how would he be able to get an apartment, she told him that she was a president of the complex and will help him with filling out the papers to apply. 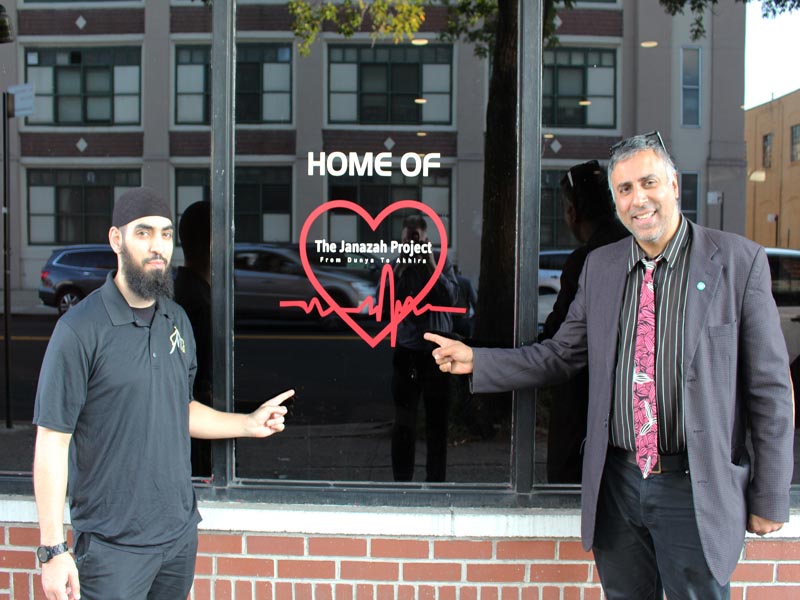 So Ed took her up on that offer went back next day ,filled out all the papers and came back next day to submit all the documents needed. Then she told him if he gets approved they will send a letter, so approximately 6 months later he got a letter letting him know that he was approved to 1 bedroom apartment, he called me very happy and excited, that he was moving in the Senior Complex in the Bronx’s.

After moving in the facility, I visited him for the first time, he took me on a tour of the facility, The apartment was one bedroom, nice floors, cooker, and many more amenities, it had a Gymnasium, Movie Room, a Sky Deck where you can go on a clear day and enjoy the great views of the Bronx. 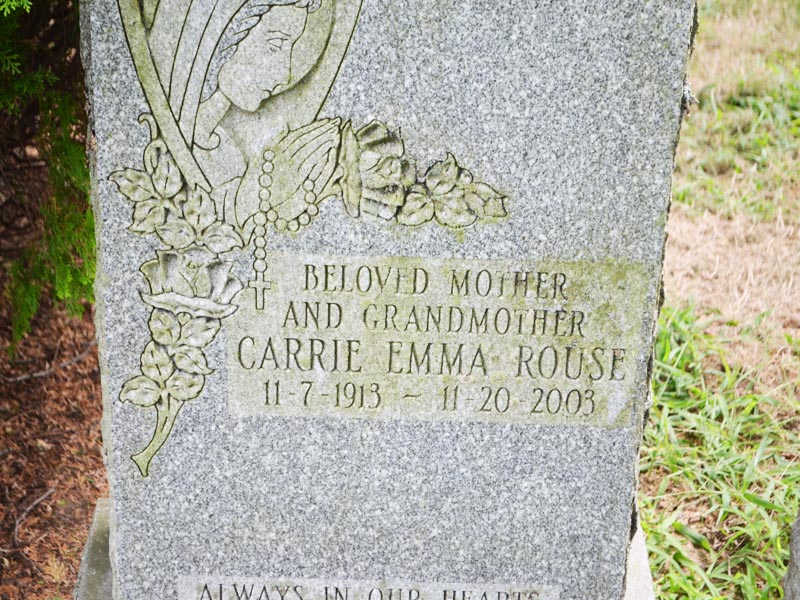 Ed Rouse Buried next to his mother Carrie Emma Rouse

I had the pleasure going to the, deck on July 4th Celebrations, we would able to eat, drink and enjoy the Macy fireworks display.

Al Caplan, who knew Ed for over 10 years and also a friend of mine, met him on many occasions, and gave him swag bags full of merchandise, which he will sell and give to many kids and people in the complex he lived in. Al also will receive 2-3 calls a day, from Ed about what event was happening and when he can pick up his next swag bag. 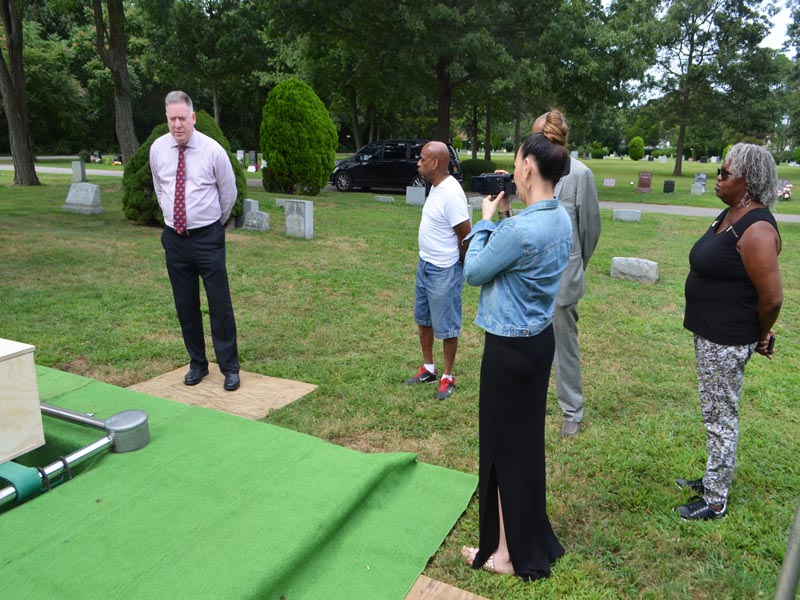 Ed had mentioned to me and Al, that we are the only family he has, and considered us both younger brothers from another mother, we felt same about him as he was a honest, honorable, sincere ,and as Al would say a 6ft 5 Inch’s 250 Pounds gentle giant.

Approximately 3 Weeks ago, Ed was going in and out of hospital, he had cancer, heart issues, and breathing problems, I visited him on few occasions, and then they bought him in for the final time, where the Doctors pronounced him, brain dead. He was moved to an hospice after that and 2 days later he passed away.

I got an call from an hospital, that he had passed away, I was told by a relative who contacted me that , his mother had a plot for him to be buried, in Long Island, Now Ed had no policy insurance of any kind, he was on Public assistance.

I was very saddened as I called Al, shared the passing of our dear friend, he told me what are going to do .So I told him since he has no family and he considered, me and you as family we have to step up to the plate, and take care of him and have him buried to next to his mother.

I called my sister and asked us if she knew anyone in the funeral business who might be able to help, she referred me to Mr Noor, Founder & President of Muslim Funeral services, I told him the situation, he told me immediately don’t you worry, we will help you all the way , with this matter. 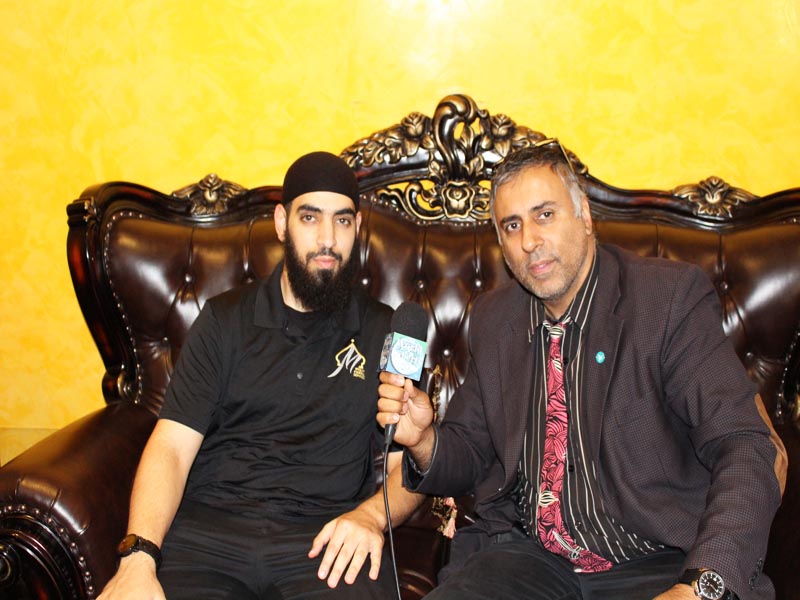 Mr Noor and his professional staff , took the Body of Ed, from the hospital , prepared it fully at their funeral home and then had the body taken to the cemetery, in a hearse .Which they did not charge a single penny for their services, we  will be ever grateful to Bro, Noor and his staff with helping us with this. Humanitarians of the World Inc , and Al Caplan Contributed for the grave  opening  expenses.

Myself Al, Liliana and a few family members out of town attended the burial ceremony, we all spoke and remembered the good times, we all enjoyed with Bro.Ed. 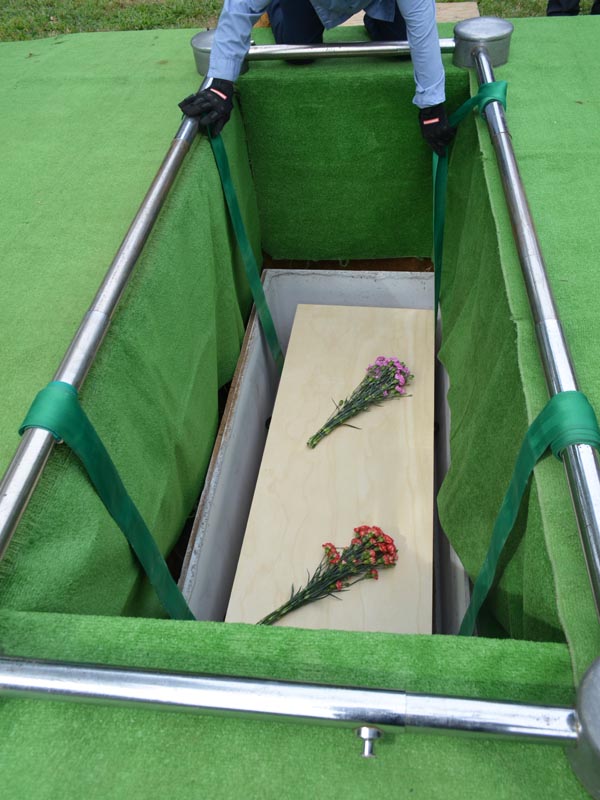 Lowering of the Casket

Ed will never be forgotten, he will always be etched in our minds, and will be remembered, when we attend and event, write an article or take a picture, May God Rest his Soul.

See more about Humanitarians of The World Inc, (HOTWINC) , by clicking here.