Pound-for-pound stars meet for the first time ahead of historic showdown on April 30 2022.

Years in the making, the biggest fight ever in women’s boxing between the pound-for-pound #1 and #2 fighters of the world is one that will not only make boxing history, but women’s sports history. MSG has hosted thousands of fights through its illustrious years, beginning more than a century ago on July 17, 1882; now, 140 years later, this matchup finally marks the very first time two female fighters are headlining a combat sports event at ‘The World’s Most Famous Arena‘. 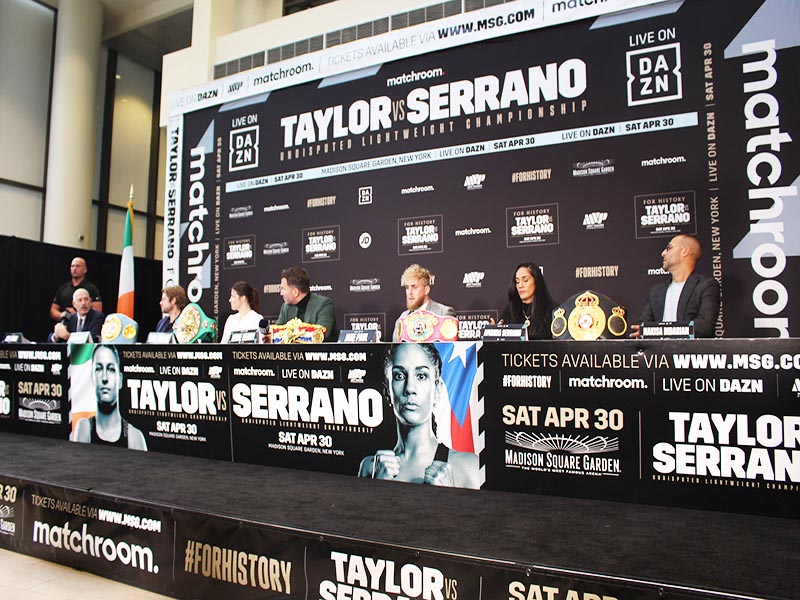 Dignitaries and Fighters at Dias

Irish icon Taylor (20-0 6 KOs) puts all the Lightweight belts on the line for the sixth time since winning them in June 2019 in a war with Delfine Persoon and seeing off the Belgian in a rematch in England before repelling the challenges of Miriam Gutierrez, Natasha Jonas, Jennifer Han and Firuza Sharipova – and there’s added spice to the fight as Taylor holds a win over Amanda’s sister Cindy in Boston back in October 2018.

Puerto Rican sensation Serrano (42-1-1 30 KOs) already has an unrivalled legacy in the sport as a seven-weight World champion. The Brooklyn based champion enters the momentous bout in sparkling form after knocking out Daniela Bermudez last March, dominating Yamileth Mercado in August and overpowering Miriam Gutierrez in two separate cards co-starring Jake Paul. Amanda was the 2021 Female Fighter of the Year for DAZN, ESPN and WBC among others. Taylor and Serrano came face-to-face at MSG today for the first time since the fight was announced, and had the following to say: 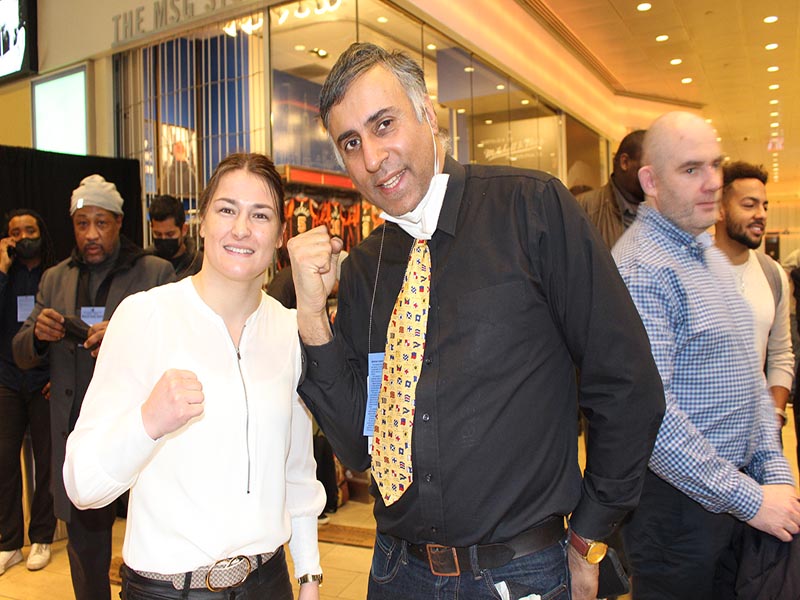 Katie Taylor – undisputed World Lightweight champion: “I’ve had my eyes on Amanda Serrano and this is a fight I’ve been looking forward to for quite some time now. “This is history right here and all of our hard work is going to be paid off for at this time.

“I think that this fight is the most exciting fight in the sport, not just female boxing. This really is the best fight in boxing right now.“We are both great champions, she has a great record and she’s a great fighter. We have seen the likes of McCaskill and others; but I want to be the best fighter.” 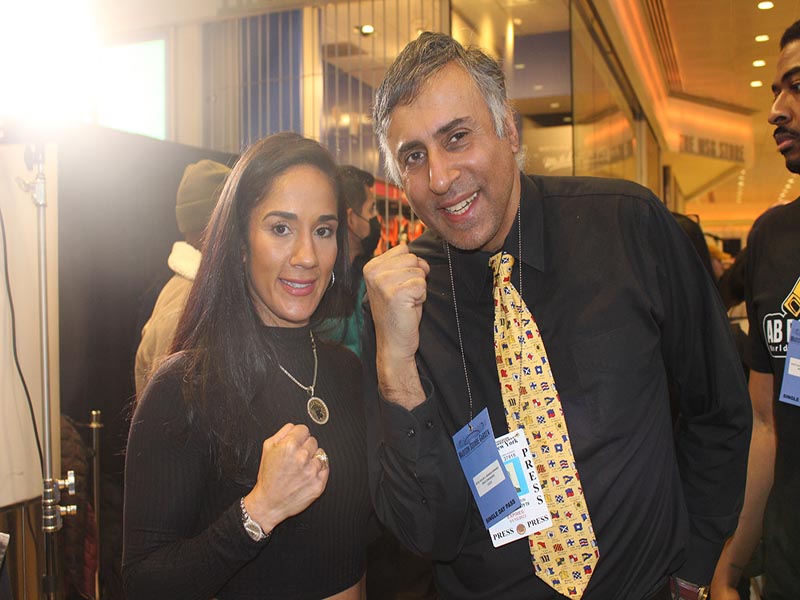 Amanda Serrano – seven-weight World champion: “No time is better than right now. Happy Women and Girls in Sports Day … Women, we are changing the sport. I am honored to share the ring with Katie Taylor. “I have to thank my coach for not accepting the first couple fights. He knew what I was worth and now we are working with MVP. “I don’t need to talk bad about any of my opponents. I do all of my talking inside the ring.“13 years, I’ve been professional and every other day I have wanted to quit… never did I imagine making the money I have today. I mean, headlining MSG, like what?” 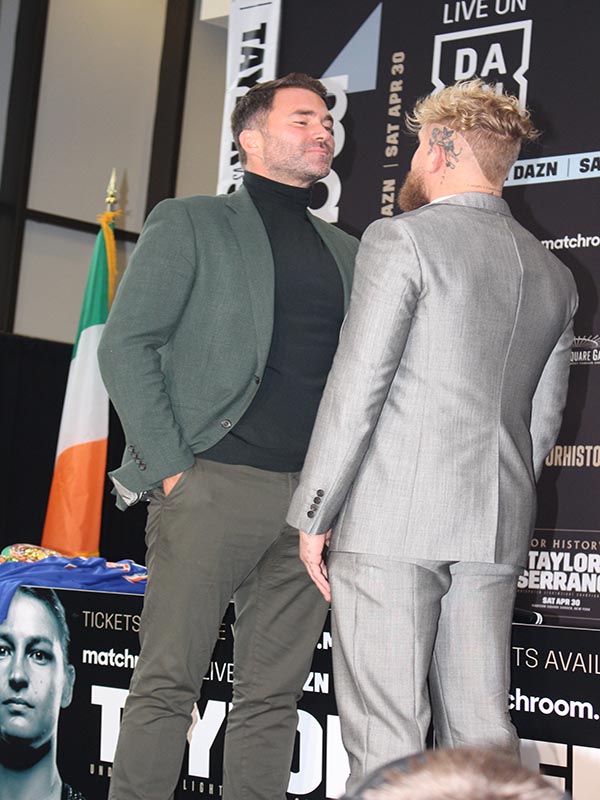 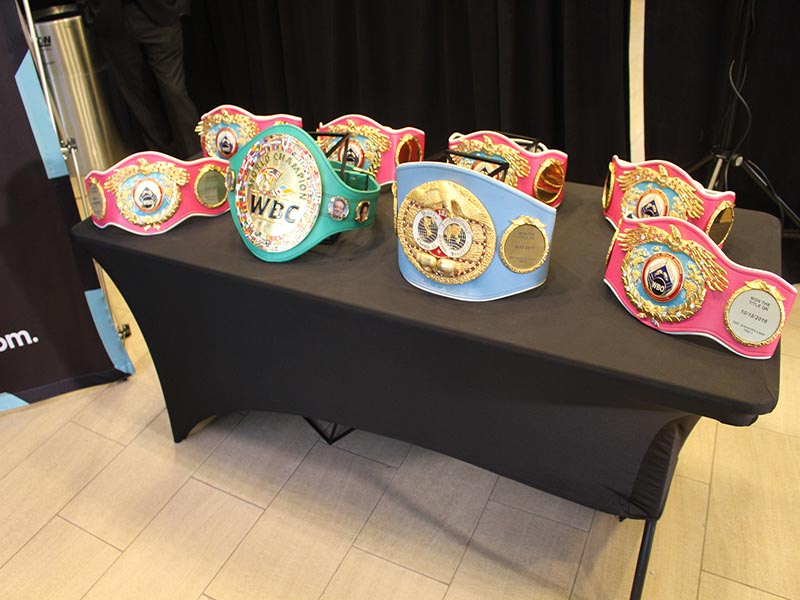 “We expect to fill up the Garden completely, an unbelievable undercard being planned for April 30 already, two-division world champion Jessie Vargas will take on Liam Smith from Liverpool. The undisputed super-middleweight world championship between Crews-Dezurn and Cederroos also on the card, as well as many more to come. “Thank you to everyone for their support, this feels like an iconic moment for the sport in boxing, a moment that a lot of us have worked very hard towards. As Jake said earlier, to those great fighters that have come before them, for now we celebrate Katie Taylor and Amanda Serrano who will make history here at Madison Square Garden on April 30.” 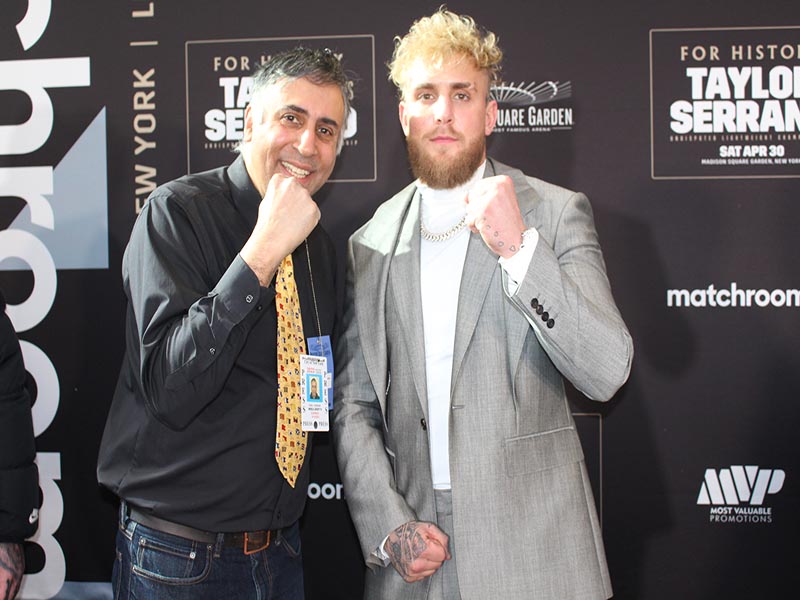 Jake Paul – co-founder of Most Valuable Promotions, professional boxer and content creator:“What an honor to be here at the historic Madison Square Garden, I want to give a big thanks to Jim Dolan and the entire MSG team for making history with us – for real. “Women have been boxing since the early 1900’s but it wasn’t until 1999 that they were able to compete professionally. 23 years later here we are with one of the biggest fights ever headlined by two women at Madison Square Garden.

“Today is about Amanda and Katie, the two best female boxers in the world right now, they deserve this stage, this historic payday and they deserve to settle who is the pound for pound best which is why I’m excited to see this fight. 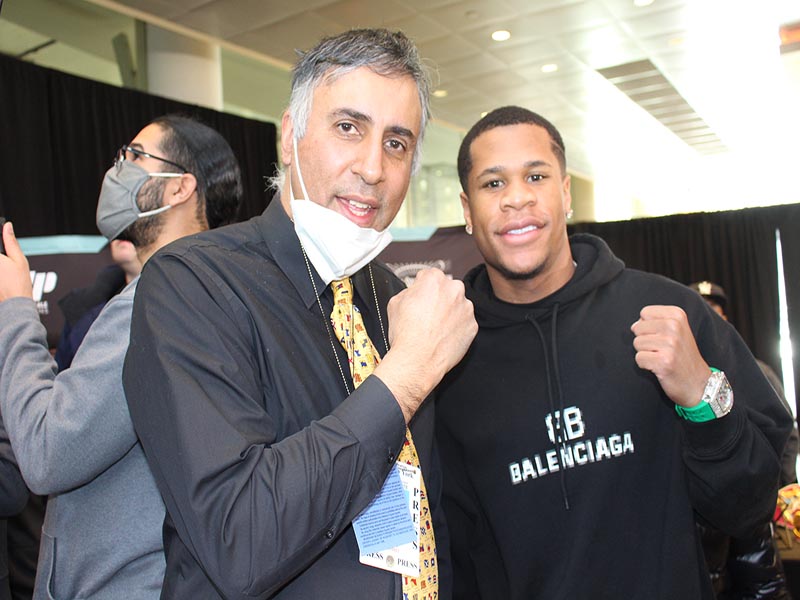 “It’s also about Anne Wolf, Christine Martin, Leila Ali, Mia St. John and so many other legendary boxers that helped lay the foundations for the ladies to be sitting here today. It’s about Clarissa Shields, Mikaela Mayer, Alycia Baumgardner and other amazing professionals currently in the sport. Most of all it’s about the future young women and girls all around the world who will see April 30 as a moment that made the impossible, possible, equality as it’s meant to be.”

“It’s an honor to be here with Eddie Hearn, Matchroom Boxing, DAZN, MSG, we’re grateful to Katie Taylor and here team to commit to taking this fight. Of course, most of all we’re proud to stand with Amanda Serrano, the superstar, a woman who has dedicated her life to boxing. Now it’s time to start showing the commitment she has made and show the world how important women’s boxing is to people like bob Arum who misspoke earlier this week. He’s going to eat his words April 30 and see how impactful this fight, I’m excited to be here and let’s make history. “I’m a fight fan, I fell in love with boxing and I’m passionate about boxing all the way around. When I met Amanda Serrano and I heard her story and how hard she’s worked, I see how hard she is trained, she’s getting paid pennies on the dollar and being taken advantage of from people in her career. She needed help and guidance, to be put on a pedestal – she’s a superstar.  I’m excited to be promotor Paul and we might be sitting next to each other a few more times in the future. I’ll always be involved in this sport and pushing to make boxing a better place.” 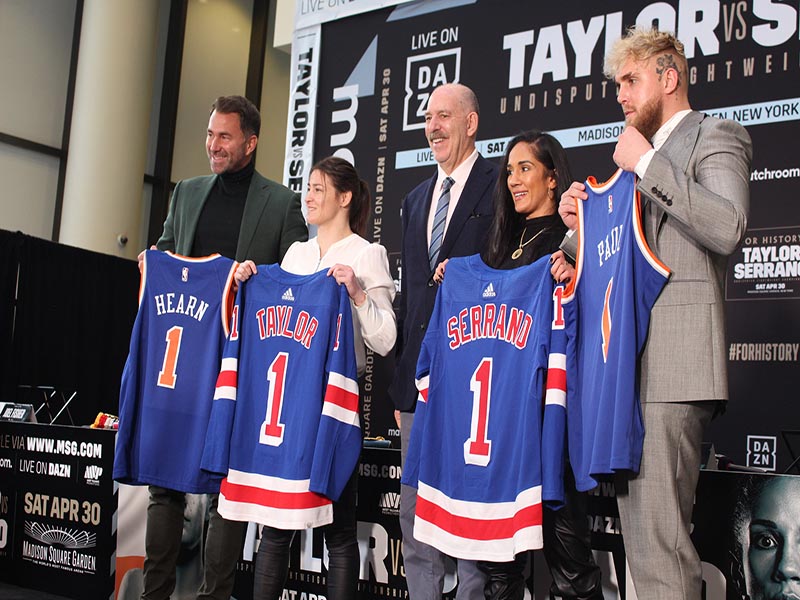 Joe Markowski – EVP, DAZN:“For us it’s an absolutely perfect event, you’ve got two top pound-for-pound women’s boxers in the world, for our UK and Irish business this is a huge opportunity and of course in the US as well. This is part of a really strong spring schedule that hopefully working with Matchroom and Golden Boy we’ll be able to add to in the coming weeks.” “A huge opportunity for us, a lot of noise gets made about this being a historic women’s boxing event, for us this just makes great business sense. It’s a huge opportunity for the sport and women’s sport more broadly to stop, acknowledge and celebrate the progress that is being made in women’s sport.” 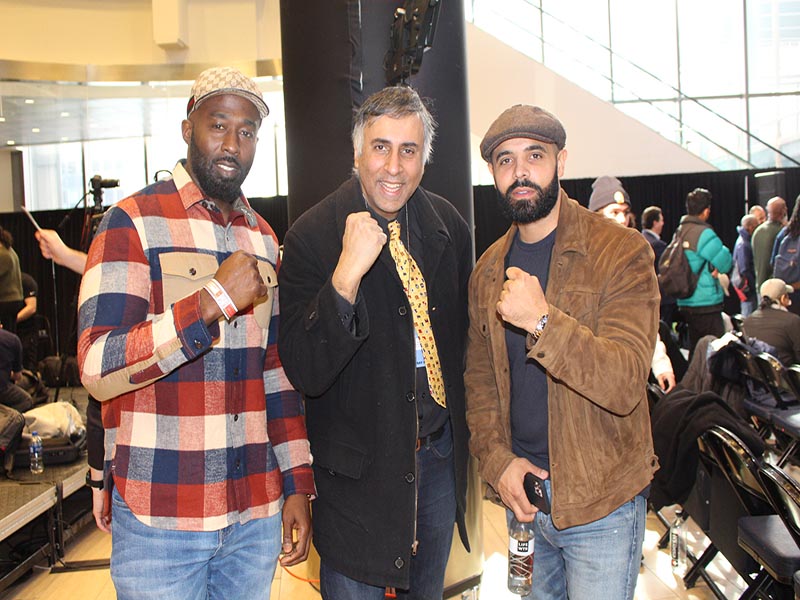 “Yourself [Eddie] and Matchroom have been long-time supporters of that, I think everything that Jake, Nakisa and MVP are doing to back this is going to bring long overdue eyeballs. We know from our broader global business outside of boxing that when the media and industries around sport gets behind women’s sport, eyeballs come, and they stay. The quality of competition is akin to men’s sport in the vast majority of cases.”

“We’re extremely excited about it, I think there’s a huge opportunity for all of us up here and the people we work with within our own businesses and our partners to use the next two months to push this to become a moment in time and a celebration – everyone at DAZN will be working towards that.” 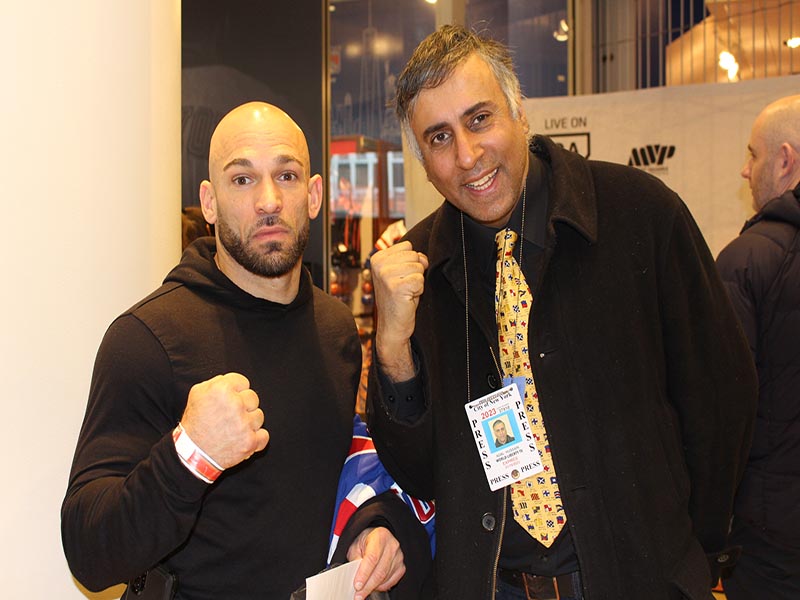 Joel Fisher – EVP, MSG Marquee Events: “The reception and reaction to the fight when it was announced was incredible, everyone’s been really supportive, so I want to thank everyone for that. There’s no better place for this fight then Madison Square Garden, to make history, this is a long overdue fight and is the Mecca of boxing. This is where all the famous fighters, the biggest fights in the world have taken place, this is history, we are talking about history.” “I’m sure that this fight between Amanda and Katie is going to really be something else, something to behold, it’s not only a great fight and history, the first time headlining the Garden, it’s just a great fight that people in boxing want to see. Forget about women just in general, this is just a great fight and it’s going to be a tremendous night.” 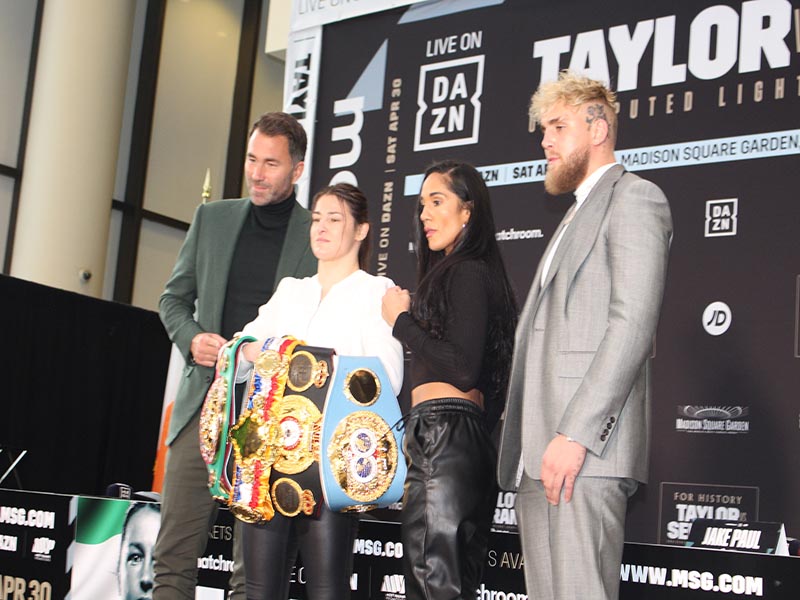 This is a Fifty, fifty fight both have a tough task ahead of their selves, and it’s hard to make a prediction. Whoever wins will become the Greatest woman fighter on the planet, and the pound for pound woman fighter also known as Greatest Woman of All Time. (GWOAT). 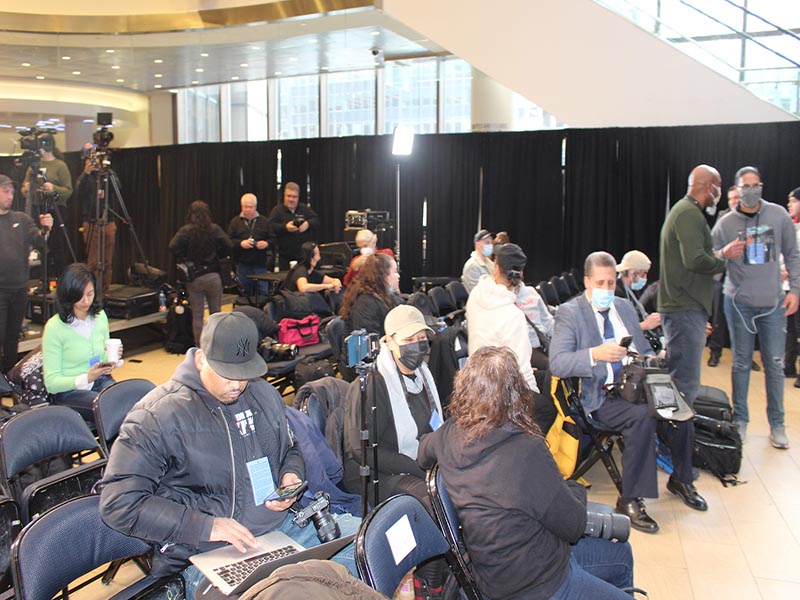