MongoDB World is back in person at New York’s Jacob Javits Center after a three-year hiatus. Day One featured a jam-packed schedule of educational sessions, live tutorials, customer stories, and product announcements for a crowd of nearly 2,700 developers and IT professionals. 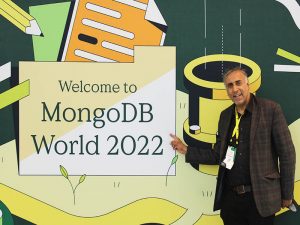 The developer-focused conference got off to an early start with breakout sessions beginning at 8 a.m. Three sessions were on tap: an introduction to data modeling with MongoDB, a primer on MongoDB Atlas Search, and a tutorial on getting started with MongoDB Atlas. In that tutorial, MongoDB solution architect Tom Gleitsmann explained how, out of all the challenges developers face on a daily basis, the common denominator is friction. 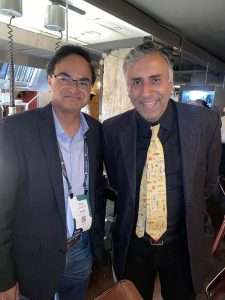 Gleitsmann gave a crisp and informative summary of MongoDB Atlas features that were engineered specifically to reduce the amount of friction developers face, including ease of deployment, security by default, data visualization, the Performance Advisor, alerts, and backup scheduling, to name a few.

The early-morning sessions were followed by a keynote delivered by MongoDB CEO Dev Ittycheria and Chief Product Officer Sahir Azam celebrating the company’s rapid growth, setting out a vision for its future, and highlighting several of its customers. 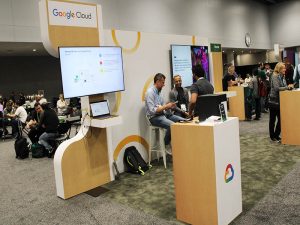 Google Cloud one of the Sponsors

The biggest reveal, though, was a new vision for MongoDB Atlas and the products that work seamlessly with it, such as Atlas Search and Atlas Data Federation. “We believe that developers want to build on a modern data model that’s designed to the way they think and the way they code,” Ittycheria said. “And we also believe that developers want an elegant developer experience that makes their lives so much easier. And they want all this in one unified platform. What they need is a developer data platform.” 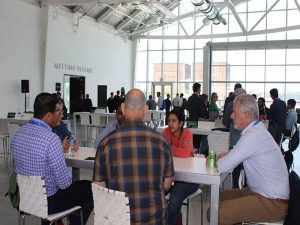 Guests having meetings at MongoDB

After the morning keynote, sessions ran back-to-back until lunch. They ranged from quick, 15-minute “chalk talks” to hour-plus deep dives. In one, MongoDB software engineer James Wang gave a hands-on tutorial on using our data visualization tool, MongoDB Atlas Charts, which is fully integrated with MongoDB Atlas. Wang showed how easy it is to link data sources in just a few clicks. Using a fictitious company, he demonstrated step-by-step how to embed data visualization via code snippets and an SDK, share the data with others using a public link, filter data inside the admin web page, and restrict access to authorized users. Attendees followed along on their own laptops and were quickly able to replicate the visualizations. 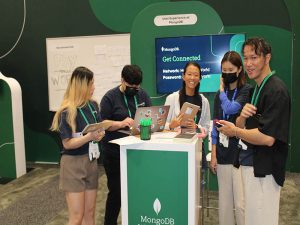 In another talk, Keller Williams’ senior architect Jim McClarty shared some of the real-world impact of Atlas — how it has accelerated the real estate firm’s ability to innovate its applications, how essential Atlas Search is in their applications, and how Charts has become “the best hidden feature in Atlas.”

Attendees shuttled from room to room like they had places to go and people to meet, which they did. MongoDB principal, industry solutions, Felix Reichenback took attendees through mobile sync and why developers often waste tons of time trying to build their own sync tool that fails to handle conflict resolution because of the intermittent nature of mobile connections. 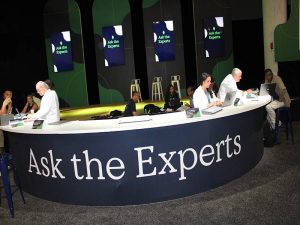 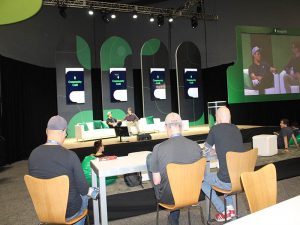 Porter gave personal anecdotes illustrating many of the hurdles developers have to overcome that have nothing to do with building software, such as rigid and fragile relational databases, and working with SQL, a language that developers early in their careers or fresh out of school have no desire to work with. Porter’s keynote address included a live demo of the Relational Migrator, which, while risky to perform in front of an audience, went off flawlessly.

Meanwhile, a series of events kept the IDEA Lounge a lively place, including a great panel discussion called Our Journey: Being Black in Tech. And a floor below the workshops, more than a dozen MongoDB partners demonstrated their platforms and related products — including many of the companies named MongoDB Partners of the Year. 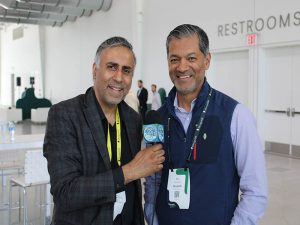 The schedule for Day 2 is equally packed, with more than 80 sessions that include partner showcases, strange cases from the field, book club sessions, more deep dives into product announcements and tutorials, and talks on diversity, equity, and inclusion. In the afternoon, MongoDB celebrates Pride with food, drinks, and entertainment at the historic Stonewall Inn. And MongoDB World 2022’s biggest event happens at the end of the day — “The Party,” featuring music from The Midnight and Don Diablo, as well as retro arcade games and an open bar. 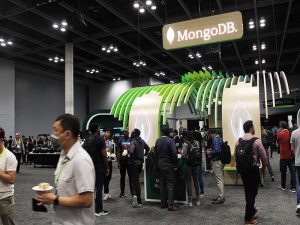 Thousands of people in attendance

We had the pleasure of interviewing Mr Dev Ittycheria, President & CEO of MongoDB: Dev Ittycheria has over two decades of experience as an entrepreneur, investor, and leader specializing in high-growth software companies. Currently, he is the President & CEO of MongoDB, where he led its IPO in 2017—the first public offering of a database company in over 26 years. Under Dev’s leadership, MongoDB has released innovative products such as Atlas, its global cloud database, acquired thousands of customers, rapidly expanded operations around the world, grown its business faster and delivered better financial performance than any comparable company in its sector. Dev currently serves as lead independent director of the board of directors of Datadog, Inc., a public software company. Dev also serves on the board of directors of DataRobot, a private software company. Previously, Dev was Managing Director at OpenView Venture Partners, Venture Partner at Greylock Partners, and CEO/Co-founder of BladeLogic, which was acquired by BMC for $900 million. Following the acquisition, he served as President of BMC. Dev founded his first technology company in 1998, and his leadership and board roles have resulted in 5 IPOs and 2 significant acquisitions. Dev graduated from Rutgers University with a B.S. in Electrical Engineering, was honored with the Medal of Excellence and was recognized by the School of Engineering as its 2010 Alumnus of the Year.