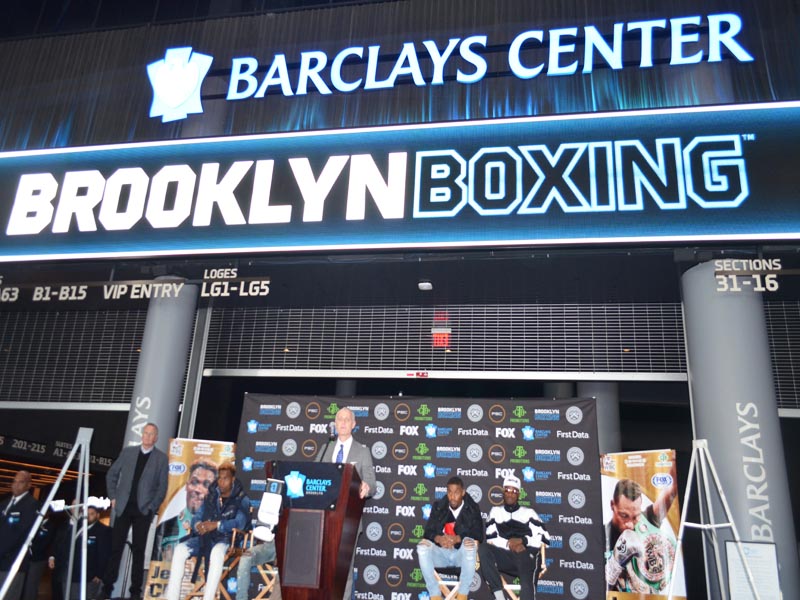 Twin brothers and world champions Jermall Charlo and Jermell Charlo will kick off the new season of Premier Boxing Champions on FOX and FOX Deportes live in primetime on Saturday, December 22 at Barclays Center, the home of BROOKLYN BOXING™. The Charlos are two of the hottest young rising stars in boxing today and they made history in 2016 when they became the first twin boxers to ever hold titles simultaneously in the same weight class.

Jermall Charlo will defend his WBC interim middleweight title against top-rated contender Willie Monroe, Jr., while Jermell Charlo makes the fourth defense of his WBC super welterweight championship against hard-hitting former title challenger Tony Harrison. Jermall’s fight will serve as the main event of the show after he won the coin toss at today’s press conference to determine which Charlo twin will close the show. 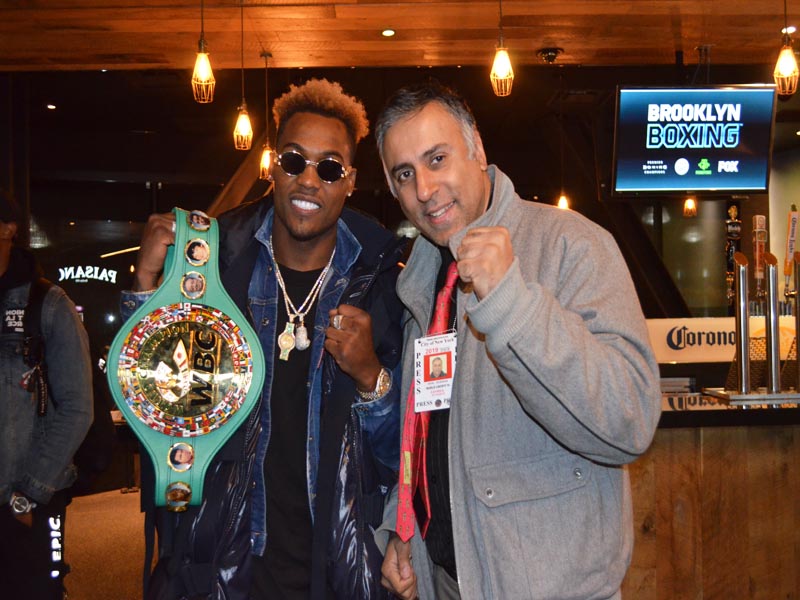 The exciting night of action will also see WBC mandatory challenger and 2012 U.S. Olympian Dominic “Trouble” Breazeale battle Carlos Negron, a member of the Puerto Rican boxing team at the 2008 Bejing Olympics, in a 10-round heavyweight attraction that opens the FOX and FOX Deportes broadcast at 8 p.m. ET/5 p.m. PT.

“The Charlo twins at the top of a boxing card always brings excitement and entertainment,” said Tom Brown, President of TGB Promotions. “In recent memory there haven’t been any twin world champion boxers to have the ring presence of the Charlos. Jermall will be tested by the slick southpaw skills of Willie Monroe, Jr. and Jermell will face a tough challenge from Tony Harrison, who also has his eye on winning a world championship. Heavyweight Dominic Breazeale is a throw-back battler who is never out of any fight, but he’ll have his hands full against Carlos Negron, who has an Olympic pedigree. It’s going to be a special night for those at Barclays Center and those tuning into the primetime broadcast on FOX and FOX Deportes.” 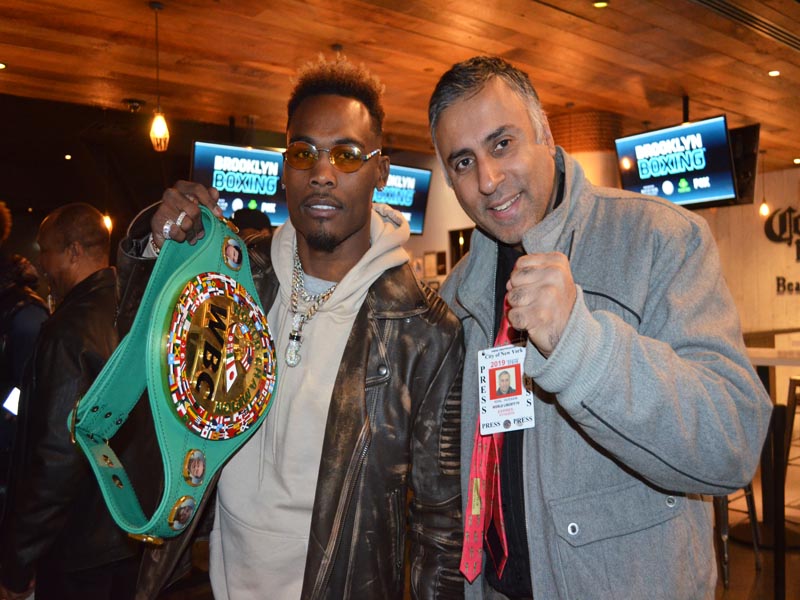 “FOX Sports is excited to be kicking off this new deal with the PBC on Saturday, December 22 with these exceptional fights,” said Mark Silverman, President, National Networks, FOX Sports. “Over the next four years, we’re looking forward to highlighting the PBC’s stellar lineup of boxers and telling their amazing stories.”

“It’s fitting for Barclays Center to close out its strong year of BROOKLYN BOXING programming with a major fight night televised in primetime on FOX,” said Brett Yormark, CEO of BSE Global. “As a twin myself, I understand how special it is to achieve career milestones alongside your brother, and I am looking forward to seeing Jermell and Jermall bring their unique brand of excitement to boxing fans in Brooklyn. With the inclusion of a top heavyweight bout in Breazeale vs. Negron, the card will deliver on the BROOKLYN BOXING guarantee of competitive matchups, featuring 50/50 fights and the sport’s best personalities.”This will be the third fight for each Charlo twin at Barclays Center, as they enter December 22 a combined 4-0 with four knockouts at the venue.

The 28-year-old Jermall Charlo (27-0, 21 KOs) is one-minute older than his identical twin brother and won his first world title a year earlier than Jermell when he scored a devastating third round knockout of Cornelius Bundrage to win the IBF 154-pound title in 2015. Born in Richmond, Texas and growing up in Houston with Jermell, Jermall still trains in Houston with renowned coach Ronnie Shields. He successfully defended his 154-pound title three times, including a devastating knockout of top contender Julian Williams, before moving up in weight to campaign at middleweight.

Jermall proved to be just as dominant at 160 pounds as he was at 154 pounds when he made his middleweight debut by stopping Jorge Sebastian Heiland in the fourth round of their July 2017 bout. Jermall became the interim WBC middleweight champion with a second round knockout victory over Hugo Centeno, Jr. in his last fight on March 3.

“I’m very excited and the fire is lit to be back in Brooklyn,” said Jermall Charlo. “It’s great to be headlining a big show with my twin brother in Brooklyn. It’s going to be an exciting night of boxing. Willie Monroe is one of those fighters that will get me to the level I need to for all those great fights.  And believe me, we’ll get them. This is a fight that he’s been asking for and it makes it special to know he’s keying in on me. Everybody knows what I come for. I’m going to knock him out. I’m going to be as explosive as I can and close the show. The journey begins now in Brooklyn.” 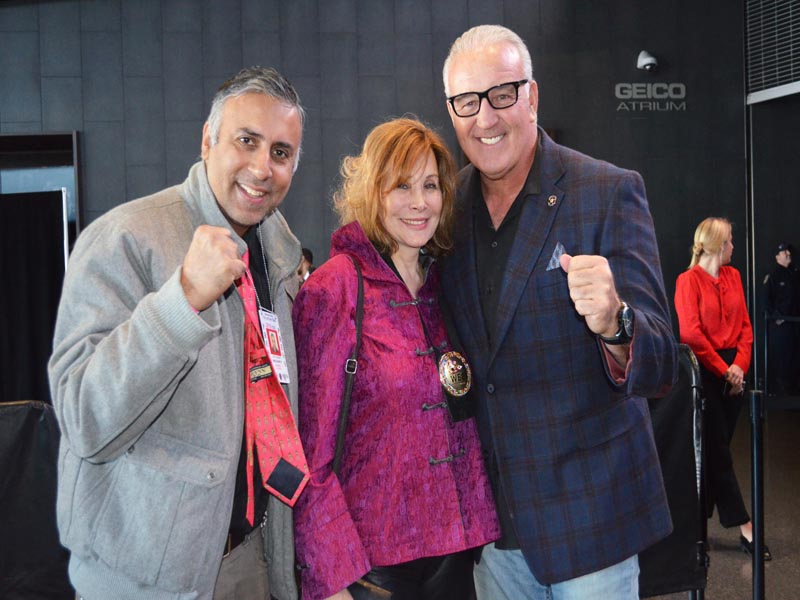 The 31-year-old Willie Monroe, Jr. (23-3. 6 KOs) has shown the skills to compete at the elite level, but the slick southpaw will face a tough challenge when he goes up against the hard-hitting Charlo. Fighting out of Rochester, N.Y., Monroe will be fighting for the second time in his career at Barclays Center after he scored a unanimous decision over Carlos Galvan on March 3. He followed that up by beating Javier Francisco Maciel by unanimous decision on Aug. 24 and has faced top middleweights Gennady Golovkin and Billy Joe Saunders throughout his career.

“I’ve been in this position before and it won’t faze me on December 22,” said Monroe. “This is my third shot at a title, I’m the third Willie Monroe from my family in the line, and having already fought twice for the title, I know that the third time is going to be the charm. There’s a job to be done and nothing about it will be easy. Jermall Charlo is right up there with my past opponents Gennady Golovkin and Billy Joe Saunders, so it’s another tough outing. But it’s definitely a challenge that I’m up for and a challenge that I think I can conquer.” 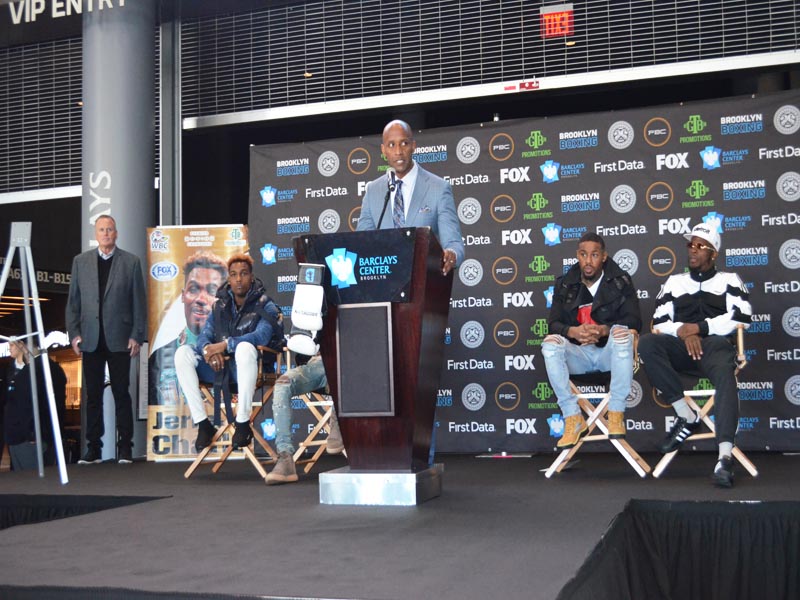 Jermell Charlo (31-0, 15 KOs) joined his brother as a 154-pound world champion when he scored an eighth-round knockout over John Jackson in 2016 on the same night his brother defended his own 154-pound title. The 28-year-old had previously had previously picked up wins over Vanes Martirosyan, Joachim Alcine and Gabriel Rosado before securing the world title opportunity. The world title fight against Jackson was also Jermell’s first fight training in Dallas with Derrick James, where he will be training for this fight. 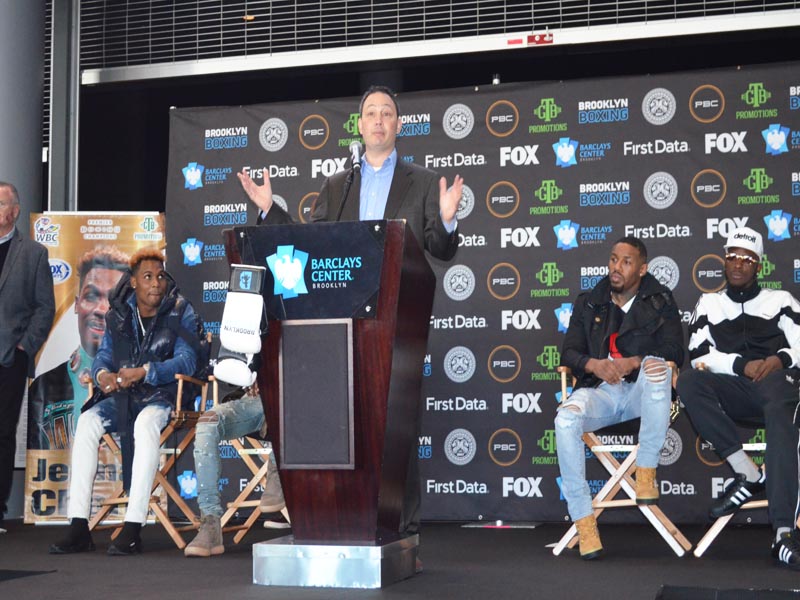 Since earning the title, Jermell has successfully defended three times, He delivered sensational highlights-reel knockouts of Charles Hatley and Erickson Lubin in 2017 before putting Austin Trout on the canvas three times in June on his way to a decision victory. This fight represents Charlo’s opportunity to tighten his grip on the 154-pound division.

“This is a super fight for me, bigger than any fight, because I get to be on a big show with my brother and we get to showcase our talents together,” said Jermell Charlo. “On December 22, there’s nothing on after us. After we fight the fans go home and we’ll have put on a great show. I’m working with my trainer Derrick James and we’re getting ready to be built up and not just for Tony Harrison. We’re trying to unify. We’re coming for everybody in the division. I’m super stoked to be with my brother and opening this first show on the new deal between PBC and FOX.”

The 28-year-old Harrison (27-2, 21 KOs) is a top contender in the 154-pound division who looks to make the most of his second shot a world title. Fighting out of Detroit, Harrison has strung together three straight victories since losing to unified 154-pound champion Jarrett Hurd in 2017 on FOX. Harrison’s most recent performance saw him pick up a decision victory over former world champion Ishe Smith in Smith’s hometown of Las Vegas. Harrison owns knockout victories over Sergei Rabchenko and Fernando Guerrero and hopes to emerge with a world title in his toughest test since facing Hurd. 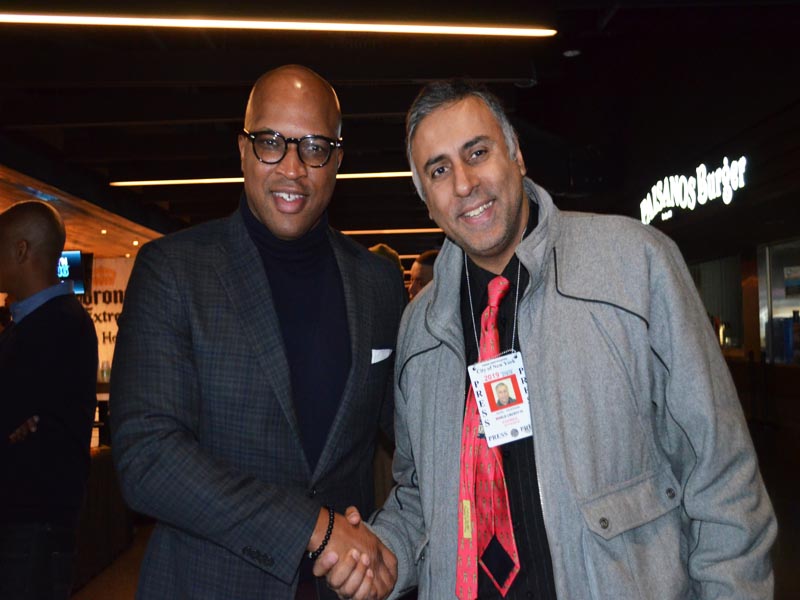 “Based on my last performance against Ishe Smith, I feel like I’ve earned this opportunity,” said Harrison. “Jermell Charlo is a terrific fighter. I like his attitude toward the sport and his skills in the ring, and I expect to face him at his best. But that just gets my competitive juices flowing. It’s going to be skill-for-skill, and there will be a lot of back-and-forth rounds from round one on. It’s going come down to who is best at sticking to their game plan. It’s hard to get opportunities in this division so I’m going to go in there and leave it in the ring and make it an exciting fight.” 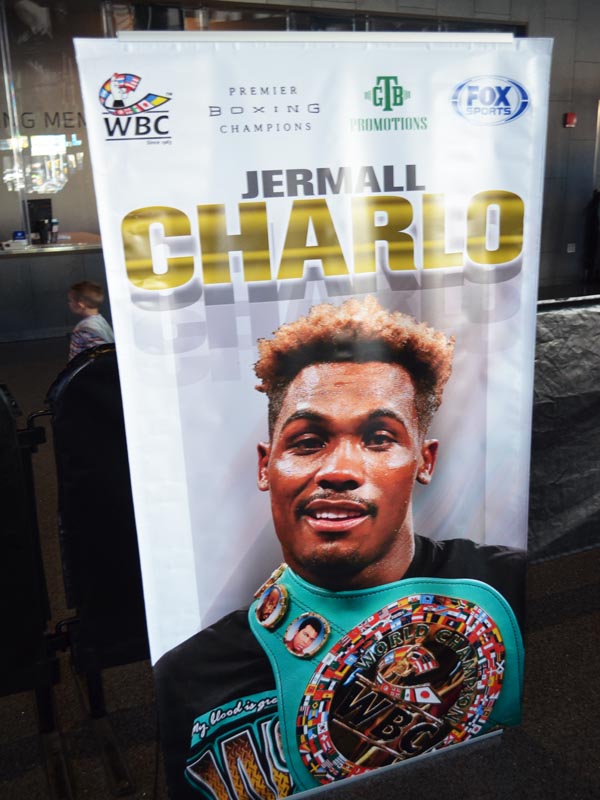 A member of the 2012 U.S. Olympic team at the London games, Breazeale (19-1, 17 KOs) has fought his way into the mandatory contender’s slot in the WBC rankings with impressive knockout victories in his last two fights. After losing a heavyweight title fight against Anthony Joshua in 2016, the 33-year-old knocked out then unbeaten Izu Ugonoh in a February 2017 war before stopping former title challenger Eric Molina in November that year. The Glendale, California-native also owns victories over Amir Mansour, Fred Kassi and Yasmany Consuegra. 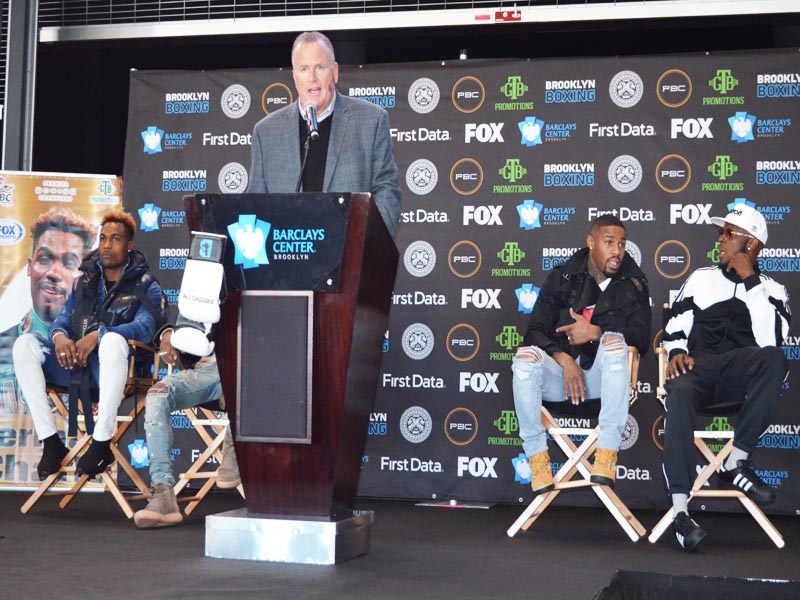 “This will my first time back at the Barclays Center in the 13 months since I beat Eric Molina and I’m excited to show the fans that I’m here to stay,” said Breazeale. “Carlos Negron is a big guy and a fellow Olympian. I want to show that I don’t have any ring rust. I’ve been out of the ring, but I’ve lived in the gym and I can box, press the pedal to the metal and get the knockout when the opportunity arises.”

Fighting out of San Juan, Puerto Rico, Negron (20-1, 16 KOs) won his first 13 pro fights after turning pro in 2009 following his stint at the 2008 Olympic games. The 30-year-old has won seven straight fights by knockout including a December 2016 stoppage of then unbeaten Cristian Galvez and a dominant performance in June 2017 where he dropped Derric Rossy twice on his way to the TKO victory. 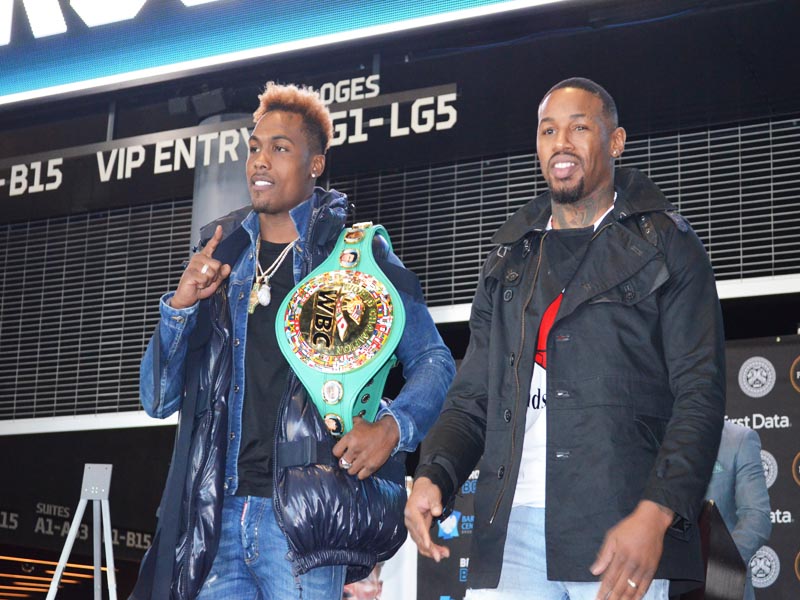 “I’m thankful to have this opportunity and for my team that always been there for me,” said Negron. “Anyone who knows this sport knows how hard a task it is and I’m working hard every day to win this fight. When I was offered Breazeale I said yes right away. I want to be the first born and raised Puerto Rican heavyweight champion and on December 22 I will fight with honor, heart and pride. I’m going to announce a new heavyweight in the mix.” 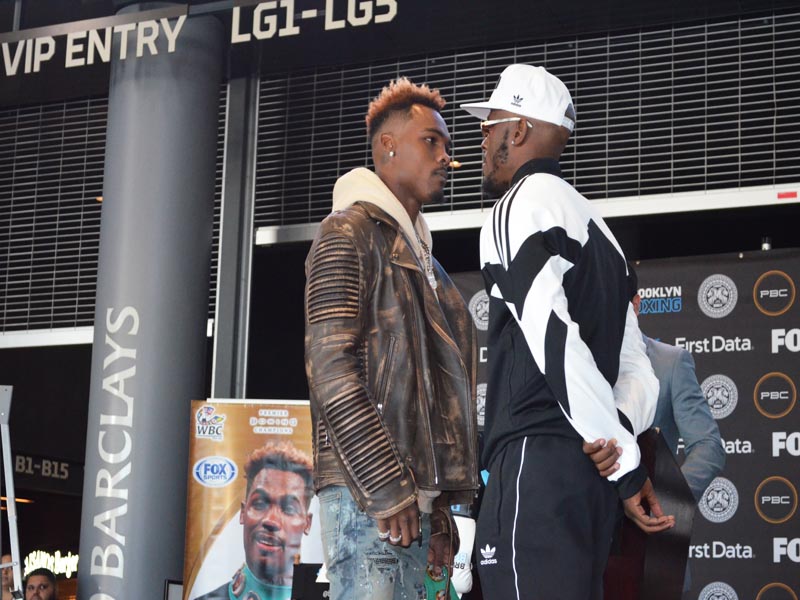 This should be a great boxing match , both of the Charlo Twins are brutal KO Artists, it will be a great way to end 2018 , with a fight at this magnitude. See  More about boxing in our World Liberty TV Boxing Channel and Blogs by clicking here.