Like so many New Yorkers, Brooklyn Borough President Eric Adams grew up with adversity—and overcame it. 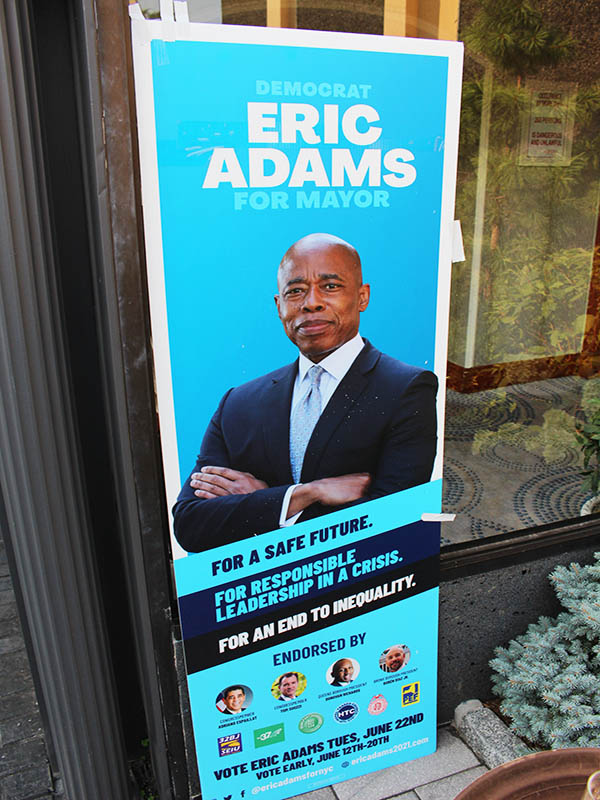 Eric Adams next Mayor of NYC

As one of six children, born in Brownsville and raised in South Jamaica by a single mom who cleaned houses, Eric and his family did not always know if they would come home to an eviction notice on the front door or food on the table. And when he was beaten by police in the basement of a precinct house at 15, Eric faced a life-changing act of injustice. 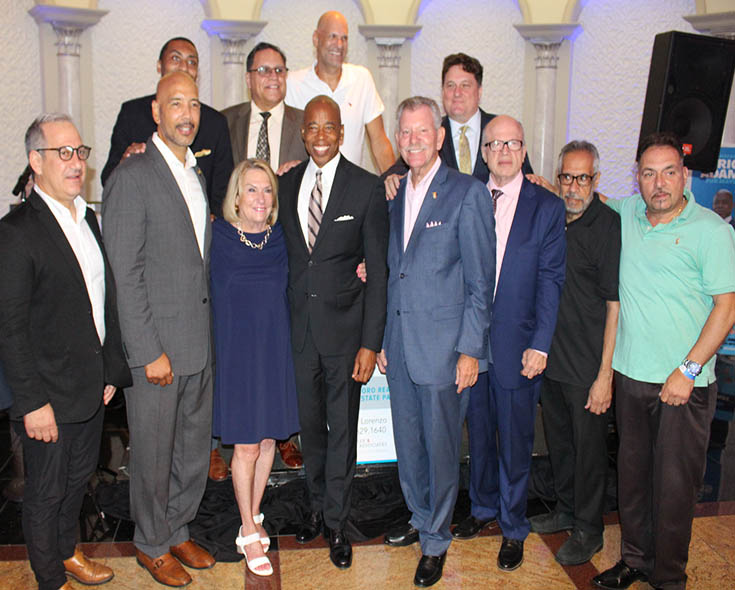 But instead of giving into anger, Eric turned his pain into purpose and decided to change the police department from within. He joined the NYPD and became one of its most outspoken officers, calling out racism and bias in the department and pushing for major reforms. 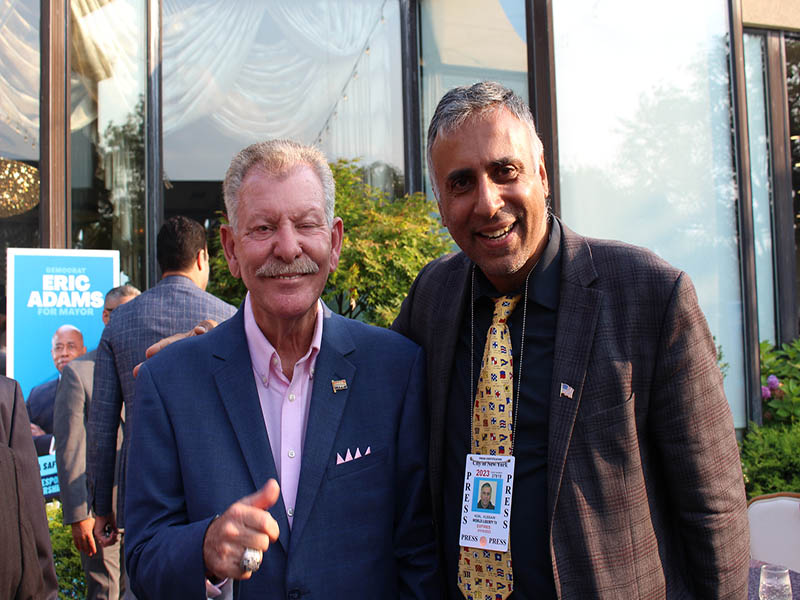 As a founder of 100 Blacks in Law Enforcement Who Care, Eric would often police the streets in a bulletproof vest one day during the high-crime 1980’s and 1990’s and protest bad behavior by cops the next, marching side-by-side with his fellow civil rights advocates. He rose to the rank of captain, helping to build the first computerized system for tracking crime in the city, which led to historic gains in public safety. 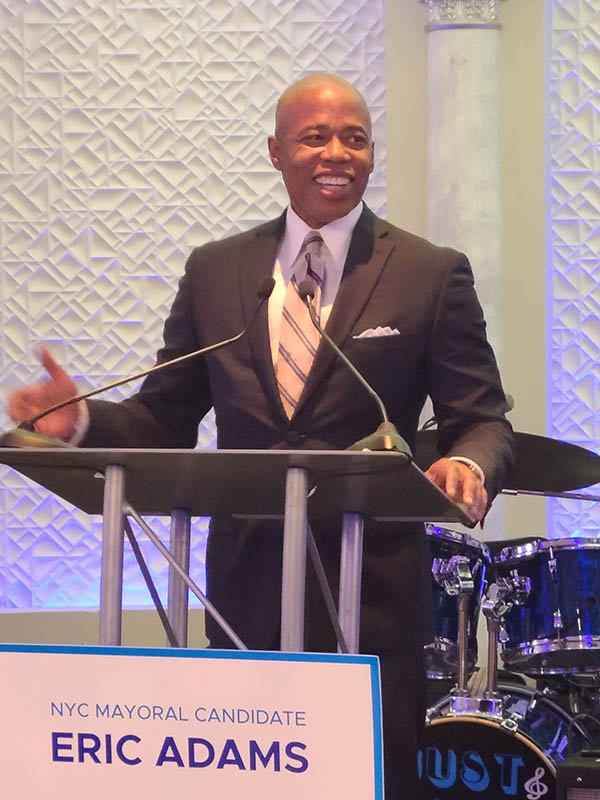 Eric’s efforts to change policing began his lifelong work to improve and protect New York. From the NYPD, he moved on to the State Senate, where he represented sections of central and Brownstone Brooklyn. In Albany, Eric built winning coalitions to advance New York City’s values and goals, helping to push through measures to protect tenants and workers, combat gun violence, end the NYPD’s abuses of stop and frisk, and advance human rights — including marriage equality. He also became the first person of color to chair the Senate’s Homeland Security Committee. 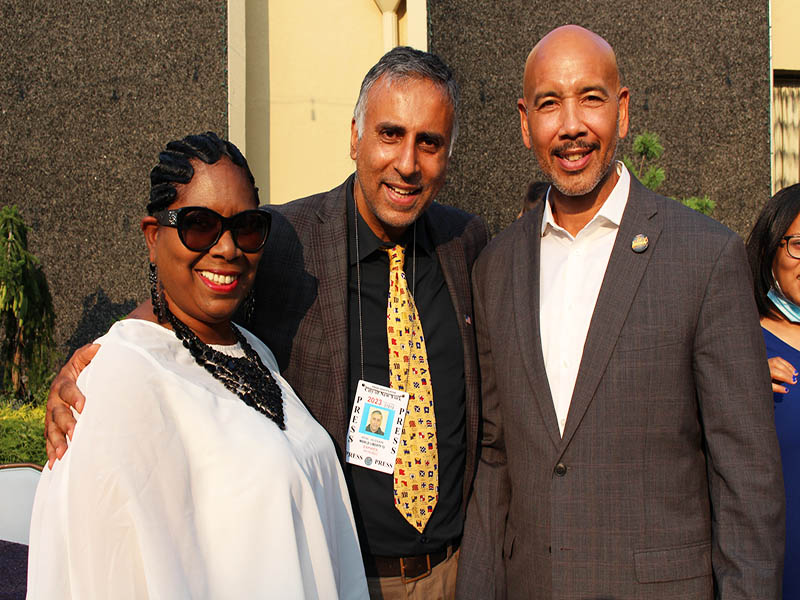 Eric was then elected Brooklyn Borough President in 2013 by putting together a diverse coalition of Brooklynites to become the borough’s first Black leader. As the representative of one of the nation’s largest counties, Eric fought tirelessly to grow the local economy, invest in schools, reduce inequality, improve public safety, and advocate for smart policies and better government that delivers for all New Yorkers. When the COVID-19 pandemic struck the city, Eric moved a mattress into his office and worked around the clock to deliver donated meals and PPE to essential workers and vulnerable New Yorkers, demanding government produce more equitable relief. 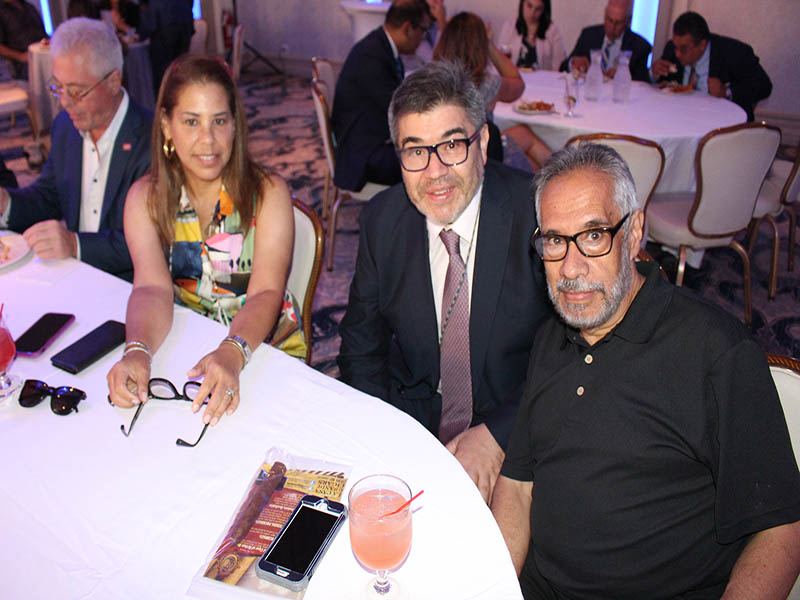 In addition to continuing to fight for struggling New Yorkers and a better quality of life for all, Eric became a national leader on public health policy after learning he had developed Type 2 diabetes. Following his diagnosis, Eric completely changed his diet and his body, reversing the disease and launching a personal mission to educate New Yorkers about preventative care and wellness. His work has already led to successful proactive public health efforts across the city and increased education in schools and with high-risk populations in lower-income areas, partnering with civic organizations and health experts. 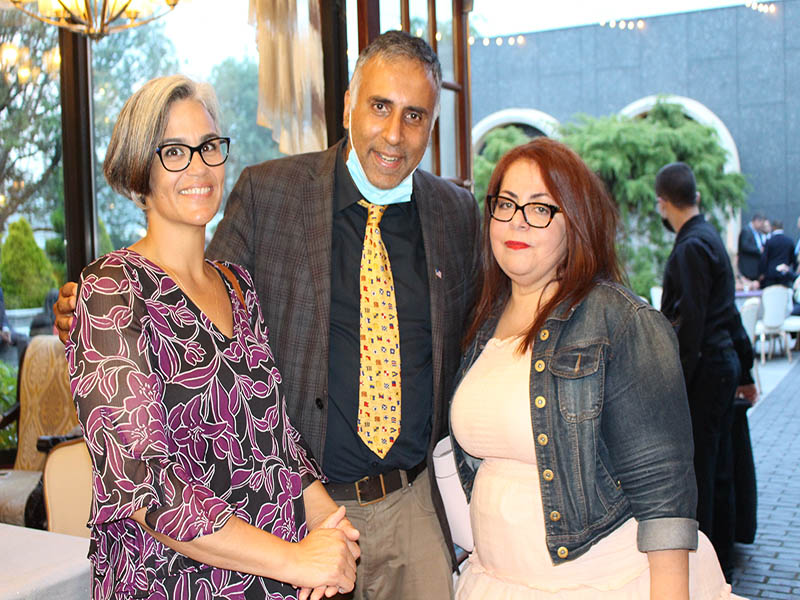 Eric is a lifelong New Yorker. He received his master’s degree in public administration from Marist College, and is a graduate of New York City Technical College and the John Jay College of Criminal Justice. He is also a proud product of New York City public schools, including Bayside High School in Queens. Today he lives in Bedford-Stuyvesant, where he has resided for over 20 years. 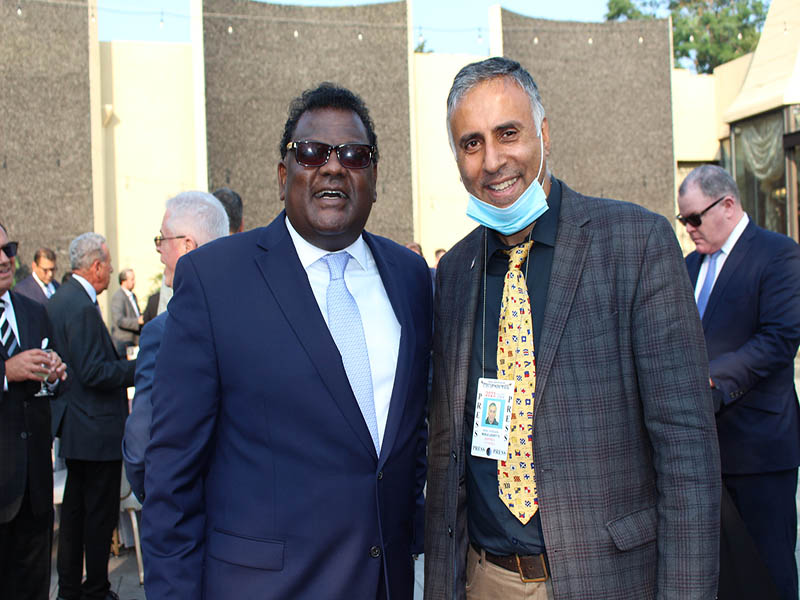 All New Yorkers need to know, including Latinos in Spanish, that Eric Adams is a progressive Democrat who believes that New York’s comeback starts with making sure every kid has a fair shot at a safe and secure future.  Eric’s plan – investing in early childhood education, improving our public schools — and safe, affordable housing.  And it also means getting illegal guns off of our streets and tackling violent crime — head on. 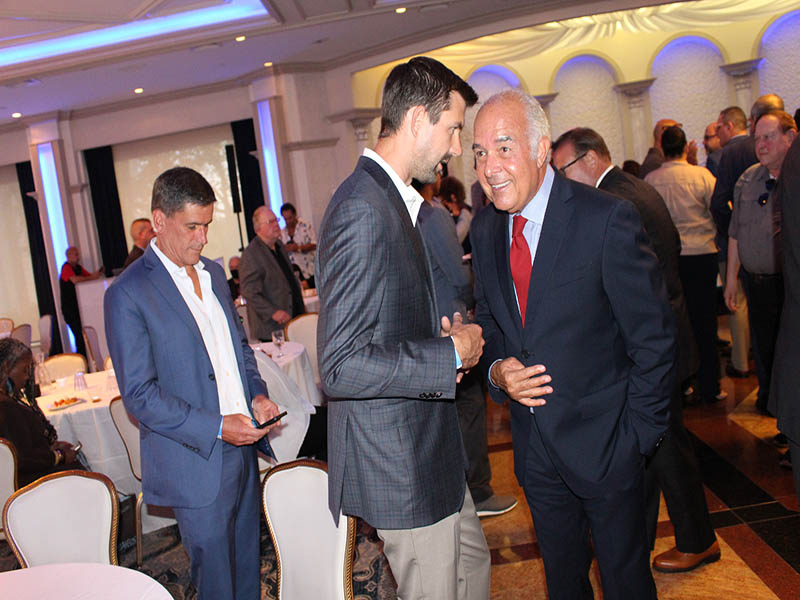 22 years: As a New York City Police Officer for 22-years, Eric honorably served the city and often risked his life for those he made an oath to protect.

4 terms: Eric served 4-terms as a New York State Senator fighting for the rights of his community and for people often left out of the political conversation.

7 years: The first African-American Borough President of Brooklyn, Eric served for 7-years positively impacting the lives of over 2.6 Million people. 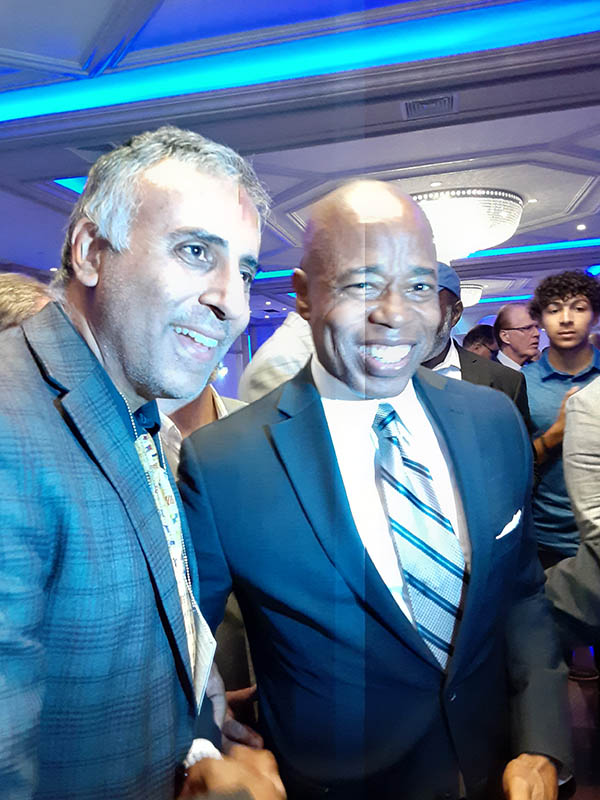 Dr.Abbey with Eric Adams The Next Mayor of New York City

This Is Our Challenge New York, I believe that Change Is Coming, and this is our moment to step onto this stage and be fully prepared for the journey ahead. I ask you to fight with me, for your future and your children’s future. I stand with you, I stand for you, and together we’ll fulfill the promise of New York City. I Am YOU!!

On Tuesday July 27th 2021, a huge fundraiser was organized by Mr. Lenny Caro, also known as Mr. Bronx and his committee members which included, Ruben Diaz Jr, Bronx Borough President, Attorney Alfred Placeres, Kathy Zamenchansky , Adolfo Carrion and many more who is who of the Bronx who attended the fundraiser for Eric Adams, who will be challenged  by Curtis Sliwa, Republican candidate. 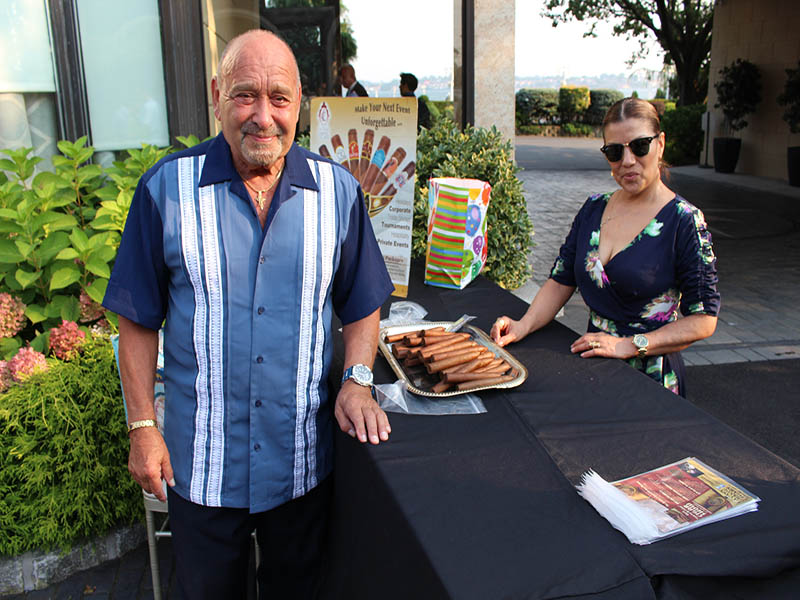 Close to 200 people were in attendance to show support, Eric Adams was introduced by Ruben Diaz, Jr. Bronx Borough, Eric Adams delivered a keynote speech outlining his vision for New York city and uniting every one , and thanking Bronx for their support of him and he went on to say, I will not forget what the Bronx’s has done for me when I get elected as the Mayor of New York city. 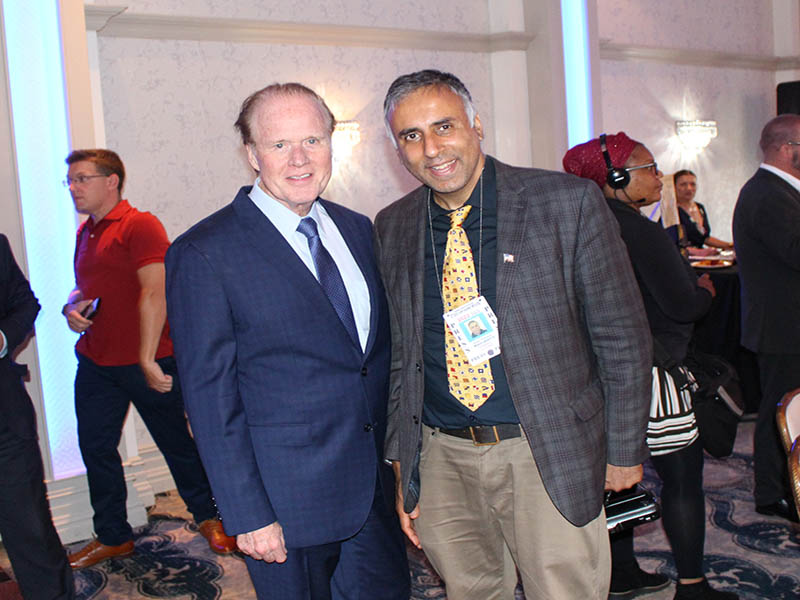 Dr.Abbey with Joseph Kelleher Chairman of Bronx Chamber of Commerce

We at World Liberty TV, like to thank Lenny Caro, AKA Mr. Bronx for his friendship for over 20 years, and his invite to this event and also thank Alfred Placeres who served on the Eric Adams, NYC Mayoral Committee for the Bronx fundraiser.