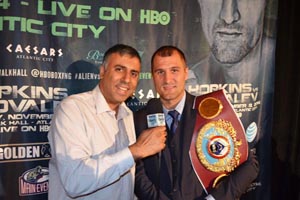 Kovalev and Ward are currently ranked the number two and number four pound-for-pound boxers in the world, respectively, by The Ring Magazine, making their hotly anticipated fight only the third bout in the history of The Ring Magazine pound-for-pound list to pit two undefeated top-five ranked pound-for-pound fighters against each other. Odds makers and pundits have this fight evenly matched at 50-50 and it is poised to be a sure-fire 2016 Fight of the Year candidate. History will be made on Nov. 19th! 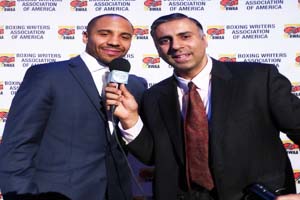 Making the fight even more intriguing, Kovalev and Ward are polar opposites. The Russian Wrecking Ball Sergey “Krusher” Kovalev is an unbeaten knockout artist sitting atop boxing’s light heavyweight division. With his ferocity in the ring and his charisma outside of it, Krusher is on his way to becoming the sport’s next big star. The last American man to win an Olympic Gold Medal in boxing, Andre “S.O.G.” Ward is already a future Hall of Famer. Known for his strong character and integrity outside the ring and his warrior’s instinct inside it, Ward has not lost a fight, amateur or professional, since he was 12-years-old. Kovalev’s seemingly unstoppable offense-first approach stands in stark contrast to Ward’s slick, defensive style that has been an unsolvable riddle for every foe he’s taken on. 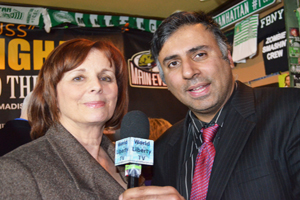 Neither man has faced an opponent like this before. Who will be the next “Pound for Pound” king? Find out Saturday, Nov. 19!

Live on HBO tonight, when asked about whether or not Ward is ready to face him Kovalev said, “I think he is ready. I am ready too. The fight against Chilemba was similar to how it is going to be against Andre Ward. He is a really great champion and he proved this today. I just want to say, let’s do it November 19 on HBO.” 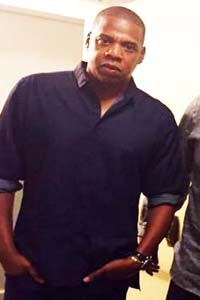 Ward responded, “I am excited, man. I am looking forward to it. I want to be the light heavyweight champion of the world. I got past this step. He got past his step. We will see you in November. I have been doing this for 22 years and if I am not ready to fight the best now then I will never be ready. I have been preparing for these moments since I been a kid. You got to respect Sergey for the way he has gotten to where he has gotten. He didn’t have any soft touches. He wasn’t protected. He wasn’t really pushed by the media. He is a guy who should get a lot more credit than he has. The winner of this fight could possibly be pound-for-pound #1.”

Kovalev, the Russian Wrecking Ball, 33, has been dominating boxing’s light heavyweight division with his aggressive, fan-friendly style since his breakout performance against then-unbeaten Nathan Cleverly in 2013. His rise to boxing stardom has been meteoric, as he has gone from an unknown fighter from Chelyabinsk, Russia to headlining HBO Pay-Per-View in just four years after signing with his first promoter, Main Events. Out of of Kovalev’s 30 career victories 26 have come by way of knockout. Additionally, he has entered into championship rounds only twice in his professional career. Kovalev has always sought to test himself against the best boxing has to offer; he wants to prove in the ring that he deserves that mantle. 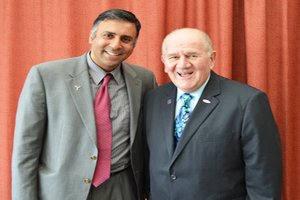 Ward, 32, the last American man to win an Olympic Gold Medal in boxing (2004), reigned as the WBA Super Middleweight World Champion from 2009 to 2015 while fighting mostly out of his hometown, Oakland, CA. He announced his intention to move to up to the light heavyweight division in search of a bigger challenge in 2015, shortly after signing with his current promoter, Roc Nation Sports. He has been a top rated pound-for-pound fighter since 2011. Ward is seeking to assume his place and leave a legacy at the top of the sport.

We look forward to this fight very hard to predict who will win, whoever wins will become the Pound for Pound king in Boxing.., may the best man win.Also see exclusive interview with Sergey “Krusher” Kovalev,