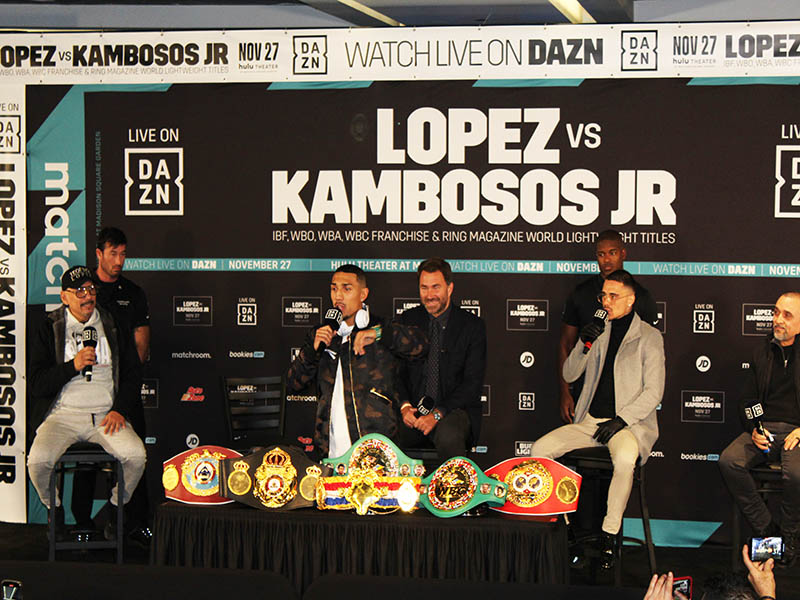 Kambosos Jr. (19-0 10 KOs) and Lopez (16-0 12 KOs) have been itching to get in the ring and end the long-running saga over their clash, which has been cancelled twice since being called with the Australian landing the IBF mandatory spot with victory in London over Lee Selby in October 2020. 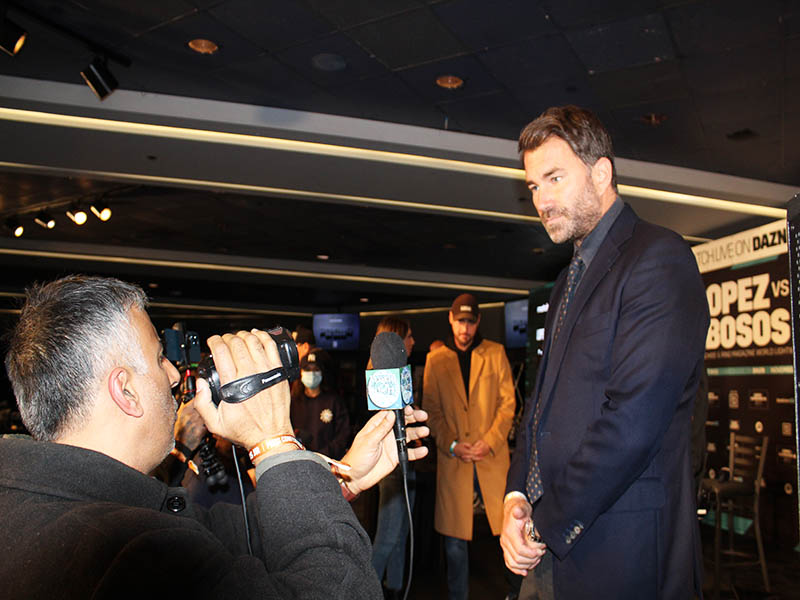 Challenger and champion attended the media workout in New York yesterday, and as their paths crossed in the new Church Street Boxing Gym location near MSG, the teams clashed as the tensions rose between the camps.

Kambosos Jr. and Lopez were bystanders as the teams clashed, and the 28 year old is all business as he looks to rip the titles from ‘The Takeover’ in Lopez’s backyard. 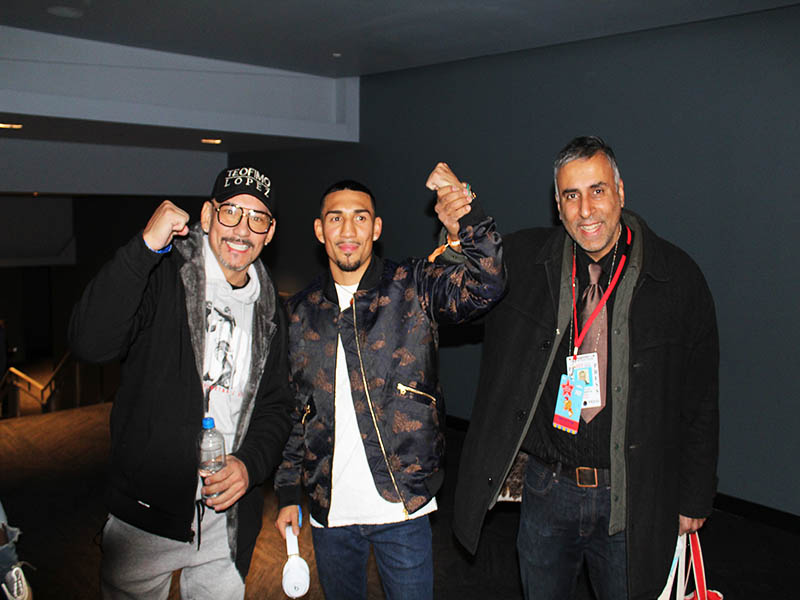 “He’s got a lot of nervous energy and fear,” said Kambosos Jr. “His Dad got put in his place, he knows we don’t play around, we’re here ready to fight, ready for war, and he tucked his tail between his legs and that’s what’s going to happen on Saturday night. 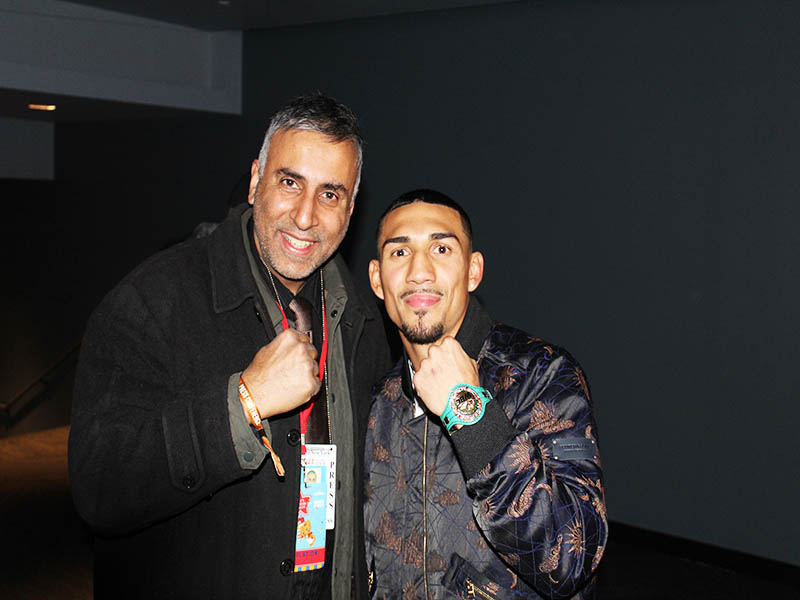 “If they want to get it on my Dad is here too. We all saw it, what can you do? He was lucky that my Dad didn’t really unleash, or he would have not been in his corner on Saturday. If Eddie Hearn and Matchroom pay enough for the old fellas to go at it, maybe we’ll see it!

“This isn’t personal for me. Whatever delusional story he has in his head when he wasn’t even there on June 19, they’re just lying to him and telling him what he wants to hear. I am focused, even with what happened with our Dads, it’s forgotten, there’s no emotion for me, I am here to do a job. 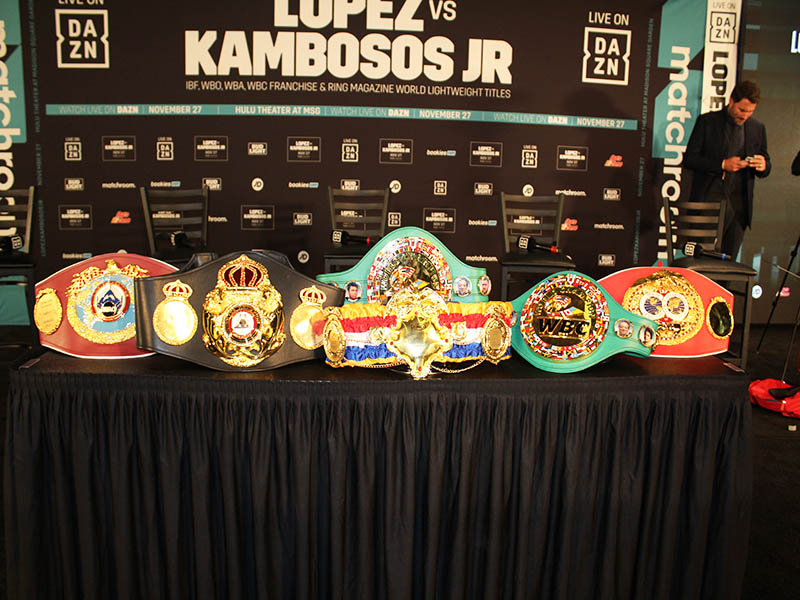 “He’s coming to KO me early? No problem. That’s what I want to do. Victory by any means though, it would mean the world, all the sacrifice and hard work I’ve had to make, that’s what will make this special. It’s for my kids and the people around me, the belts are for them.

“I don’t think about what’s next. Ask Lopez, he thinks one million steps ahead. I’m focused only on him. We’ll see if Josh Taylor gives him a fight without him having any belts and coming off a loss to the Aussie. 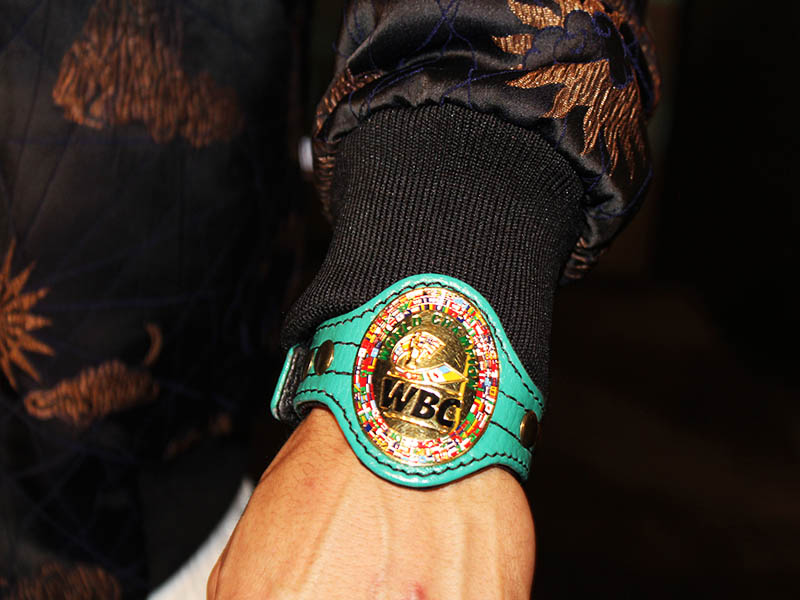 “People say it’s been a long camp, but I am always in the gym, always training and preparing. I live in the gym, and I don’t take a day off, so this has just been like every day, I stay focused and retain the tunnel vision. When you are fighting for all the marbles, are you going to take your foot off the pedal? No. I’ve been very patient and we’re here now.

“I’ve got a very smart team and I am very smart at what I do. It’s not my first rodeo, I’ve been in the big fights, I’ve earned this the hard way. But we’re ready, and we’re clever, and the preparation has been great; there’s no burn out or weight issues, nothing, no emotion, just coming here to win the fight and be a real champion.” 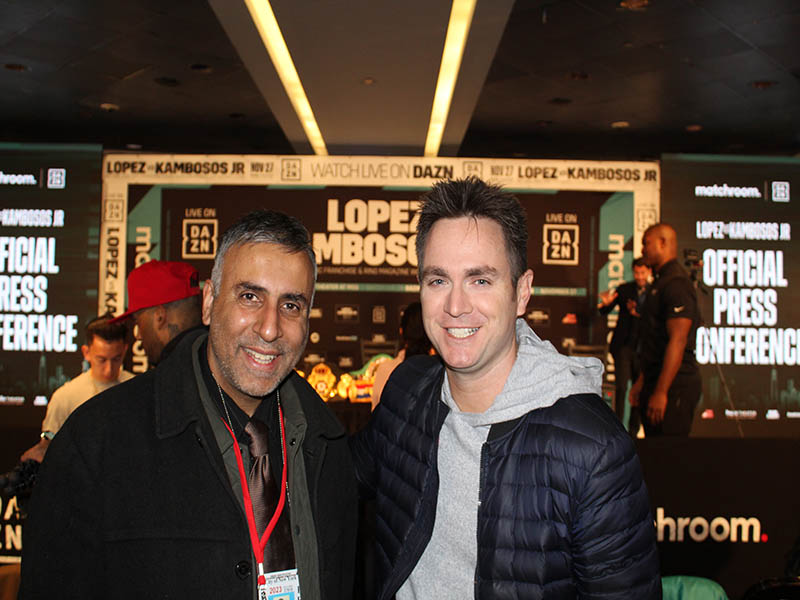 Kambosos and Lopez clash on a huge night of action in New York, with chief support provided by the battle for the vacant IBF World Super-Featherweight title between Azinga Fuzile (15-1 9 KOs) and Kenichi Ogawa (25-1-1 28 KOs). 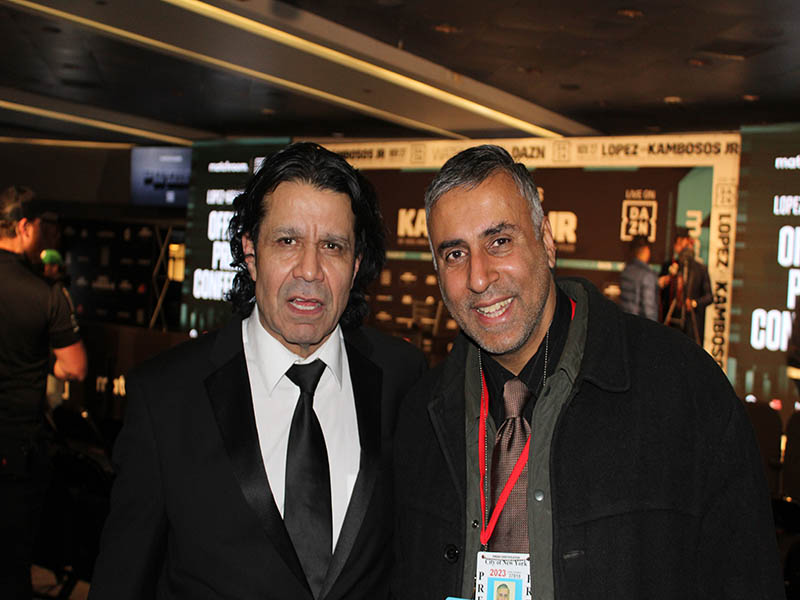 It was a great pleasure to meet and interview Teofimo Lopez The Current IBF, WBO, WBA, WBC Franchise and Ring Magazine World Lightweight titles. Our Prediction for the fight is a late round KO or a stoppage of George Kambosos Jr. Teofimo Lopez is too skilled and powerful for his opponent. See more in our World Liberty TV, Boxing Channels and Blogs by Clicking here.