Commemorating the 50th anniversary of the Stonewall Uprising, NYC Pride will simultaneously host WorldPride during its 2019 season. It’s the first WorldPride hosted on United States soil, and the second North American WorldPride in the event’s nearly 20 year history. 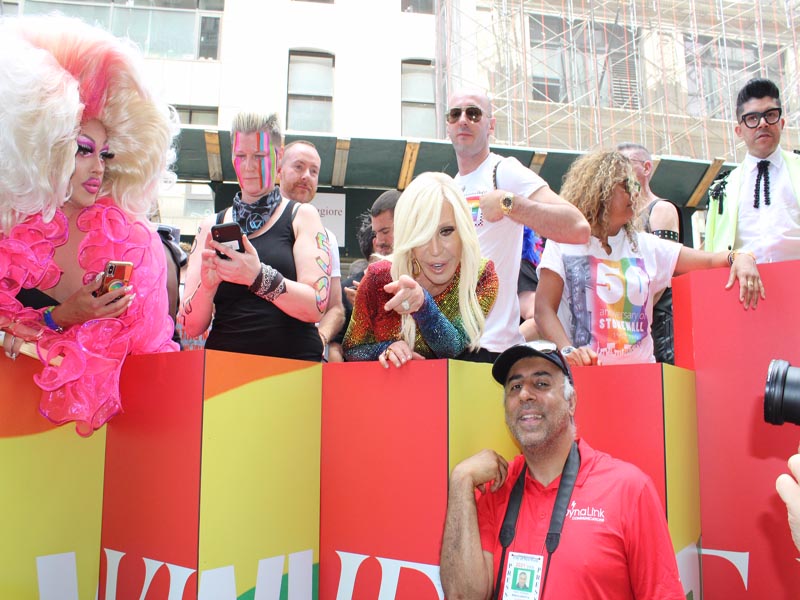 The sixth edition of WorldPride will welcome millions of domestic and international LGTBQI+ guests to New York City. Attendees will encounter a once-in-a-lifetime experience to honor and celebrate the Pride movement in the same location where the modern movement began in 1969. 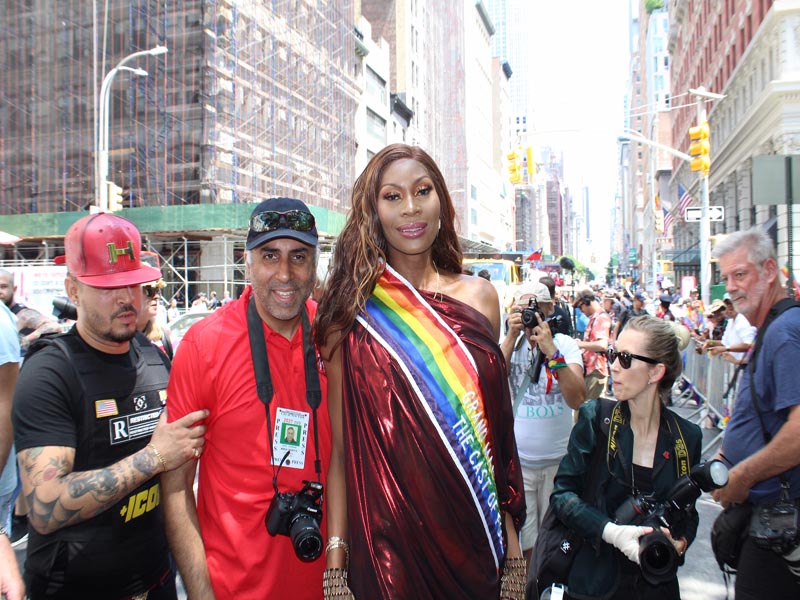 Dr.Abbey with Grand Marshall Dominique Jackson AKA Electra on POSE

Accordingly, NYC Pride’s 2019 season is dually branded Stonewall50 and WorldPride 2019. NYC Pride is producing WorldPride’s official events, including never-before-seen activities alongside special editions of iconic events such as the March, Rally and Pride Island. Full details of the 2019 events will be released in late 2018. 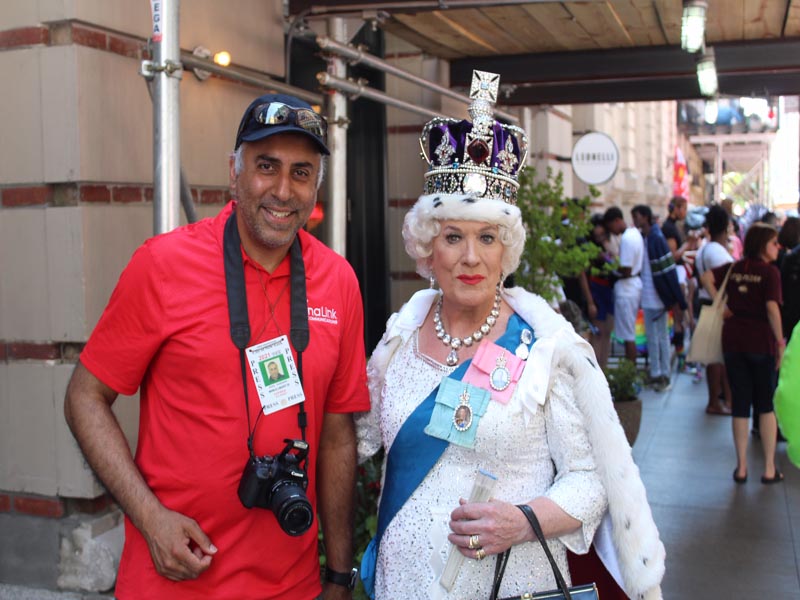 Dr.Abbey with Queen impersonator from England

Stonewall50 / WorldPride 2019’s theme is “Millions of Moments of Pride,” representing the invaluable and countless experiences every person encounters during annual celebrations and commemorations around the world, The Pride experience is as unique as its participants, because it is unique to each participant. 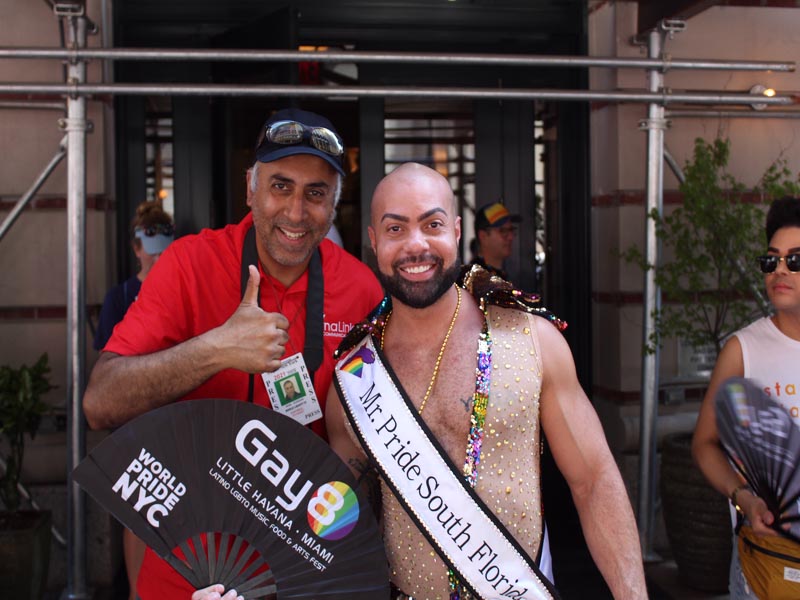 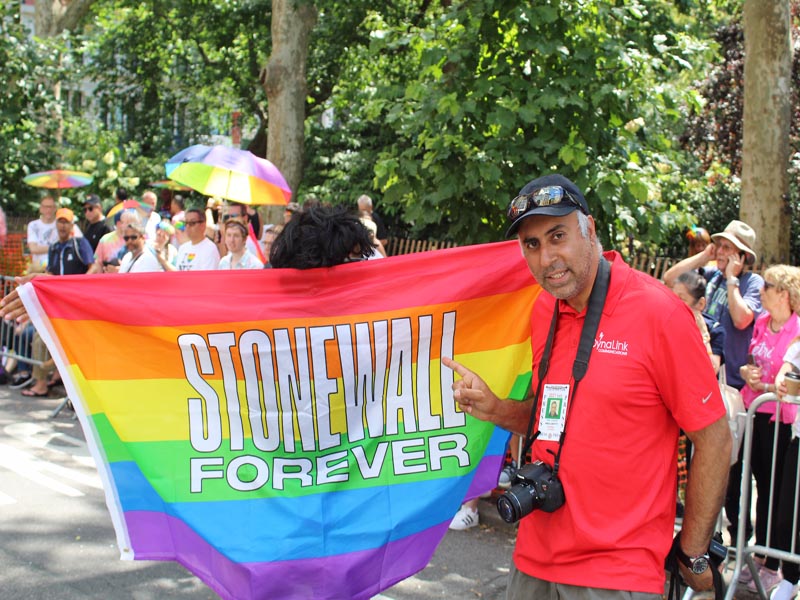 The Banner says it all

Collectively, the community leaves the Pride experience feeling energized and empowered to take on life knowing no one is alone. Only time will tell what awaits each WorldPride visitor during Stonewall50, but it is certain there will be millions of moments they never forget. 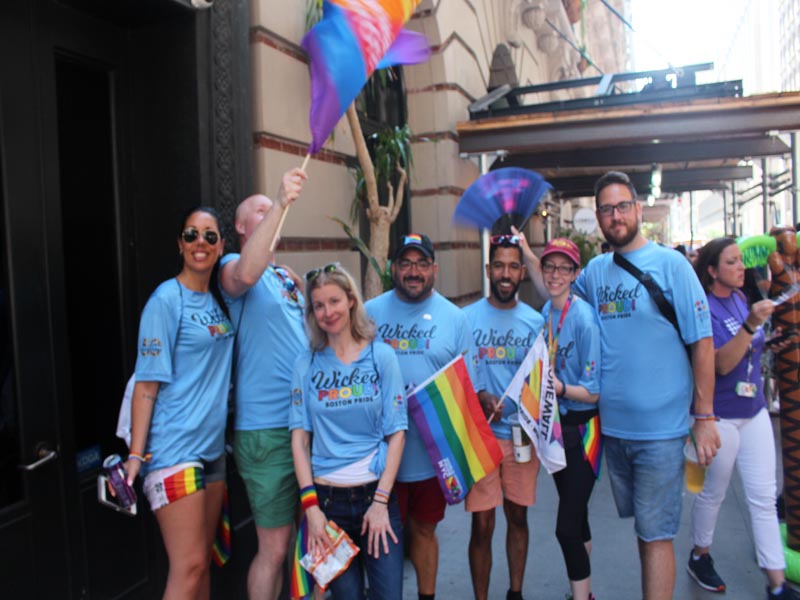 WorldPride is a licensed event granted by InterPride, an international membership organization of Pride organizers. In October 2016, NYC Pride representatives delivered and won the bid to host the WorldPride 2019 in conjunction with the Stonewall50 commemoration year and theme. 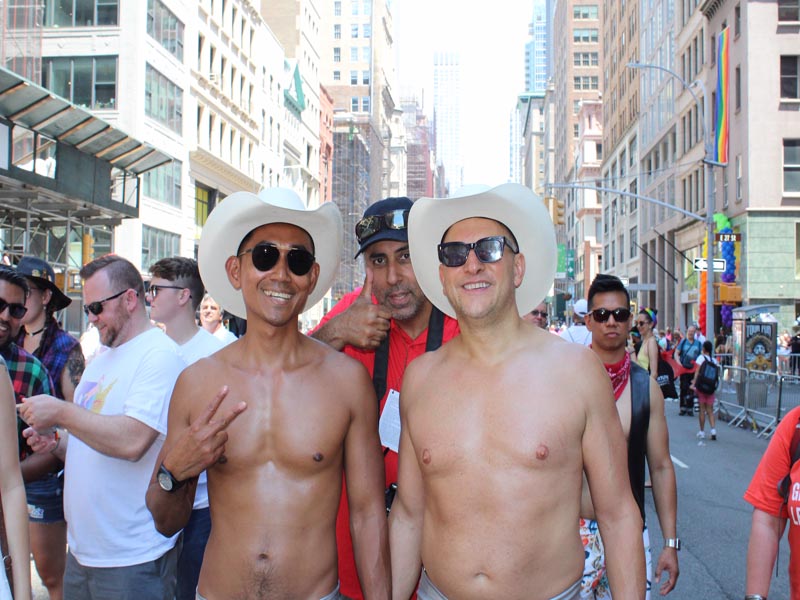 NYC Pride is working closely with state and city officials to produce welcoming events at an unprecedented scale during the 2019 season. 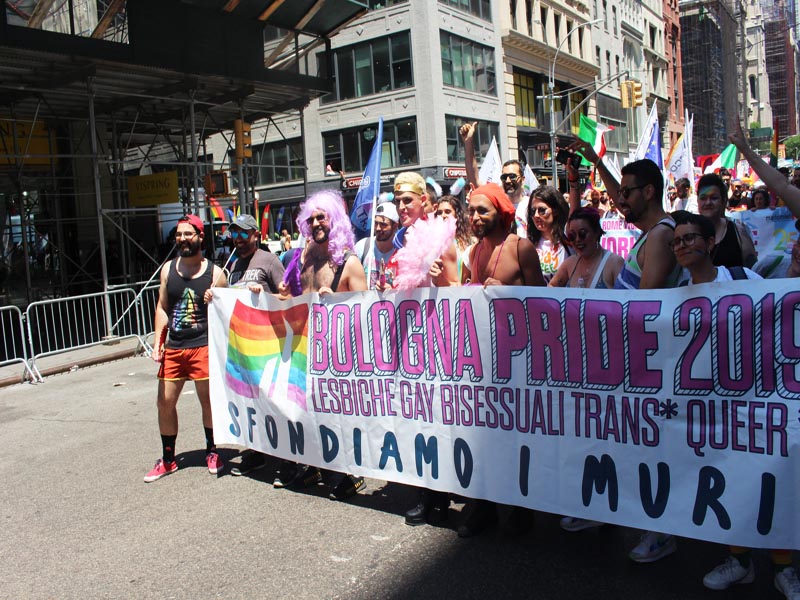 Through grants and outreach, the organization is working closely with community groups to produce new events and scale their existing events to exceed visitors’ expectations during the 2019 season. In 2018, NYC Pride is providing over $150,000 to local organizations, a number intended to increase during 2019. 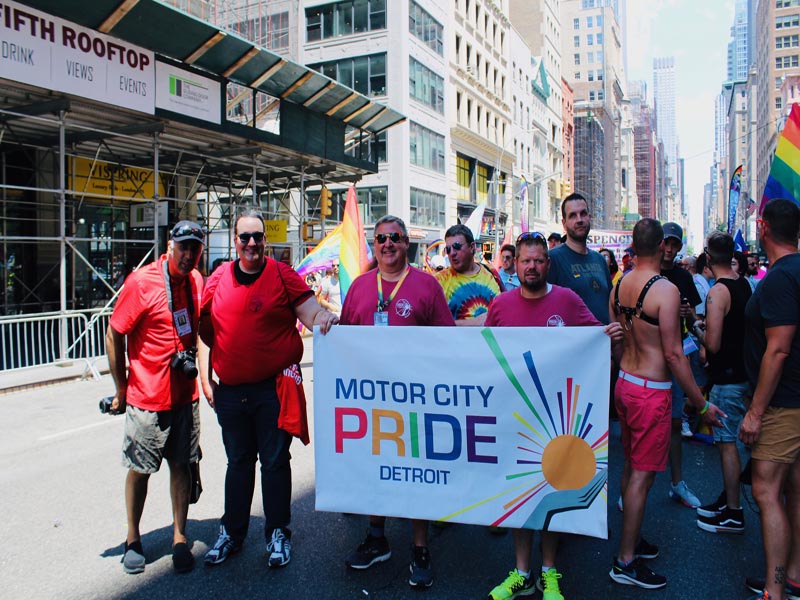 What is WorldPride? WorldPride is a culturally-diverse expression of the quest for equality and liberty of Lesbian, Gay, Bisexual, Transgender and Intersex (LGBTI) people worldwide. It exists to rally the LGBTI communities on a global level, thereby promoting our universal quest for freedom and human rights. (source: InterPride WorldPride committee) 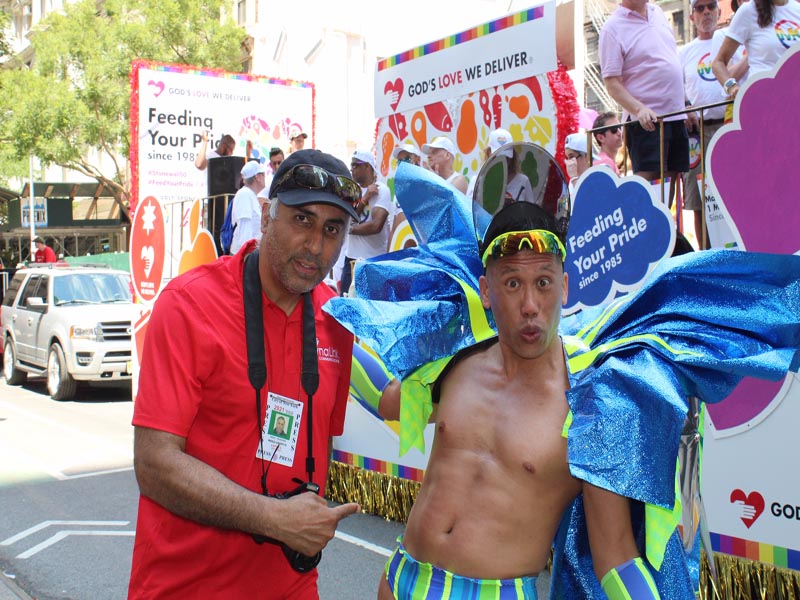 NYC Pride, the official host of World Pride 2019 | Stonewall 50, announces its five Grand Marshals slated to lead both the 50thNYC Pride March on Sunday, June 30 2019, and this year’s commemoration of the 50thAnniversary of the 1969 Stonewall Uprising. The cast of POSE, Phyll Opoku-Gyimah, Gay Liberation Front, The Trevor Project and Monica Helms will head this year’s celebration. 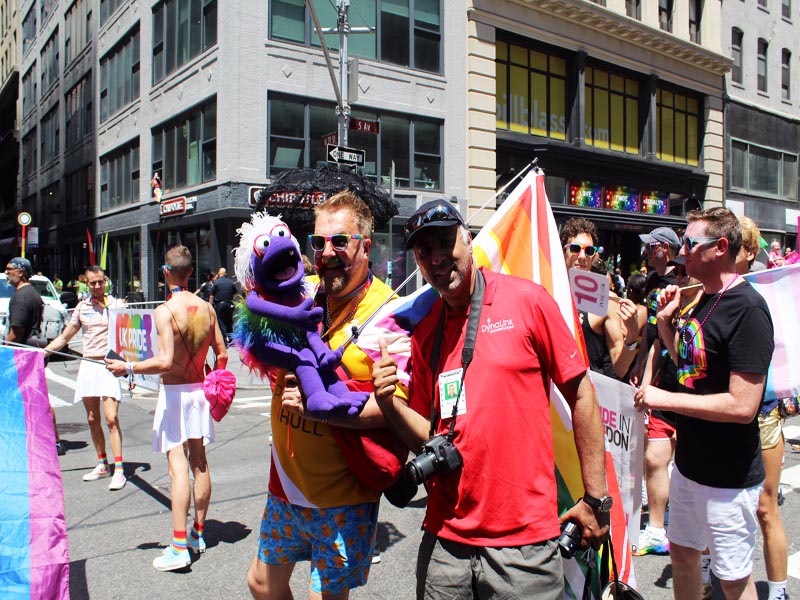 Dr.Abbey with the Puppet master

POSE: Is a dance musical, set in the 1980s,that explores the juxtaposition of life and society in New York: the ball culture world, the rise of the Trump era, and the downtown social and literary scene. Cast members Dominique Jackson (Elektra), Indya Moore(Angel), and MJ Rodriguez(Blanca) will represent the show. 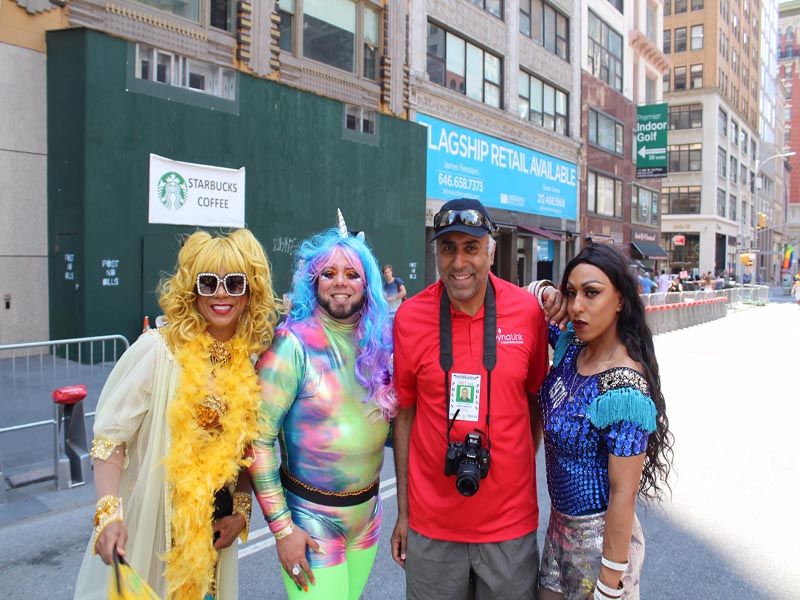 Phyll Opoku-Gyimah : Is the nucleus of the award-winning celebration and protest that is UK Black Pride. Widely known as Lady Phyll–partly due to her decision to reject an MBE in the New Year’s Honors’ list, to protest Britain’s role in formulating anti-LGBTQ+ penal codes across its empire –she is a senior official at the Public and Commercial Services (PCS) trade union as the Head of Equality and Learning. She’s a community builder and organizer; a Kaleidoscope Trust Trustee; an Albert Kennedy Trust patron; Diva Magazine columnist, and public speaker focusing on race, gender, sexuality and class. 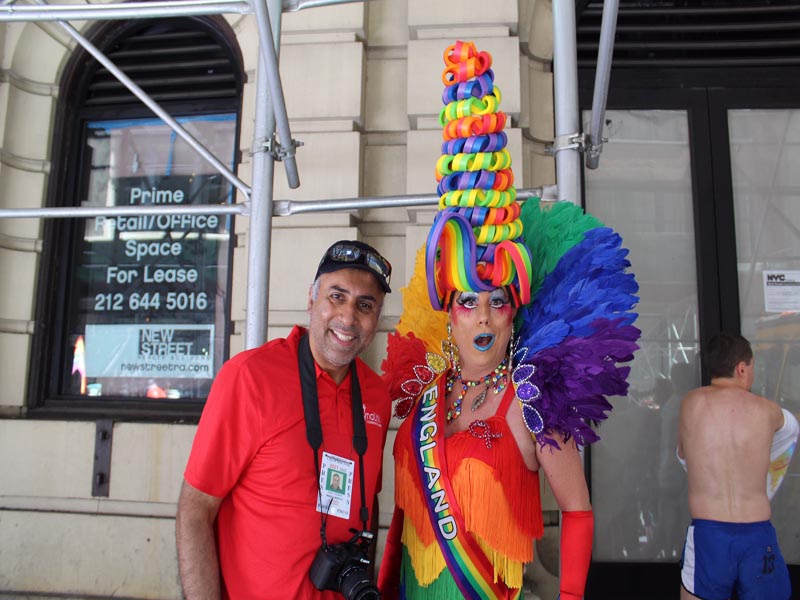 Dr.Abbey with Transgender guest from UK

Gay Liberation Front: was the very first LGBTQ activist organization formed after the Stonewall Rebellion. The courageous members of GLF fought to give political shape and direction to a whole new generation of LGBTQ militancy that spread with unprecedented vigor and impact across the nation and the world. 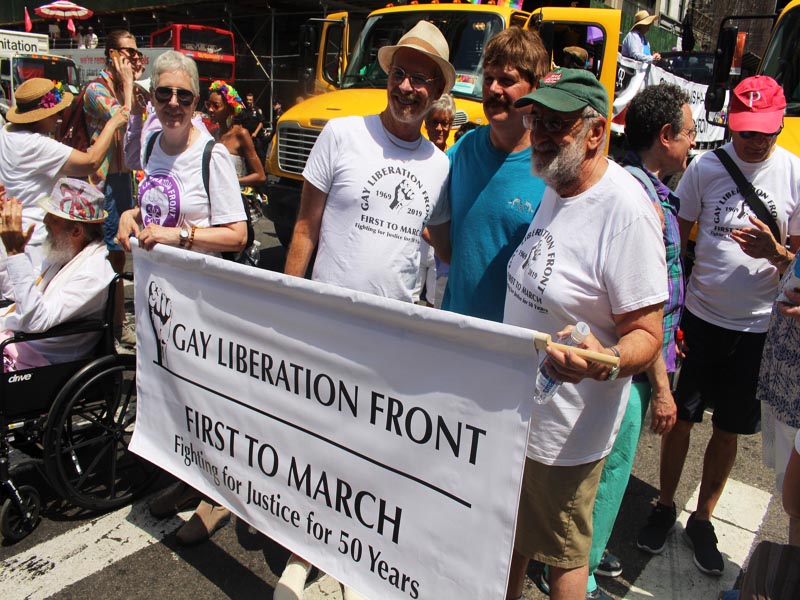 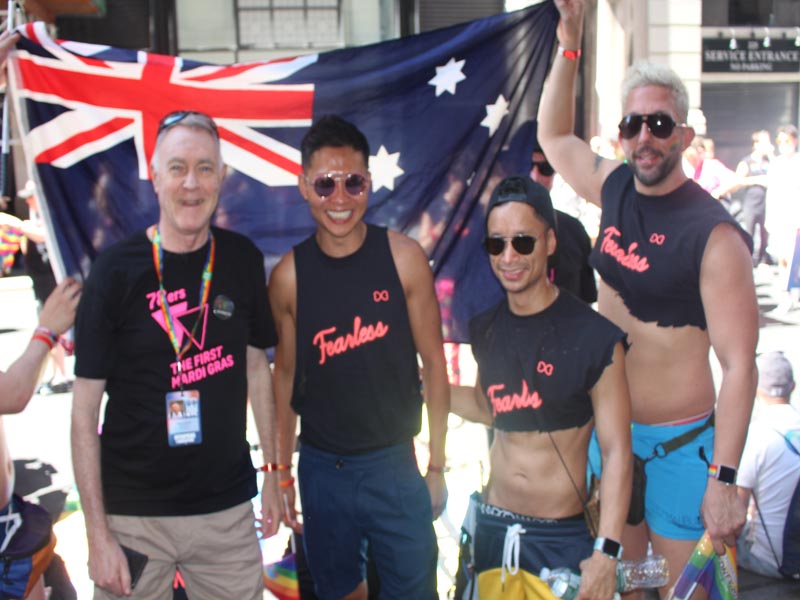 Monica Helms: Is a transgender activist, author, and veteran of the United States Navy, having served on two submarines. She is also the creator of the Transgender Pride Flag, in 1999,and subsequently donated the original flag to the Smithsonian Institution in 2014. 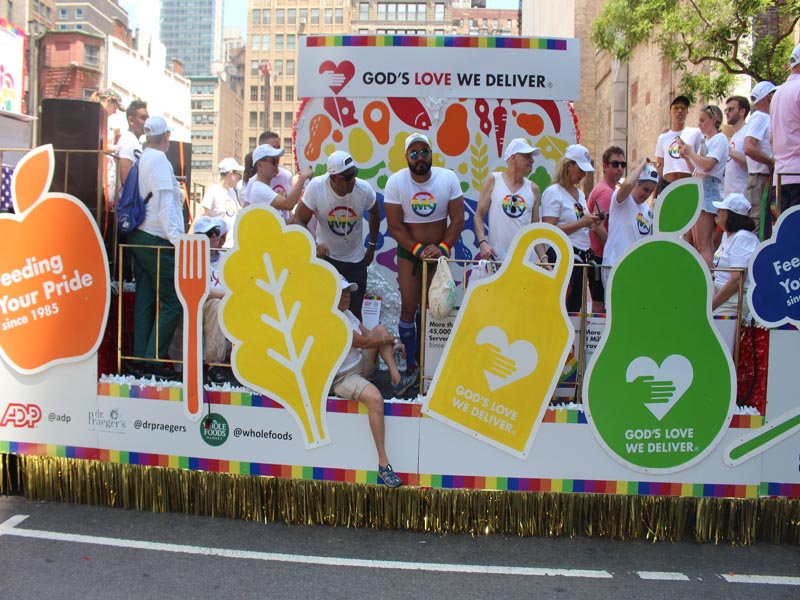 “In a world where LGBTQIA+ people continue to experience profound oppression, the NYC Pride March is a beacon of hope and community,” said Julian Sanjivan , NYC Pride March Director. “This June 30th, that beacon will shine the brightest it ever has when POSE, Phyll Opoku-Gyimah, Gay Liberation Front, The Trevor Project and Monica Helms lead 115,000 marchers in the largest display of LGBTQIA+ pride the world has ever seen.” 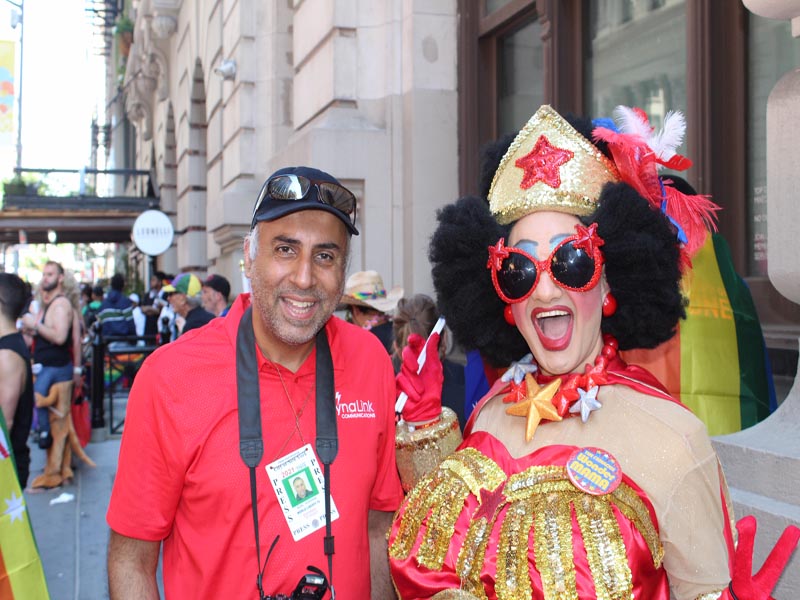 “As millions of LGBTQIA+ folks from across the world make their pilgrimage to World Pride 2019 and the commemoration of Stonewall 50, New York City will display its Pride like never before,” said Chris Frederick, Executive Director of NYC Pride. “The entire month of June, and this day in particular will be a celebration of everything the LGBTQIA+ community stands for.”

The 50th NYC Pride March will commence at noon, on June 30th,from 26th Street and 5th Avenue. Some 115,000 marchers will proceed south on 5th Avenue before heading west on 8th Street. After crossing over 6th Avenue, the March will continue on Christopher Street, passing the site designated, in 2016 by President Barack Obama, as the Stonewall National Monument. 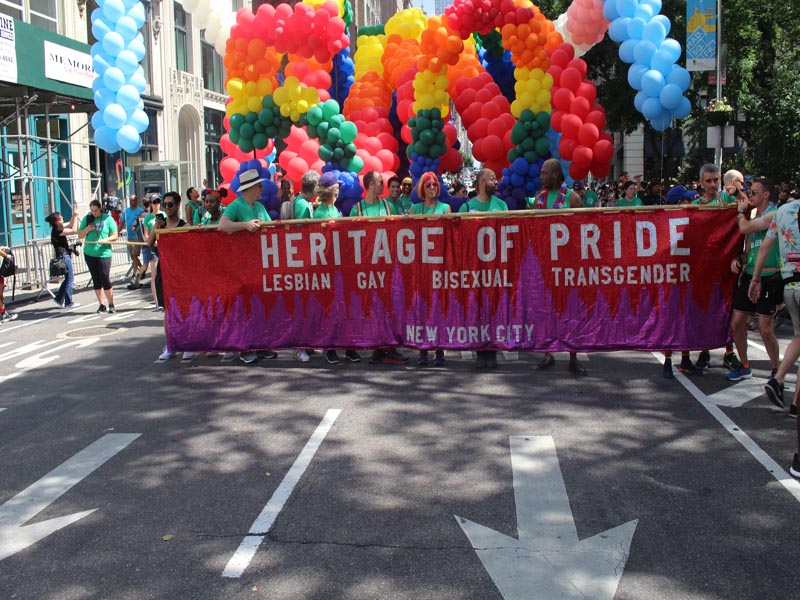 It will then turn north on 7th Avenue, passing the New York City AIDS Memorial, before dispersing in Chelsea just north of 23rd Street and 7th Avenue. 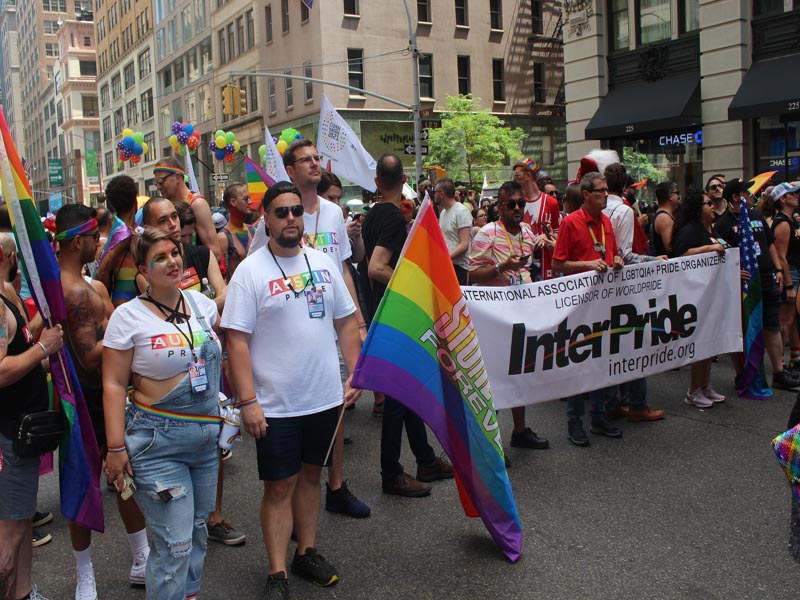 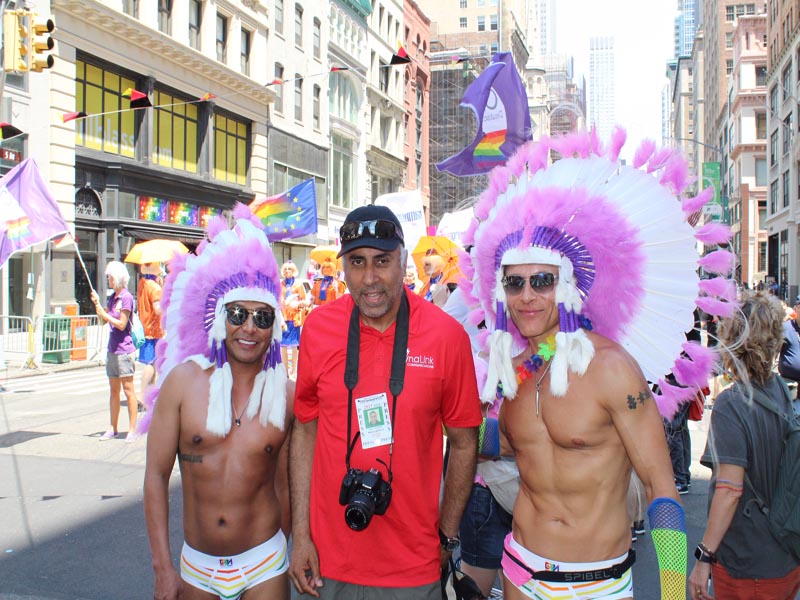 Guess who is the real Indian

WorldPride2019 | Stonewall 50 will be comprised of more than 25 different events for LGBTQIA+ and allied people during the full month of June, 2019. Throughout the course of the celebration, all World Pride events will ladder up to the foundational theme, “Millions of Moments of Pride.” Join New York City, and the world, this June as we honor the past, celebrate our differences and march together for our future. 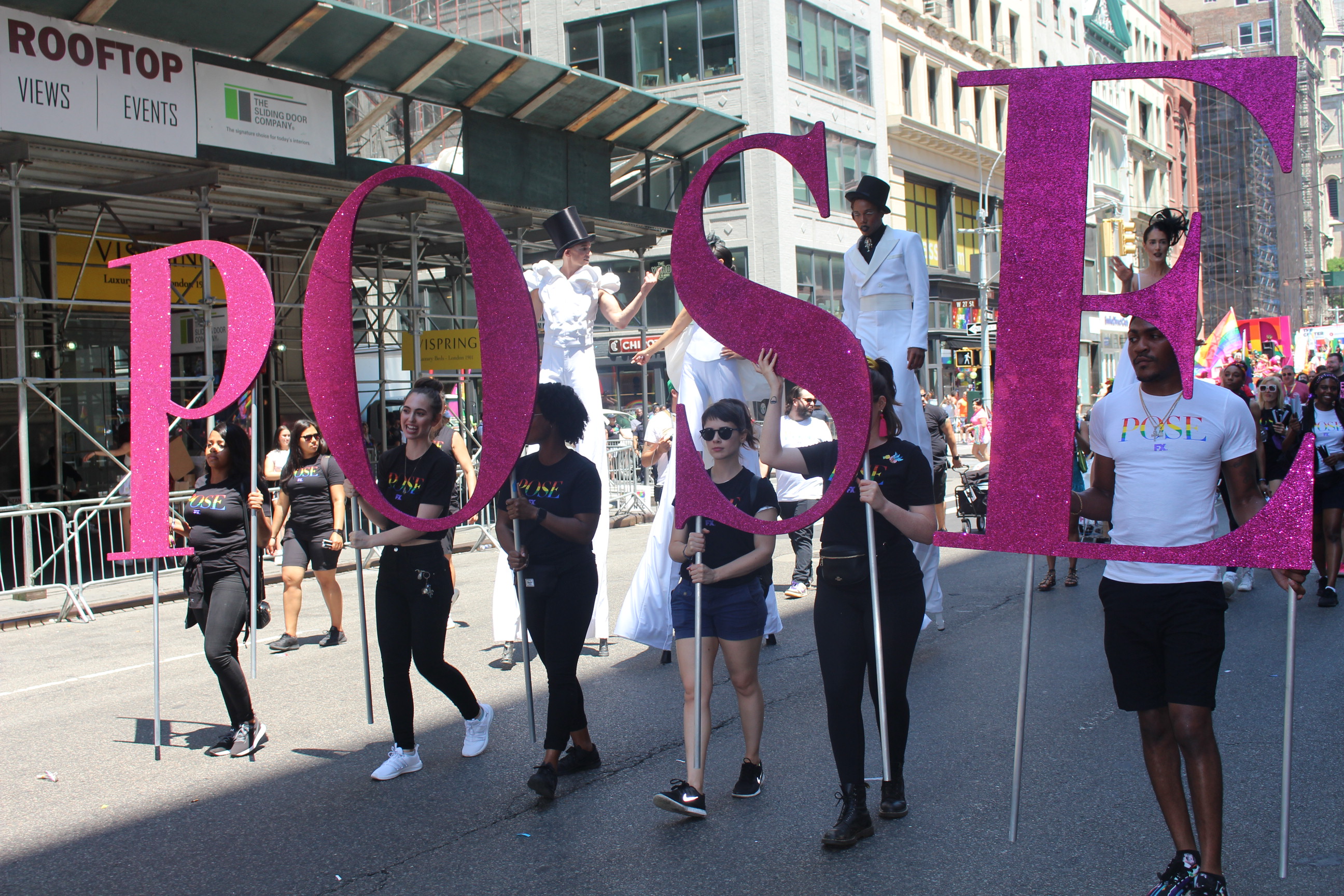 ABOUT HERITAGE OF PRIDE Heritage of Pride, Inc. Is the volunteer-directed organization behind the official NYC Pride roster of events. Heritage of Pride’s mission is to work toward a future without discrimination where all people have equal rights under the law. We do this by producing LGBTQIA+ Pride events that inspire, educate, commemorate and celebrate our diverse community. 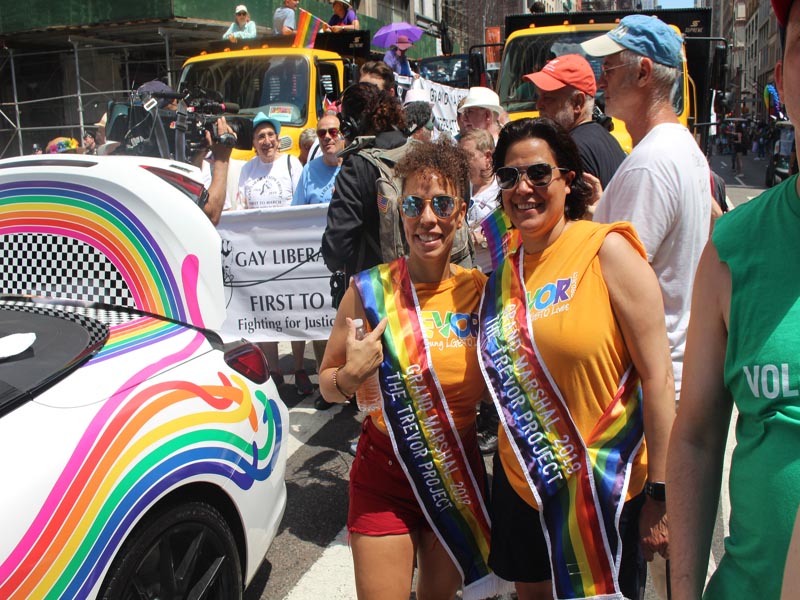 World Liberty TV LGBTQ Channels and Blogs has been covering LGBTQ Events for the past 10 years , showcasing many people make strides in the LGBTQ Communities in the USA and the World, see exclusive footage NYC Pride March, World Pride NYC and  Stonewall 50 Events-2019., in our World Liberty TV LGBTQ Blogs and Channels by clicking here.