New York’s Village Halloween Parade is committed to the cultural and imaginative life of New York City and to the advancement of large-scale participatory events in the belief that such events, when artistically inspired, can play a major role in the resurrection and rejuvenation of the City’s spirit, economy and the life of its people. 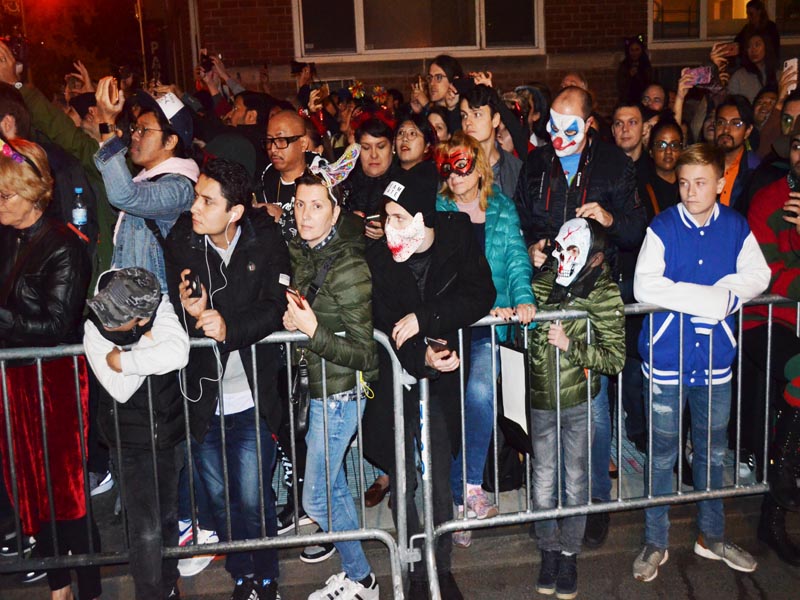 The Halloween Parade plays an important part in the life of the City. It is the only Parade in the country that has at its heart an artistic base. It’s generous spirit has nurtured hundreds of thousands of people who reach into their imaginations and take themselves physically out into public to perform and to celebrate. We believe public events of this sort give people the opportunity to claim the open spaces of their City for purposes other than work; to inhabit them with a sense of freedom and spontaneity; to play, thus renew their relationship to the environment. 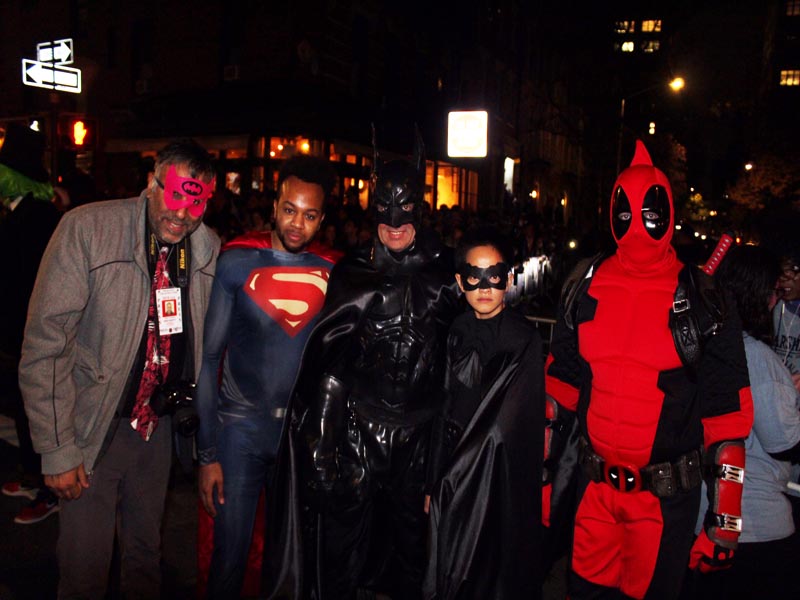 The Parade is a powerful event, for while it is happening, it animates all the senses—sight, sound, smell, taste, color and movement. The emotional response that it generates has a lasting effect on how the participants and those who either watch or hear about the event feel about the places and the people of New York.Fleeting as it may seem, the Annual Village Halloween Parade provides a subconsciously experienced time structure that lends a sense of durability, continuity and community to New York City life. 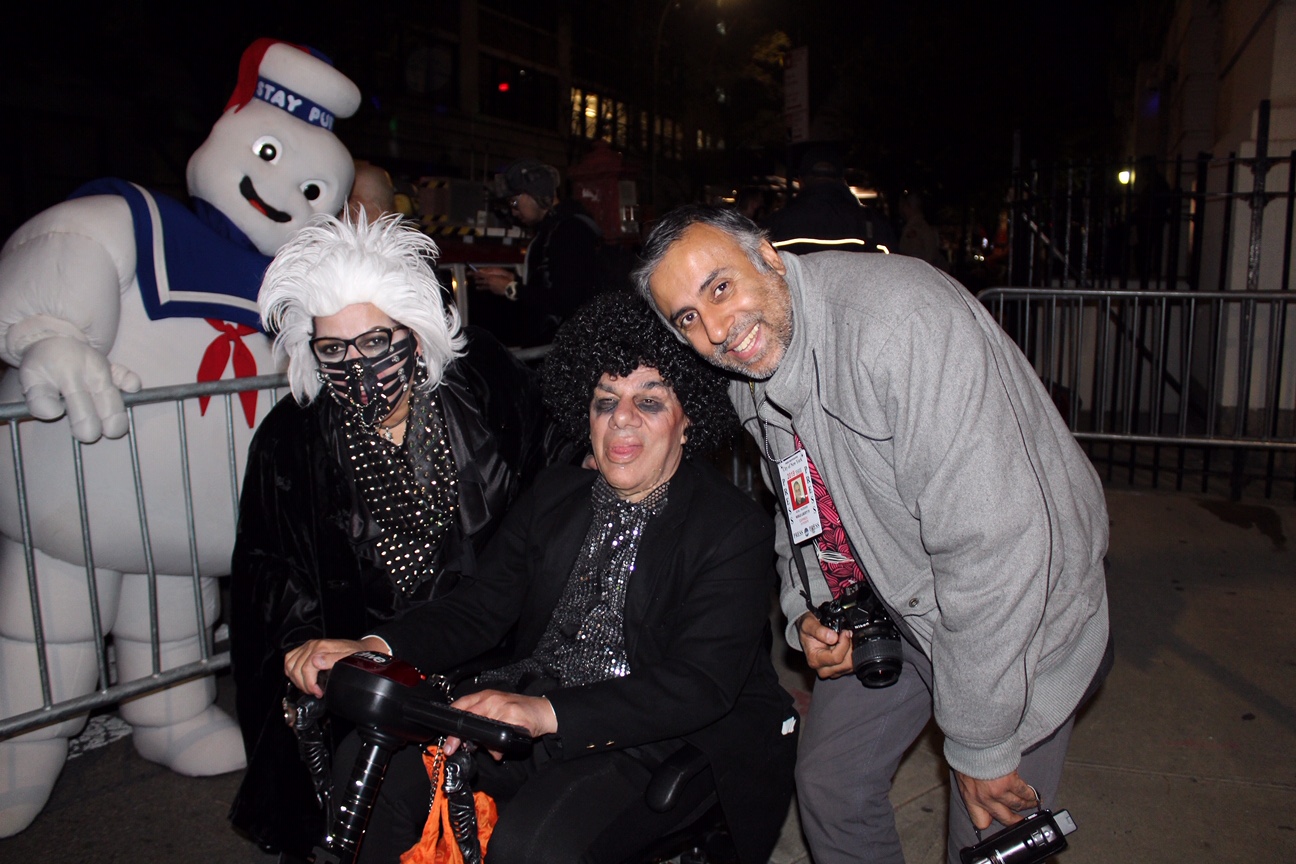 Dr.Abbey with Guests dressed in their Halloween outfits

History of the Parade:   Started by Greenwich Village mask maker and puppeteer in 1974, the Parade began as a walk from house to house in his neighborhood for his children and their friends. 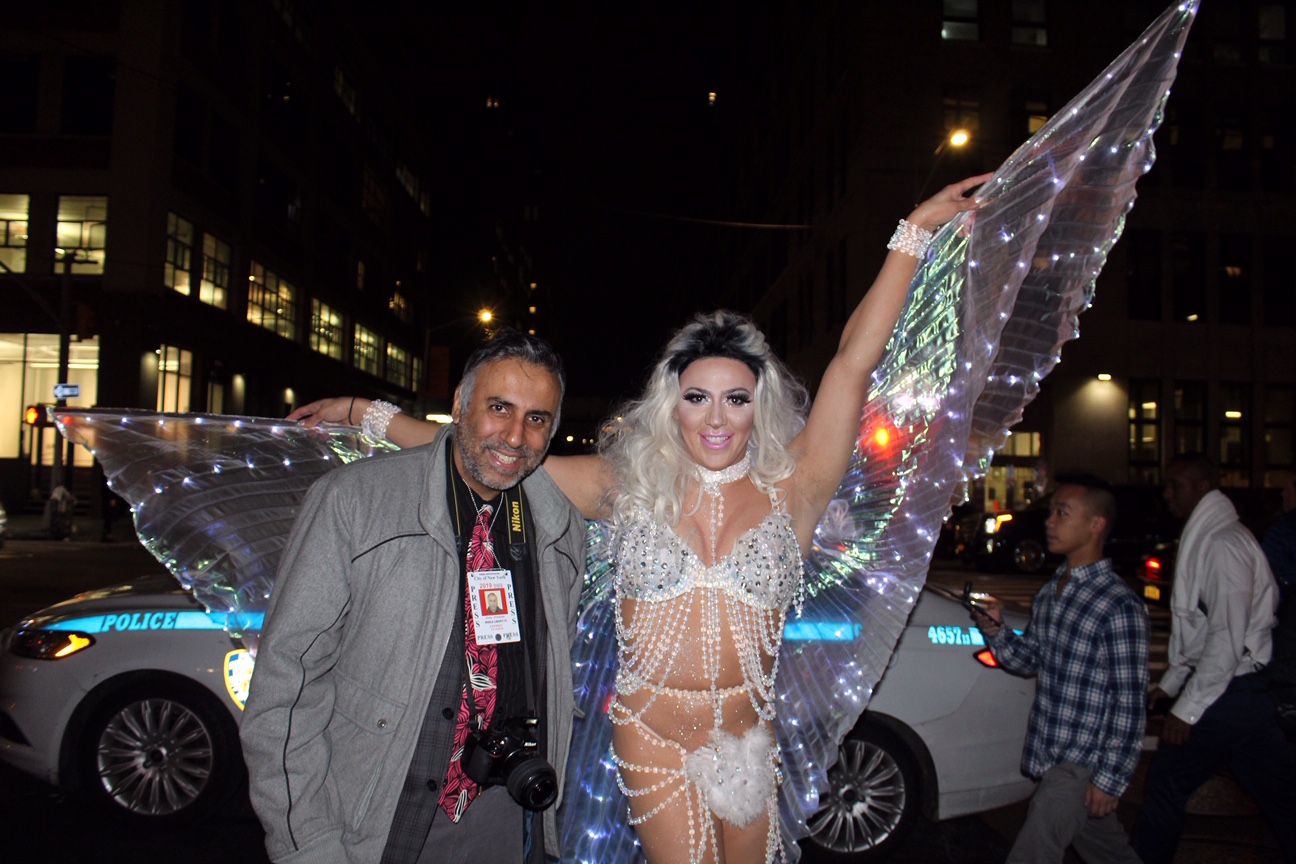 Dr.Abbey with an outlandish Angel outfit

After the second year of this local promenade, Theater for the New City stepped in and produced the event on a larger scale as part of their City in the Streets program. That year the Parade went through many more streets in Greenwich Village and attracted larger participation because of the involvement of the Theater.After the third year, the Parade formed itself into a not-for-profit organization, discontinued its association with Theater for the New City and produced the Parade on its own. 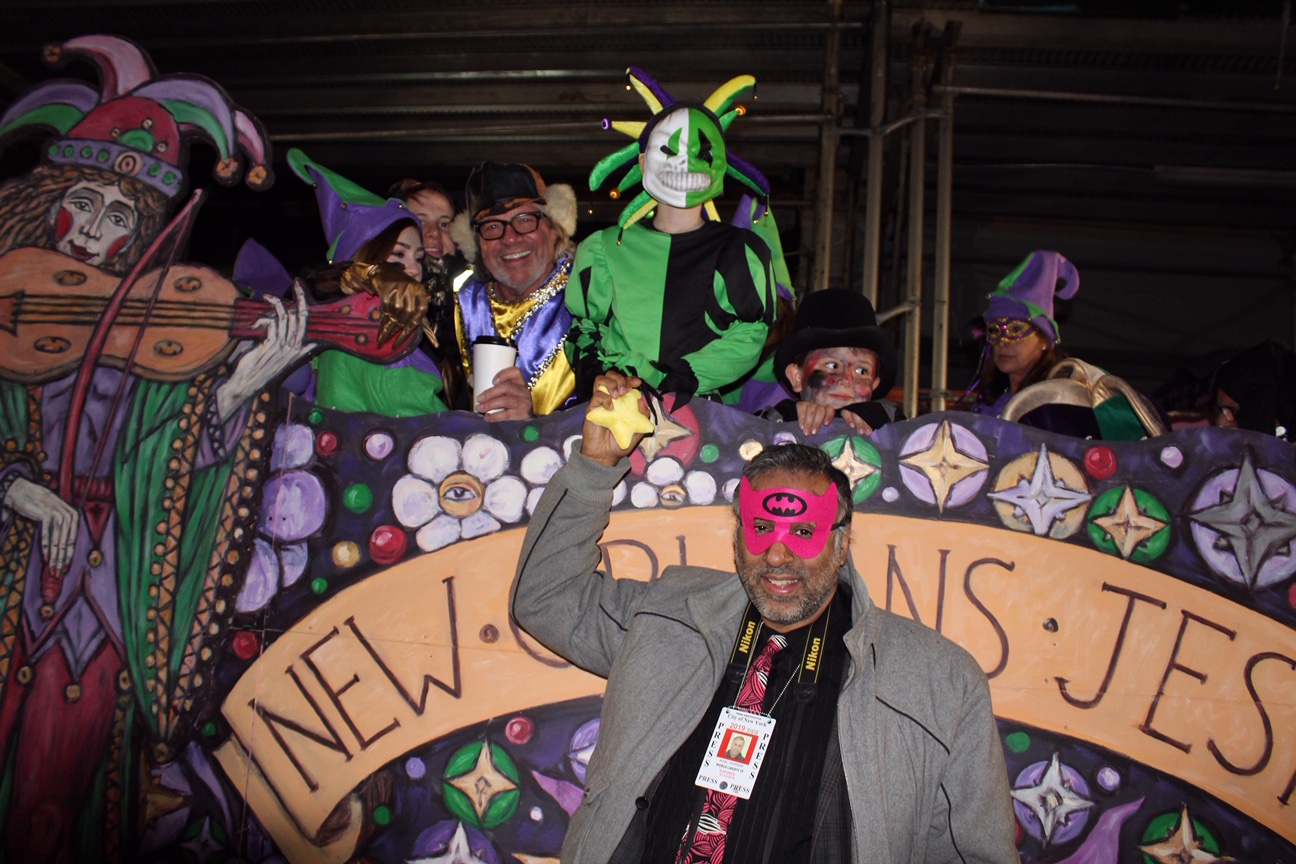 Today the Parade is the largest celebration of its kind in the world and has been picked by Festivals International as “The Best Event in the World” for October 31. 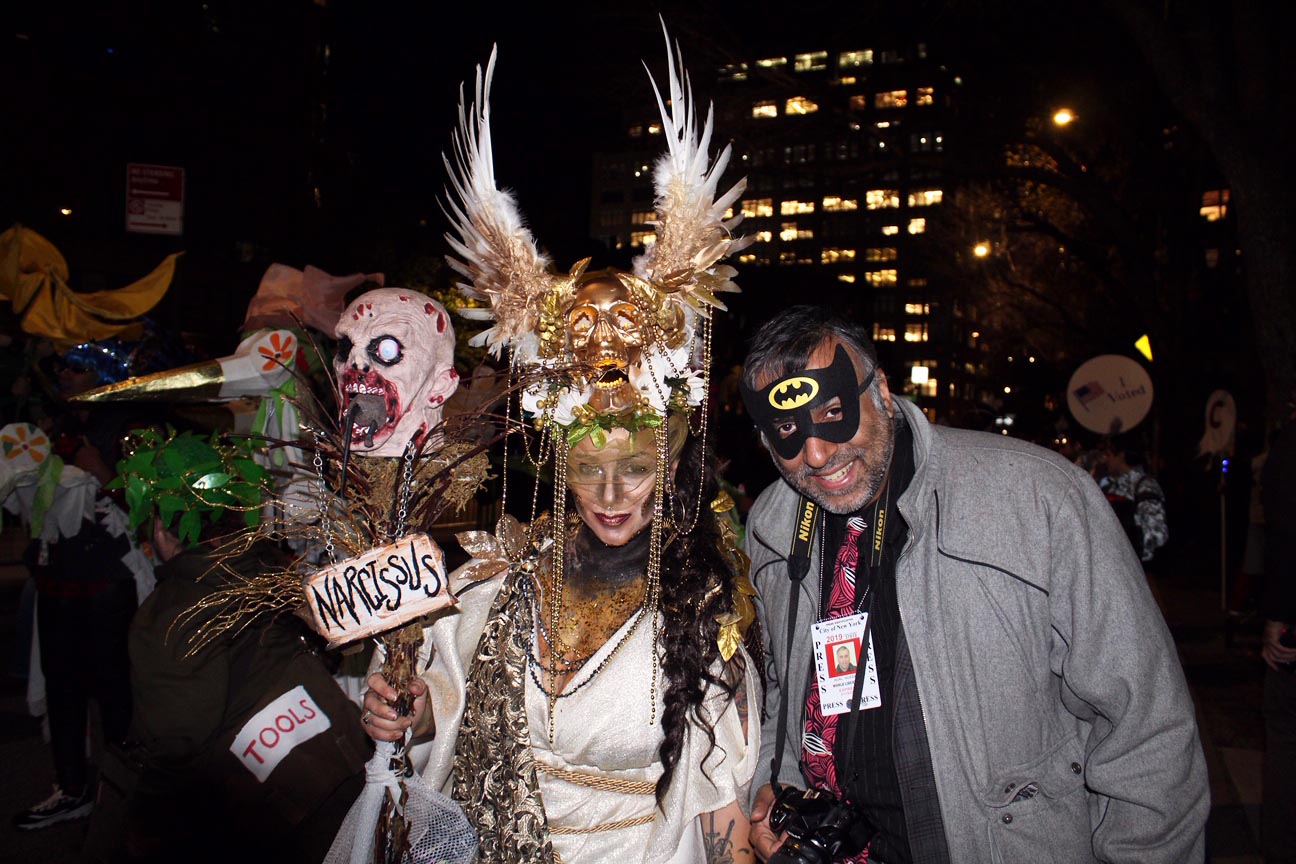 After the 8th year, when the crowd had reached the size of 100,000 Celebration Artist and Producer Jeanne Fleming, a long-time participant in the Parade took over the event. She began working closely with the local Community Board, residents, merchants, schools, community centers and the Police to ensure a grass-roots, small “Village” aspect of the event, while at the same time preparing for its future growth. 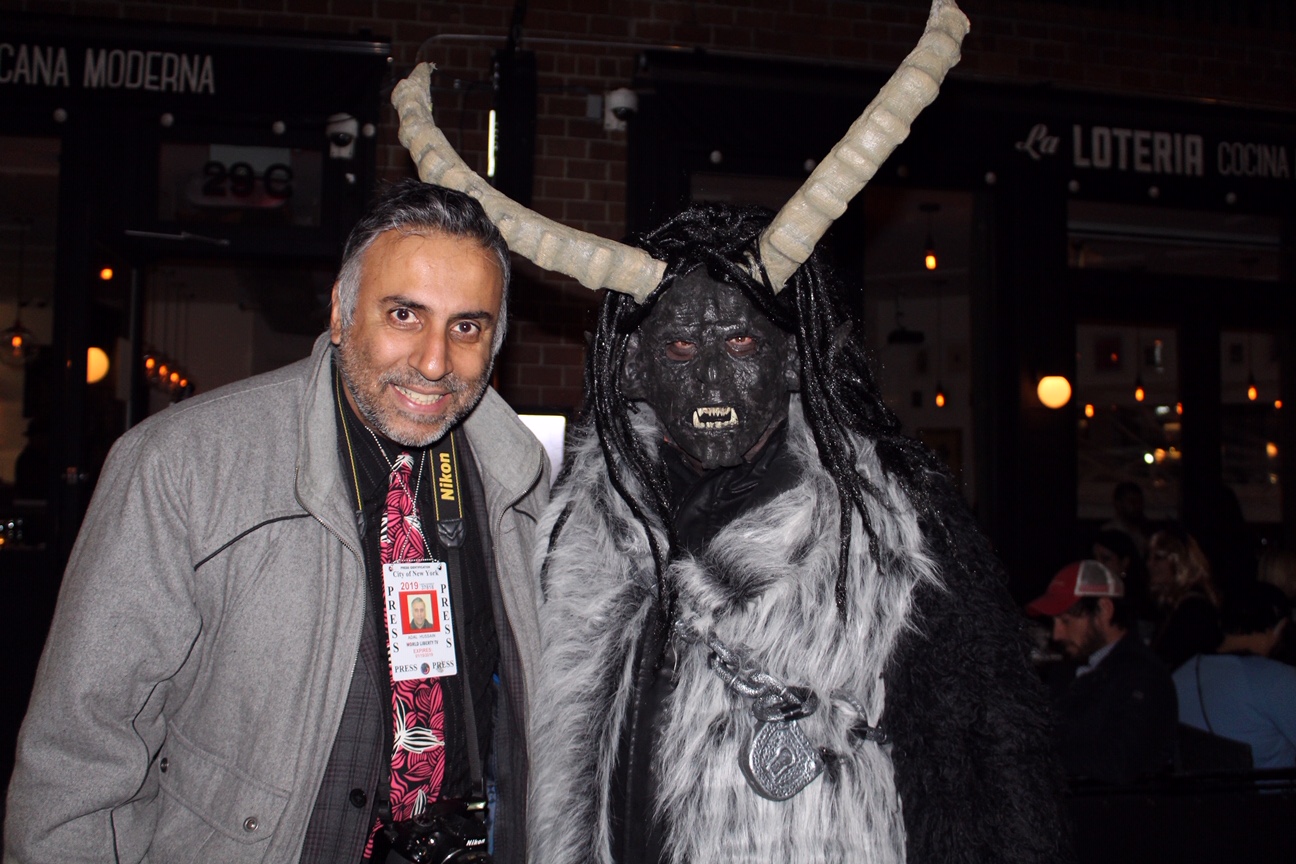 Dr.Abbey with an Halloween guest

Now, 45 years later, the Parade draws more than 60,000 costumed participants and spectators estimated at 2 million. Originally drawing only a postage stamp sized article in the New York Times, now the Parade is covered by all media—local, national and worldwide. 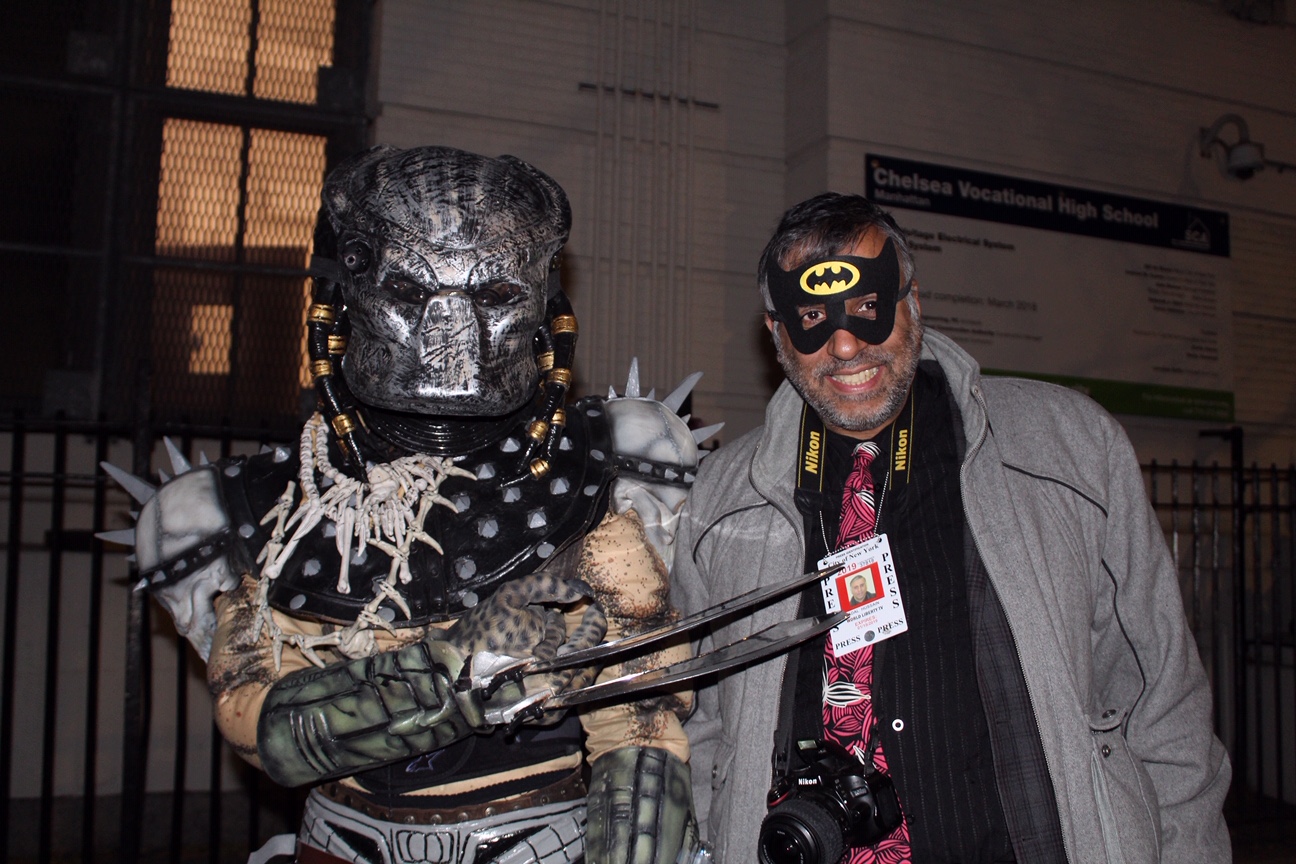 The Parade has won an Obie Award and been recognized by the Municipal Arts Society and Citylore for making a major contribution to the life and culture of New York City. In 1993 the Parade was awarded a major NEA Grant for Lifetime Achievement and in 1993 and 1997—it’s 20th and 25th Anniversary Years— it was awarded Tourism Grants from both the Office of the Mayor of the City of New York and the Office of the Manhattan Borough President in recognition of its economic and cultural contribution to New York City. Additionally, the Parade has been the subject of many books, scholarly dissertations, independent films and documentaries due to its position as an authentic “cultural event.” 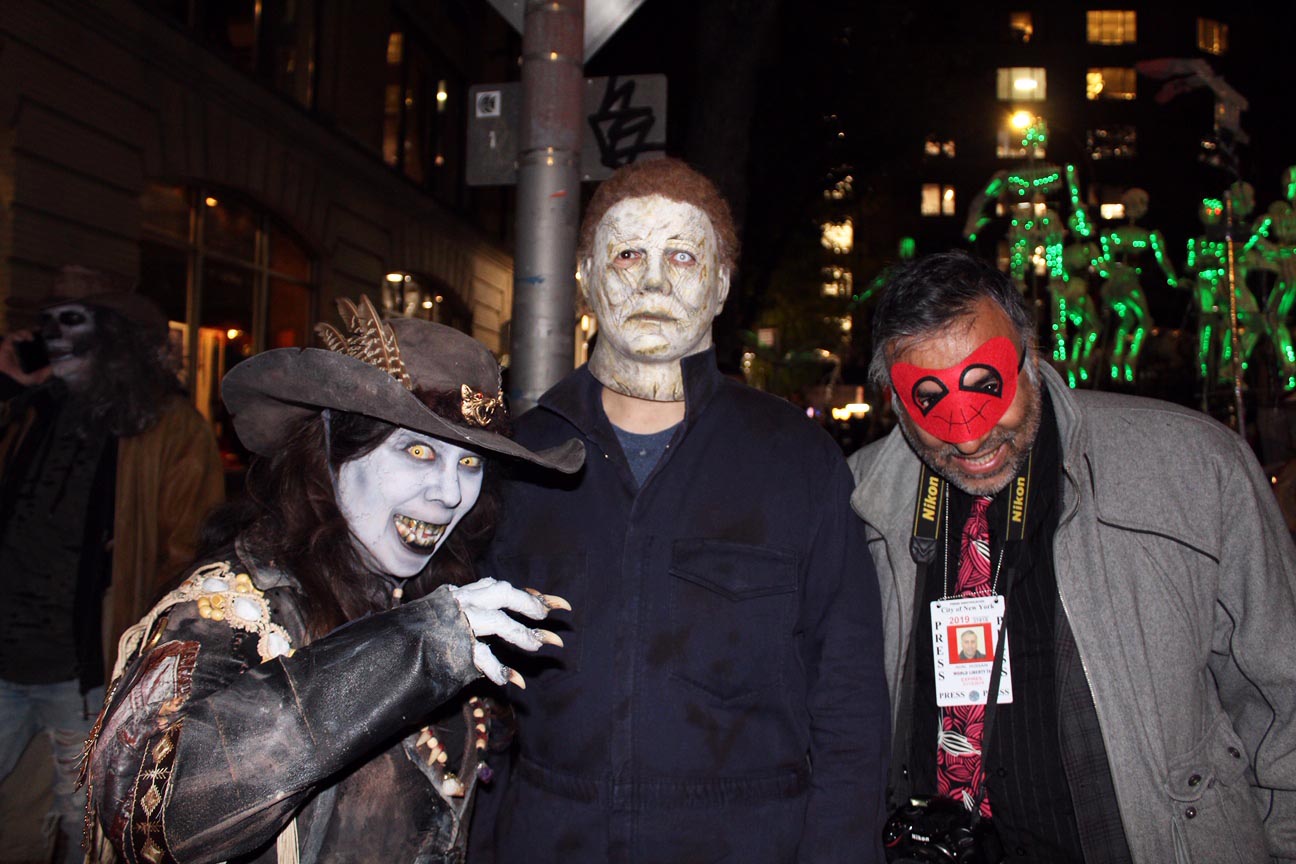 In 1994 The Mayor of the City of New York issued a Proclamation honoring the Village Halloween Parade for 20 years of bringing everyone in the City together in a joyful and creative way and being a boon to the economic life of the City. The Proclamation concludes: “New York is the world’s capital of creativity and entertainment. The Village Halloween Parade presents the single greatest opportunity for all New Yorkers to exhibit their creativity in an event that is one-of-a-kind, unique and memorable every year. New Yorkers of all ages love Halloween, and this delightful event enables them to enjoy it every year and join in with their own special contributions. The Halloween Parade in Greenwich Village is a true cultural treasure.” In that same statement, the Mayor declared the week of October 24-31 to “HALLOWEEK in NYC in perpetuity.” 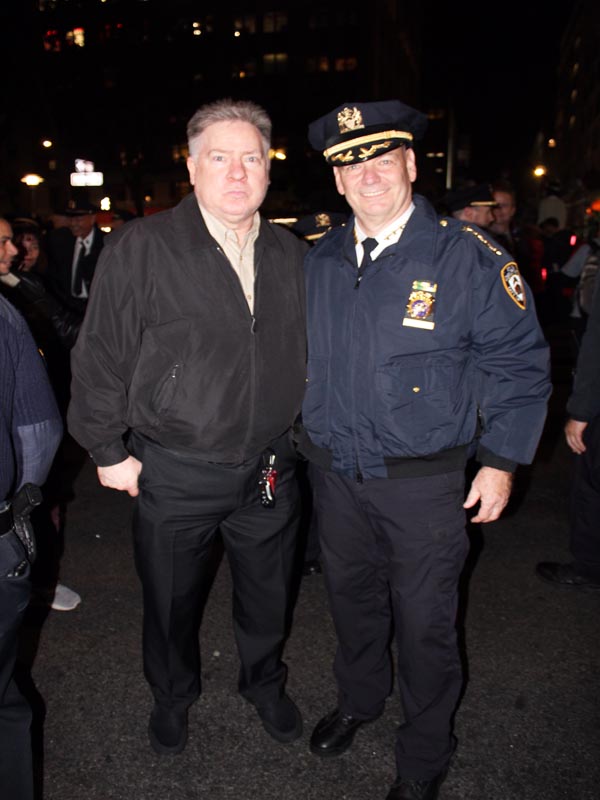 Perhaps our greatest honor came only 7 weeks after the tragic events of 9/11, when Mayor Rudolf Giuliani insisted that the Parade take place stating that it would be a healing event for New York. With the eyes of the world looking at us, we created a giant Phoenix puppet rising out of the ashes.Hundreds of millions of of viewers worldwide watched as the Parade provided tangible evidence that NYC was enduring, safe, surviving, and spirited in the face of great tragedy and hardship. 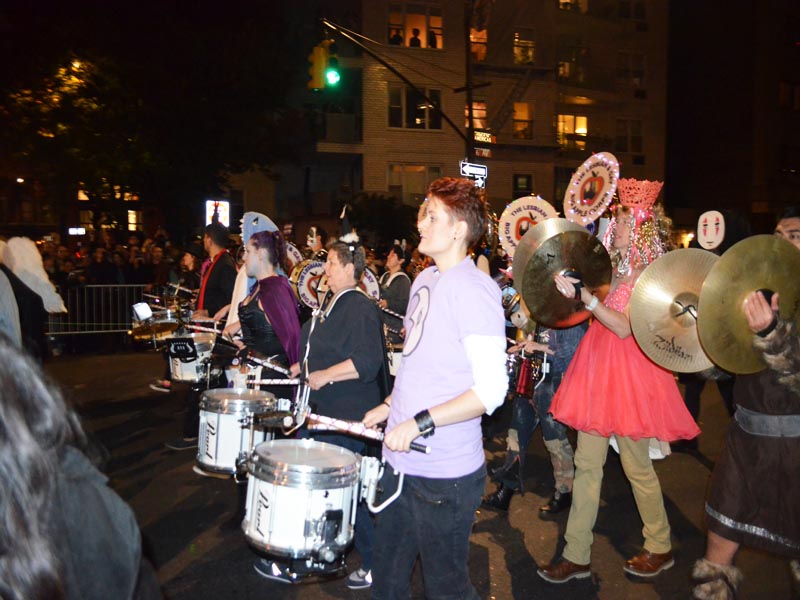 Many marching bands at Halloween Parade 2018

In 2005 we paid tribute to New Orleans and invited all Katrina evacuees to join us in a Funeral Procession Tribute to the stricken city. Over 8,000 evacuees showed up for the Parade and Benefit. 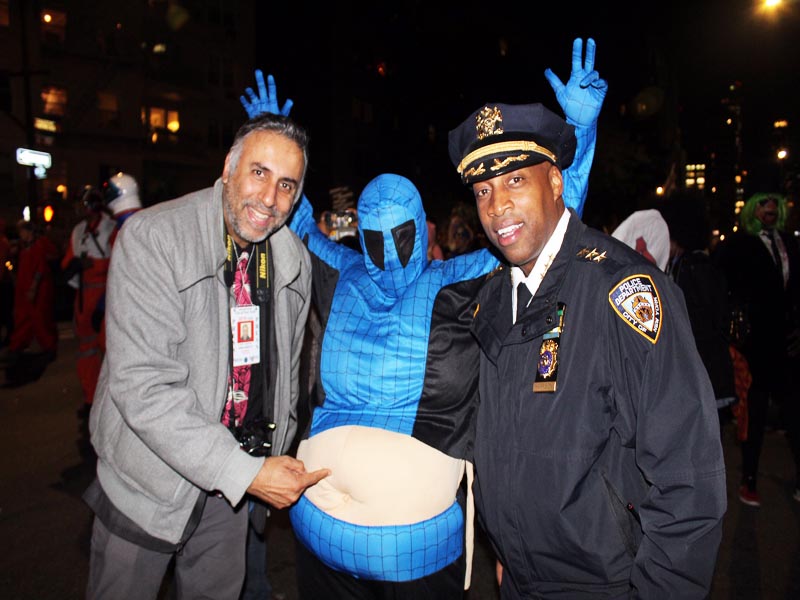 In 2010 the Parade commissioned Haitian Karnaval Artist Didier Civil to make traditional Haitian Carnival figures in a themed element entitled “Memento Mori!” in support of his efforts to rebuild the Art School in Jacmel, Haiti’s center for Carnival. Again, thousands of Haitians participated in the Parade to mourn and remember all those lost in the earthquake. 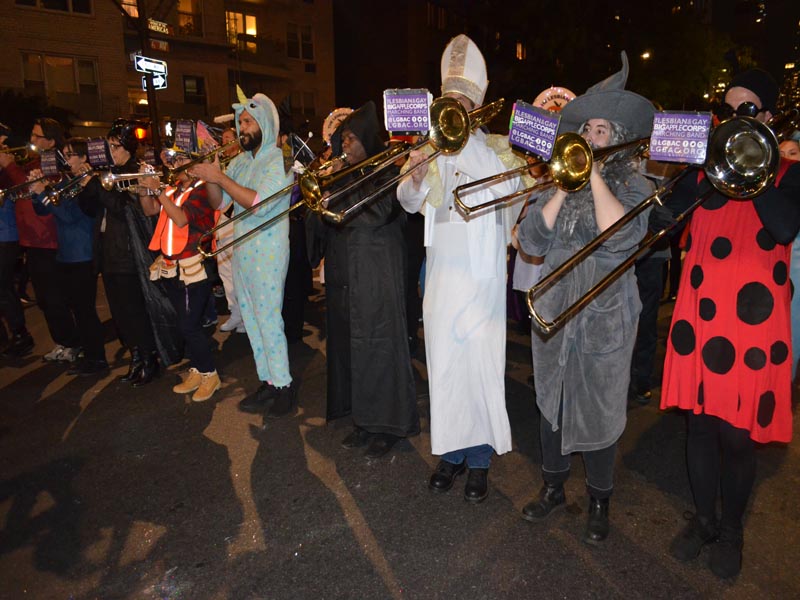 In 2012 Super Storm Sandy forced an unprecedented cancellation of the Parade, prompting us to call for public support to save the Parade after it suffered serious financial losses. 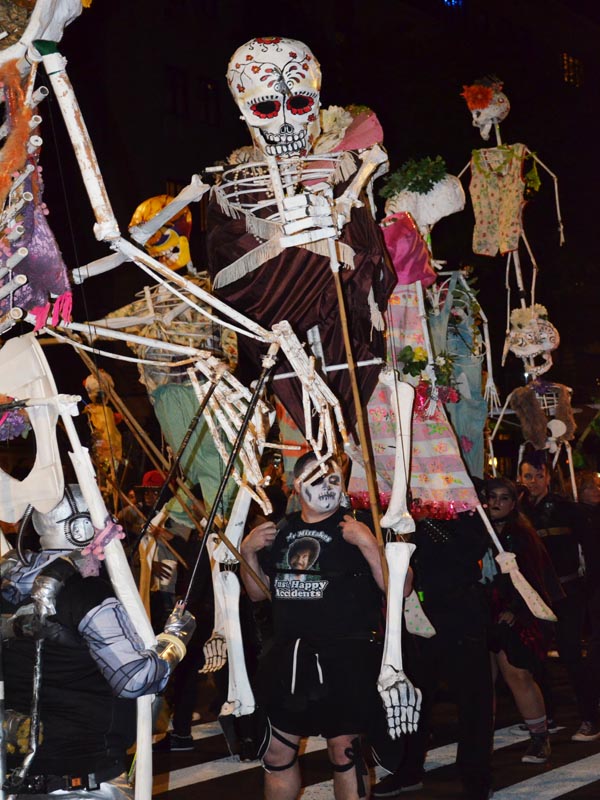 The 2013 Theme was Revival!  Hallelujah Halloween! Bring Halloween Back to NYC!  Thanks to a very successful Kickstarter Campaign the Parade was able to live on!  Thank you to everyone who helped keep this great NYC tradition alive! In 2015 we re-staged the Parade for the opening scene of the Teenage Mutant Turtle Movie 2, released in June 2016. 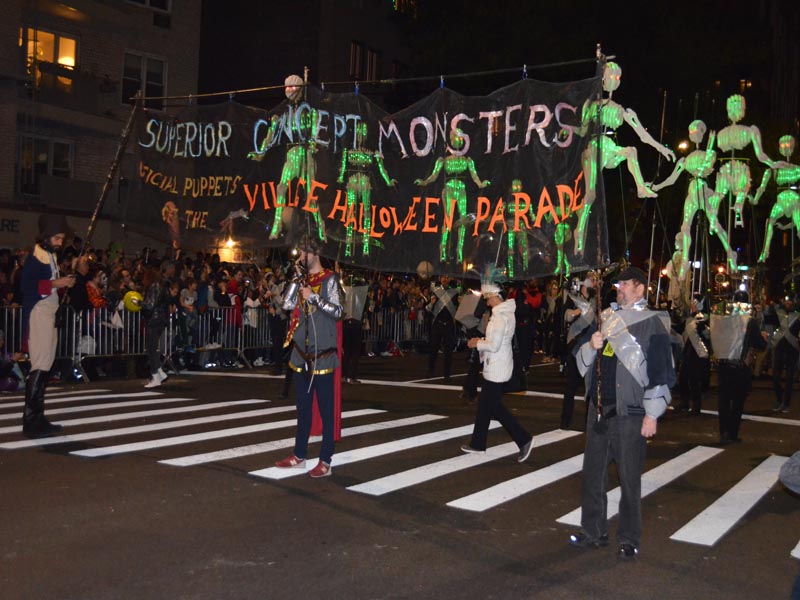