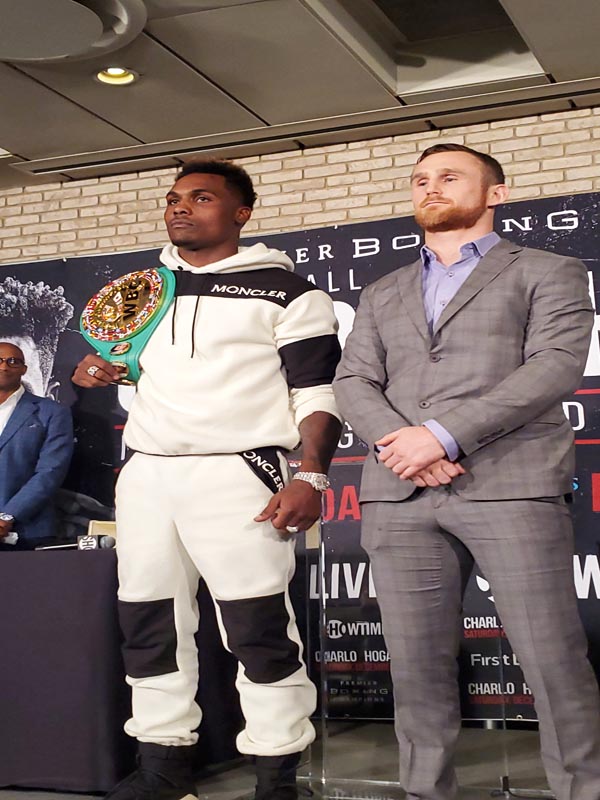 Charlo & Hogan doing a face off

SHOWTIME CHAMPIONSHIP BOXING® begins at 9 p.m. ET/6 p.m. PT and will see Charlo look to make the second defense of his middleweight title against the Irish Hogan, who fights out of Australia and nearly captured a 154-pound crown earlier this year.

Here is what the press conference participants had to say Thursday from the Dream Hotel Downtown in Manhattan:

JERMALL CHARLO: “Brooklyn, we’re back. It’s been a while since we’ve fought here but Barclays is home for Lions Only. Barclays Center is the spot where everyone wants to fight. It feels like a new home.

“I want to thank Dennis Hogan for accepting my challenge. This belt isn’t going anywhere. I’m making a home for it at Barclays Center.

“Hogan has some big hopes. Middleweight is my division. I want the biggest fights at 160. That’s not on the menu right now, so I’m going to take care of what’s here.

“I am the best fighter at 160-pounds. In due time, the world will get a chance to see me reveal the best version of myself. 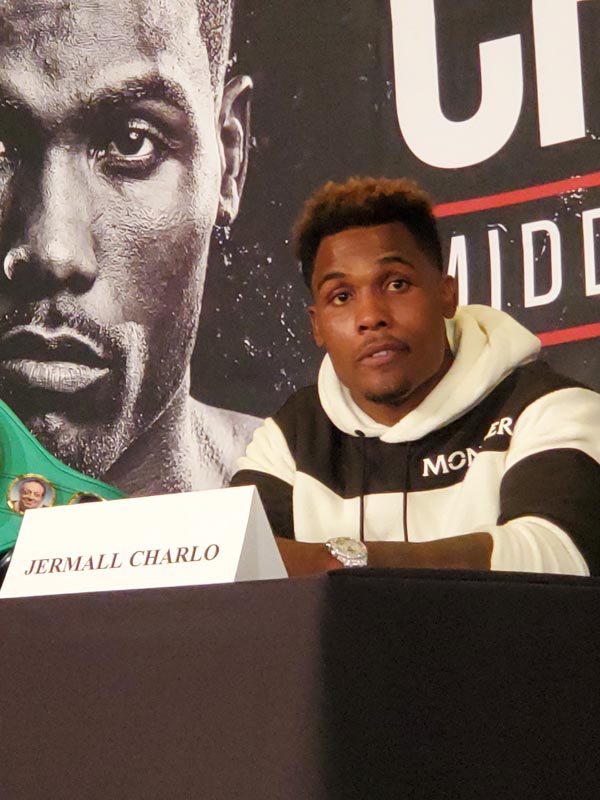 “I’m not worried about Hogan’s confidence. He is just number 30 to me. We’re going to get in there well prepared. I could fight tomorrow. Hogan is going to get a chance to see what he can do against my speed and my skills.

“This training camp has gone really smooth so far. I’m focused on being relaxed in the ring, so that when it’s time to explode, I’m ready. I want to go in there and have fun and keep working towards that next level. 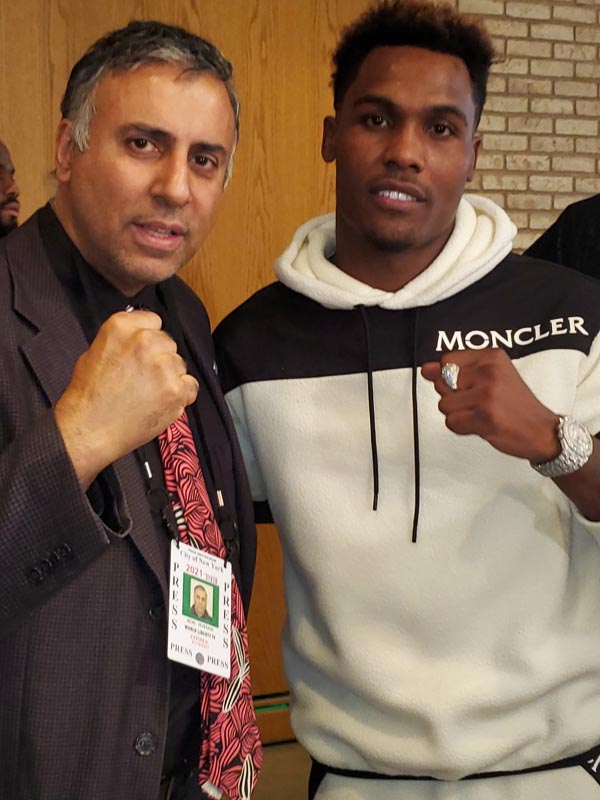 “We’ve watched what we need to of Hogan. He’s not on my level. It’s time to get back to where I’ve always been. Barclays Center and SHOWTIME is my comfort zone. I’m on fire and I’m ready. I’m back where I want to be.

“I’m coming to Barclays Center to beat Hogan down. That’s what I’m going to do. I’m one of the best finishers in the world and I’m going to get a chance to show everyone on December 7.”

DENNIS HOGAN: “I’m very happy to be here in New York. I’ve fought here before and it’s always a great time. I’m looking forward to getting back in there again and being part of the rich boxing history of this city.

“I’m looking forward to becoming the next Irish fighter to come to New York and become a world champion.

“I believe that me taking this fight speaks volumes on what kind of fighter I am. I’m on record that I feel like the champion in my heart, and it’s only a matter of time before the belt is on my wait. It’s destiny. It’s time for me to become world champion. 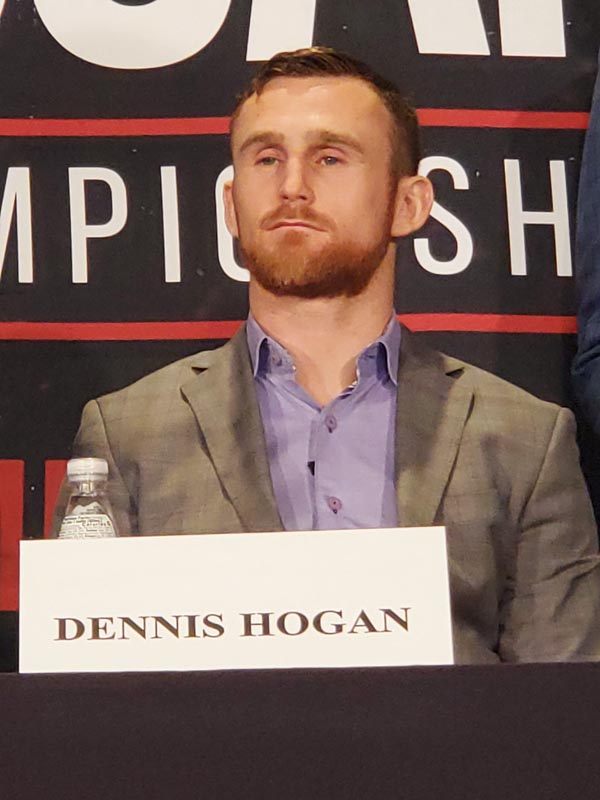 “I’m one of the hardest workers in the sport. Anyone who trains with me, knows that. I have laser focus on that belt and I believe that it’s mine.

“Five years ago I was told super welterweight was the weight to campaign at. At that point I was the light heavyweight champion of Ireland. But as I went down in weight, that knockout power seemed to leave me. That last bit that I won’t need to drain for this fight will be all the difference and all I need on December 7.

“I’ve always been heavy-handed, but I think the power will be back. I have the speed of a welterweight, the agility of a 154-pounder and the chin of a heavyweight. When you put it all together, this is going to be a great fight. 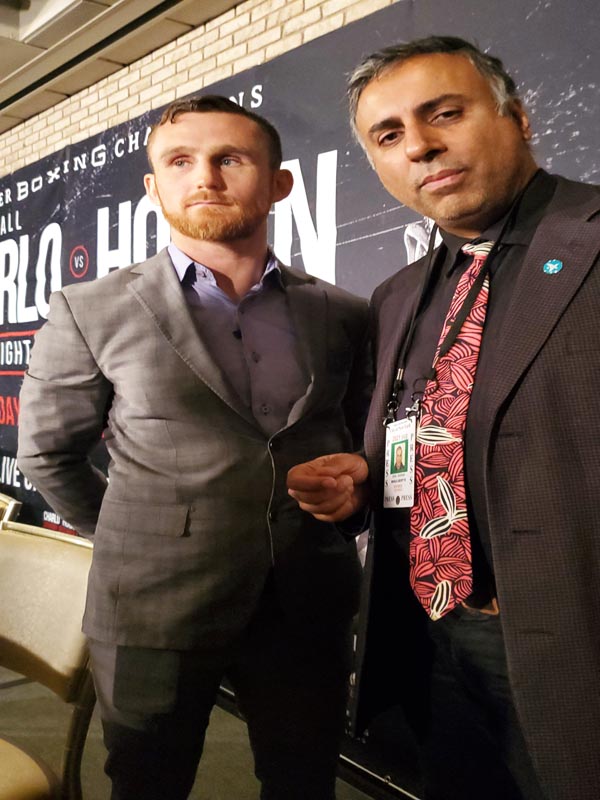 “I’ve visualized myself wrapping the WBC title around my waist for years, and that dream has become manifest. I will wear that belt around my waist and paint the town green afterwards.

“I know that I’ll have big support at the fight, but I don’t rely on it. I know Charlo is a great fighter. But for me, this has nothing to do with him. This is about my destiny and my dream.

RONNIE SHIELDS, Charlo’s Trainer:  “Jermall is really excited as always to fight on SHOWTIME. When he fights in Brooklyn, he’s extra motivated to make Barclays Center his home. There are great fighters here in New York, but he’s put on great shows in the past and he’s looking forward to putting on an even bigger show next time.

“I’ve been studying Hogan on video. He’s a very determined fighter. He comes to fight. I thought he won the fight against Jaime Munguia. I can understand how he feels right now. But we have to show him something different. 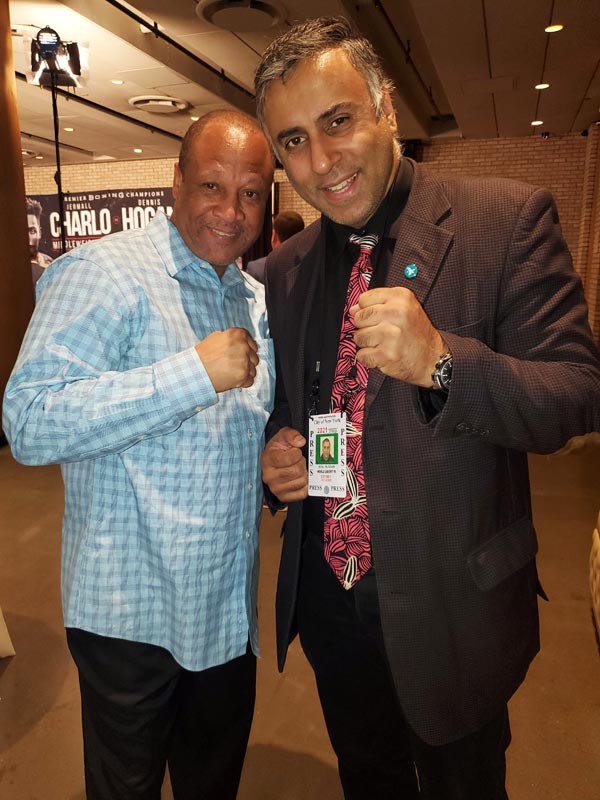 “We’re not planning to make this go the distance and have this be a close fight. We’re working on speed and combinations more than anything. I think you’re going to see a little bit different Jermall than from his last fight.

“We all have dreams, Dennis Hogan has dreams, but Jermall turns dreams into nightmares.”

PAUL KEEGAN, CEO of DDP Sports & Hogan’s Promoter: “We’re extremely excited to be here in New York with Dennis. We want to thank Jermall for this opportunity. We’re confident coming into this fight. 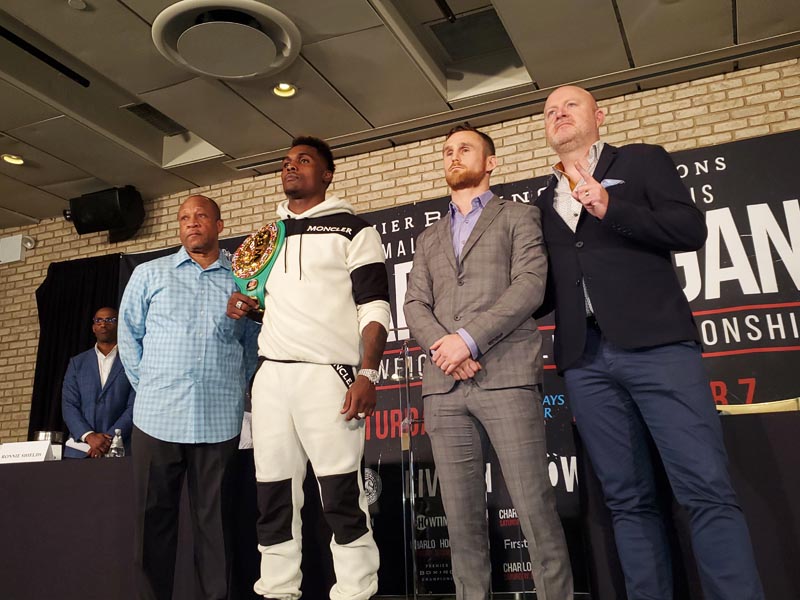 Boxers with there Trainers and promoter

“We took this opportunity because not one 154-pounder would fight Hogan. After his last fight, our options were limited. Once we saw the fight was offered, we said yes.

“We believe we have the uncrowned world champion in our camp. He’ll be strong moving up to middleweight. We’re excited to bring out the Irish contingent in New York and can’t wait to see them come out for this fight.

“We’re not coming here for a holiday. This is destiny. An Irishman is going to become middleweight champion in New York City and that’s our goal.” 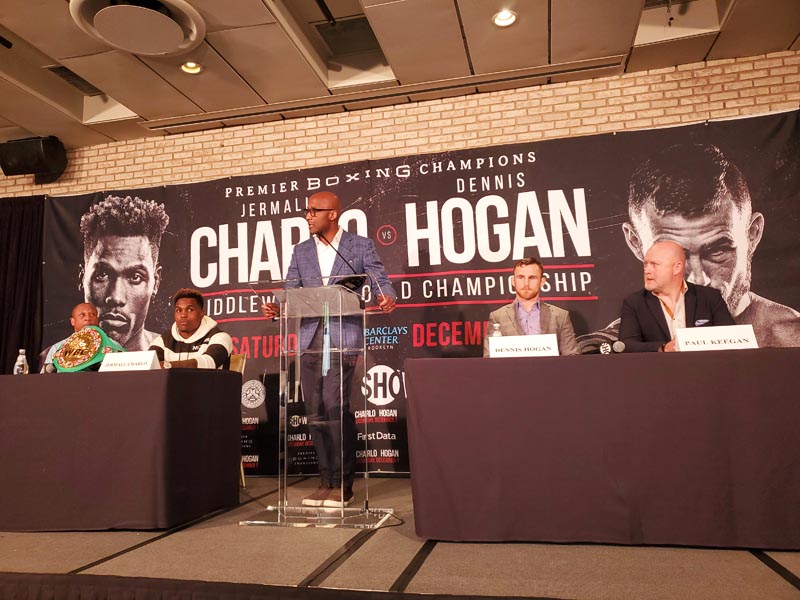 “As a fighter, Jermall is the complete package. Power, speed, athleticism and obviously an elite skill level. It’s no surprise that he’s one of, if not the most, avoided fighters in his division. 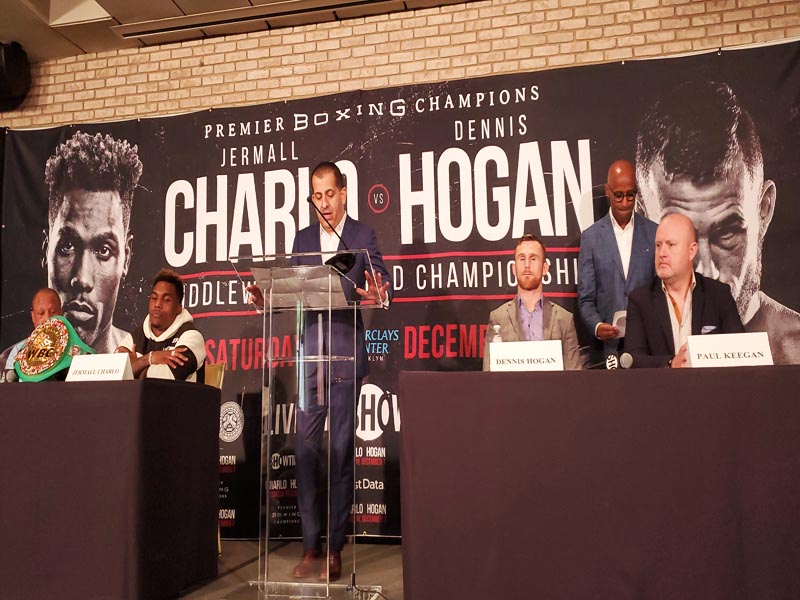 “Dennis Hogan deserves a lot of credit for stepping up to this challenge that many other fighters have not or would not. This is a tough, aggressive fighter. Many people believe he should be a world champion himself right now. If you look closely at Hogan’s two losses, he lost a decision to a German fighter in Germany and he lost a decision to a Mexican fighter in Mexico. Personally, I don’t believe he lost that fight in Mexico.

He’s not afraid of a challenge or to go into somebody else’s home turf. He says that moving up from super welterweight to middleweight is going to make him much stronger than he’s been in the past and there’s no doubt he will be bringing a very vocal contingent of Irish fans with him. 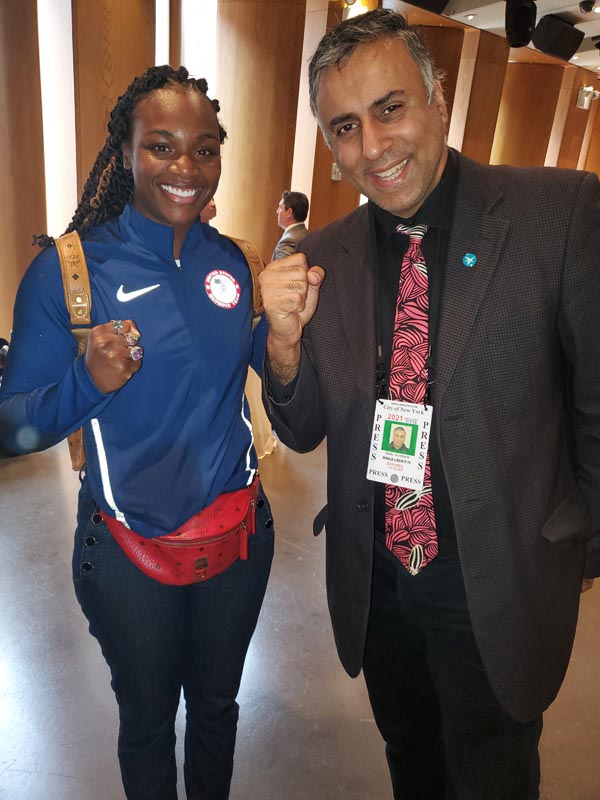 “This is a very intriguing mix of styles and personalities here and we will have a very strong, very interesting co-feature which we will be announcing in the coming days. December 7 is a night not to miss.”

See more about boxing in our World Liberty TV, Boxing channels and blogs by clicking here.