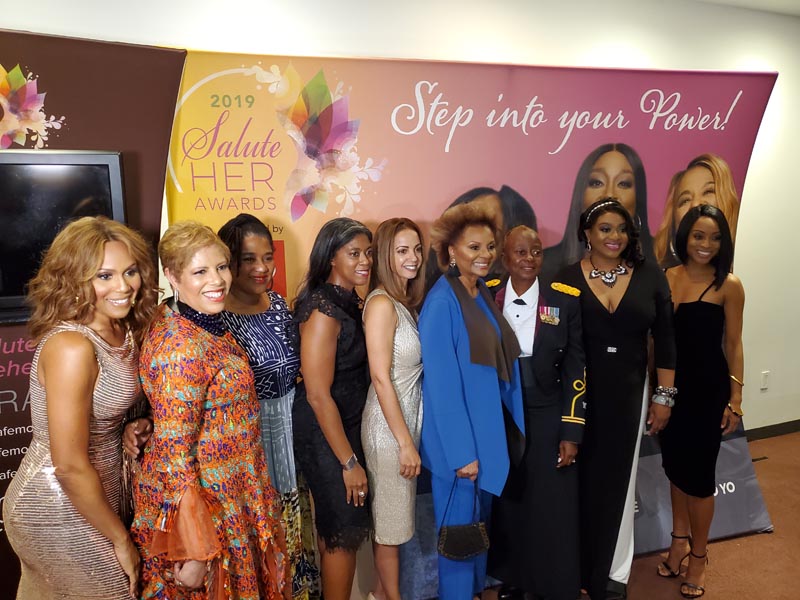 The star-studded event distinguished itself, competing with other New York theater celebrations held the same evening. Throughout the celebration, presenters and honorees offered stories of fortitude, perseverance, and inspiration that enhanced the spirit of unity and achievement.

“I am so honored to be in this company, it means a lot to me,” noted veteran stage, screen, and TV actress and recording artist Leslie Uggams, who remarked upon the changes she’d seen in her seven-decade career, including the impact and power wielded by stage and screen star Ethel Waters and how a TV talent show Uggams competed in as a child was rigged against her.

“Women have power. Back women are finally getting our voices heard out there. This reminds me of how much we have to offer, how much we can accomplish, how much more we can do when we lift our voices, and we work hard together. The late Shirley Chisolm famously said, ‘If they don’t give you a seat at the table, bring in a folding chair.’ So today I’m saying, let’s build our own table!” 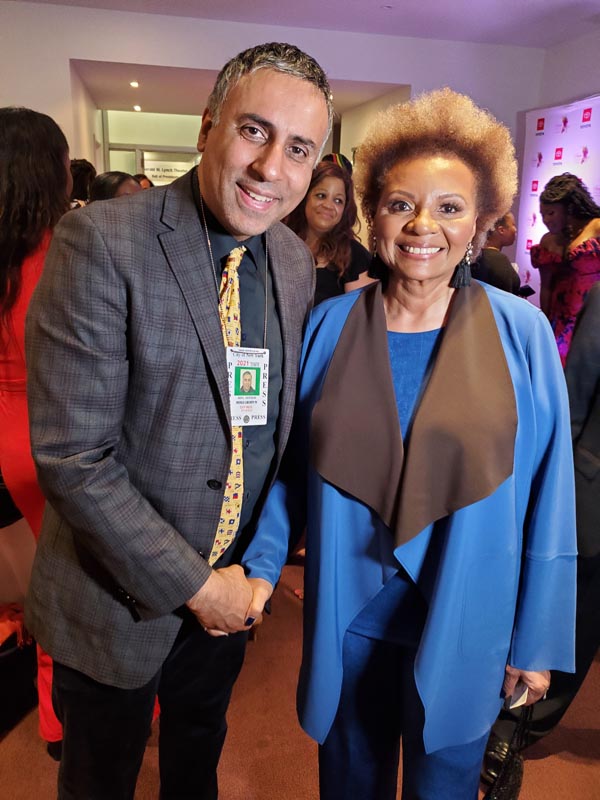 Director’s Award honoree LaTanya Richardson Jackson, who was raised in Atlanta, stressed the important legacy of the women of the civil rights movement and made an appeal for their stories to be told, so history is not forgotten. The actress and activist, currently starring in To Kill A Mockingbird on Broadway, also spoke about the significance of the Café Mocha Salute Her event. 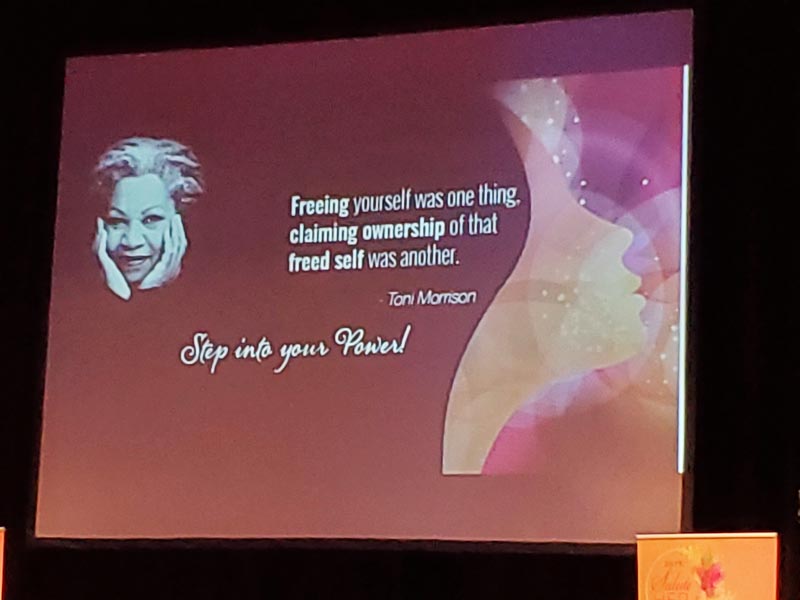 “The American Theatre Wing, of which I am a trustee is having their gala tonight,” she said, naming a number of other African American theater and business professionals who customarily attend. “But we chose to be here tonight. That’s how important what you’re doing is; because you let us know we matter. And we have to let ourselves know we matter. 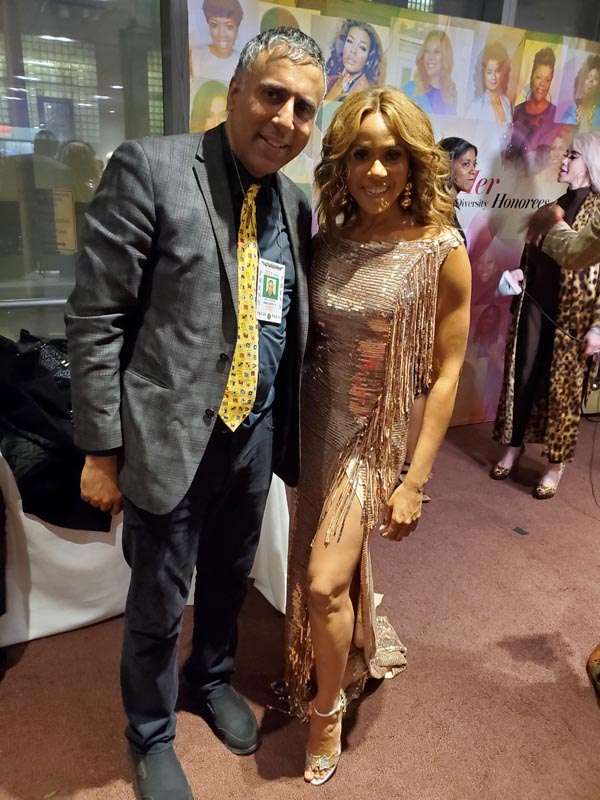 So, all of those women, especially the civil rights women, who a lot of you and a lot of our people don’t know their names — my grandmother who cooked for all of the people during the civil rights movement — we have to think of them when we move around. When Lynn Nottage is writing her plays which she does so well, she reminds us who these women were. 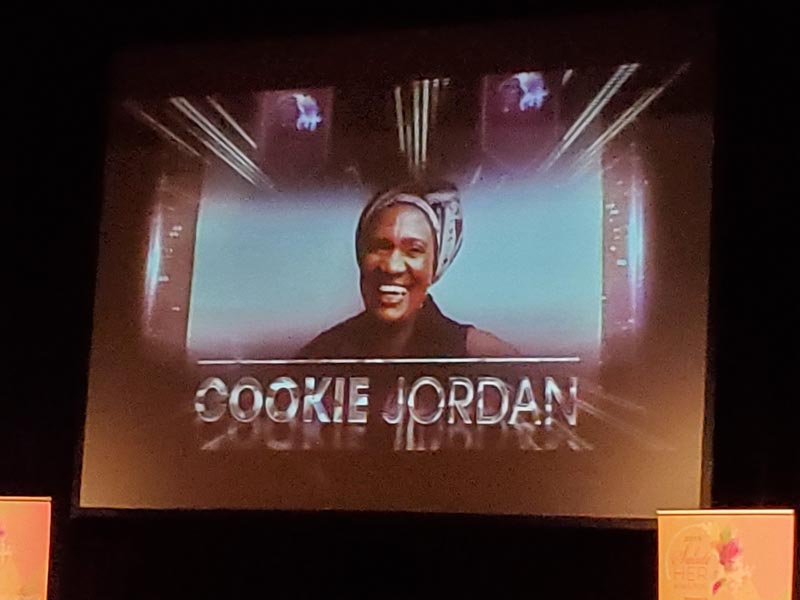 Honoree Dr. Indira Etwaroo, Executive Director of the Billie Holiday Theater in Brooklyn, shared sobering statistics about the struggle of many African American arts institutions for funding within the white-dominated art world. “My dear brothers and sisters, we were not brought to the shores of this place called America to survive, let alone to create and to tell our stories. And if we were never meant to survive, then our institutions weren’t either,” she explained. “I stand here on behalf of the more than half a million central Brooklyn residents, the largest community of people of African descent in the nation, who look to the Billie Holiday Theater to tell our stories, understanding that our story is the American Story. 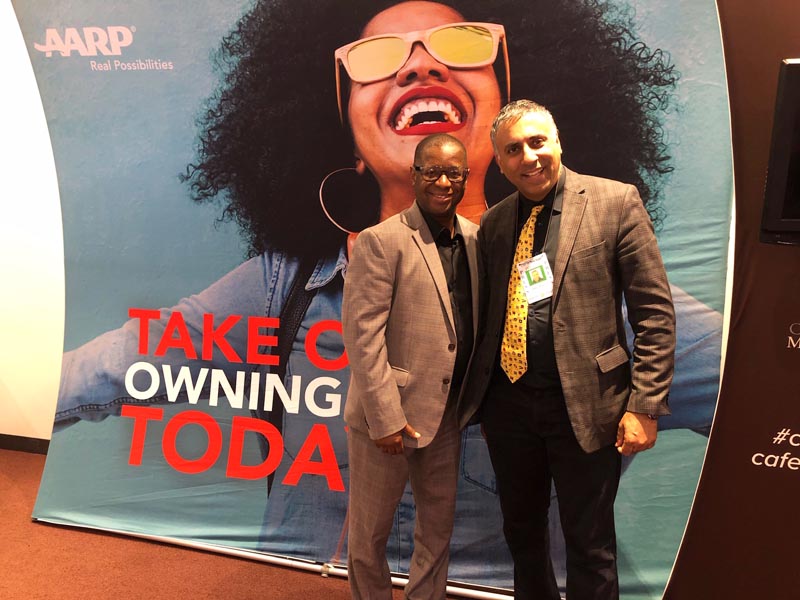 Our season celebrates the triumph of the African American experience during this 400th commemorative year of slavery. Everything we put on the Billie stage reinforces our commitment to storytelling, for, by, about, and near people of African descent. My journey is and has always been about building something beyond my own lifetime, building an institution that will be passed down to our daughters and our sons, knowing that these sacred spaces will continue to announce to the world, in the words of our sister Maya Angelou, ‘bringing the gifts that our ancestors gave, we are the dream and the hope of the slave, we rise. 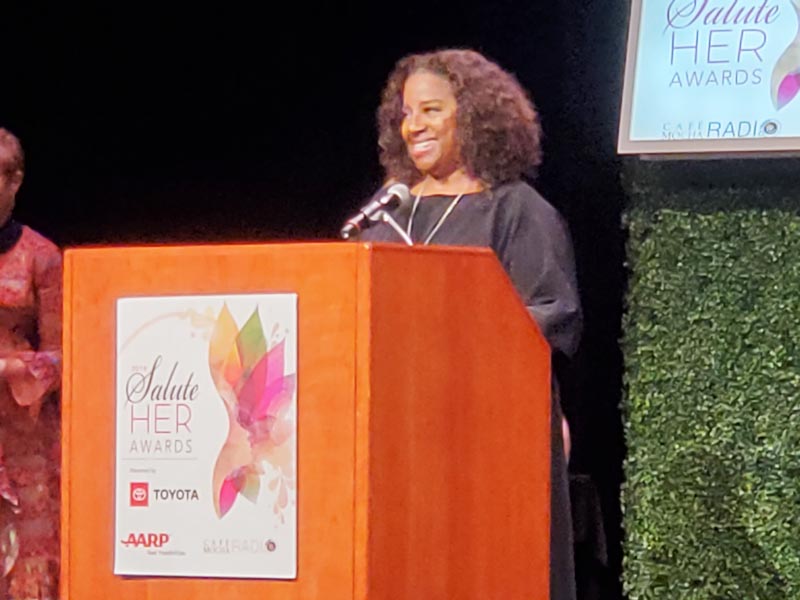 Alia Harvey-Jones, recipient of the Broadway Producer Award and producer of the current Broadway smash Ain’t Too Proud: The Life and Times of the Temptations, noted, “I’m proud of the mission of Front Row Productions to bring not only actors to the stage, but also playwrights, directors, designers, management, investors, stagehands, and production teams of color, to what has traditionally been known as the Great White Way…Every ticket you purchase to a Broadway show is supporting over 150 jobs in theater. Women are buying 70 percent of the tickets to Broadway shows.” 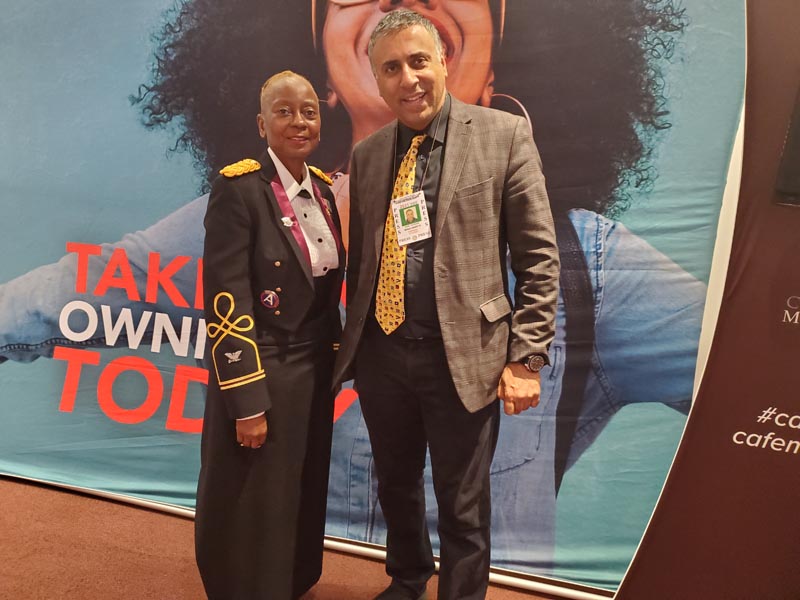 In addition to honoring theater professionals, this year’s Café Mocha Salute Her Awards continued its tradition of honoring local sheroes. This year’s Toyota American Prize Award was presented to Col. Annette Tucker Osborne (Retired), who is an Iraq Afghanistan Veteran and the Brooklyn Chapter President of National Association of Black Military Women. Presented by Alva Mason of Toyota USA, Osborne shared parts of her heroic journey through the armed forces. 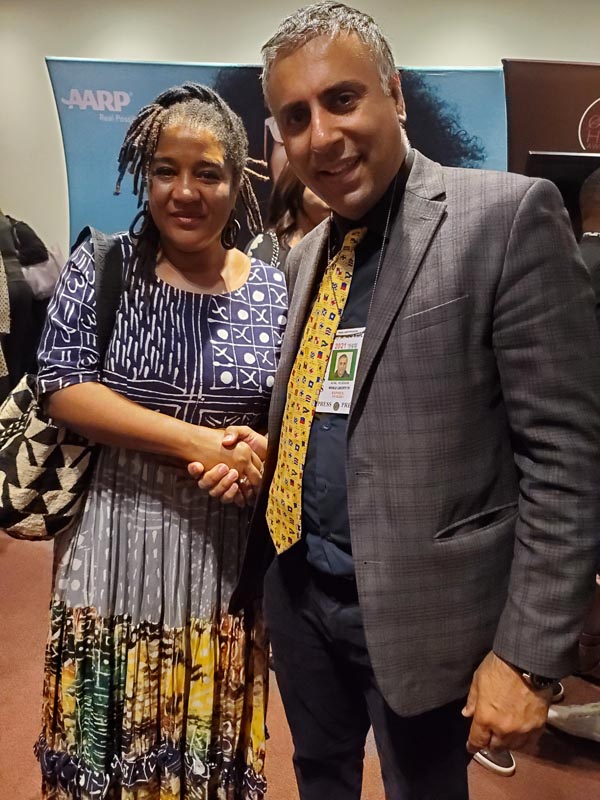 The 2019 Nominate Her Award went to Victoria Roberts, who had been nominated by her community and was not aware that she would receive the award that evening. Currently the Nassau County’s Re-Entry Task Force Coordinator, Roberts was chosen from more than 200 nominees from the Tri-State area and was honored for her work with formerly incarcerated men and women coming home from State prison.

Once imprisoned herself, Roberts has dedicated herself to helping former felons make successful transitions. Surprised and humbled by the honor, Roberts explained, “I have worked with individuals who have spent between two and 47 years in prison. Due to a glitch in the system, I currently work with a man who was in solidarity confinement for six consecutive years before he was released.” Roberts also noted that she developed a writing program at Hofstra University in Long Island, New York, that is designed to enhance the empathy skills of criminology students who are studying to work in law enforcement. 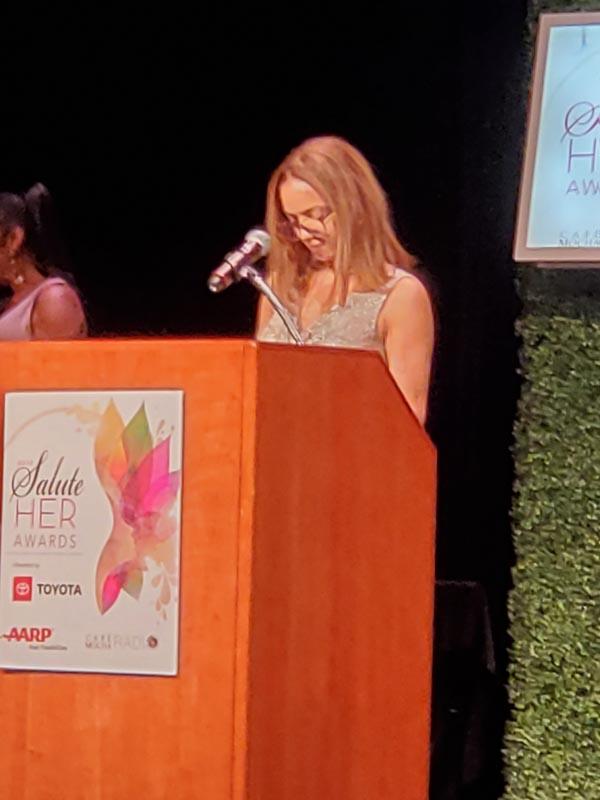 Sheila Eldridge, creator and executive producer of Café Mocha and the Salute Her Awards, noted how far the celebration had come within nine years and expressed her thrill at celebrating black women within the theater community and profound gratitude to the event’s corporate sponsors Toyota, Sisters from AARP, Luster Pink, and American Airlines. 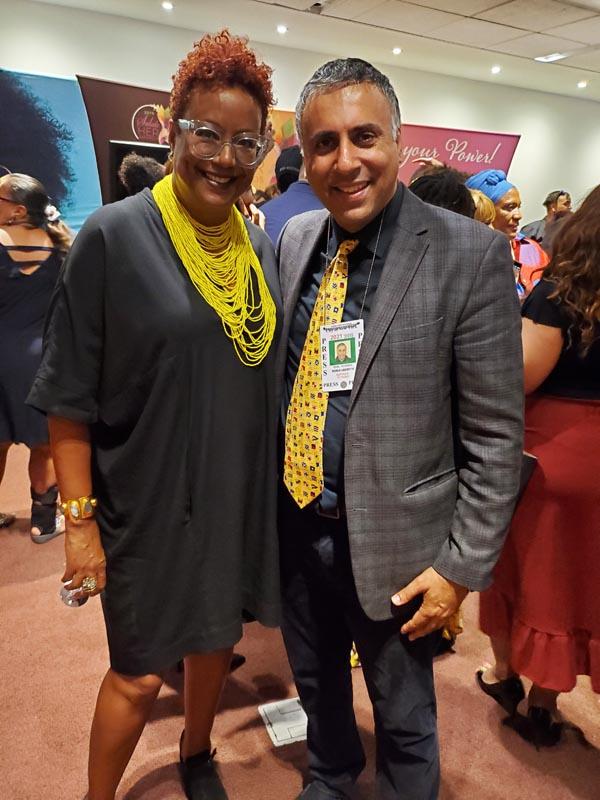 “Every time I get the pleasure to take this position and look out and see supporters and friends and women who believe in women inspiring other women and helping to make this dream come true, I say thank you so much. We started here in New York City at the Malcolm X and Dr. Betty Shabazz Memorial Educational Center; it was with 50 people and WBLS, and whoever would have thought that in nine years we would grow to this?” 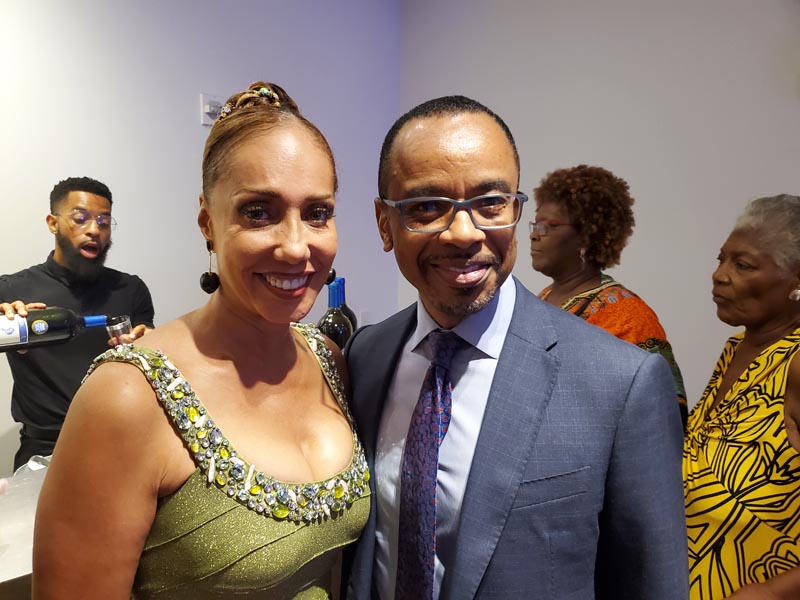 Musical entertainment was provided by Grammy-nominated recording star and actress Deborah Cox, accompanied on piano by Joseph Joubert, a noted theatrical composer, arranger, and musical director, who performed “Easy As Life” from Broadway’s AIDA and “I Will Always Love You” from the national tour of The Bodyguard. Acclaimed stage and screen actress Lisa Arrindell set the tone for the festivities with a dramatic reading of Beloved, honoring the late Pulitzer Prize-winning novelist Toni Morrison. 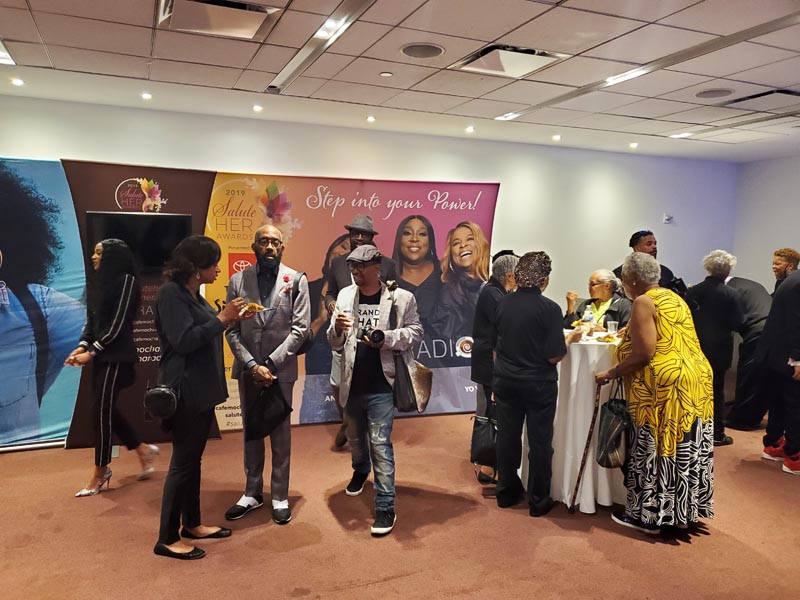 Since 2011, the Salute Her Awards Tour has honored more than 175 women from well-known figures to frequently under-recognized honorees for their contributions. Presenting corporate partner Toyota shares their mission as presenting sponsor for the last three years. 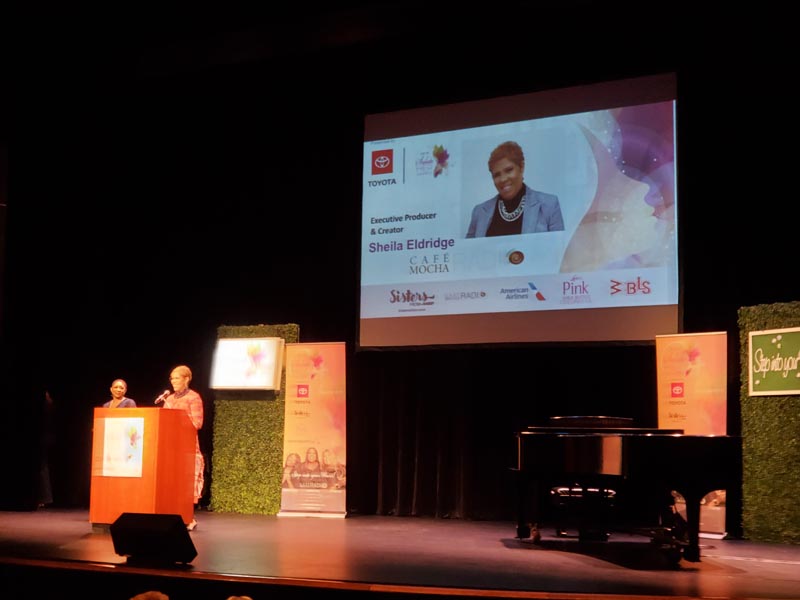 Through the Salute Her ‘Nominate Her’ initiative, supported by returning sponsor AARP, New sponsors American Airlines and legacy black hair care brand Luster Pink Products have come on board to make this year’s Salute Her Awards Tour even more spectacular. American handles the all-important skies, flying in the Nominate Her honorees.