Senator Manny “Pacman” Pacquiao, boxing’s only eight-division world champion, will end his two-year hiatus from a U.S. boxing ring when he returns to Las Vegas to defend his World Boxing Association welterweight world title against former four-division world champion and must-see attraction Adrien “The Problem” Broner. The Pacquiao vs. Broner world championship event will take place Saturday, Jan. 19 at the MGM Grand Garden Arena. Pacquiao vs. Broner and its co-main event fights will be produced and distributed live by SHOWTIME PPV and presented by Premier Boxing Champions beginning at 9 p.m. ET/6 p.m. PT. 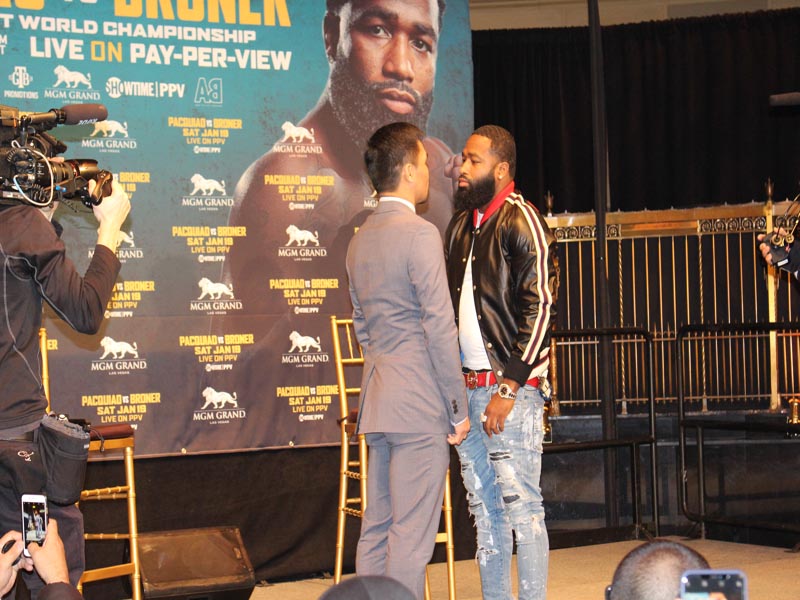 Pacquaio is coming off a vintage performance in July where he stopped Argentine slugger and world champion Lucas Matthysse inside seven rounds. Now, Pacquiao returns to the U.S. in his remarkable fourth reign as welterweight world champion. Broner, one of the most talented fighters in boxing, is aiming for his second stint as 147-pound champion. If victorious, Broner also will add a career-defining win against a future Hall of Famer to his already stellar resume.

“I have missed fighting in Las Vegas. It has been a second home to me,” said Pacquiao. “Returning to the MGM Grand Garden Arena to defend my world title against Adrien Broner is an exciting way to stage my homecoming. Adrien is a tough opponent with an accomplished record. But if I have learned one thing while serving in the Philippine Congress and Senate, it is problem solving.” 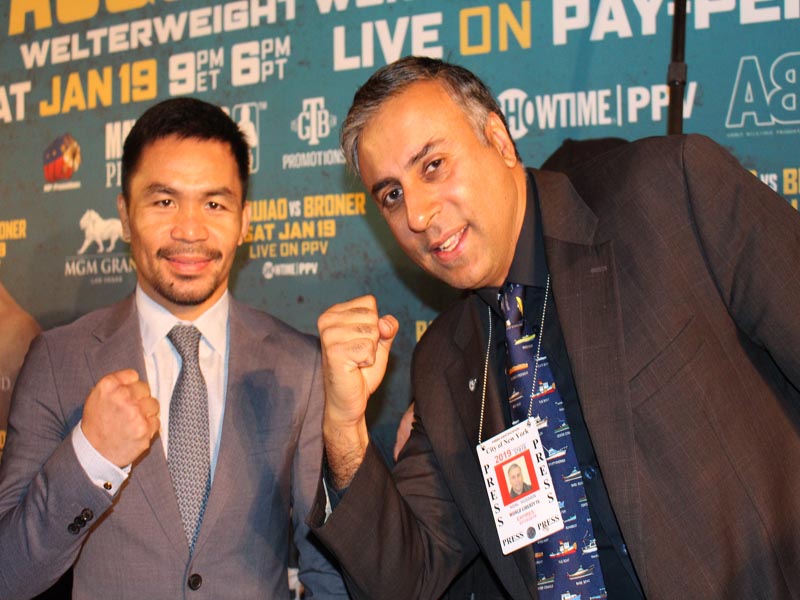 Broner said, “I have paid my dues in this sport, and now it’s time for me to get mines. I get more views than everybody when I fight. A lot of people are going to see me pack off Pacquiao into retirement, and without his belt.”

Promoted by MP Promotions, Mayweather Promotions and TGB Promotions in association with About Billions Promotions, tickets to the Pacquiao vs. Broner welterweight world championship event go on sale Saturday, November 24. Tickets are priced at $1,500, $1,000, $750, $500, $300, $200, $100, not including applicable service charges, and can be purchased online . 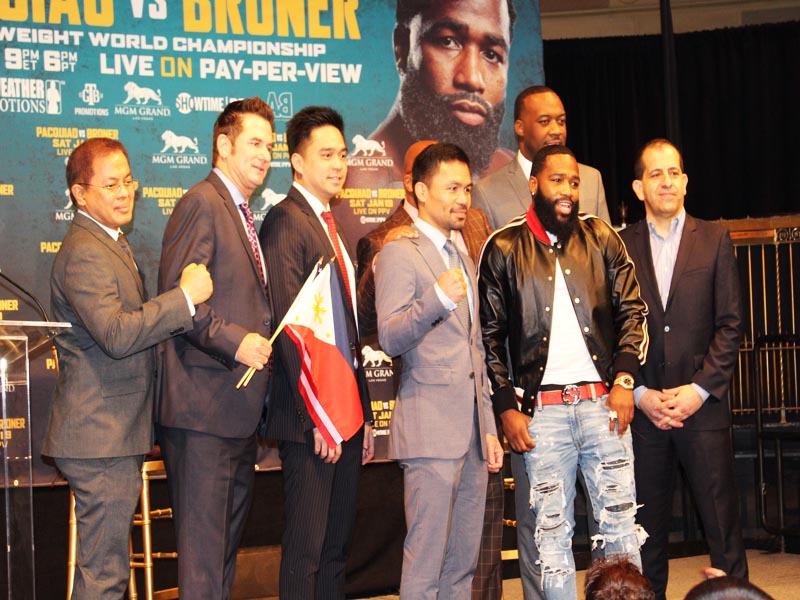 “Manny Pacquiao and Adrien Broner are two of the most gifted athletes in boxing today,” said Stephen Espinoza, President, Sports and Event Programming, Showtime Networks Inc. “Both men throw punches with eye-opening speed and carry significant power in both hands. These attributes have made them two of the biggest draws in the sport. Pacquiao is a proven pay-per-view attraction, while Broner has consistently delivered many of the highest-rated boxing events on television. This match up promises explosive action from bell to bell.” 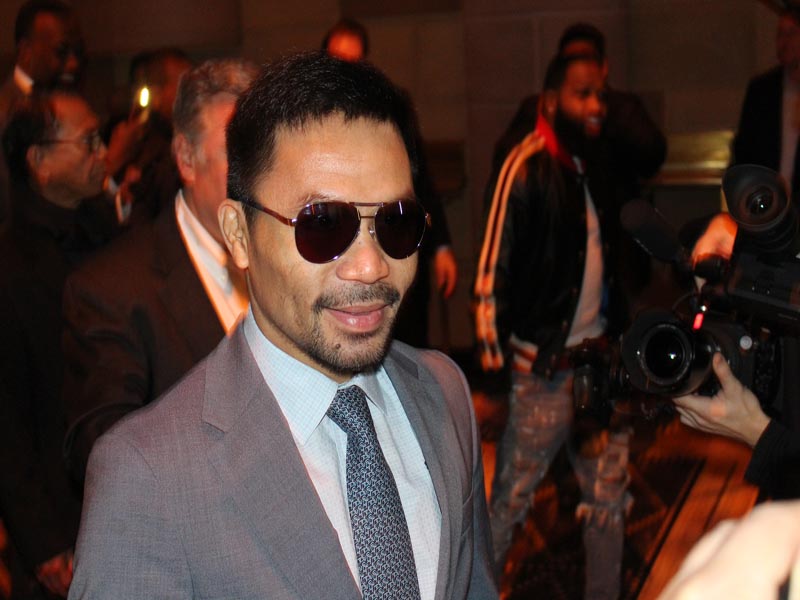 “MP Promotions is very excited about launching its new relationship with the PBC by presenting Senator Manny’s return to Las Vegas in the first defense of his WBA welterweight world title,” said MP Promotions head Joe Ramos. “Manny has a rich boxing history at the MGM Grand Garden Arena, and he will train hard to keep that title when he battles Adrien Broner on January 19. This will be another opportunity for Manny to add another highlight to his spectacular career and entertain his millions of fans. But more importantly, to prove to the world that he still belongs in the pound-for-pound discussion. It’s going to be a great night for the sport.”

“Mayweather Promotions is looking forward to working with our co-promoters and SHOWTIME to bring this spectacle between Manny Pacquiao and Adrien Broner to the fans at the top of the year,” said Leonard Ellerbe of Mayweather Promotions. “This is going to be one of the biggest fights of 2019 with Broner looking to defy the odds and shut everyone up when he steps in the ring on fight night. Pacquiao has faced everyone top fighter in this era and is looking to add another signature win to cap off his historic career.” 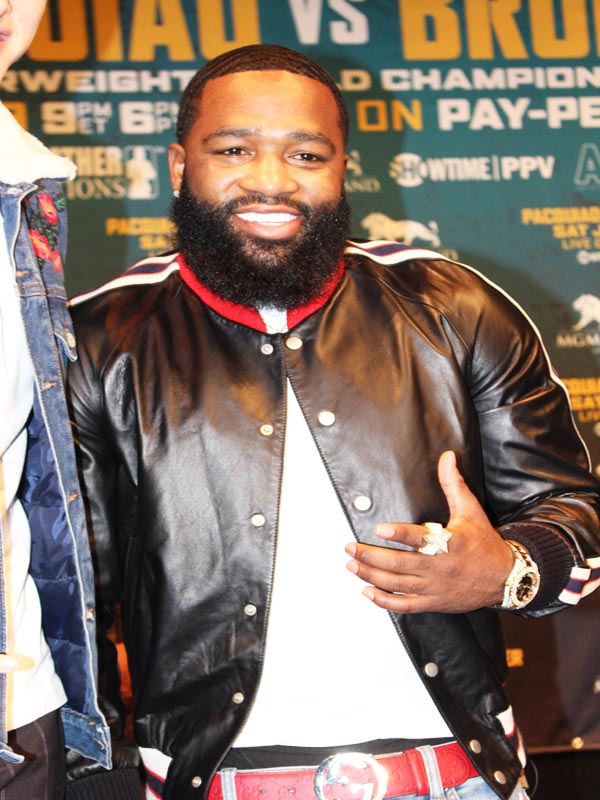 “This is an intriguing matchup between two highly skilled boxers who provide entertainment every time they step in the ring,” said Tom Brown of TGB Promotions. “Manny Pacquiao is an iconic future Hall of Famer with a resume that includes a Who’s Who of some of the greatest boxers of this generation. Adrien Broner has become must-see TV in winning world titles in four different divisions, and a victory over Pacquiao will move him back into the championship ranks and add luster to an already sterling career.” 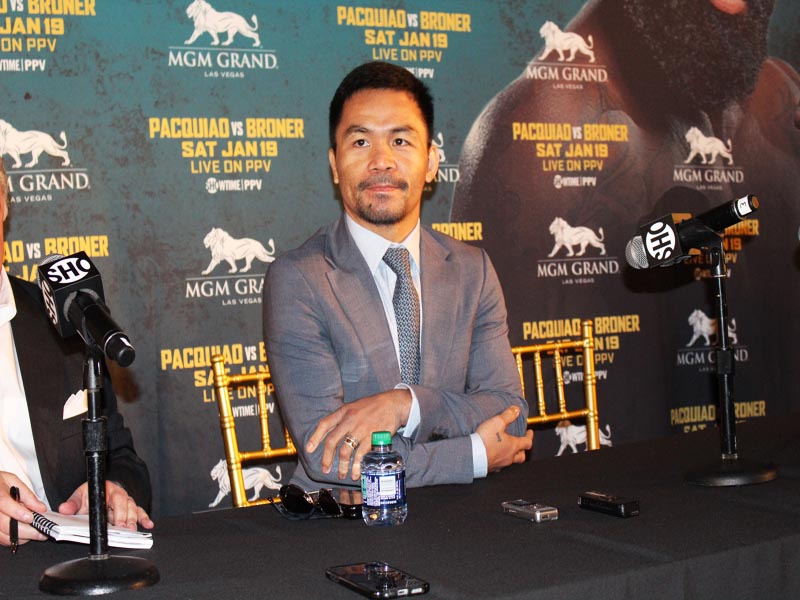 Richard Sturm, President of Las Vegas Live Entertainment and Sports for MGM Resorts International, said, “We are excited to host this championship fight at the MGM Grand Garden Arena which will kick off another great year of entertainment programming for MGM Resorts. This will be a terrific matchup between two great champions and we look forward to welcoming both of them back to the MGM Grand and Las Vegas.” 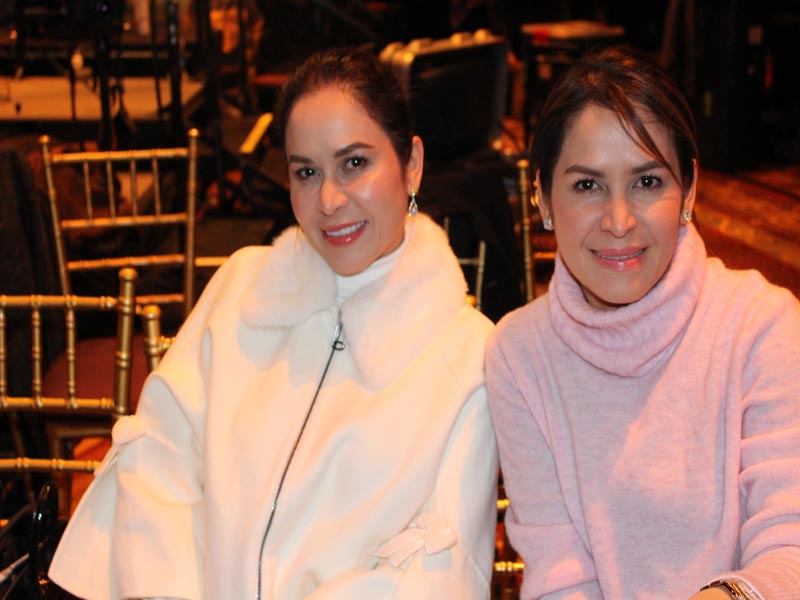 A three-time Fighter of the Year and the Boxing Writers Association of America’s reigning Fighter of the Decade, Pacquiao (60-7-2, 39 KOs), who hails from Sarangani Province in the Philippines, is the only sitting Congressman and Senator to win a world title. After serving two terms as Congressman, Pacquiao was elected to a Philippine Senate seat in May 2016, capturing over 16 million votes nationally. Pacquiao’s boxing resume features victories over at least seven current and future Hall of Famers, including Oscar De La Hoya, Ricky Hatton, Marco Antonio Barrera, Erik Morales, Miguel Cotto, Shane Mosley, and Juan Manuel Marquez. In his last fight, with Philippine President Rodrigo R. Duerte and Malaysian Prime Minister Mahathir Mohammad in attendance (the first time two heads of state attended a championship boxing event), Pacquaio, 39, regained the welterweight title for a fourth time with a vintage performance on July 15 at Axiata Arena in Kuala Lampur, Malaysia, by knocking out defending WBA champion Lucas Matthyssee in the seventh round.

Pacquiao recently had the high honor of speaking to the Oxford Union and the Cambridge Union on the campuses of the University of Oxford and the University of Cambridge, respectively, on consecutive days, another historic first in a career of historic firsts for the international sports icon. Pacquiao’s speeches about his life attracted standing room only crowds and huge ovations.

Cincinnati’s Broner (33-3-1, 24 KOs) is a former four-division world title holder and one of boxing’s most popular and colorful personalities. The brash and outspoken 29-year-old has faced some of boxing’s best en route to winning titles at 130, 135, 140 and 147 pounds, including Mikey Garcia, Paulie Malignaggi and Shawn Porter. Broner, who will face his 10th world champion in Pacquiao, scored a draw in his last fight in April on SHOWTIME against former two-division world champion Jessie Vargas. 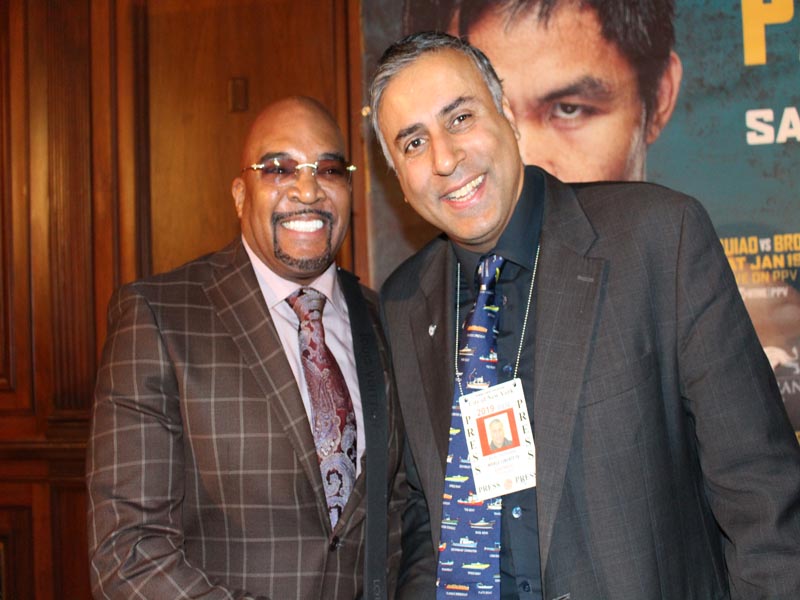 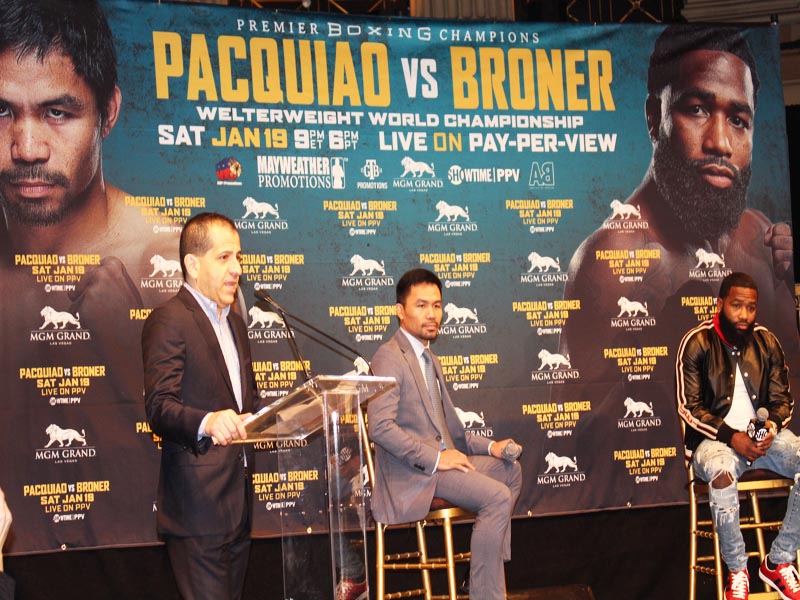 About MGM Grand Garden Arena: The MGM Grand Garden Arena is home to concerts, championship boxing and premier sporting and special events. The Arena offers comfortable seating for as many as 16,800 with excellent sightlines and state-of-the-art acoustics, lighting and sound. Prominent events to date have included world championship fights between Evander Holyfield and Mike Tyson as well as Floyd Mayweather vs. Canelo Alvarez as well as Floyd Mayweather vs. Manny Pacquaio; and concerts by The Rolling Stones, Madonna. 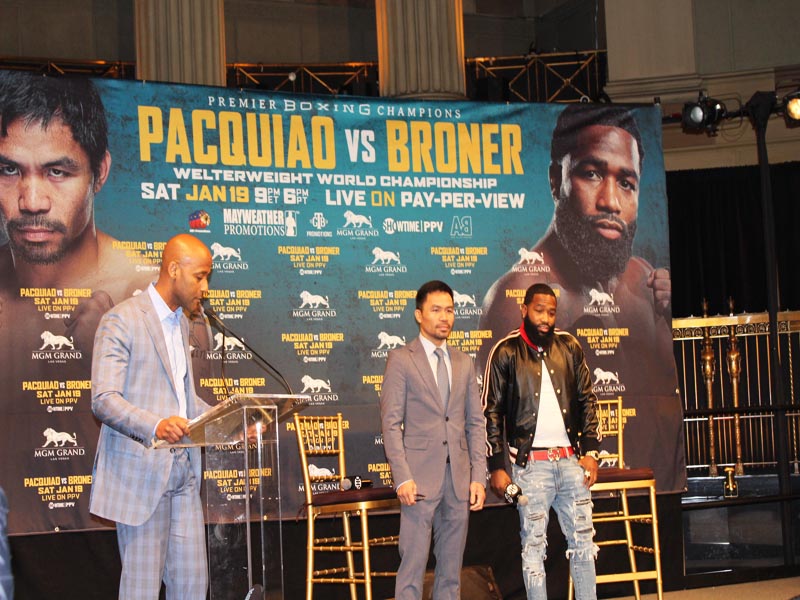 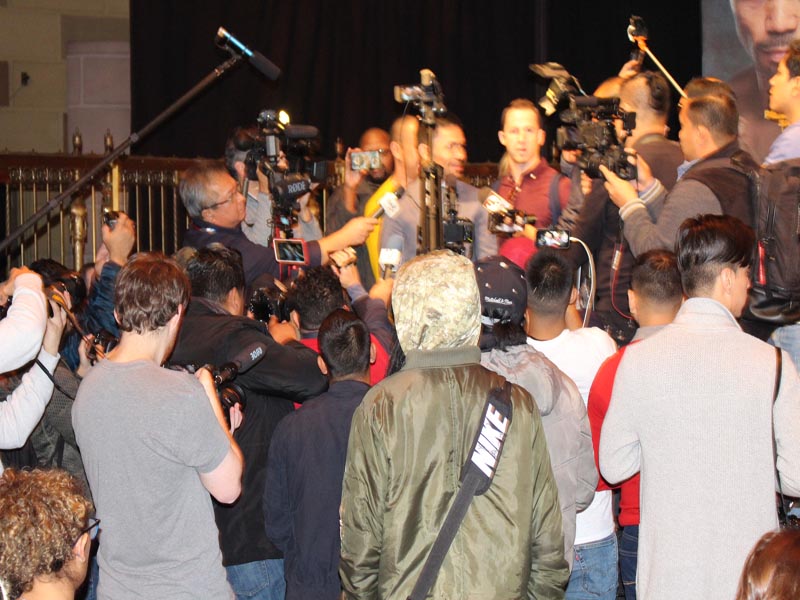 Hundreds of press members in attendance

See more about boxing in our World Liberty TV Boxing Channel and Blogs by Clicking here.